Restaurants come and go…Ayara Thai celebrates its eighteenth anniversary in 2022! Why? Because the food is exceptional. Customers keep coming back. It has survived the great recession, the Covid pandemic, lots of competitors and more.

Founded by Andy and Anna Asapahu in 2004, Chef Vanda Asapahu has taken over the reigns as Managing Owner  and continues Ayara’s legacy. For four years, Chef Vanda traveled extensively throughout her native country (Thailand), to cook with relatives, learn family recipes and keep up on trends in the Bangkok street food scene. She won the Rising Star Thai Chef competition and Ayara Thai received a Michelin Bib Gourmand. She was the first female Host Chef for the prestigious Masters of Taste food festival this year (2022), and produces her own product line of sauces as well as make-it-at-home cooking kits for Pad Thai, Thai Curry, as well as Tom Yum/Kha Soup. 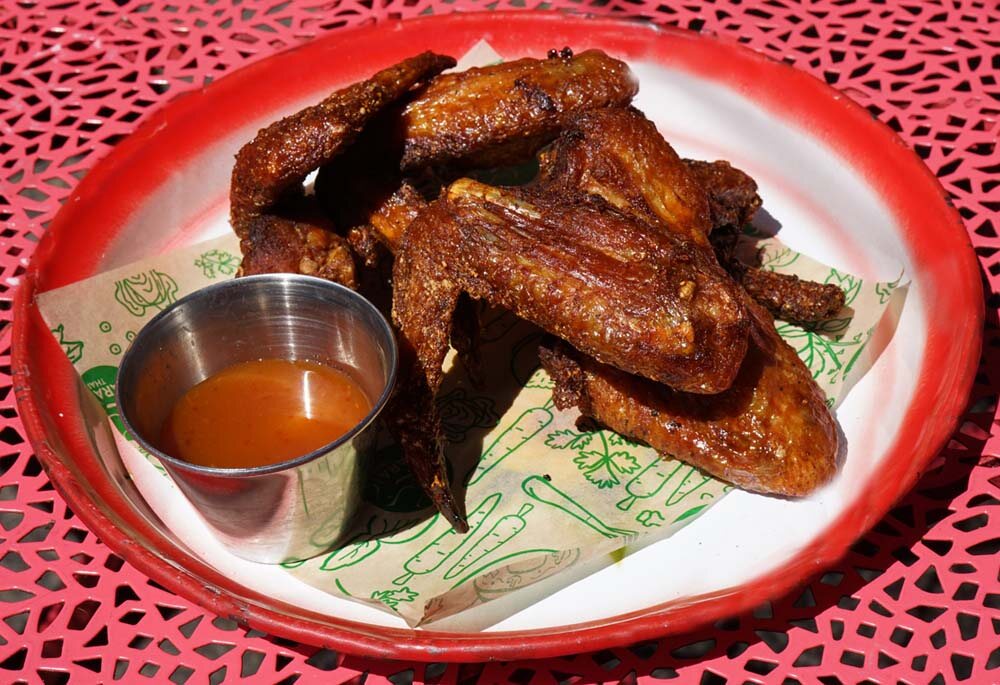 I have always been a fan of Thai food, so I was excited to dine at Ayara Thai which has a great reputation. We sat outside on the patio on a beautiful sunny day in Westchester, LA. Chef Vanda came out to greet us. She is clearly passionate about sharing her love of Thai food and culture, and offered menu suggestions. We enjoyed some margaritas (Thai Makrut) with a chili lime salted rim, and started off with the Muay Thai Wings. This unassuming appetizer featured a delicate crisp outside layer that encapsulated moist chicken meat which was infused with flavor, all perfectly enhanced by the subtle sweet tang of Ayara’s trademark bbq sauce. 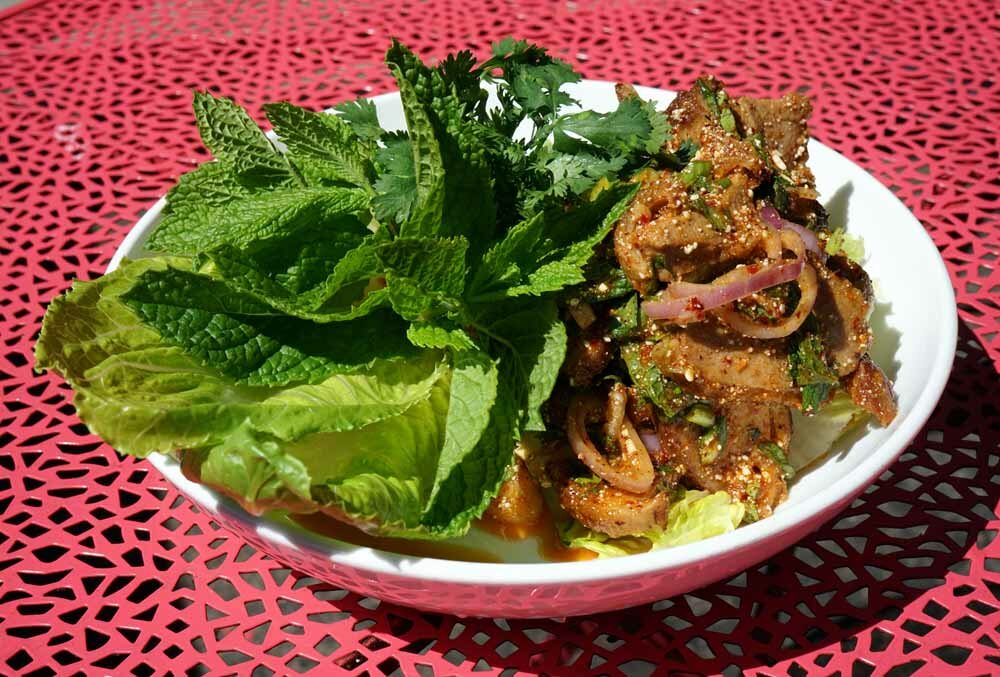 When looking at the menu, I questioned why the Laab Duck was listed under the salads, however when I saw the beautifully adorned duck surrounded with crisp greens, mint and sawtooth cilantro it all made sense. These delicate herbs held a major role in adding to the bright bold taste, along with another personal favorite of mine – lemongrass. Eaten as a lettuce wrap, it made for a great savory combination of spicy duck against the cool crisp romaine. It was out of this world. There was so much flavor packed in one bite…my taste buds were instantly activated. 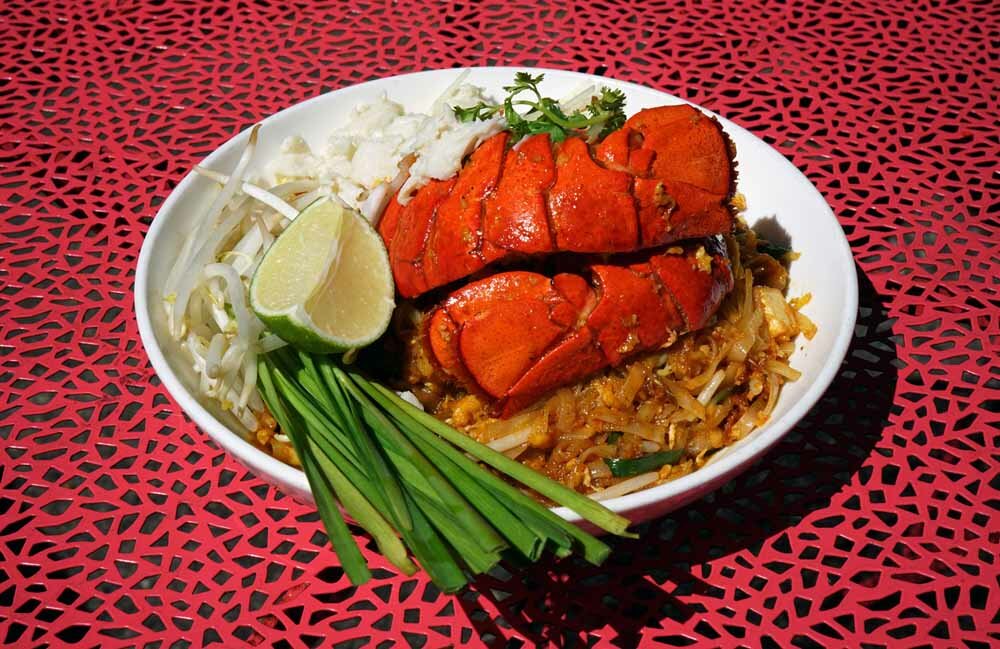 A stunning presentation of Lobster Pad Thai arrived at our table. Chef Vanda added a seasonal spin on one of her most popular dishes. A lobster tail bedazzled a mound of rice noodles, along with a beautifully arranged selection of bean sprouts, green apple slithers and scallion. The firm tofu and crunch of the peanuts added taste and texture amidst the noodles. This was a dinner highlight for sure. The lobster was cooked to perfection, and the sweet salty union of flavors melted in my mouth. 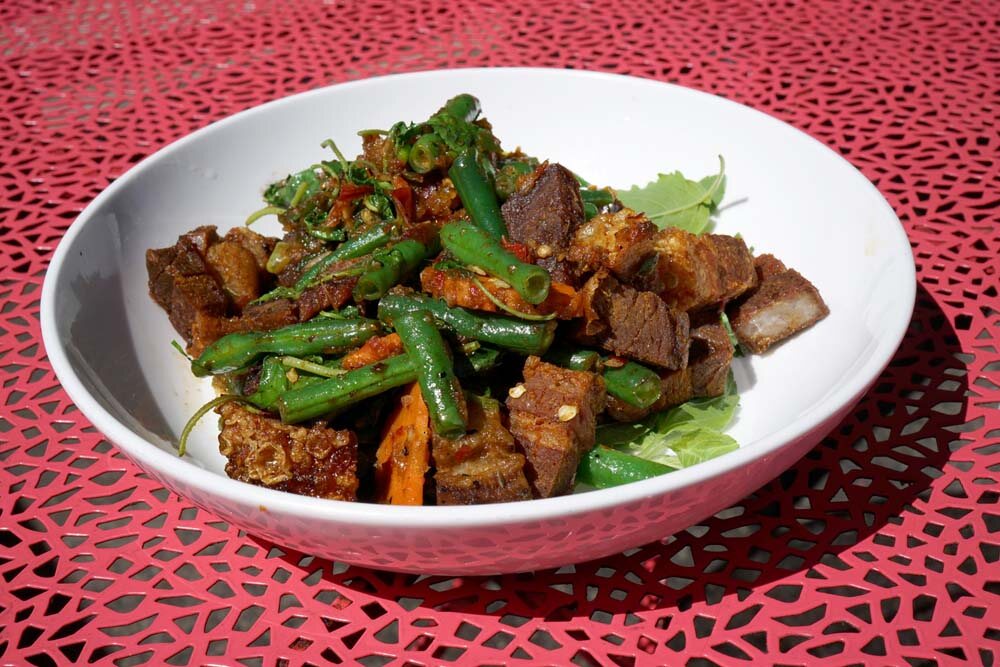 More beautifully adorned entrees were delivered to our table – the Spicy Basil (Pork Belly, Thai basil, chili, garlic, carrots and long beans) and the Chu-Chee Salmon Curry (poached salmon fillet glazed with creamy red curry coconut sauce with steamed veggies). The pork belly was crisp and bawdy. The green beans added a brilliant crunch as well as an eye popping visual to the dish. The Thai Basil had a kick of spice that left a memorable zing in my mouth. 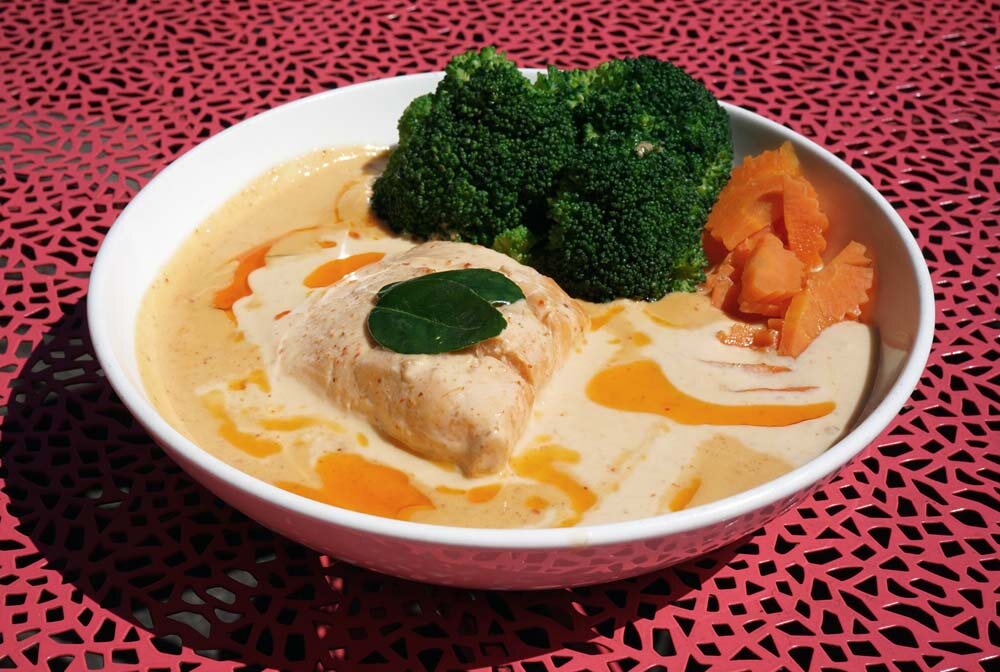 The perfectly cooked salmon fillet floating in a bath of luscious creamy red curry looked amazing. The steamed broccoli heads were the perfect vegetable to slather up that decadent sauce. The dish had a mild spice…which imbued a subtle layering of seasoning as it mingled with the sweet coconut cream highlighted in the sauce.

Dessert came as a surprise, but we just could not resist. The Mango Sticky Rice played on the pure taste of ripe Ataulfo mango with a delicious dairy-free coconut cream sauce atop sweet sticky rice. 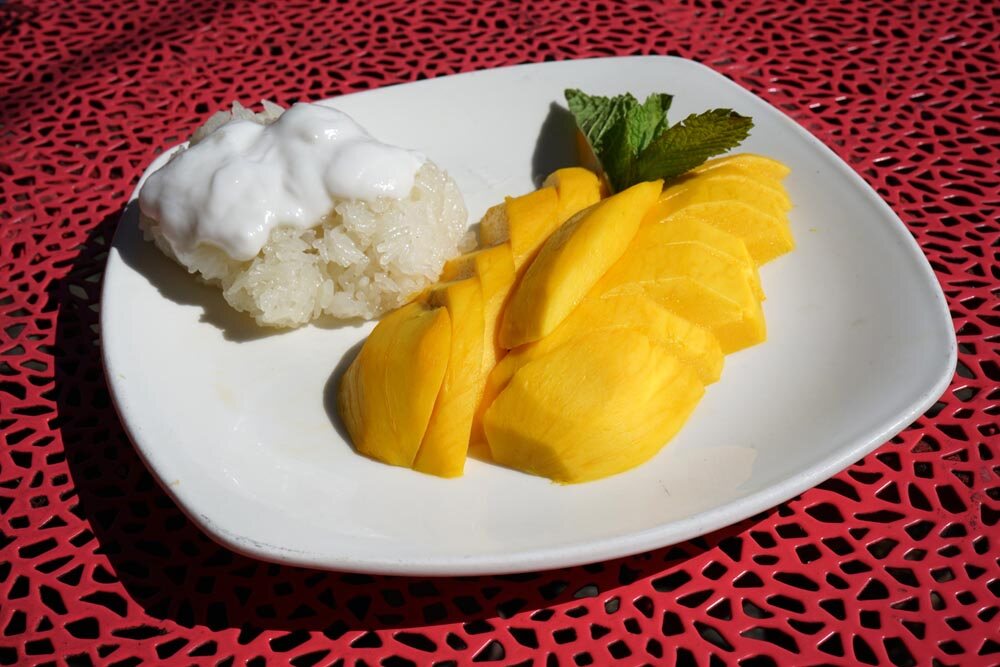 The simplicity was compelling, and the taste was superb. The Thai Tea Flan was what one would expect when ordering flan, except it was submerged in a pool of sweet light syrup adding to its delicate texture….so good.

All I can say is Ayara Thai is one of those hidden gems…no pomp and circumstance, just great Thai cuisine!! I will be dining here again for sure. I also purchased a Pad Thai kit and a peanut sauce…can’t wait to start cooking! FYI – the product line is available to ship to the 48 contiguous states.