Jeremy Kidd was raised in London, Bristol, Dorset, and Leicester. In 1986 he and his girlfriend arrived in New York on a whim to celebrate his birthday. His girlfriend suggested heading west would give them five additional hours to party. “I never looked back,” laughed Kidd. “I had fantasized about surfing as a young kid/Kidd. I had always wanted to surf in Malibu and idealized the Southern CA life style. I was already skating and surfing in the early 70s in St Ives Cornwall. I soon traveled West and was greatly inspired by the expanding Landscape!”

Q: What were your favorite parts of your road trip?
A: As I drove west from New York I was increasingly aware of the expanding landscape and simultaneous expansion of my consciousness; a wholly liberating breath filled my being and the sense of freedom began to permeate me. The further we drove west, the more the landscape opened out. As we moved from pastoral plains to the desert, the less the landscape resembled England and the English experience, and the more of a revelation it became. The Blue Ridge Mountains were a green, rolling velvet carpet of pines on a greater scale than I had ever seen. Arkansas was truly lush and vibrant with animal and plant life. Oklahoma was the first place that the terrain truly opened up and would mark the inception of the “experience.” But it was the deserts that really exemplified the notion of freedom. The vast desert expanses of Death Valley gave way to the jarring site of the snow-capped Sierra Nevada Mountains. I was shocked by the contrasts and extremes of the sublime. To still be in the parched furnace like desert plains and see snow way up high was, to date, the most extreme geographic event of my life. It was inconceivable to me that these extremes could coexist in the same vista, especially coming from England, where national temperature and geographies are so uniform. 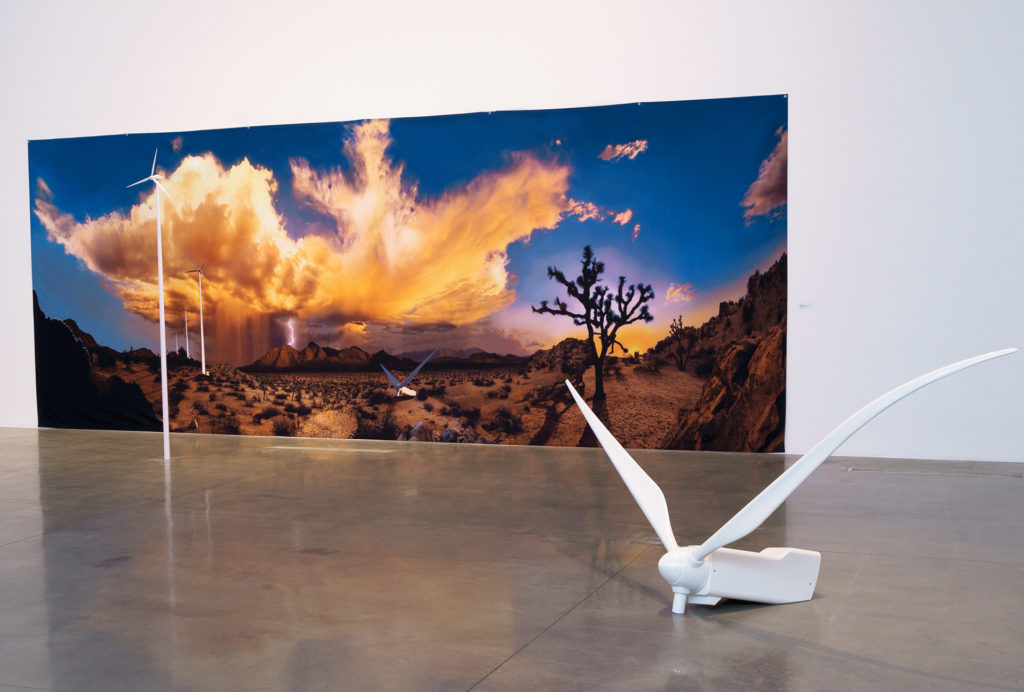 Q: Did you stop at the Grand Canyon?
A: Yes. Though the Grand Canyon was impressive, it was somehow expected. Perhaps because it was viewed from above and in so many publications, the impact was diminished compared to being surrounded by the buttes and canyons of Monument Valley, Arches National Park, Canyon Lands or the vast Lake Powell. In each of these cases, one experienced the vista from the ground up, surrounded by and imposed upon by the edifices. Here was the acknowledgement of one’s scale and transients in the face of such grandeur and geological time. And so when I rolled into Los Angeles via the 10 freeway and saw downtown rising from the haze, once again I experienced the imposing awe. It has since struck me that perhaps there is a relationship between the modern city and the landscape I had just crossed.

Q: Tell me about how you got started with digital photography?
A: I saw the potential of the altered photograph as a transformed slice of the objective. By altering the objective photograph, by playing with the pixels from the image in photoshop, I tease our perception of reality through manipulation and adaption, discovering a great opportunity to create surreal and other worldly works. Now of course we cannot believe or trust any still or moving images! Ultimately we need to look inside of ourselves for what’s truthful.

Q: Tell me about your transition from Film to Digital?
A: In the late 80’s early 90’s I’d been using Inkjet/laser copies and Xeroxes in my work. I covered those images in many layers of varnish and paint. These images were appropriated. The transition of film to digital capture has made the versatility of output substrates extraordinary.

Q: How did you come up with the idea to fuse photos together?
A: Desert to Palm (2004) was the 1st piece in the Fictional Reality Desert to Palm (2004) series and was catalyzed by a show at CIRRUS GALLERY called “Crazy Thoughts have Quick Wings.” Here the brief from the curator (Eve Wood) was to illustrate the poem Ariel by Silvia Plath. I was heading out to the desert and was impressed with drama and scale of the landscape and felt it related well to the poem (though this piece has been somewhat adapted). I found an old armchair perched atop a dusty mountain in Desert Hot Springs facing Mount San Jacinto. From there I surveyed the landscape and was struck by the prospect of trying to re-create the grand unfolding landscape with the inadequacies of a single photograph. It seemed quite obvious that I was going to have to use multiple shots to try and convey this scene in sight and sense. This I had done in the early eighties while at art school, when we had been given the brief to photographically record a walk in a park. I too was aware of Hockney’s wonderful pieces and was compelled to move a step further from those works, by choosing to painstakingly blend and meld together many of the shots onto a single piece. 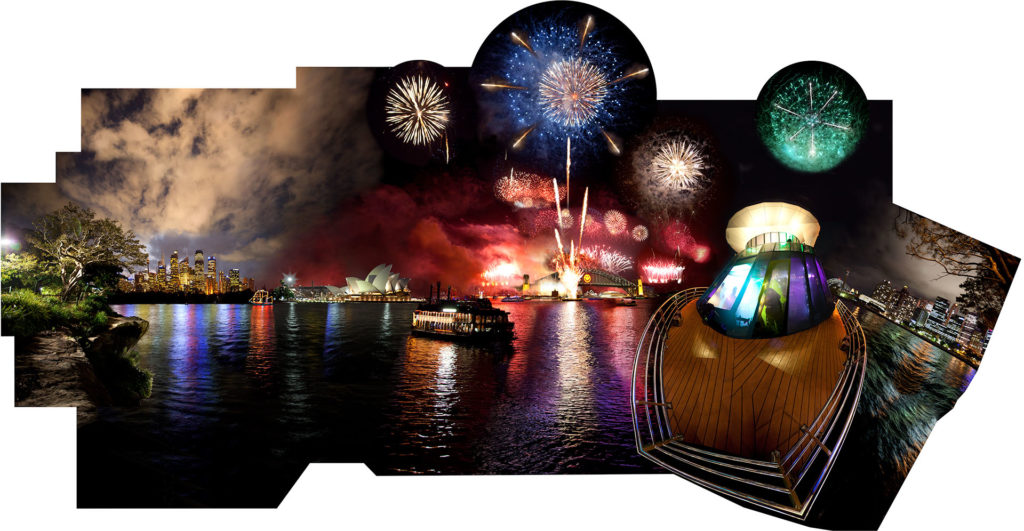 Q: What is your favorite destination in the world to visit and why?
A: I guess there are many places but in terms of an Ideal vacation paradise, Fiji and Australia. This is where I learned to dive, which led to the piece below that is the combination of twenty-six dives and countless images; including an ethical Shark Dive off the Barrier Reef. (We dove amongst the sharks while the food/bait was caged so they could not feed). The idea being not to let the sharks become dependent on an unnatural food source (there are about 10 sharks in the piece below). I was aboard a dive research vessel for six days. We worked with a marine biologist doing fish counts on each dive at the most northern end of the Barrier Reef. This was perhaps my most memorable trip!  The Islands around Fiji were gorgeous. There were so many. You could find a 20 minute 15, 10 or 5-minute Island to walk around, out of the two and a half thousand Islands. There are lovely people here. This was the first time I could see so many stars that I become aware of our position in the ring of the Milky Way. 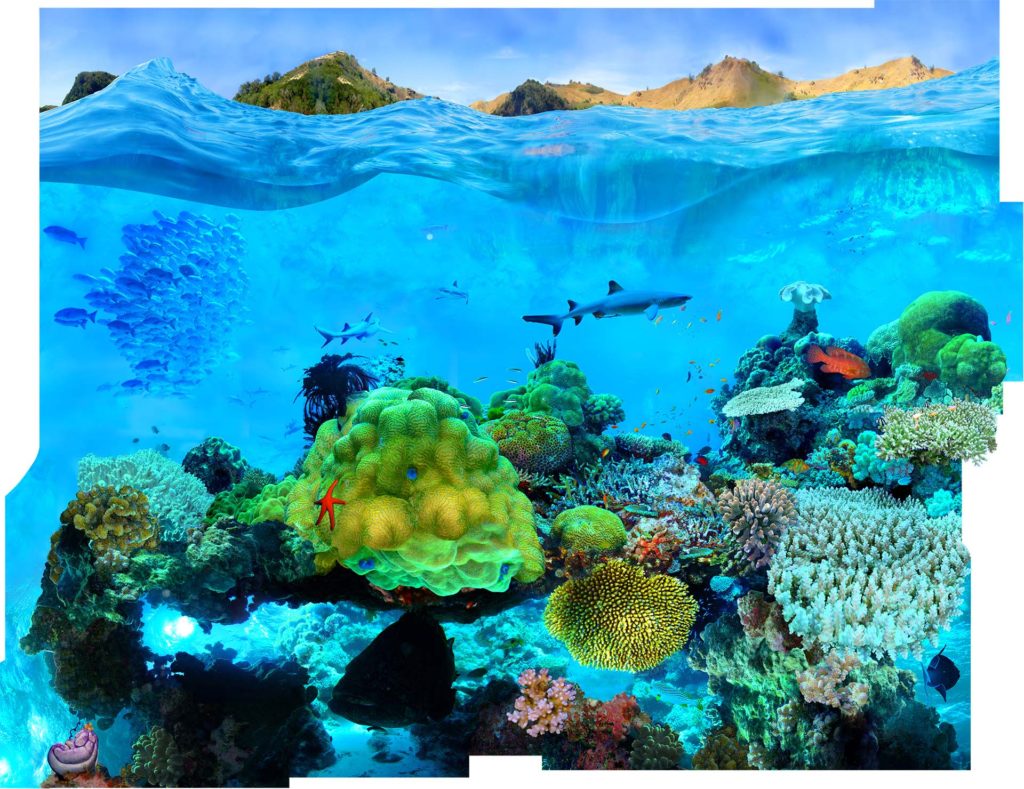 Artist Jeremy Kidd currently lives in Venice CA and is represented by Leslie Sacks Gallery at Bergamot Station. Find out more about his work “Temporal Excursions,” on his website – http://www.jeremykidd.com/