Hyde Sunset Kitchen + Cocktails is located in West Hollywood, just above the bustle of the Sunset Strip. The hotspot starts to stir after 9pm, attracting a later crowd for its California cuisine. Chef Chris Crary (the executive chef of Hyde Sunset Kitchen + Cocktails) started working for SBE two and a half years ago. We recently met at The Taste (an annual food event presented by the LA Times and CITI). He invited myself and my photographer to review his restaurant.

Then, the appetizers started appearing. Seared ahi tuna, was served with celery, radish, heirloom tomato, and avocado. The tuna was pink, its edges encrusted with ground sesame seeds. The fried chicken sliders on butter biscuit with mustard kimichi honey aioli were heavenly. Peach + Barrata sported an unusual combo – peaches and arugula with peach mustard, balsamic, and pretzel crouton. The Grilled Smoky Cauliflower offered a whole new take on the vegetable. The roasted tomatoes combined with salami aoli, walnut, and capers brought it to the next level. 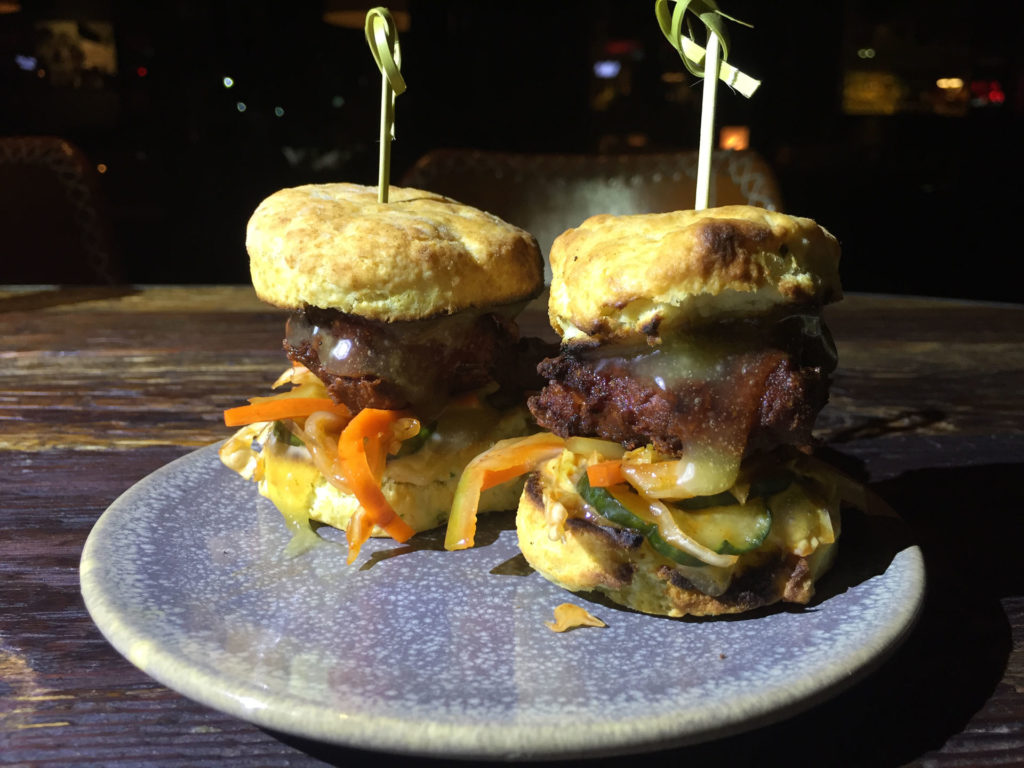 Then, Chef Chris brought out two of his most popular dishes. Torchio Bolognese is a basic chicken Bolognese, with parmesan…a simple dish with a big bold flavor. Obviously the highlight of the menu, I cannot give high enough praise about the Local Black Cod, which was beautifully placed on miso cauliflower purée. Kumquat and puffed rice were added accents to this dish. The cod was cooked perfectly, flaked to the fork, and simply melted in your mouth. 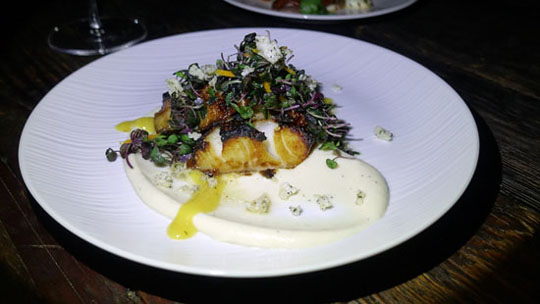 We were just about too full to eat dessert, but we managed to squeeze in a bit more. A chocolate coffee cake topped with almond crumble featured caramel sauce, chocolate pudding, and two luscious scoops of spiced strawberry ice cream. Chocolate chunks were randomly scattered on top of the dessert with sweet caramel dots. It was a beautiful marriage of mousse and coffee cake. From start to finish, it was an unbelievable meal.

Crary has a lot on his plate. He is currently overseeing the opening of two additional establishments – a night club called Nightingale Plaza and the James Hotel – all this with a four month old baby at home. Not sure how he does it all, but keep doing it Chef Chris – your cuisine is amazing!!! Hyde Sunset Kitchen + Cocktails, 8117 West Sunset Blvd., LA, 90046; 323 940-1650; https://www.sbe.com/nightlife/hyde/hyde-sunset