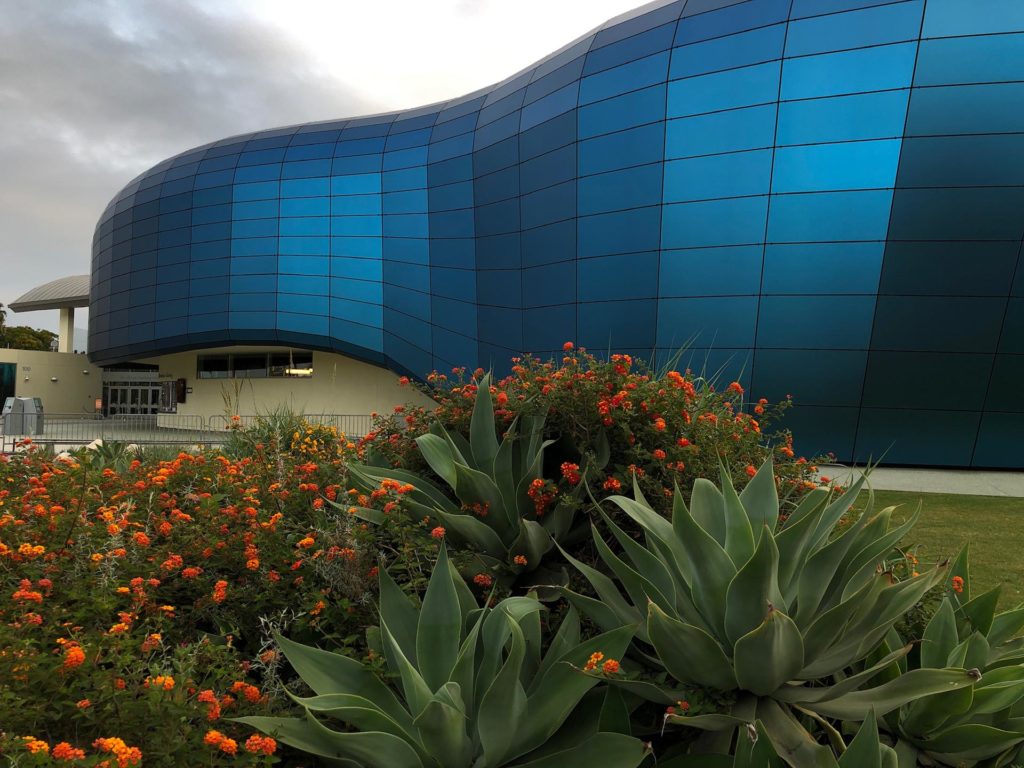 Pacific Visions, Aquarium of the Pacific; by Richard Bilow; courtesy of ETG

The hidden worlds contained within the earth’s undersea ecosystems have always been fascinating to me, which is why I became an aquatic artist over 25 years ago. Growing corals, creating aquatic installations and filming the coral reefs has been my life’s passion, so I was excited when I heard about the design of Pacific Visions, the new wing at the Aquarium of the Pacific. Learning how to live in balance with nature is critical to our survival, and Pacific Visions uses today’s technology in innovative ways to help visitors understand what is really happening and how we can help create a sustainable future. I highly recommend that everyone visit the aquarium, especially those of you with children. Plan to allocate a good part of your day, so you have time to experience everything available in both Pacific Visions and the Aquarium of the Pacific. 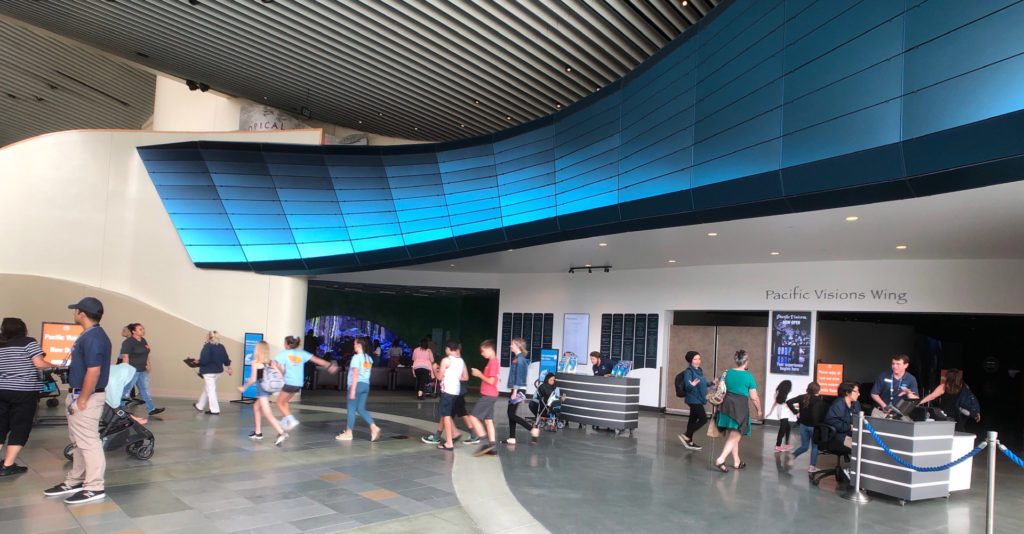 Pacific Visions is a multi-faceted multi-media exhibit center with several rooms, all housed in an extraordinary 29,000 square-foot, two-story building. Dedicated to helping visitors learn how to protect our planet, the new wing is a perfect complement to the original live exhibit section of the aquarium. While a few live exhibits are incorporated into Pacific Visions, numerous multi-media multi-sensory interactive exhibits, combined with art installations and high definition film projections are what make the new wing special and effective. Each component of the new space works with the others to help educate visitors and inspire the behavioral change needed to save our planet. Rather than focusing on the doom and gloom of how much humans have harmed the planet, “Pacific Visions” teaches visitors ways they can personally contribute to a sustainable future with the decisions they make in their choices and behaviors on a daily basis.

When I started developing my art (a fusion of aquariums, sculptures and art installations) my goal was to bring people closer to nature. I wanted everyone to see creation through my eyes. I wanted people to realize that nature is truly miraculous. All anyone needs to do is stop for a moment, look closely at a flower or other aspect of nature and really take the time to appreciate what they are looking at. A common rose is beautiful but so familiar that it is easily overlooked. Telling people to stop and smell the roses is cliché. Sea life is very different. It is hidden from view and typically only experienced by those who make an effort to see it (watching documentaries, scuba diving, snorkeling or visiting public aquariums). 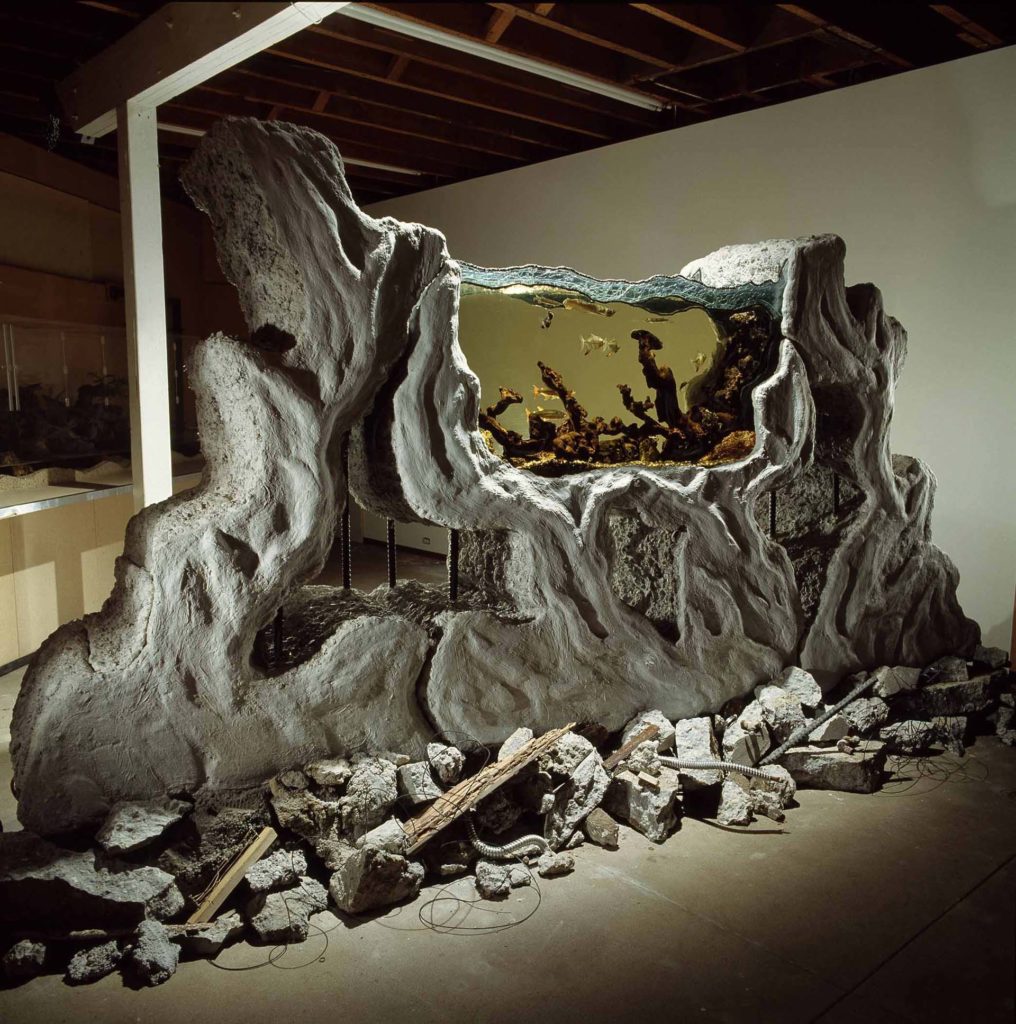 My vision as an aquatic artist, and my resulting works of aquatic art, are intentionally dramatic and somewhat extreme from a design perspective (more sculpture than aquarium in many cases). I do this intentionally, because I want to shock people, stop them in their tracks and draw them in to discover the living art contained within the works. The life forms inside my installations are the real art, brought to us exclusively by our Mother Nature, God, The Creator (however you interpret him, her or that). No artist can come close to creating anything as amazing as a jellyfish, leafy sea dragon or living coral. We are connected to the larger miracle of creation, and finding a balance between us and everything else here on Earth is not only wise but essential. In the long run, we have no choice. Pacific Visions helps us understand what is really happening. An array of world-class designers, film-makers, artists, educators and technology hotshots worked as a team to create the new wing. It educates, inspires and offers real-world solutions that we can implement today.

For more information about the designers, CLICK HERE to view an in depth article about Pacific Visions on the Destination Section of ETG. 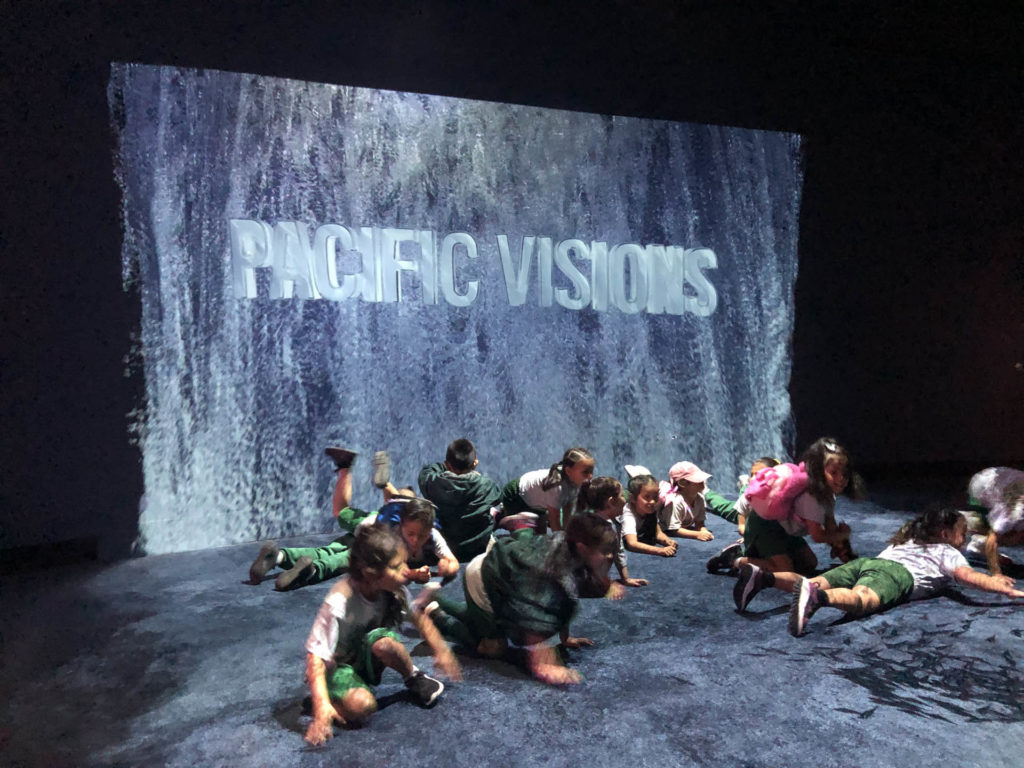 Visitors arrive in an exhibit area featuring several art installations, some designed specifically to be touched and interacted with. In the next room, a virtual waterfall is projected on the wall with water effects on the floor, all responding and changing with the human touch. Adjacent to this installation, a large LED screen shows an introductory film featuring many aspects of our spectacular planet, all filmed with precision and inspiring to view. As well as exhibiting the beauty of our planet, the film also teaches viewers how humanity progressed through time with the earth’s populations growing rapidly, fueled by agricultural innovation and the use of water engineering. Images of industrialization follow and humanity’s impact on the planet becomes significant and clearly concerning. The harmful effects of pollution are noted, and one cannot help but feel emotional when viewing the film.  Fortunately, at the end of the film, visitors are quickly guided into the multi-sensory theater where another even larger screen is used to show a production dedicated to solutions, envisioning humanity in balance with nature through innovation and creativity. Many of the innovations which look like fantasy are being implemented already in various stages of their evolution. 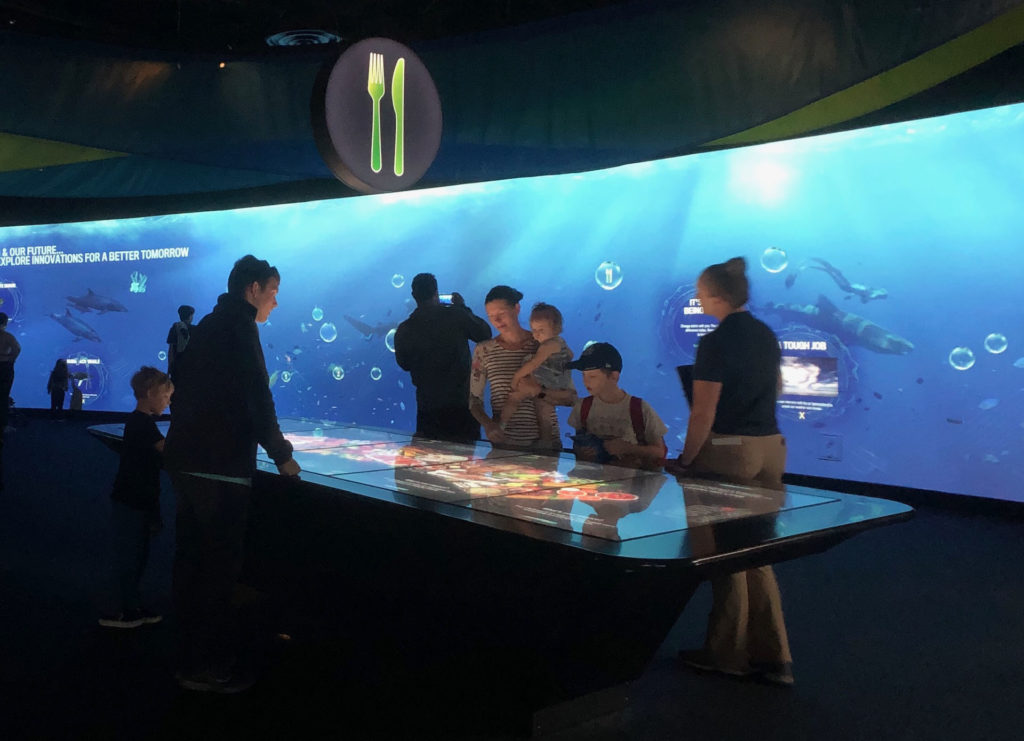 While zoos and public aquariums have at times been targeted by animal rights activists for exploiting nature, today’s facilities seem to have discovered their deeper purpose. Large animals like killer whales are no longer kept on display or exploited for profit. Advanced animal husbandry is essential to every facility. Everything behind the scenes is taken quite seriously. In fact, public aquariums are closely aligned with universities and research institutions, all working together to understand how our ecosystems function and all working to find solution. “Pacific Visions” exemplifies the future of zoos and aquariums. Much of what you see is presented to you through advanced digital imaging. Designing and building it required extensive collaboration between scientists and a whole array of various professions, all working together to create an attraction which inspires real change. 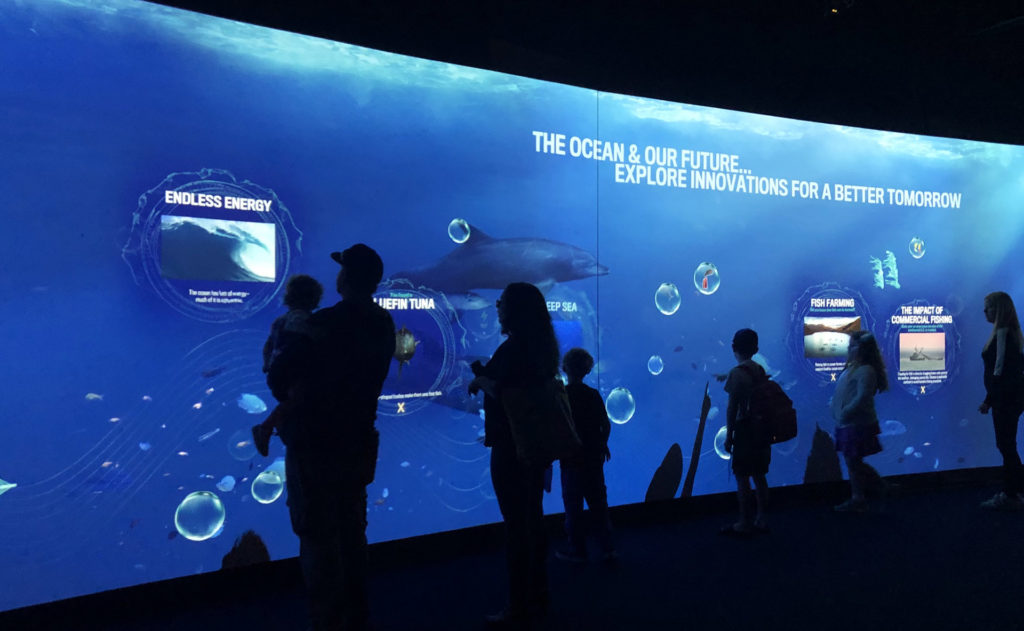 Families at the Bubble wall, Culmination Gallery at Pacific Visions; Aquarium of the Pacific; photo by Richard Bilow; courtesy of ETG

Adults will enjoy their visit and learn a lot, while children will go away excited to be a part of the future they will create. The live animal exhibits in the original facility offer a bridge to the more tangible connection people experience when they interact with other creatures. Once a sea lion looks you personally in the eye, blows bubbles in your face and starts doing loop to make you giggle, you cannot help but find yourself motivated to protect your newfound friend.

CLICK HERE to find out more about Pacific Visions on ETG’s Destinations Section, or visit the Aquarium of the Pacific website.