The consistent heavy rains of 2019 brought unexpected super blooms to many parts of California. Photo enthusiasts seized the moment and headed for the hills. Excited by the unexpected opportunity, I checked my calendar and found a couple days to break away. My first experience photographing a wildflower super bloom was in 2017. I never thought it would happen again so soon. As a nature lover I know these opportunities can come and go in a flash. If you don’t want to miss out, you need to create the time you really don’t have. I’m so glad I did. 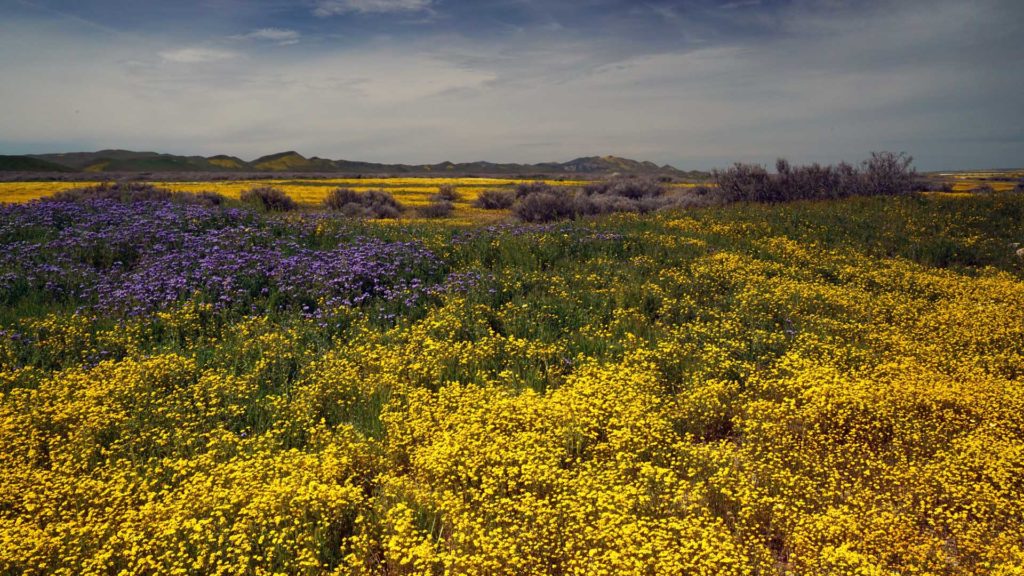 Back in 2017 Anza-Borrego Desert State Park and the poppy fields of Lancaster were drawing huge crowds. My love of photography and my new camera gear had me under a spell, so I headed out to Lancaster on a whim, hoping to capture the vast expanses of bright orange poppies.

My trip was poorly planned however. The crowds were worse than I imagined. I should have done my research and taken a longer trip. The flowers were blooming, but the hills were filled with visitors. The roads were congested. People were everywhere, and there was nowhere to park. Not easily discouraged however, I took the logical next step and searched the internet for a more remote location. That’s how I discovered what has now become one of my favorite places, Carrizo Plains National Monument in Santa Margarita California. That is where I got the shots I was after in 2017. 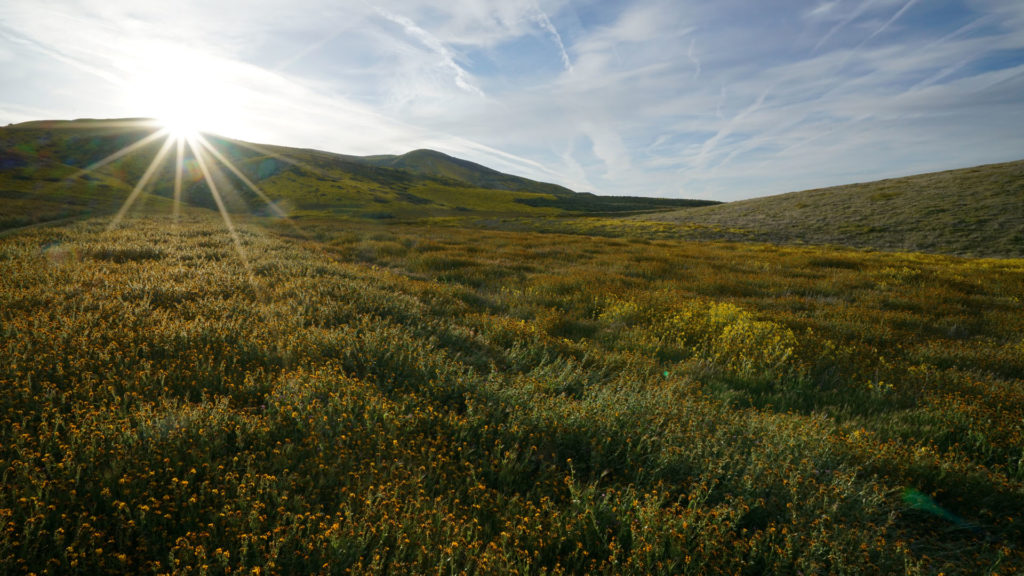 In 2019 I returned to Carrizo with a plan. On my first trip I did not know the area at all and was quite disoriented. As an ETG story contributor, I want to make sure our readers know where to go. If you access Carrizo from highway 33 (as I did in 2017), you can use Soda Lake Road or Elkhorn Road. Both offer amazing views, but the roads are long and bumpy. In 2017, I selected Elkhorn Road which runs along the base of the Temblor range. I got some interesting shots at sunrise, but the full variety of colors (which motivated me to take this trip), turned out to be much further north than expected. I was chasing the bloom, searching for the perfect spot. 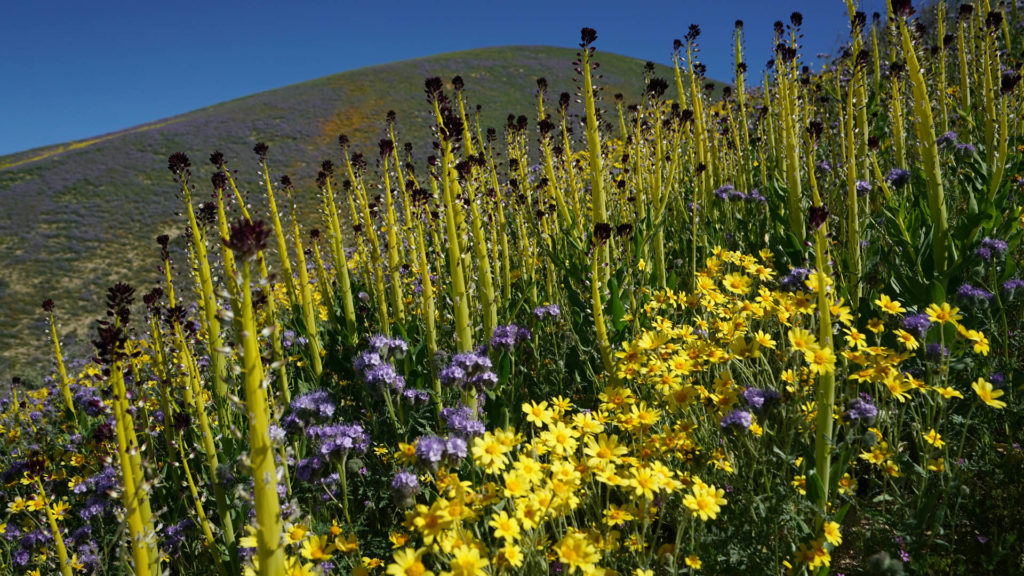 As the sun rose higher in the sky, I became concerned that the light would be too harsh by the time I found what I was looking for. My anticipation was stressful, but the long drive did eventually pay off. I began to see the rolling hills I was determined to find; seemingly painted by Mother Nature with vast expanses of virtually every color flower I could have imagined. This was the sweet spot.

In 2019, I planned ahead. I enjoyed some luxury and a romantic night with my wife by staying in Paso Robles. That strategy gave me access to Carrizo from highway 58 to the north. This offered more paved road driving and quicker access to the areas I wanted to photograph.

While the wildflower blooms of Carrizo are an annual occurrence, displays like those in 2017 were truly special. With the exceptionally wet 2019 season there was speculation that another great bloom might happen. I had a good feeling and was paying close attention. By mid-March the word I thought I might never hear again hit the news in a big way. This time the “super bloom” at Lake Elsinore was the undisputed hot spot. The crowds there grew rapidly, so I called the Carrizo wildflower update number (see below) and began checking the status of the bloom up there. 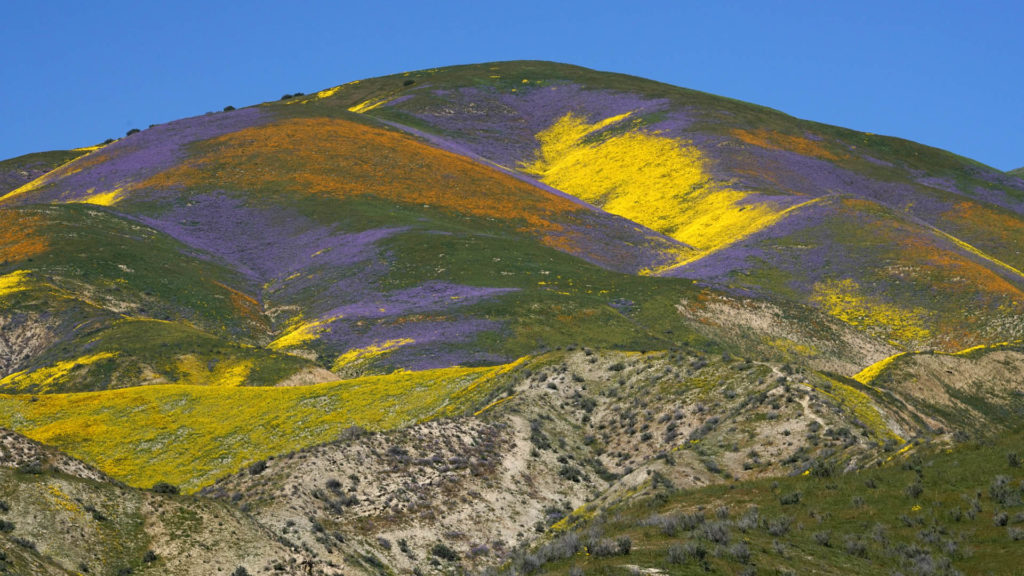 I knew that catching the peak of the bloom was unlikely due to my restricted schedule. However, I was determined not to miss out on the experience. This time, I was far more prepared. I brought snacks, lots of water and a tank full of gas. I knew the general layout from my previous trip, and entering from highway 58 was the right decision. I headed south down Soda Lake road. From there I cut across the plain towards the Temblors as the sun began to rise. This put me right where I wanted to be with minimal bumpy road driving. My 2017 experience made this trip far more relaxing.

Getting close to Carrizo by staying in Paso Robles also worked out well. In 2017 I stayed near Bakersfield. In 2019, my route up highway 101 (along the coast and through wine country) offered a nicer drive and a wider variety of lodging options – perfect for my wife, a travel/food writer who enjoys nature and wildflowers but loves wine and gourmet food. 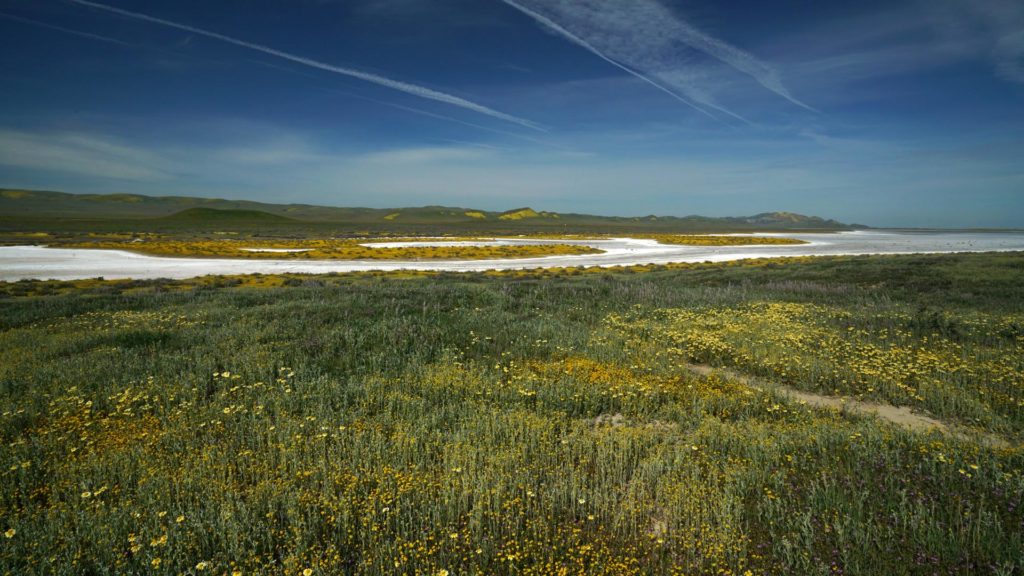 I proposed the trip to Kathy with my alternative route and did not even ask if she wanted to wake up at 4:30am to go see the flowers. I knew that was not her thing, especially if she had the option of visiting some of the world’s best wineries in Paso Robles.

In addition to being the co-founder of EatTravelGo.com, Kathy is also an arts and entertainment writer who created LAArtParty.com in 2010. Read Kathy’s version of our trip under the Unplug/Recharge drop-down of the Stories sections of this website. Paso Robles is filled with interesting stories of artsy people who left traditional lives to create their dream wineries. So, my 2019 plan worked well for Kathy. We stayed at La Bellasera Hotel & Suites, a highly rated hotel with a little-known secret, a gourmet restaurant with food and spirits that one might expect to find only at a 5-star property. Read Kathy’s Restaurant Review Here. 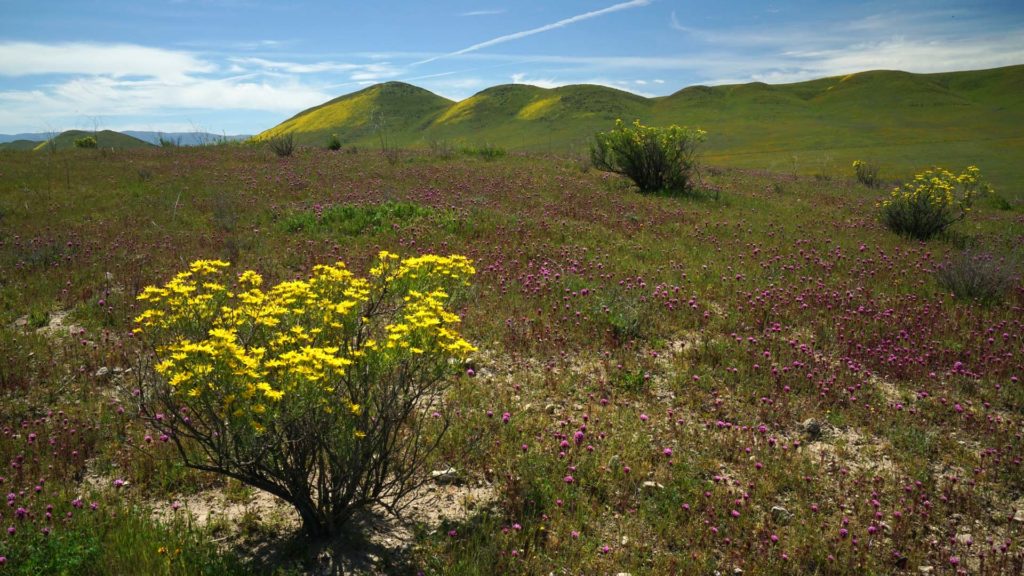 It was smooth sailing down highway 58 at 4:30am and I arrived at Soda Lake road before sunrise. As it turns out, my travel date was about a week before the full spectrum of colored flowers had bloomed. Despite my early arrival – and the limited amount of orange poppies in bloom – the landscape was covered with color. My photographs and my experience being with nature were well worth the effort. I drove a lot and hiked very little this trip. I crossed the plain a couple of times and did a short walk up a hill to the west, searching for what might be hiding just out of view from below. I drove up little roads and found convenient vistas. There were probably 30 cars in Carrizo, but most were parked in one of two small areas. I spent lots of time alone, creating photos in stunning settings surrounded by flowers and views in all directions. The majority of visitors seemed to be in a state of meditation, gazing across the vast expanse of luminous yellow flowers which dominated the landscape. Off in the distance, the hills of the Temblor range offered a multi-colored backdrop for the dazzling display of flowers surrounding Soda Lake (ETG note: Soda Lake is the largest remaining natural alkali wetland in Southern California.) 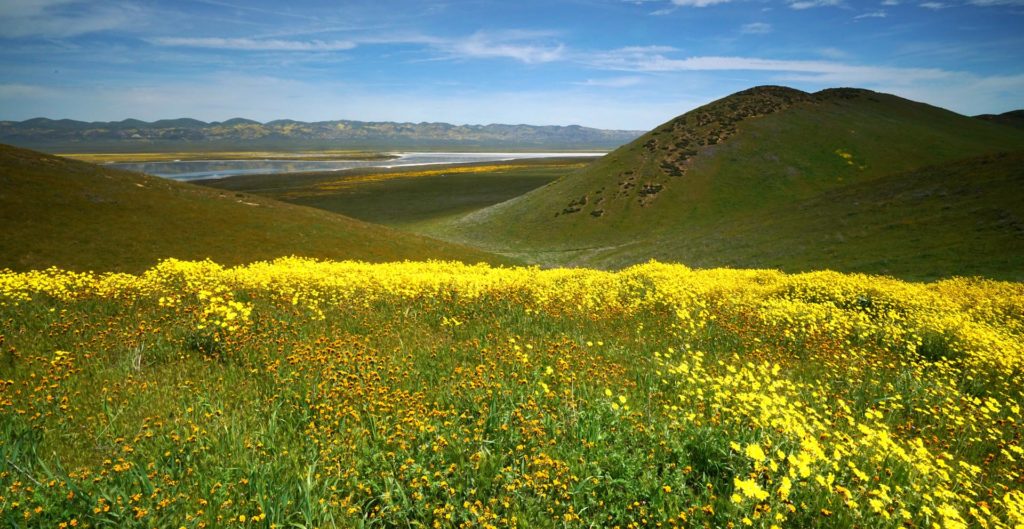 Carrizo Plains National Monument is one of California’s natural treasures. It can be experienced with “minimal” effort by Angelenos willing to break away for a couple of days. Don’t go if it’s raining however, because the roads are impassible. If you can get away for several days or longer make Carrizo a small part of a bigger travel experience. Take the coastal route with stops at a few of the towns along the way. Consider Pismo Beach, Solvang, Avila Bay, Morro Bay and of course Paso Robles (with a stay at La Bellasera and a gourmet meal at their restaurant.)

Story and photograph by Richard Bilow; courtesy of ETG