Long Beach: Pacific Visions, The Aquarium of the Pacific

Public aquariums are popular attractions around the world. In May of 2019 the Aquarium of the Pacific, in Long Beach California, officially opened its first major expansion in its two-decade history. Pacific Visions is a 29,000 square-foot, two-story, sustainable structure designed by EHDD (a San Francisco-based architecture and design firm). 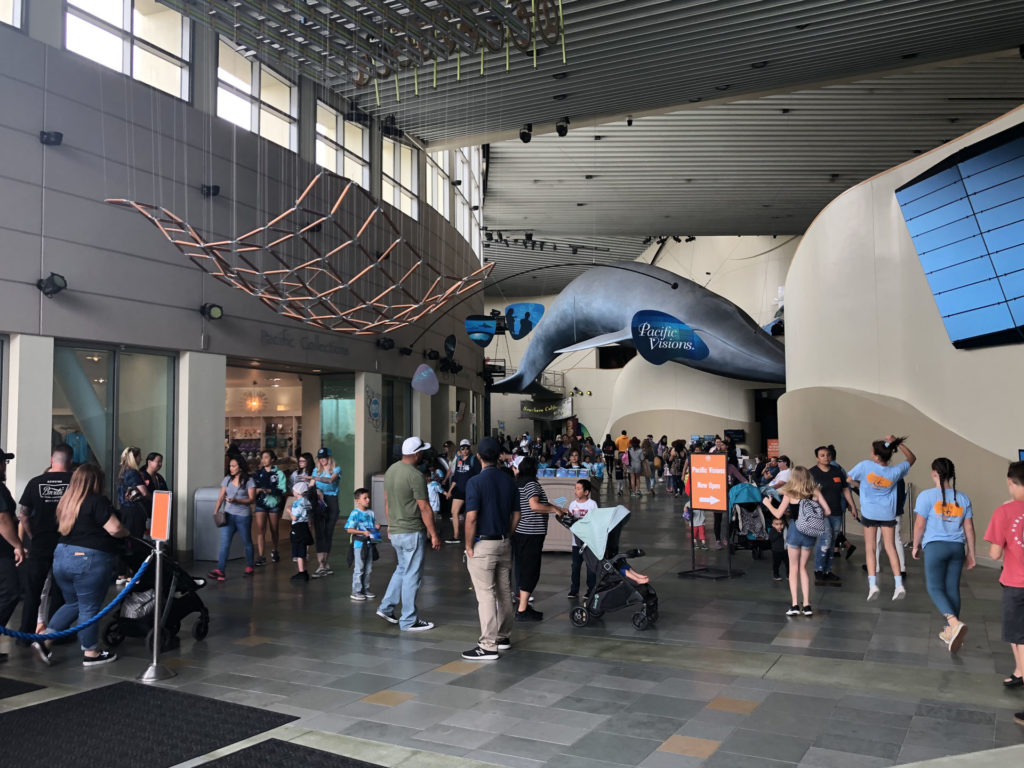 Aquarium of the Pacific Lobby; Photo by Kathy Leonardo

The new wing houses a state-of-the-art immersive theater, an art gallery, a “culmination” gallery with interactive game tables, and live animal exhibits. Its focus is to educate the public and inspire visitors to change their behavior to achieve a sustainable balance between humanity and the planet. Reefs & Drifters is the inaugural exhibit in the 2,800-square-foot Pacific Visions art gallery, which is where visitors enter the Pacific Visions wing. The installations were designed by Convivial Studio, a European art and design practice. The exhibition features everything from video projections, spatial soundscapes, a touchable coral sculpture wall, glass sculptures inspired by plankton, and a collection of mirrored exhibits called Infinity Coral. 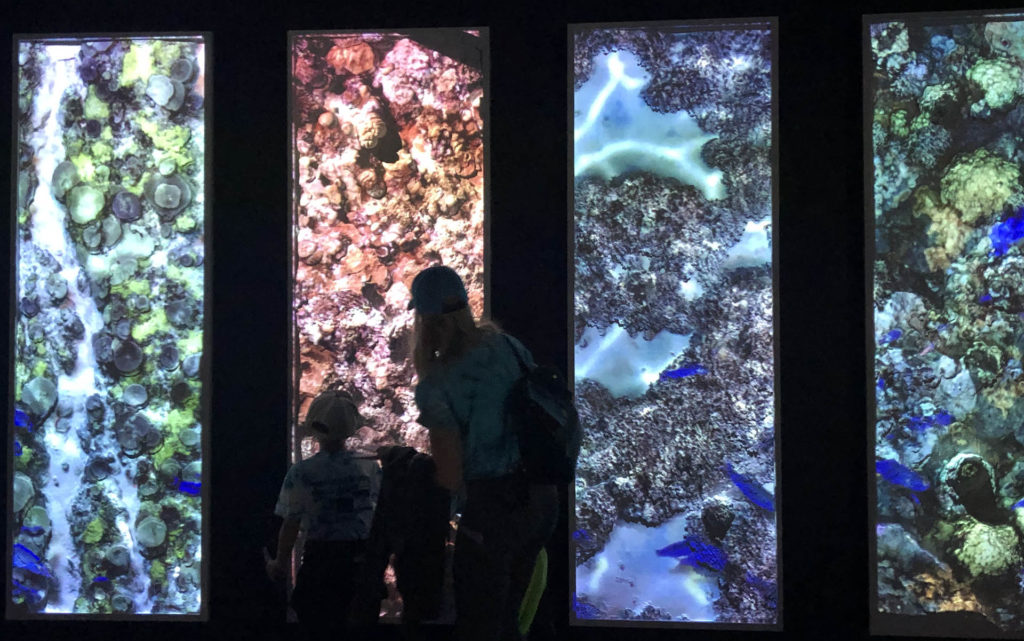 Once visitors have made their way through Reefs & Drifters, visitors can enjoy a 2,600-square-foot orientation gallery that offers an 18-foot-wide virtual waterfall with interactive elements that respond to movement. A 26-foot-wide by 8-foot-tall LED screen on the adjacent wall plays a pre-show film which provides a visual tour through the history of life on our planet, highlighting how humans are connected with nature, and how we, as a society, have affected our world. 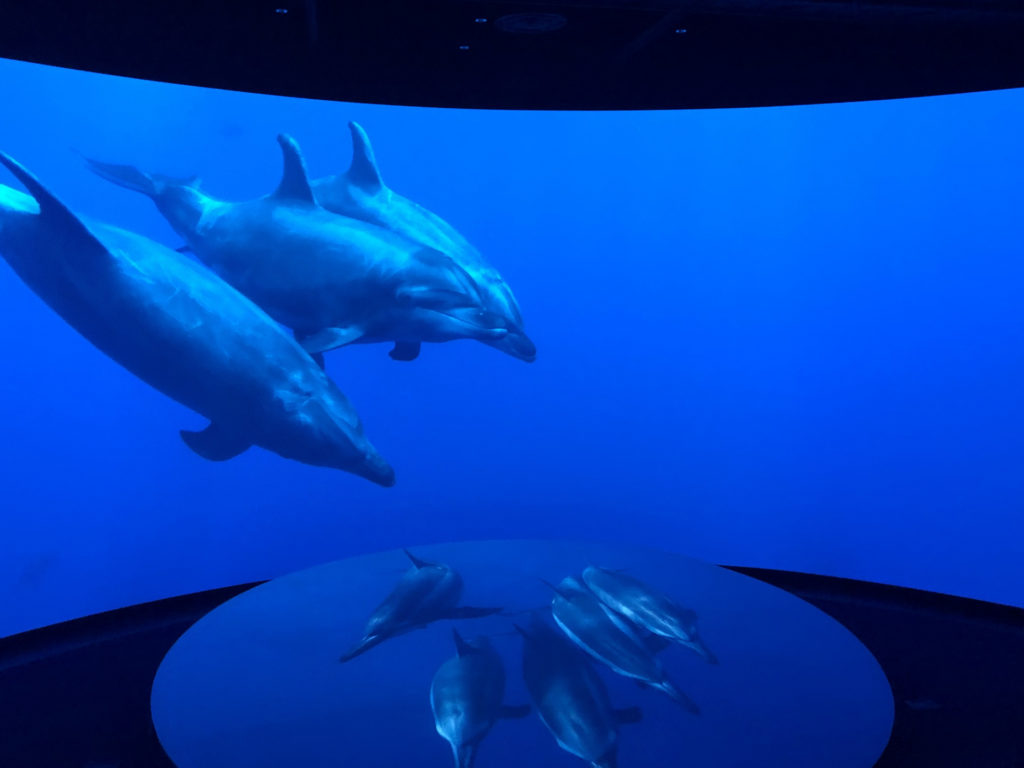 A Still from the Film Designing our Future at Pacific Visions; Photo by Kathy Leonardo; courtesy of ETG

Next, the public is invited to view an eight-minute multi-sensory experience in the 300-seat Honda Pacific Visions Theater. The film, titled Designing Our Future offers stunning high-resolution views projected on a 130-foot-wide by 32-foot-tall screen that curves in a 180-degree arc and a 36-foot-wide floor projection disc. The Aquarium and Cortina Productions teamed up with leading scientists, filmmakers, storytellers, and digital artists to create an immersive experience, which engages the senses through fog, wind, scent, strobe lights, and seat vibration. As a whole, this presentation envisions a future where humanity lives in balance with nature through the implementation of sustainable technologies.

After experiencing the various exhibits, installations and presentations, visitors are invited to apply their newfound knowledge to make a personal action plan for sustainability through the Pacific Visions EcoAlliance app for Apple® and Android™ devices. Designed by Artifact Technologies, Pacific Visions EcoAlliance features an evolving set of interactive challenges that inspire players to conserve resources, build a community, and explore key sites around Long Beach. Pacific Visions can be appreciated by adults and children, but don’t be surprised if your children end up teaching you how to navigate the touch screen interactive installations. While you are there, be sure to check out the all of the original exhibitions, plus the expansive live exhibit area where you will find everything from jellyfish to leafy sea dragons to seals, sharks, living corals and of course a wide array of fish. 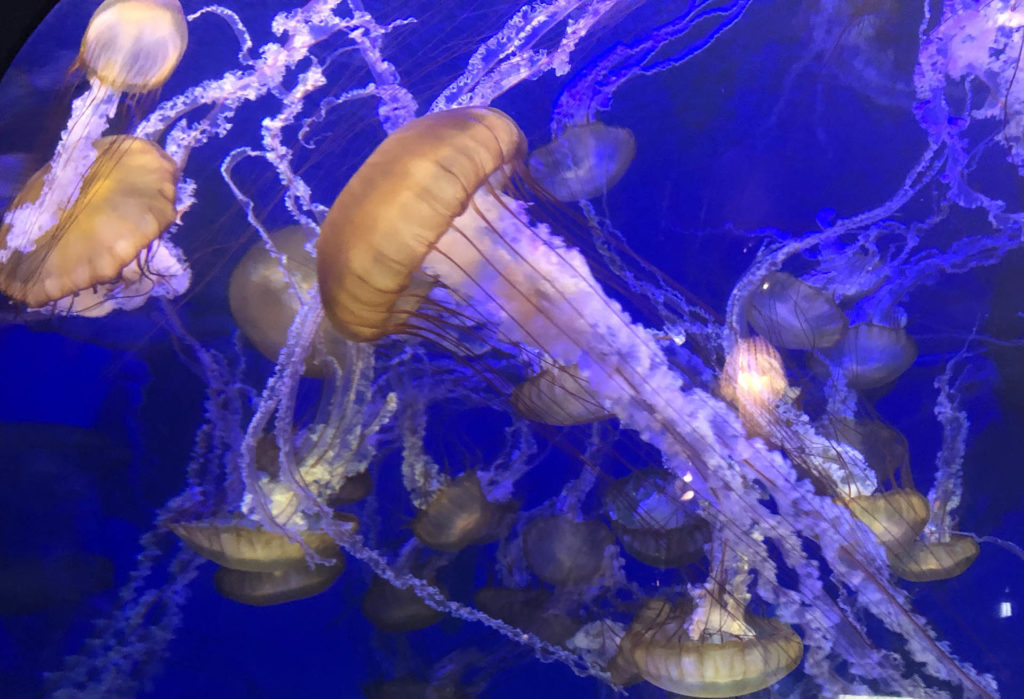 Jellyfish at the Aquarium of the Pacific; photo by Kathy Leonardo; courtesy of ETG