Although Covid may have thrown a curve ball into the LA Times Food Bowl, the incredibly popular annual foodie event kicked off (in-person, with all the bells and whistles) on September 1, 2022 with a welcome festival and lots more intimate events throughout the month. This event culminated in a three-day weekend food fest (Sept 23, 24, 25) known as Night Market, held at the Paramount Pictures Studios backlot NY Stage. Celebrating LA’s finest restaurants, chefs, pit-masters, and caterers (with wine, beer, cocktails and beverages) the foodie extravaganza featured over forty options to please your palate each day.

If you are wondering how one reviews three back-to-back dates with different themes all in one article, I’ll tell you. I’ve chosen my top five picks for each of the three dates. 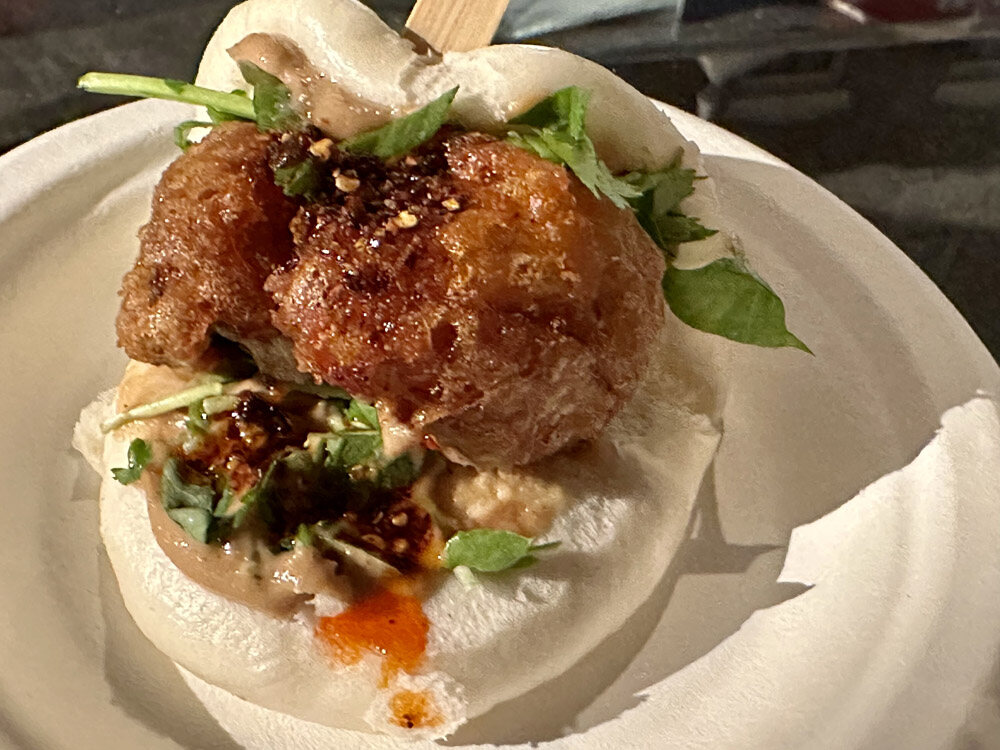 The first night of every three-day food festival brings excitement and anticipation. My photographer and I were not disappointed, as we entered Paramount’s back lot and got our first glimpse of the seemingly endless food and beverage booths.

When I arrive at a food event, I usually grab something that looks pretty fabulous to eat near the entrance then dart to the back of the venue to find a favorite treat, before the lines get too long. My first selection from day one turned out to be my # 1 Pick. Man Eating Plant LA offered an exceptional dish – Fried Shroom Bao (lotus steamed bun, beer-battered king oyster mushroom, cashew hoisin, pickled Serrano, cilantro, scallion, chili oil). It was crispy and spicy on the outside, and the oyster mushroom inside was so meaty. The lotus bun was soft yet chewy and majestically swaddled each crunchy bite. 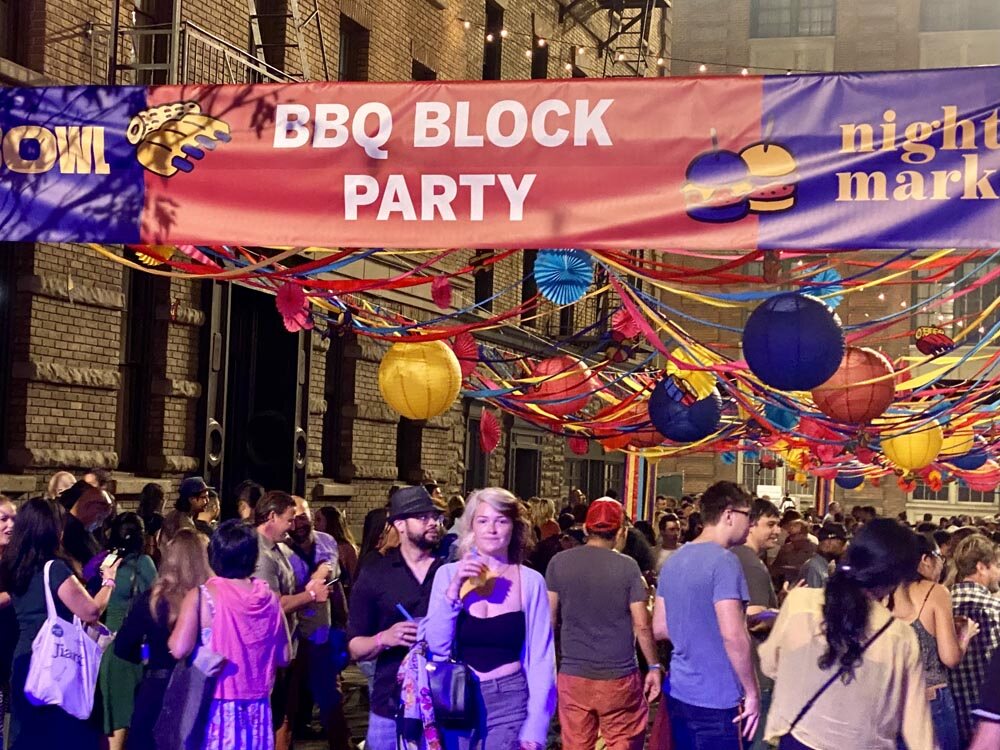 BBQ was the theme of night one, and the BBQ Block Party offered an array of tasty burgers, chicken, ribs and more. My # 2 Pick – Eszett (from Silverlake) stole the show with its tasty wings (Salsa Machu) – crunch meets spice!

After getting a bit of food in my belly, my first glass of wine came from Copper Cane Wines and Provisions. Brian Harley poured a tasty Napa Valley Quilt Cabernet Sauvignon. It made quite the impression on me, so I returned to taste the red blend. The Quilt Napa Valley Fabric Of The Land Red Wine is a blend of zinfandel, merlot, petit verdot, and petite sirah. This rich creamy red offered notes of black cherry and coca – so tasty.

In addition to wine there were several options for vodka, tequila, and beer which my photographer enjoyed tremendously. 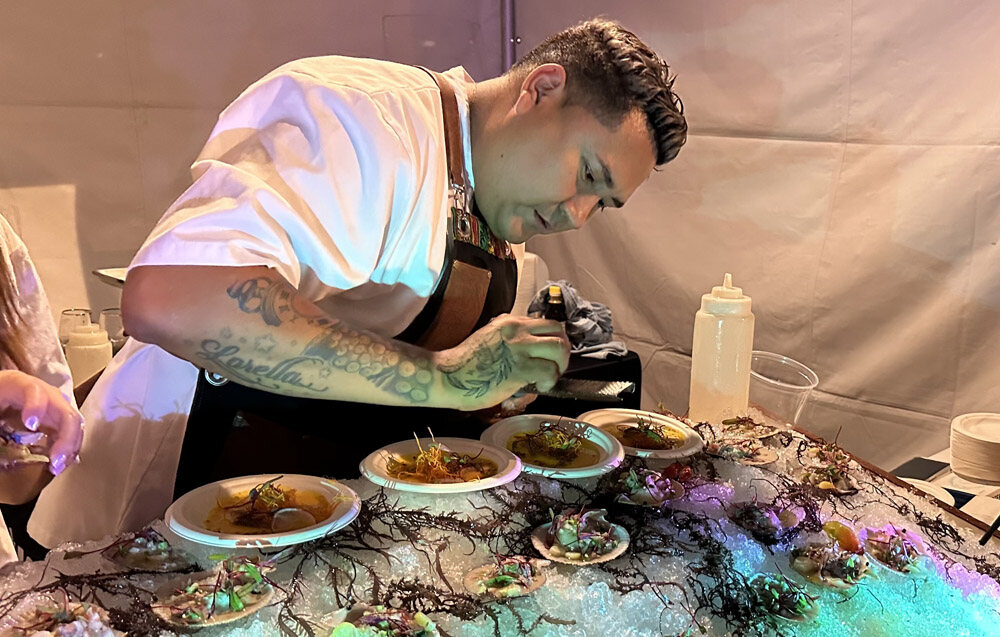 For my # 3 Pick, I chose Ceviche Stop. I happen to be a fanatical Ceviche lover…what a beautiful presentation! Owner & Chef Walther Adrianzen is a true artist. I tried the Truffle Hamachi Tiradito and the Peruvian scallop served in a shell. The truffle flavor was the perfect touch, clearly present but not overpowering. Both selections tasted light and fresh. The 2nd dish featured subtle nuances of citrus clinging to the tender scallops.

When we first arrived, there was a very long line at the Lunasia Dimsum House, but there was a brief moment where it lessened later in the evening, so I hopped on it, and boy am I glad I did. I enjoyed a spectacular taste of my # 4 Pick… The Hargow (jumbo shrimp dumpling) was loaded with sweet tender shrimp, and the Siu-Mai (pork & shrimp dumpling) was layered with flavor. The long lines at Lunasia were easy to understand after tasting the dumplings. They were amazing. 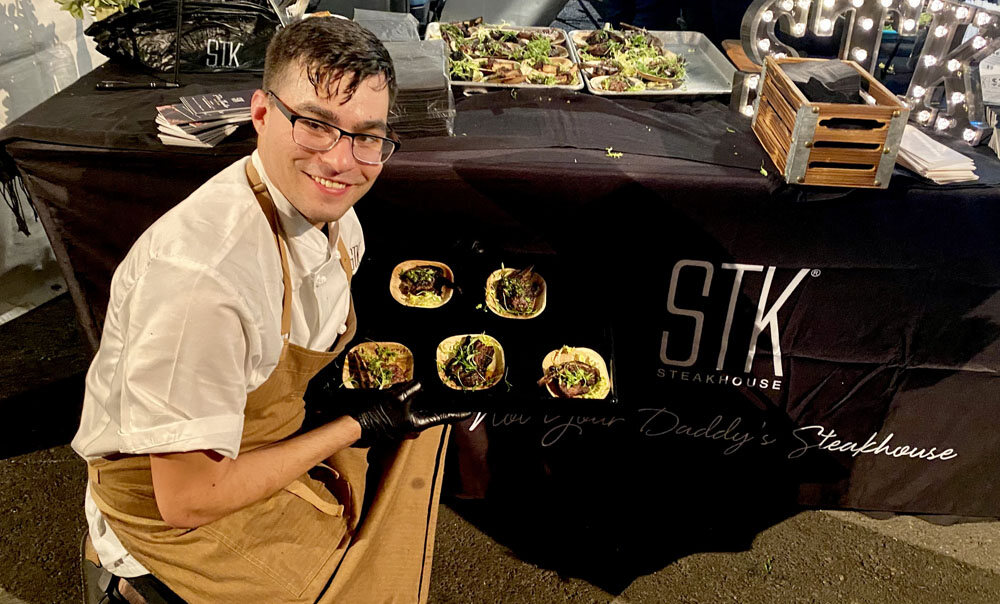 STK Los Angeles provided my # 5 Pick – a scrumptious Filet Lollipop Chimichurri, a nice hunk of meat…perfectly cooked. This was my photographer’s top pick, but since I am writing this article, it remains #5 – still an amazing rating out of some forty plus vendors. I do love the food at STK – CLICK HERE to read my restaurant review, or visit the Stories Section of ETG, the Dining Drinking Page; under the Reviews drop-down;

Day two proved to be just as exceptional with a bit more on the dessert end. All weekend the event featured cooking demos which were fantastic. I had the chance to meet Chef Jet Tila, a regular on the Food Network, while he was signing his latest cookbook “101 Asian Dishes You Need to Cook Before you Die.” I was excited to leave with a signed copy of the book, and got a kick out of meeting a chef I have admired for years. 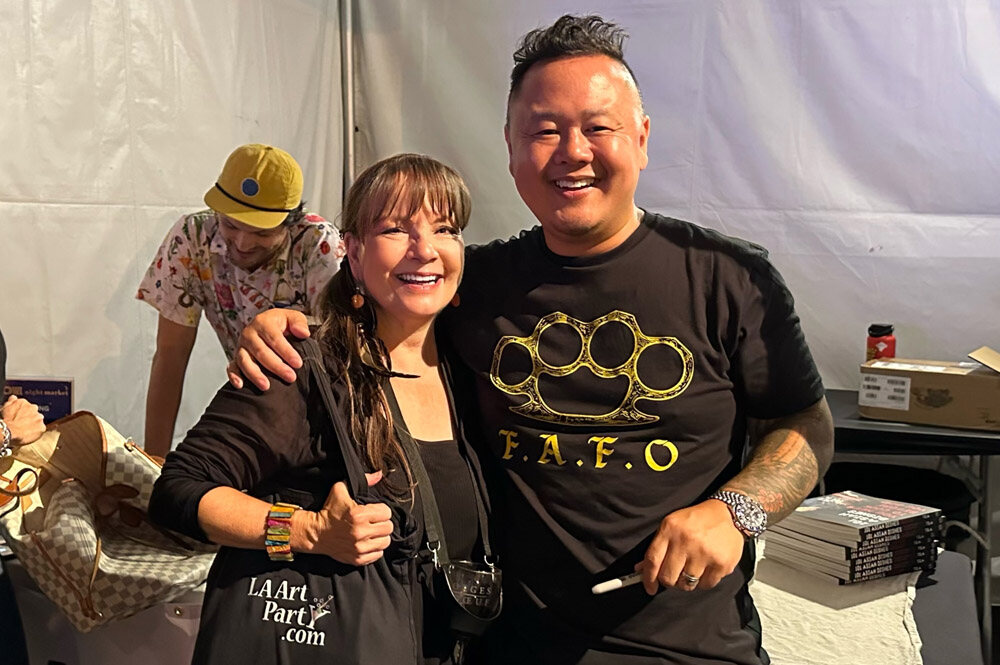 Pick # 1, Noree Pal, owner of Noree Thai always ‘brings it,’ this time serving both chicken and tofu in a curry sauce with rice. I opted for the tofu, which was excellent. This was a fried tofu with texture (not like the mushy tofu we all grew up with). The sauce was so flavorful and lush – the consummate companion for a bed of rice. 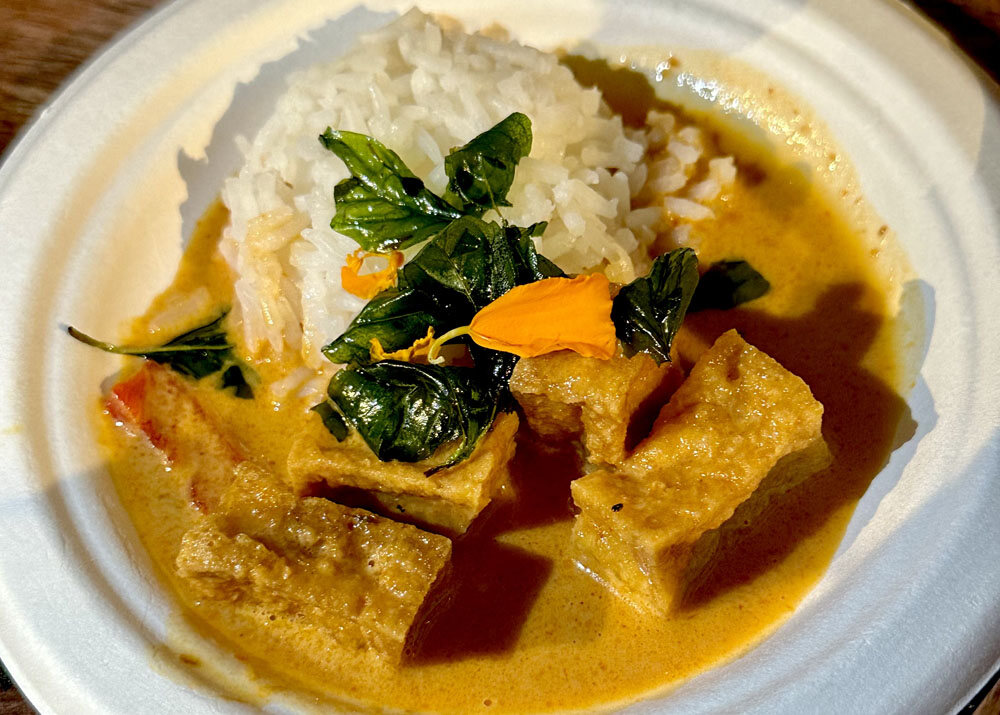 RYLA lured us in with some tasty cold sesame noodles (shredded chicken, cucumbers, pickled carrots, sichuan peppercorn oil, cilantro). This would be my # 2 Pick. The finely sliced veggies and sesame seeds created a wonderful mouthfeel matched ever so subtly with tender chicken and noodles slathered in its peanut sauce counterpart.

I am a massive fan of pizza…Ronan received the # 4 Pick. A simple Margherita pizza was just what I needed. The crust had a nice chew, and the sauce was sweet, yet acidic, with just enough velvety cheese. My taste buds yearned for a full-bodied red wine, so I headed to the Moraga Bel Air. Their 2014 Red Blend offered notes of dark berry and leather…it was an exquisite pairing. 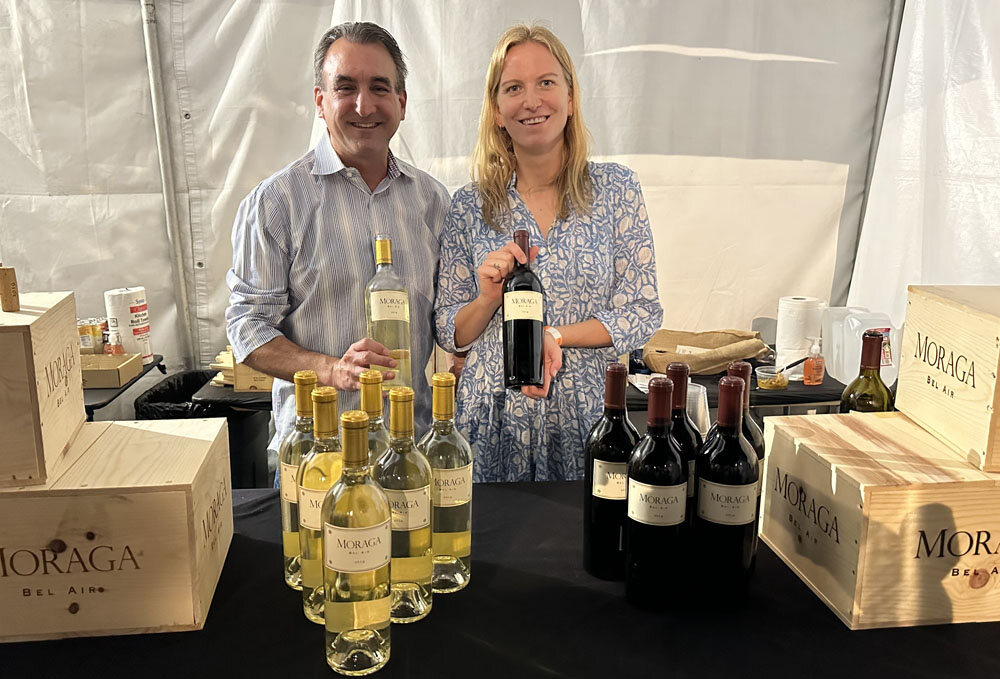 As I mentioned earlier, dessert was plentiful on Saturday night. My last Saturday Pick # 5 goes to Eastside Cheesecakes, offering a fabulous array of sweet cheesecake concoctions – chocolate was my favorite. When I asked why it was so scrumptious, I was told they make their own cream cheese.

On Sunday, the third and final event of the weekend, I decided to be a bit more selective. Let’s face it, I was still full from Friday and Saturday.

Once again artisan-style pizza was abundant at the Sunday Brunch event, and I was down for that. My # 2 pick is Apollonia’s Pizzeria known for its thick crusty crust. I’ve written about this pizza and its owners (Justin and Linda De Leon) previously in a 2019 LA Food Bowl review. CLICK HERE to read. 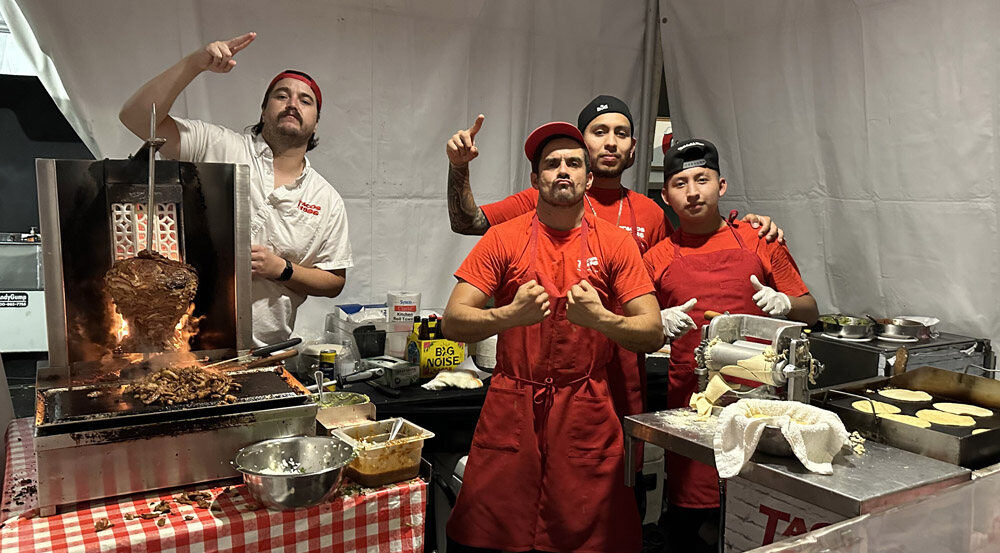 The Team from Tacos 1986; photo by Richard Bilow; courtesy of ETG

For Pick # 3, I have to go with Tacos 1986. Not only were the tacos out-of-this-world (with fresh tortillas made on-site), the cooking crew put on a show as they prepared the food. Tacos 1986 clearly has a teamwork philosophy which explains their success and extremely long lines.

My Pick # 4 of the day was Hotville Chicken – so zesty, with a glorious crunch – and spicy HOT!!!

My love of desserts once again influenced my choice of the final Pick # 5 from the Sunday event. B Sweet Dessert Bar is known for its bread pudding, and presented an incredible spread of goodies.

Whew – what a fabulous weekend – my taste buds are still tingling. If you are a food lover, this event is for you! Be sure to book your tickets for the next LA Food Bowl – find out more on the website – https://lafoodbowl.com/

See our instagram for more foodie images from the event. @eattravelgo @LAArtParty.com