The Los Angeles Food and Wine Festival is one of the premiere foodie events in Los Angeles, and it happens to be one of my favorites. This year, all of the larger events were held at the Santa Monica Barker Hangar, while the dinner series continued at different locations across LA.

A bustling crowd at LAFW; photo by Richard Bilow; courtesy of ETG;

I was excited to attend “Meat me at LAFW’s Great Steak-out & BBQ with Curtis Stone” on Saturday evening, and Sunday’s “Brunch so Hard with Jeremiah Tower.” Saturday evening’s event was bustling…there was a wonderful party atmosphere. I decided to start the night off with a beautiful cabernet by Grimm’s Bluff (2015). It was a delicious smooth red, with hints of vanilla.

I am a huge Chef Curtis Stone fan, so I headed straight to his booth. Stone has appeared on numerous television programs throughout the years. He has played host to many cooking shows such as Bravo’s Top Chef Masters, among others. With two successful LA restaurants under his belt – Maude (Michelin star), and Gwen – he is one of the more recognizable celebrity chefs…a culinary stud to say the least. 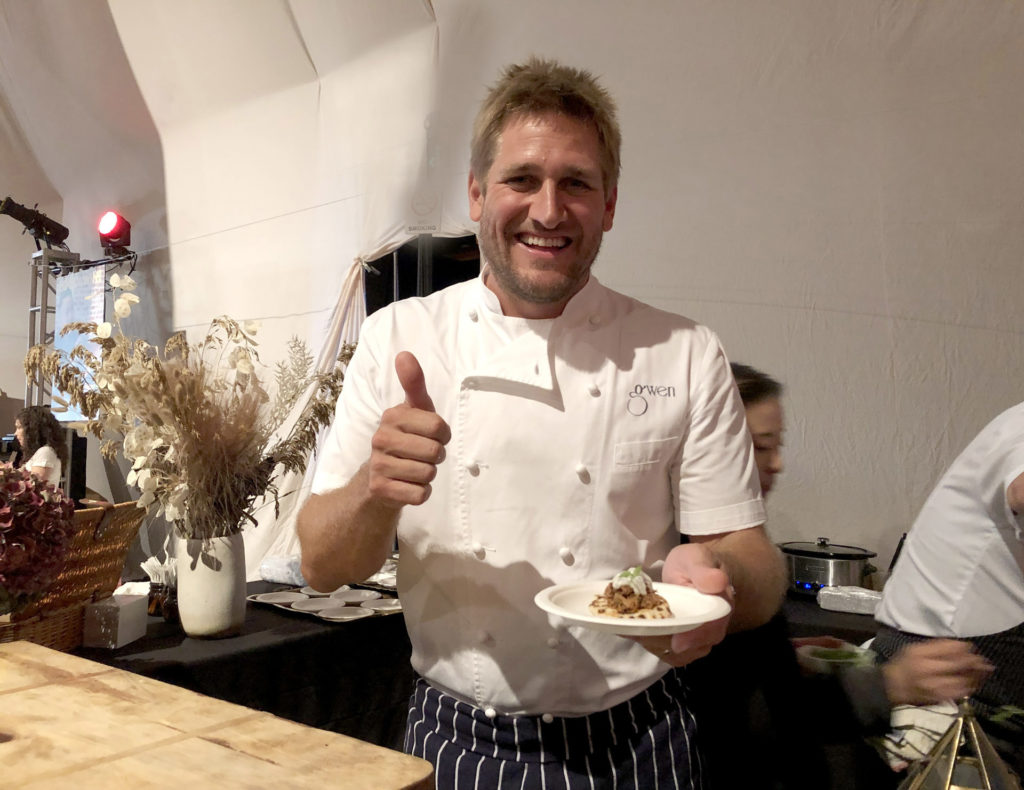 As always, Chef Stone was gracious and amiable, as he offered a heavenly bite of Chimichurri Rojo Rubbed Leg of Lamb (damper flatbread, charred cucumber yogurt). It was of course a perfectly balanced delight. The cucumber yogurt added a subtle and fresh dimension to the delicately spiced lamb.

Next I enjoyed a tantalizing taste of BBQ Unagi Donburi by Chef Wing Ho from Tao LA, along with Dragon Tail Spareribs. Both were fantastic. My eyes widened when I saw the beautifully displayed Wine-Braised Tenderloin (sautéed banana, Aji cilantro chimichurri Arepa) provided by Chef Andres Dangond of the pop up enterprise Dinner with Dres. This was exceptional. 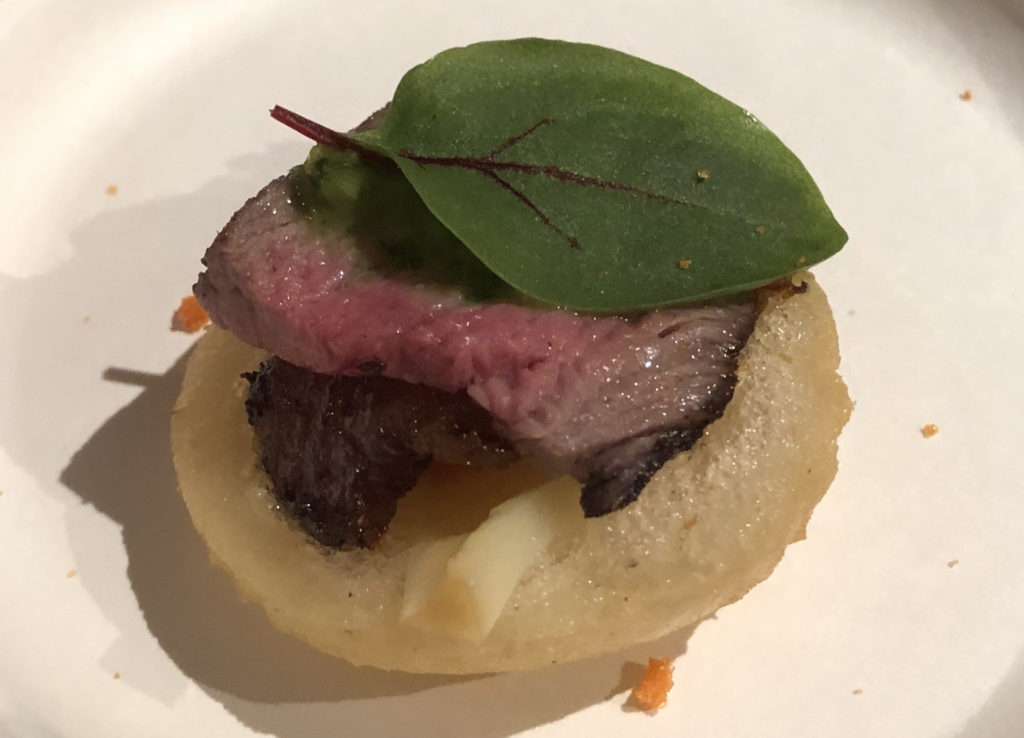 From there I headed straight to Chef Burt Bakman from Slab Barbecue Los Angeles who served up a scrumptious Snake River Dry Aged Ribeye, along with his own brand of wise cracking humor. He put on quite a show as he traded jokes back and forth with his team while preparing the savory steak. 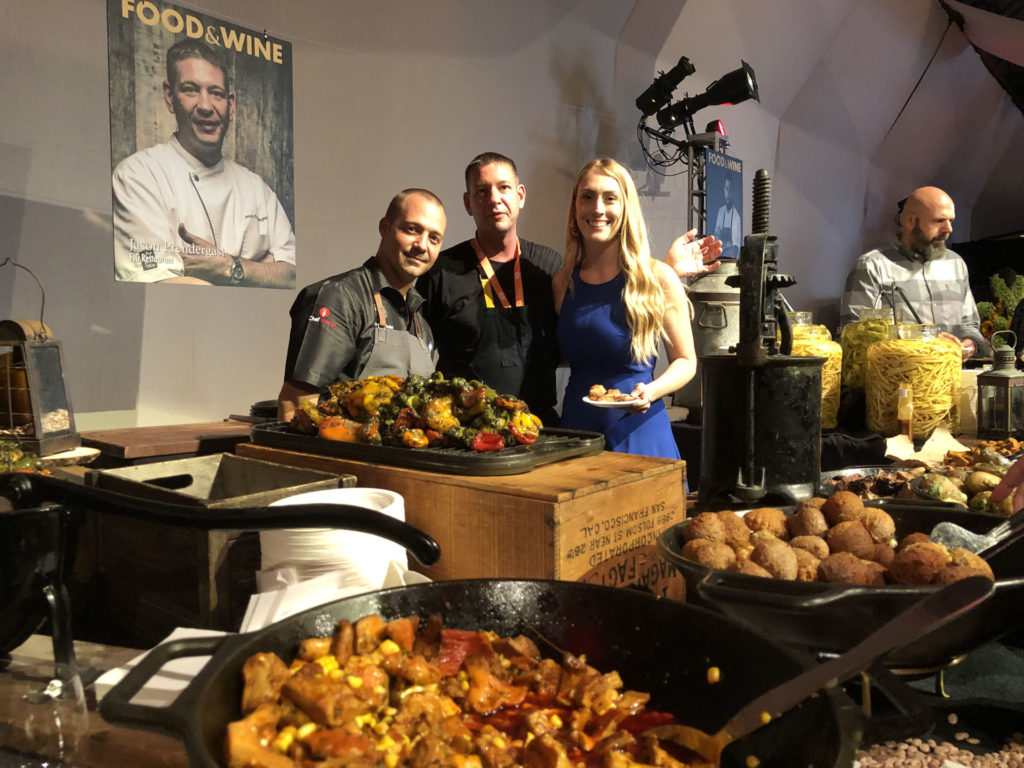 FIG Restaurant has participated in LAFW previously, but this was the first time for Chef Prendergast. Jennifer Bennett (PR Manager) said it was a great experience. “We were excited to host an exclusive kick-off dinner this year in FIG Restaurant on Thursday, August 22, in partnership with Michael Corvino of Corvino Supper Club and Kosta Browne Winery.”

Executive Chef/Co-owner Tin Voung of Little Sister masterfully constructed a captivating dish of beef tenderloin. This was simply diving. Voung along with his partner Jed Sanford of Blackhouse Hospitality Group have been quietly building a culinary empire. I met him back in 2013 when he was the Executive Chef and partner of Abigaile, and Día de Campo. He now oversees six restaurants (eight locations) 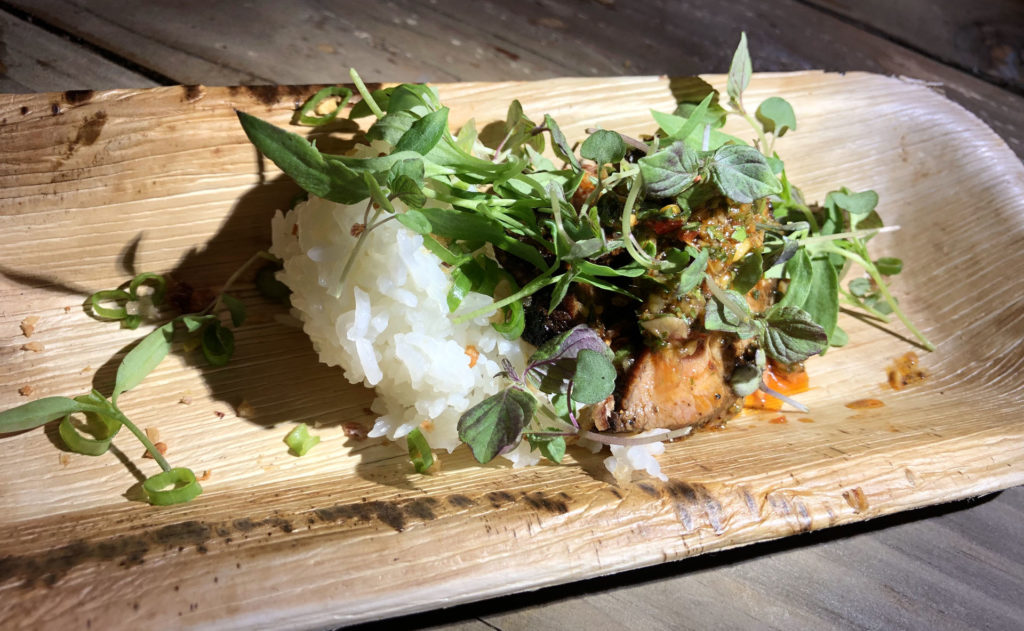 I enjoyed a lovely pinot noir from CRŪ® Vineyard Montage 2016. It had a nice balance of cherries and blackberries, with a hint of cocoa.

Another dish that made a huge impression on me was prepared by Chef John Tesar. The rare ‘Shaved Dry Aged Texas Beef,’ was out of this world. The beef was so tender (like butter). It was served with Mechado Filipino beef stew, Carolina gold rice and chimichurri, which created a deep robust flavor. Tesar gained notoriety through his two appearances on Bravo’s Top Chef television show, as well as successfully bringing back a Five-star rating to Rosewood Mansion on Turtle Creek in Dallas. He has continued to rise, despite a tumultuous journey, and is the mastermind behind the acclaimed restaurant Knife, in Dallas. 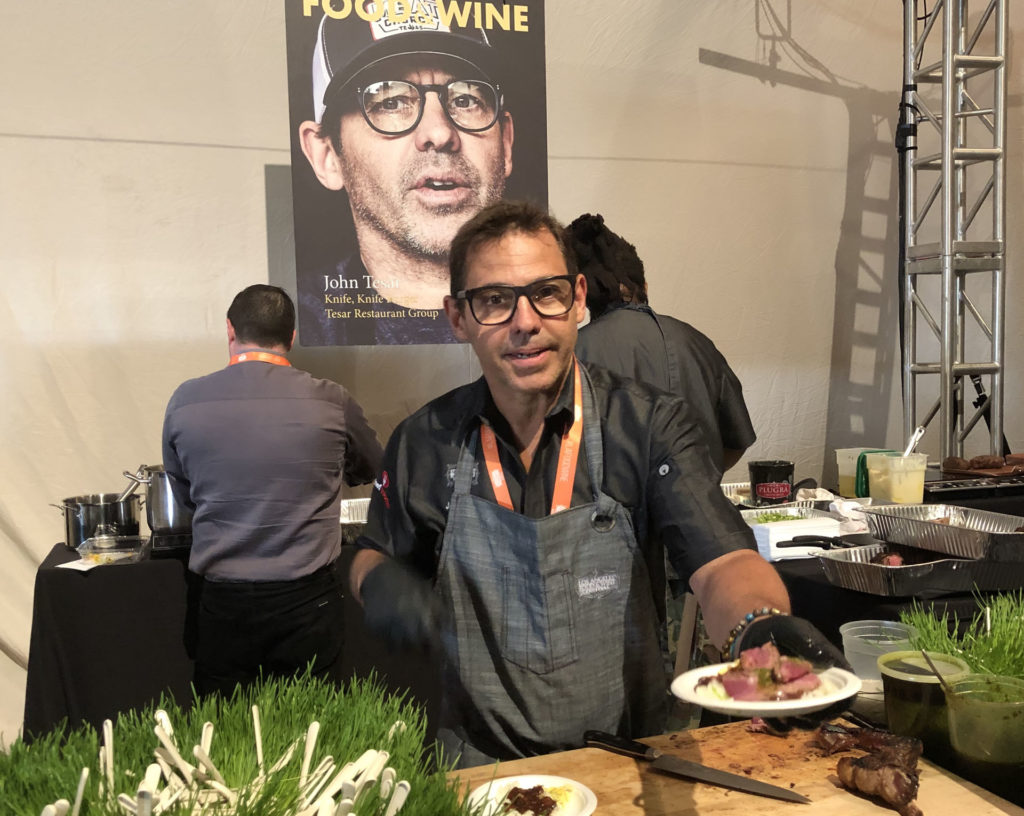 I wanted to end this fabulous night with a sweet treat when I spotted Chef Mathew Beaudin of the Monterey Bay Aquarium handing out some tasty flan. It was a bit heartier than I am used to, but it had a beautiful overall favor – it was quite tasty.

The next day, when I arrived at “Brunch so Hard with Jeremiah Tower,” I was in a bit of a fog. I had done a little too much celebrating at the previous night’s event. A Bloody Mary Oyster Shooter (with horseradish tomato foam) is just what I needed. Presented by Chef Isaac and Chauncey Gamboa of Prospect Gourmand in Beverly Hills, the delish oyster shooter had a kick and woke me right up. Then I was ready to try the Black Truffle Hash Browns Bacon Pork Belly Pastrami (whole grain mustard Sabayon). This too was exceptional, with layers of flavor unlike any I had experienced before.

Jeremiah Tower and me (Kathy Leonardo); photo courtesy of ETG

I had the chance to meet celebrity Chef Jeremiah Tower who was as sweet as can be. Tower has had a long celebrated career and is one of the founders (along with Alice Waters, and Wolfgang Puck) of the culinary style dubbed California cuisine. Tower collaborated with Michael and Vandy Passmore of Passmore Ranch and prepared an exquisite treat – Passmore Ranch Reserve Caviar on Pringle potato chip…yum! The Passmores farm their exquisite caviar.

A crowd was forming at the Hawks Restaurant booth (Sacramento). Here, Chefs Michael Fagnoni and Ed Lopez were actually smoking salmon – literally. The Smoked Big Glory Bay King Salmon (corn pancakes and candy bacon syrup) were so succulent…demure yet satisfying. I could have eaten ten of these. 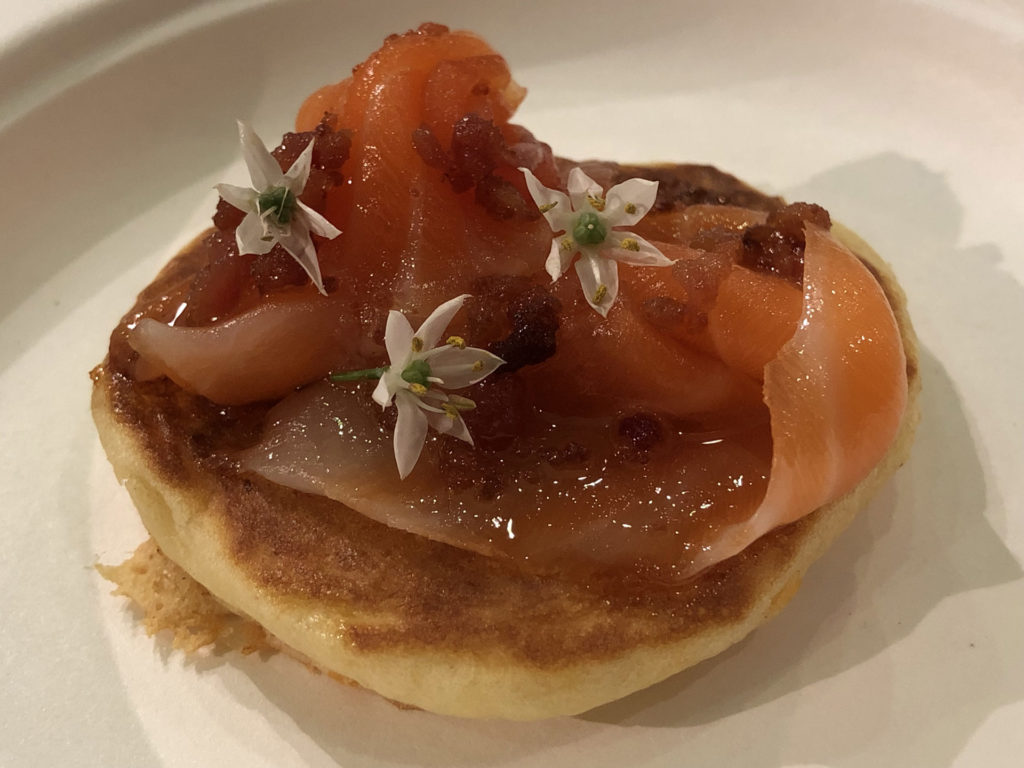 I was finally back in the spirit of celebrating, as I sipped a spirited pinot noir from Kosta Browne (2016 Cerise Vineyard, Anderson Valley). It was a medium bodied, earthy red, with notes of dark fruit. Some other delightful tastes came from Acumen Wines, Round Pond Estate, and Maison D’Amis. 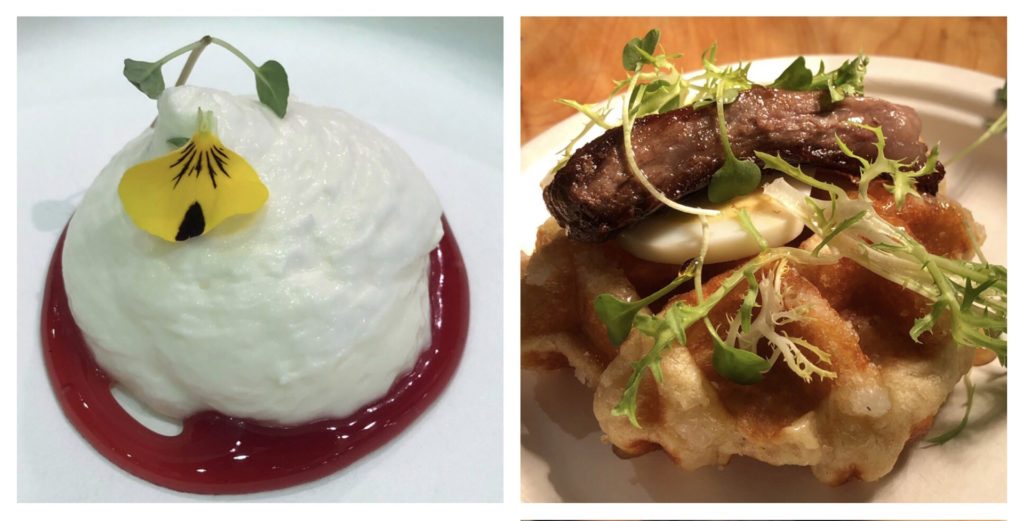 I spotted the same raucous crew from SLAB laughing and creating a scene. For the Sunday Brunch extravaganza, SLAB offered up a true New York dish and one of my favorites – A Taste of Pastrami Monday’s (rye bread crostini, Russian dressing, pastrami, slaw and pickled mustard seed). This was a fantastic tribute to the signature NY dish, and I loved every bit. As I walked past the line of people waiting for their turn, I said, “OMG…it is definitely worth the wait.” 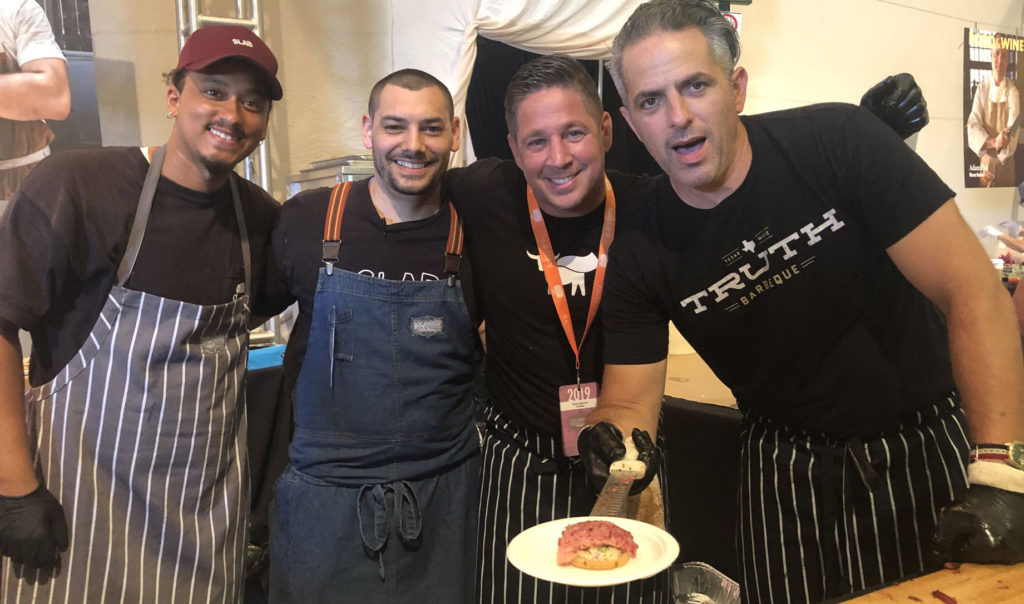 The wine was flowing at both of the LAFW events that I attended. There were also other options for attendees who prefer spirits, such as Bulliet Bourbon, plus mixed drinks offering vodka, tequila, etc. One could also enjoy a softer alternative such as an Aperol Spritz or a variety of beers including Guinness.

Chef Jeff Jake from Fairmont Grand Del Mar kept attendees coming back with his ‘Lobster Chino Farms Melon & Aromatics.’ I adored the pairing of the sweet melon with the fresh lobster (which was perfectly cooked). Anyone who somehow missed out on this dish should head to the Fairmont, because it was truly special. 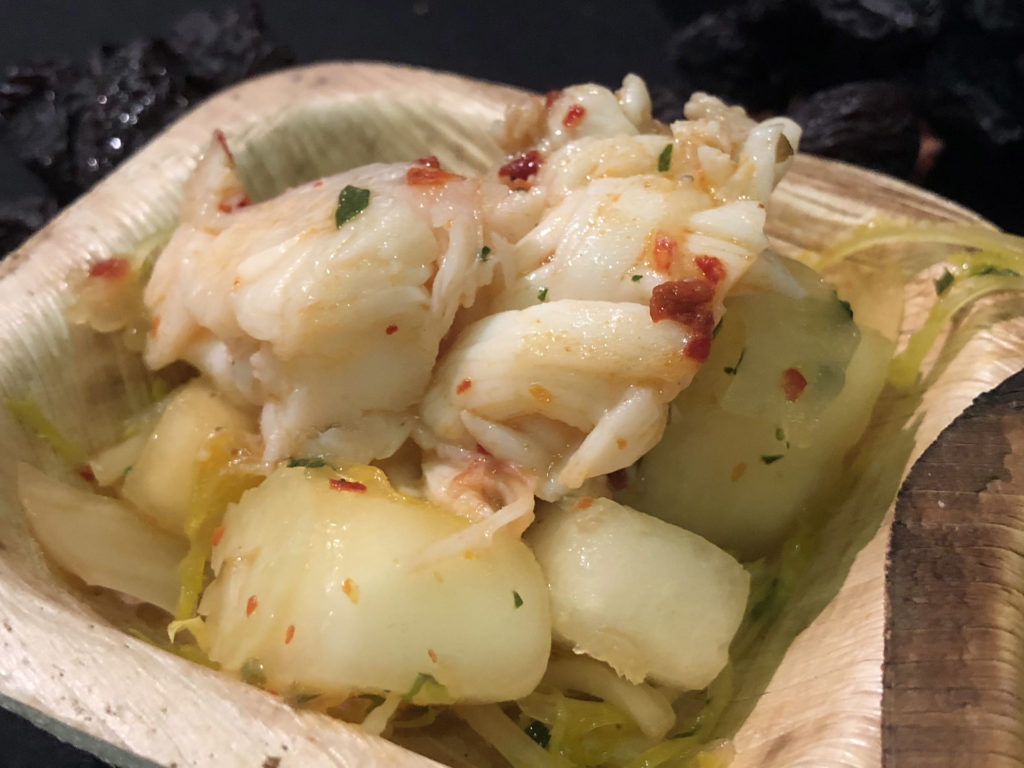 It was the second year that the Malibu Beach Inn Hotel & Spa’s Carbon Beach Club Restaurant participated in LAFW. Hotel Manager Erin Poders said he had a great time. “It was a giant success and everyone loved our dish and gave us great feedback. I love events like this!” Chef Ryan Caldwell presented a divine Chicken Liver Parfait (with everything granola and grilled peach). 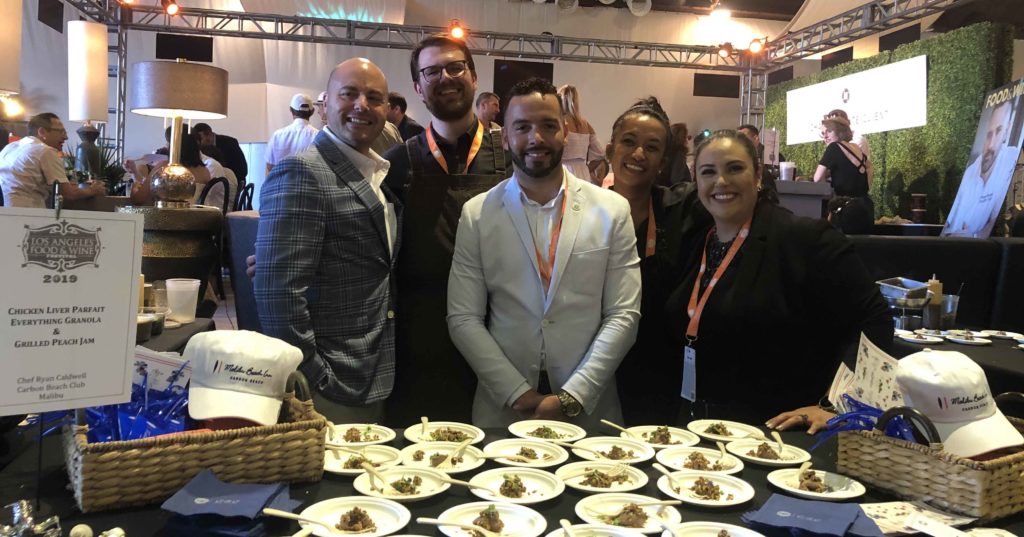 Chef Frances Dimitrius of the Wayfarer Downtown LA made his mark at the event with a brightly colored eggs. His take on an egg (Ouefs, mimosa lobster caviar and bacon dust) was magnificent. He created sumptuous ouefs featuring a delicate, yet complex blend of flavor. I must confess, this was one of my all-time favorite tastes. I did return for seconds. 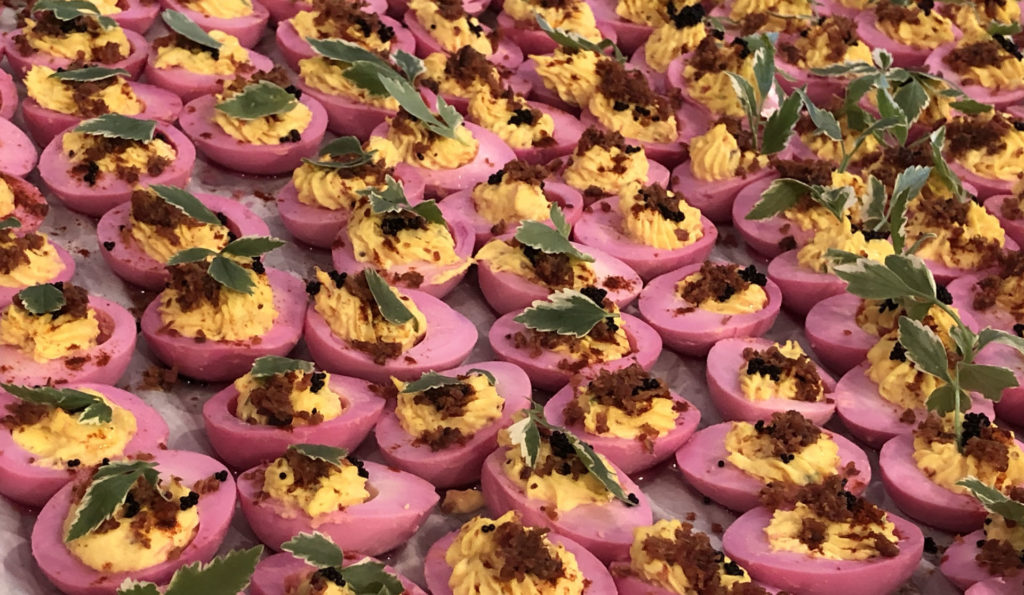 I had just enough room in my tummy for something sweet. The ultimate gourmet ice cream sandwich was beautifully presented by Chef Tyler Malek of the very popular Salt & Straw…an ice cream shop making waves across the nation. The sensuous buttermilk custard was sandwiched between a grilled pancake and topped with hot maple fudge.

When I was just about too full to eat anymore, I came across 189 by Dominique Ansel. I was tempted by a chocolate chip cookie cup that held its own milk….it was called a shot. Cold-infused Tahitian vanilla milk was poured into this delicious edible cup. As I sipped the milk, I munched the side of the cookie. Cool milk and cookie rushed towards my taste buds. OMG…this was truly amazing. 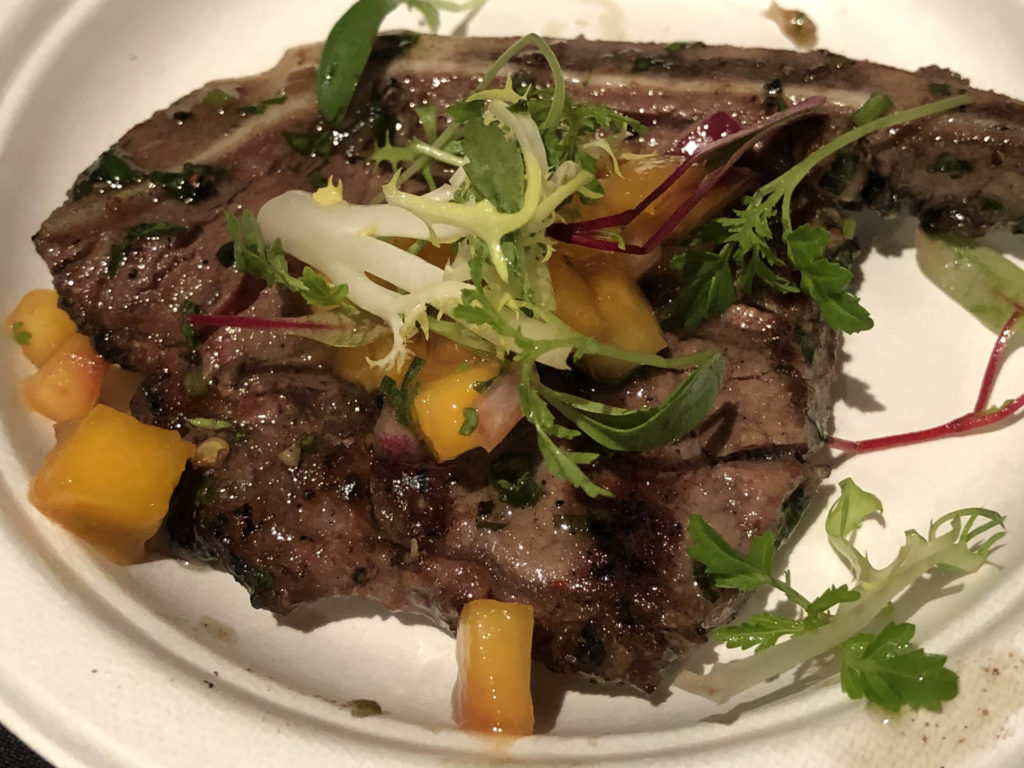 STK Los Angeles…More than a Bite!

All in all, it was a fantastic event and a great way to discover the best new restaurants. Each year, new ideas and trends are revealed, and stand-out chefs take center stage. I’m already looking forward to next year.

2022 UPDATE: Unfortunately for all of us The TASTE event is no longer taking place and the website has been shut down. See ETG’s Destinations Section for a full list of food festivals or CLICK HERE for a direct link to the best LA annual Food Events.Visit the Stories Section; under Dining Drinking – the Events Page to read reviews of these food events or CLICK HERE for the direct link.