Landscape photographer Tim Truby loves to travel. He tells us how he captured this photo: “It was my third trip to Iceland, my second time around the Ring Road — researching a landscape photo book. Shooting the country along the 1,000 mile Ring Road was phenomenal. But even with hundreds of images of the Seljalandsfoss waterfall, I had nothing usable. 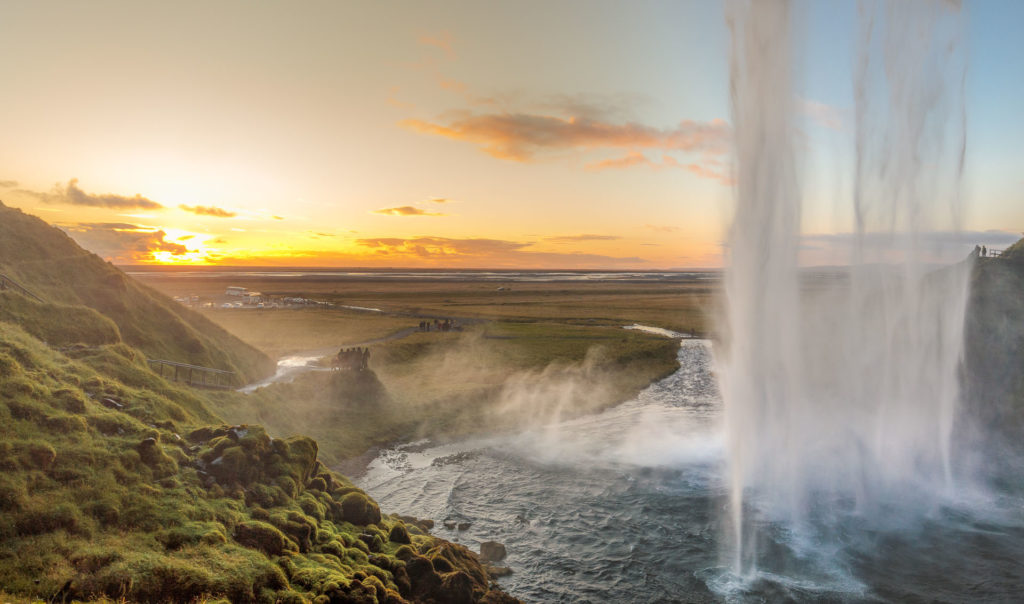 Seljalandsfoss is one of Iceland’s most iconic spots, a high waterfall backed by a mossy, womb-like cave.  On my March and May trips, the waterfall had been mired in cold rain and snow. It was August now, my final chance at Seljalandsfoss before flying home.

I was eating in Vik that final evening when I noticed the sky clearing. And as I drove, I got into shot planning mode. The waterfall is 40 miles off on a 2-lane blacktop – less than an hour of light. I got there in 40 minutes with the last tour buses heading home. Grabbed my wide angle and tripod. The Seljalandsfoss cave is like a vast, cold steam room so I adjusted settings before heading in.

I walked the dark, muddy path to see how the shot elements aligned. The falls and stream were a leading line, the misty sunset was magical as was the soft, backlit moss. Found my spot. I stood, back to the wall, breathed it all in, shot. Wiped the lens off, rebalanced. Another shot, wiped the lens, another, as the sun set.”

Landscape photographer Tim Truby’s photography was most recently exhibited at Arches Gallery, in San Pedro. He has published two landscape photography books and has shown at various LA galleries and juried shows. He was also a First Place winner at the 2019 OC Fair Photo Contest.