This article is part two of a three-article series – Finding Love Later in Life.

After finally finding each other, my husband and I knew we wanted to jumpstart our marriage with a fantastic honeymoon. Living in Los Angeles, Kauai was an obvious destination choice…all I wanted to do was chill and drink mai tais. Richie (as I often call him) wanted to surf, snorkel and hike. We used Homeaway to find a perfect place in Koloa which offered fantastic views of the surrounding mountains, a lush garden setting and rainbows right outside our rental. For this particular trip, we wanted a little more privacy than most hotels offer, for obvious reasons. 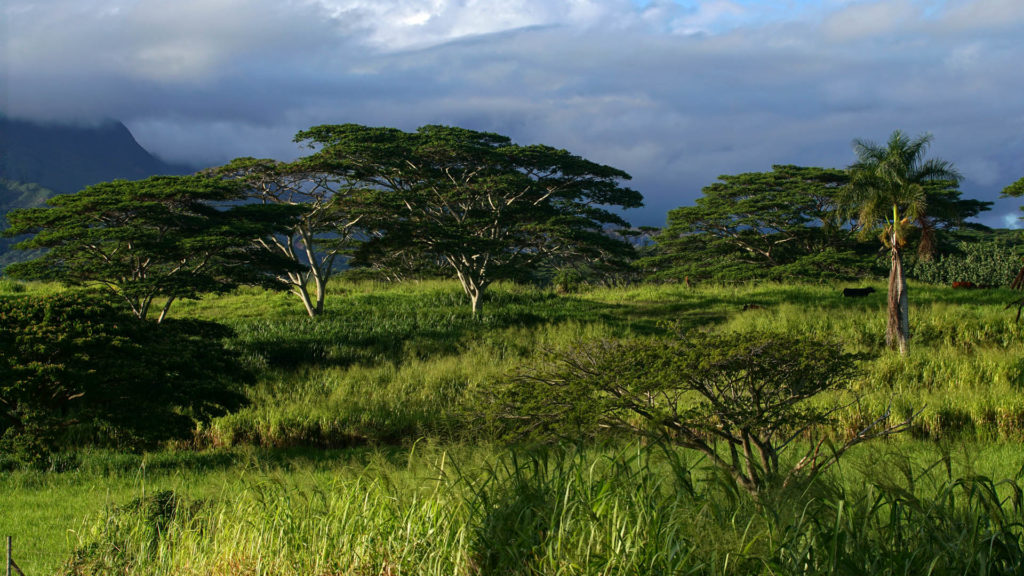 Despite the fact that I wanted to chill, we both agreed we didn’t want to miss all of the natural wonders around us. We booked two boat trips and a helicopter tour of the Na Pali coast on the first day. Then we arranged our plans to begin dining all over the island, which I was greatly looking forward to doing…I did get to relax later.

This was my second time in Kauai, which has now become over-populated with roosters and chickens. Apparently, Hurricane Iniki hit Kauai in 1992 and freed these birds which have now taken over the island…in a charming way. The roosters ended up setting our schedule, reminding us to get up and explore the island each day at 6 am. It was great for our early morning tours, and we ended up partaking in many happy hours due to our early bedtime. So it all worked out, and we did get used to our feathered friends. One of the best ways to see Kauai is on a boat. Within a day of arriving, we were scheduled to take a seven-hour boat tour (Niihau + Napali Super Tour) with Holo Holo Charters. This was a fantastic tour with unbelievable views, plus the crew spotted dolphins and turtles…we all grabbed our cameras.

The crew members were all so accommodating. Ahren Kaneshiro knew just how to nudge practically every couple on the boat to take a photo in front of a waterfall, as he coaxed us to kiss, making for some memorable photos. Kaneshiro was born in Kauai and has been with Holo Holo for four years (as of 2018). The tour included a lovely lunch.

After seeing the Na Pali Coast in the morning, we decided to take a sunset cruise from a different tour company, to catch the late afternoon light for photos…Capt Andy’s Kauai Boat Tours was our choice, and it worked out great. The crew was a lively bunch – Bernard Matsumoto has worked with Capt Andy’s for twenty-five years. A skilled captain, he was equally adept at doing stand-up comedy…and kept the passengers and crew relaxed and laughing, as he instructed us on where to find the lifejackets, in case of an emergency. October sunsets, and these late afternoon tours, get you on the water at a perfect time (for lighting) to create beautiful images of the Na Pali Coast. The dinner was delicious and seconds were encouraged, much to the delight of my husband. We also saw dolphins and a brilliant sunset. 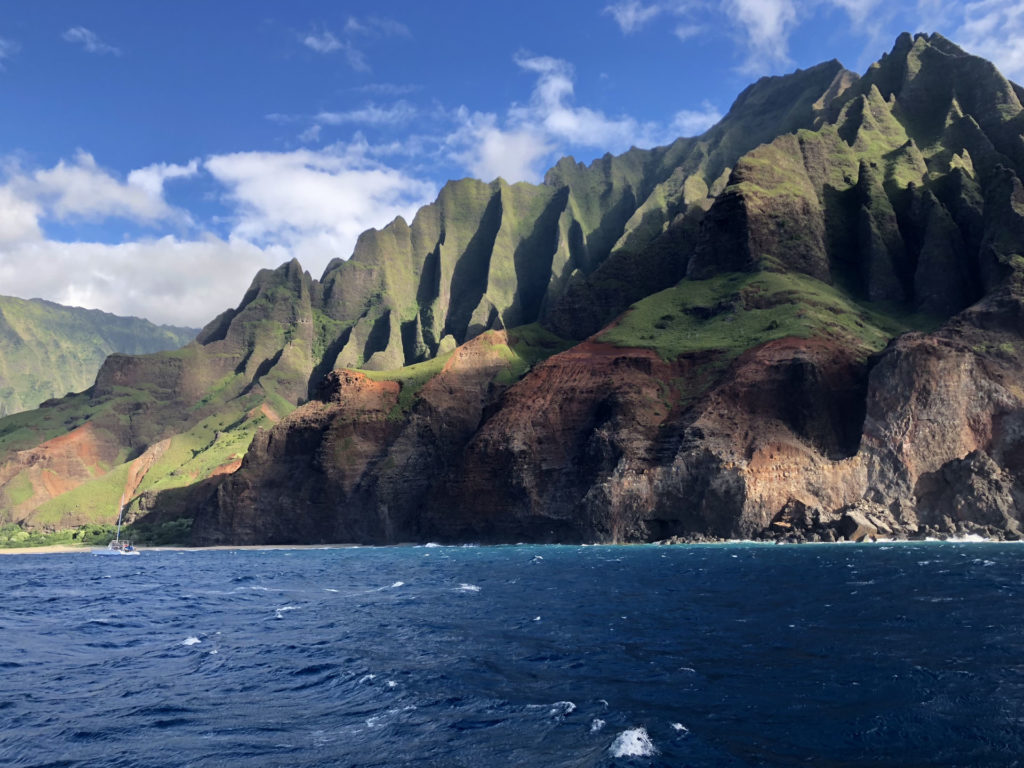 Richard is passionate about his landscape photography, so it was time for me to accompany him on a “short” hike, to shoot near Waimea Canyon (where Jurassic Falls can be seen on clear days.) and near Kalalau Lookout, with views of Kalalau Valley and the Na Pali Coast’s breathtaking geographic features. Dubbed as the Grand Canyon of the Pacific, Waimea Canyon is about ten miles long and up to 3,600 feet deep. There are several outlooks that one can drive to, but there are also side trails to take, if you want to hike. 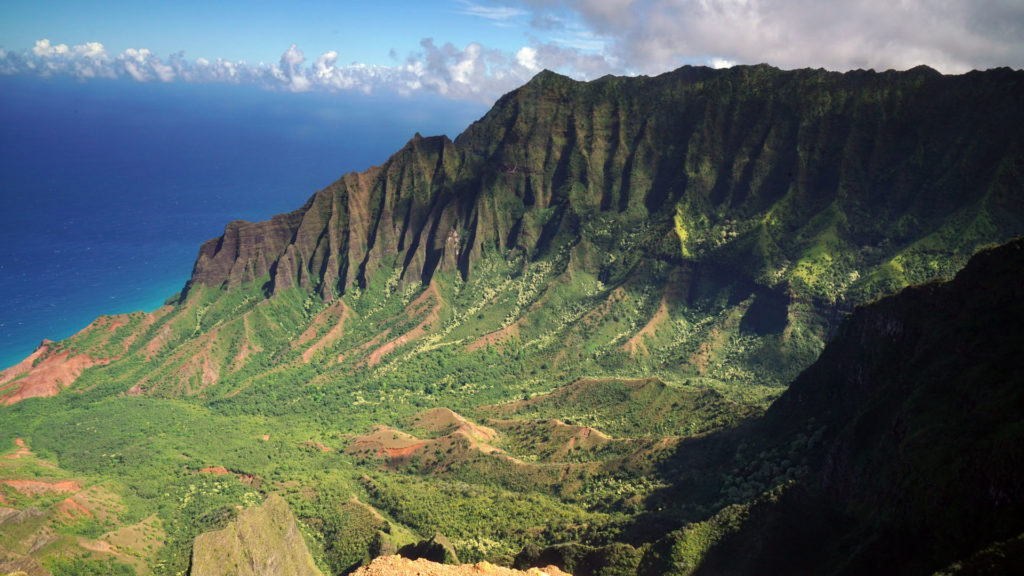 Having arrived at the canyon on a day and time with amazing weather, we were able to get some great shots quickly, so we headed up to Kalalau Lookout in hopes of getting a clear view from this world-class vantage point. The weather was perfect, and we ended up following a group of youngsters onto a trail which led out towards the sea. The Kalepa Ridge trail, which is part of the Koke’e State Park, was a bit too strenuous for me, so I decided to bail. Even Richie had to cut his hike short after realizing we would not make our dinner reservations, if he didn’t turn around. The views from many of the lookouts (that can be reached by car) are stupendous, even without hiking. https://hawaiistateparks.org

Of course, after all that hiking I needed a day at the spa, and my husband whole-heartedly agreed. As you can tell, he is more of an adventure seeker than I am, and he had plans for his day – surfing, snorkeling and taking pictures. 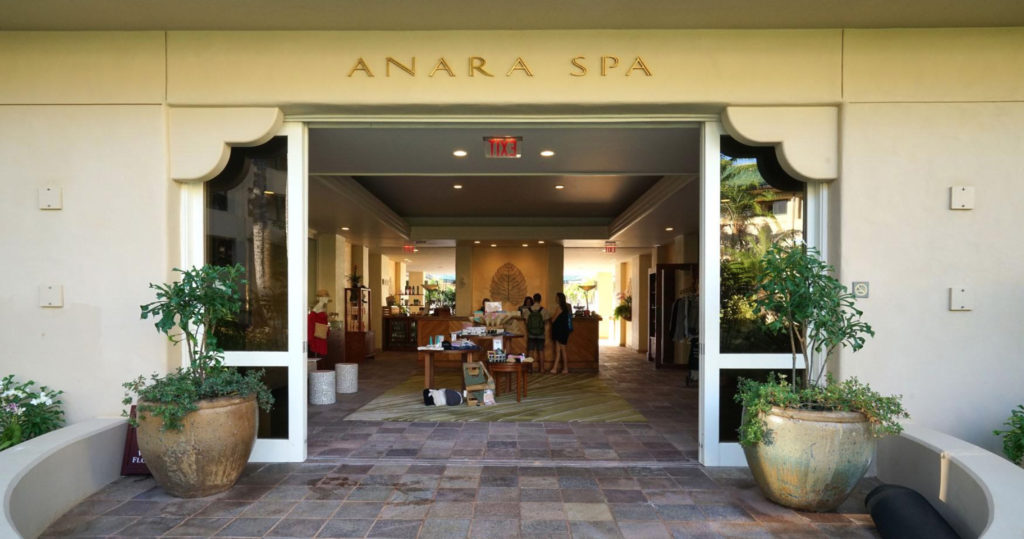 The Grand Hyatt Kauai Resort and Spa knows just how to help you relax. If you are not staying at this beautiful hotel, located in Poipu, book a massage there anyway. You’ll receive a spa pass for the entire day. I had a fabulous massage and enjoyed the steam room and jacuzzi, then spent time relaxing by the pool sipping champagne. I think it was good for my husband and I to do our own thing one day. Richie ended up getting some great photos of waves, surfed at Shipwrecks Beach and shared some time with a turtle. I pampered myself at a world-class luxury spa by the sea. https://www.hyatt.com 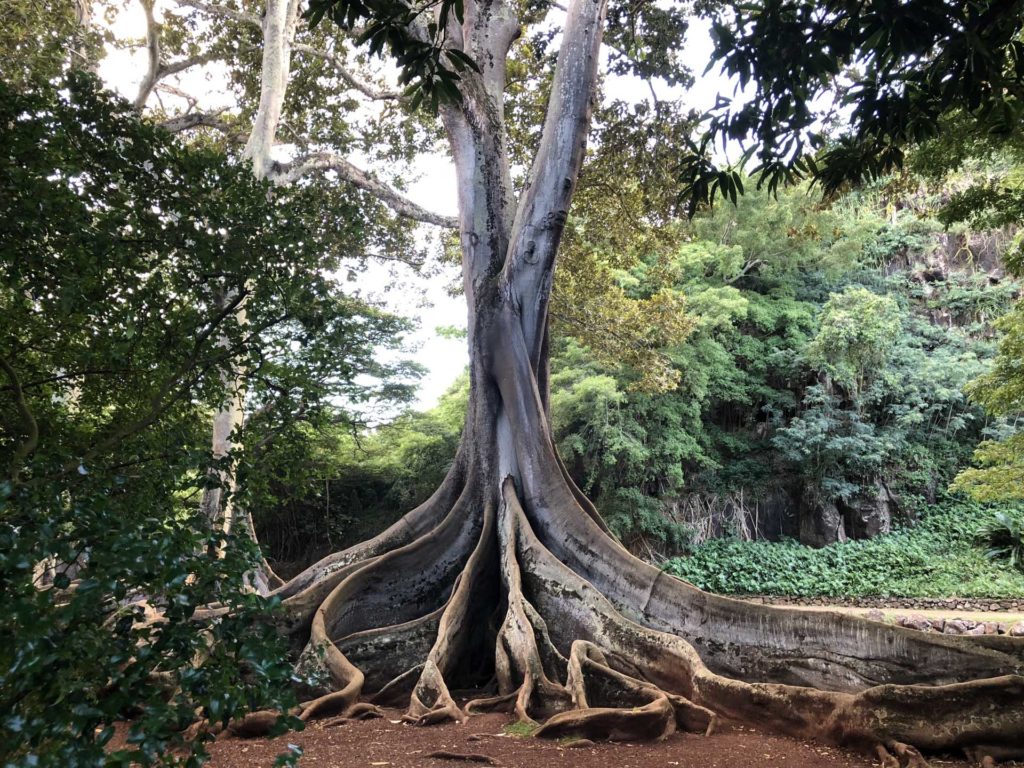 The next day, we decided to do a much easier walk with a guided tour at the lush National Tropical Botanical Gardens. We found out why so many well-known movies were shot in Allerton Gardens, such as Jurassic Park, Pirates of the Caribbean, and many more…it is so beautiful. We shared a kiss under those legendary Moreton Bay fig trees. These majestic guardians made famous from Jurassic Park, were the stars of our photos that day. https://ntbg.org/ 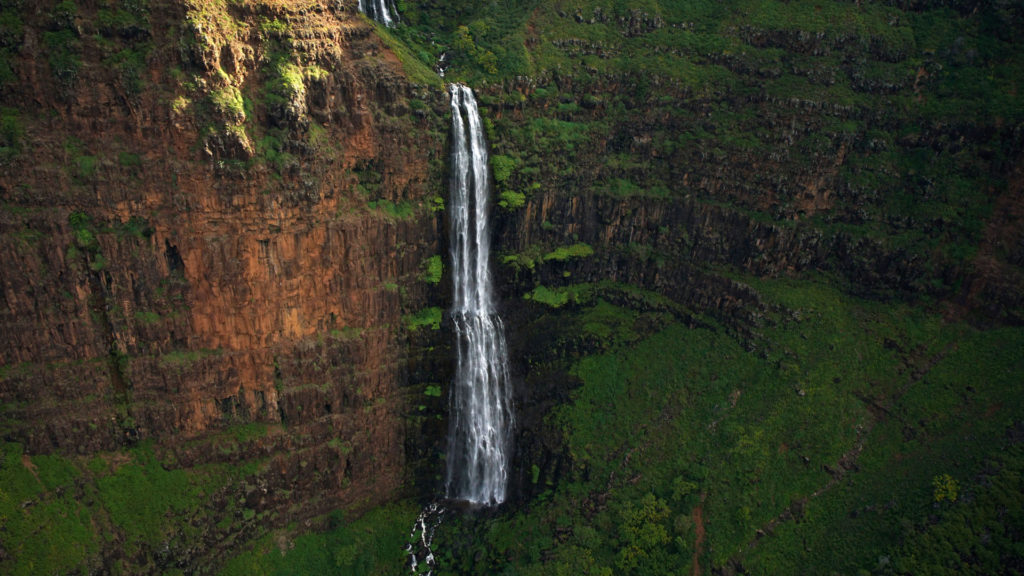 It was my husband’s dream to take photos from the sky in Kauai…so of course he insisted on a helicopter with no doors. After interviewing a few of the tour company’s sales reps, we chose Mauna Loa Helicopter Tours, one of the few companies with this option. It was obvious that pilot Blake Andrews has a true love for the island of Kauai. He has been flying in Hawaii for seven years, with three years on the Big Island. He has worked four and a half years with Mauna Loa Helicopter Tours. Blake explained that safety is the company’s first priority. “She’s a beautiful island but she has her moods.” He added that depending on the weather, trips can be cancelled at any time. We were both mesmerized by the views. This was a once-in-a-lifetime experience. http://maunaloahelicoptertours.com 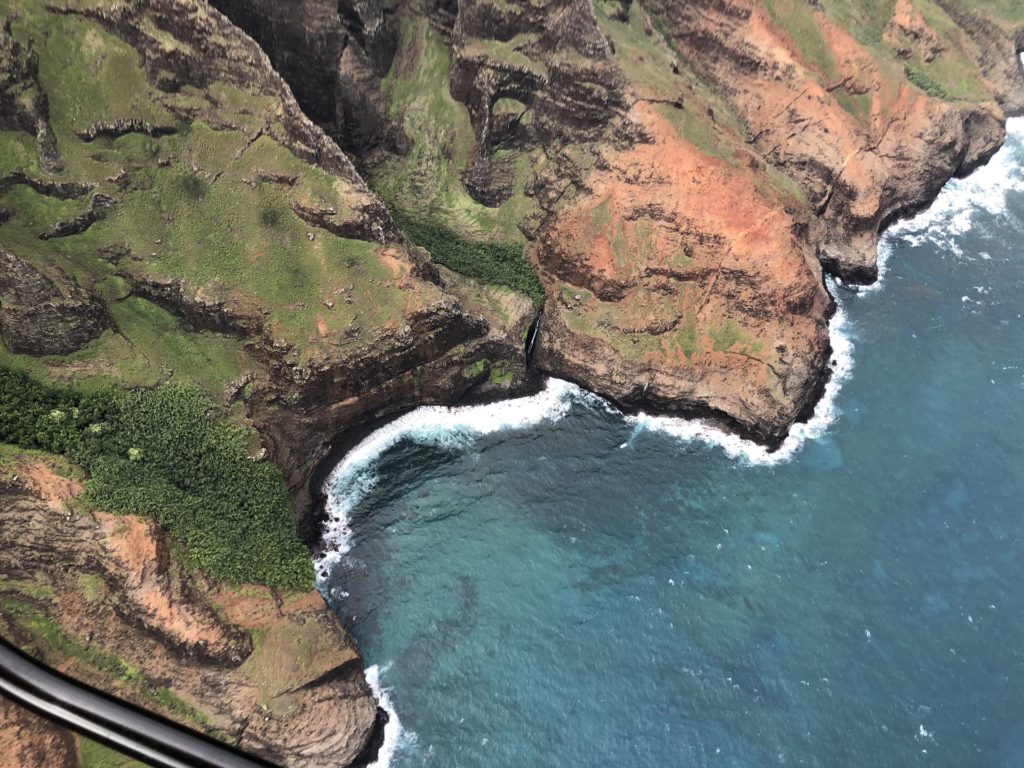 Read article # 3 – The Honeymoon Continues…Foodie Heaven, Finding Love # 3. Be sure to consider Kauai when planning your next trip…it’s an incredible island, even if it’s not your honeymoon. Visit https://www.gohawaii.com/islands/kauai