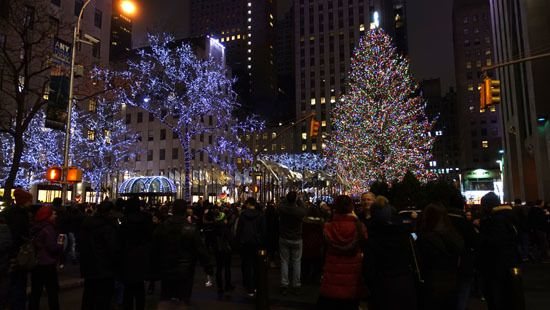 Rockefeller Center during the holidays; photo by Richard Bilow; courtesy of ETG

New York City is THE place to be during the holidays! If you want to impress your date…visit Rockefeller Center, Fifth Avenue, Radio City Music Hall, and many more beloved iconic tourist spots. They are all decked out celebrating the season, attracting even more visitors than usual. I was raised and born in this city, so my friends and fellow New Yorkers (as always) did not hold back about the state of their beloved city at this particular moment in time. The gridlock from heightened security along with a bomb scare at Trump Tower took a lot of fun out of visiting some of the traditional hot spots. Although Lin-Manuel Miranda’s Hamilton is still a hard ticket to get, I did get to catch Dear Evan Hanson, a wonderful new show on Broadway (and deserves its own article). I also ventured down to see the Rockefeller Center Christmas tree in all its glory.

Luckily, Manhattan is home to an assortment of charming neighborhoods that were not affected by the influx of new security some of which are located in Harlem. Much of Harlem has completely changed since I was in high school. I grew up in the Bronx, but went to school in Manhattan. Harlem always offered exceptional music…my friends and I would often venture to the rough and rowdy neighborhood of West Harlem for its classic blues/jazz. Visiting Harlem after all these years was eye-opening. It has managed to keep some of the retro soulful dives alive, while the new conglomerates sidle up next to them. 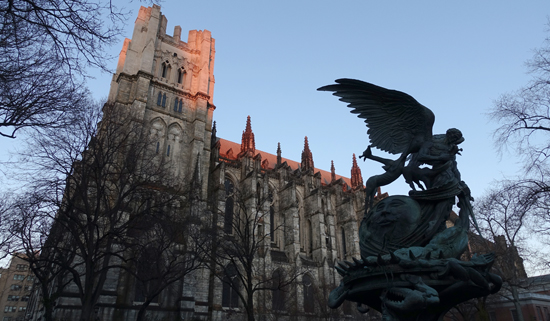 First off, the churches are magnificent. Music and art is abundant with venues such as the famed Apollo Theater, Bill’s Place, and the Studio Museum hosting exceptional talents. Then there is the food…with longtime restaurants such as Sylvia’s and Rao’s, new restaurants and old collide in this classic, yet trendy explosion of flavor and vibe.

A Harlem local told me to stop by the Sea & Sea Fish Market on 116th and Lenox for an amazing deal and great grub. This place brought me back to my youth when I spent summers in Coney Island. The fish was tasty and mighty plentiful. For just $6, I received three fresh fried flounder filets with bread. Another option…and larger meal of scallops, shrimp, fish and fries was priced at just $8. One can order other items such as fried shrimp, calamari, and clams – basically any fish in the store can be filleted and cooked for you. It truly was an unbelievably delicious deal. Sea & Sea Fish Market, NYC 62 W 116th St (at Lenox Ave), New York, NY 10026; 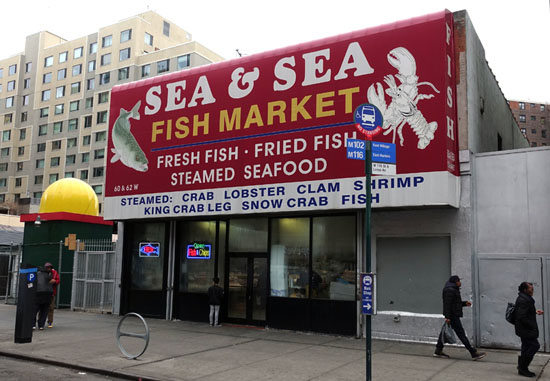 While exploring West Harlem on another day, my travel companion and I spotted a dive bar called Paris Blues. Outside, there stood a sign promoting the Les Goodson Soul Jazz Band that evening. We returned at 9pm to check out the band. The bar soon filled up…standing room only.

I met owner Samuel (Sam) Hargress, Jr., who revealed he just turned eighty. He had always been a lover of music and opened Paris Blues fifty-eight years ago. When I asked if the name was inspired by the Paul Newman, Sydney Poitier, Joanne Woodward movie with the same name, he replied, “No, it was inspired by my family’s history with the Harlem Hellfighters in Paris.” Les Goodson’s band was delightful and played instrumentals by Herbie Hancock, John Coltrane, Miles Davis plus a few holiday classics (with vocals) such as “Chestnuts Roasting on an Open Fire.” Paris Blues, 2021 Adam Clayton Powell Jr Blvd, New York, NY 10027; 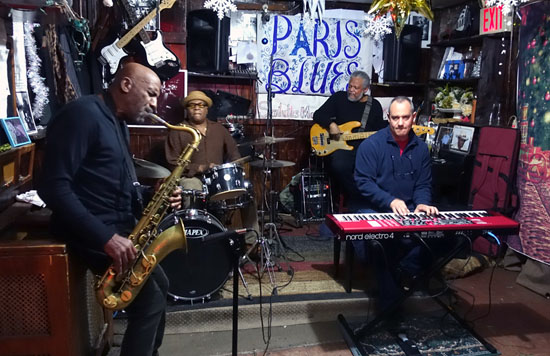 Later in the week…I headed downtown to the Flatiron District (the Flatiron building is located at 23rd and Fifth Avenue) to connect with longtime friend Robin Jones. A foodie, like me, Robin usually knows all the best places to eat in New York City. Whenever I visit, I like to check in with her to find out about new eateries. We popped by the Belgium Beer Cafe across from Madison Square Park to catch up. Home to a large array of rare beers, the charming café was beautifully decorated with holiday cheer. Robin and I enjoyed a refreshing Leffe Brun, which is quite hard to find on tap. Belgium Beer Café, 220 5th Ave., New York, NY 10001; http://www.belgianbeercafe.us/

Katz’s Deli is one of my all-time favorite deli’s in the city. Head downtown to the East Village (yes, there may be a line, but it’s worth it). Also nearby, enjoy other charming neighborhoods – take in some art in Soho or stay for dinner in local eateries in Little Italy or Chinatown.

Central Park is gorgeous after a fresh snow…and becomes a blissful haven in the springtime, alive with vibrant colors. Museums are a must see when in the Big Apple…my favorites are MoMA and the Whitney…the new location is just fantastic. Don’t miss the hi-line, which starts right there and offers a walking tour (amidst Manhattan’s buildings) through the city via the Westside. See my articles from a previous trip to NYC…CLICK HERE to read about the Whitney on the Arts Page – under the Annual Events drop-down.  Here is another article on our sister site LAArtParty article featuring the the Art Galleries of NYC.

New York is an amazing city to visit anytime, but during the holidays – there is just something magical that happens! I’ll be back another time to check out more restaurants, music, and art. Plan your next trip to the city that never sleeps! 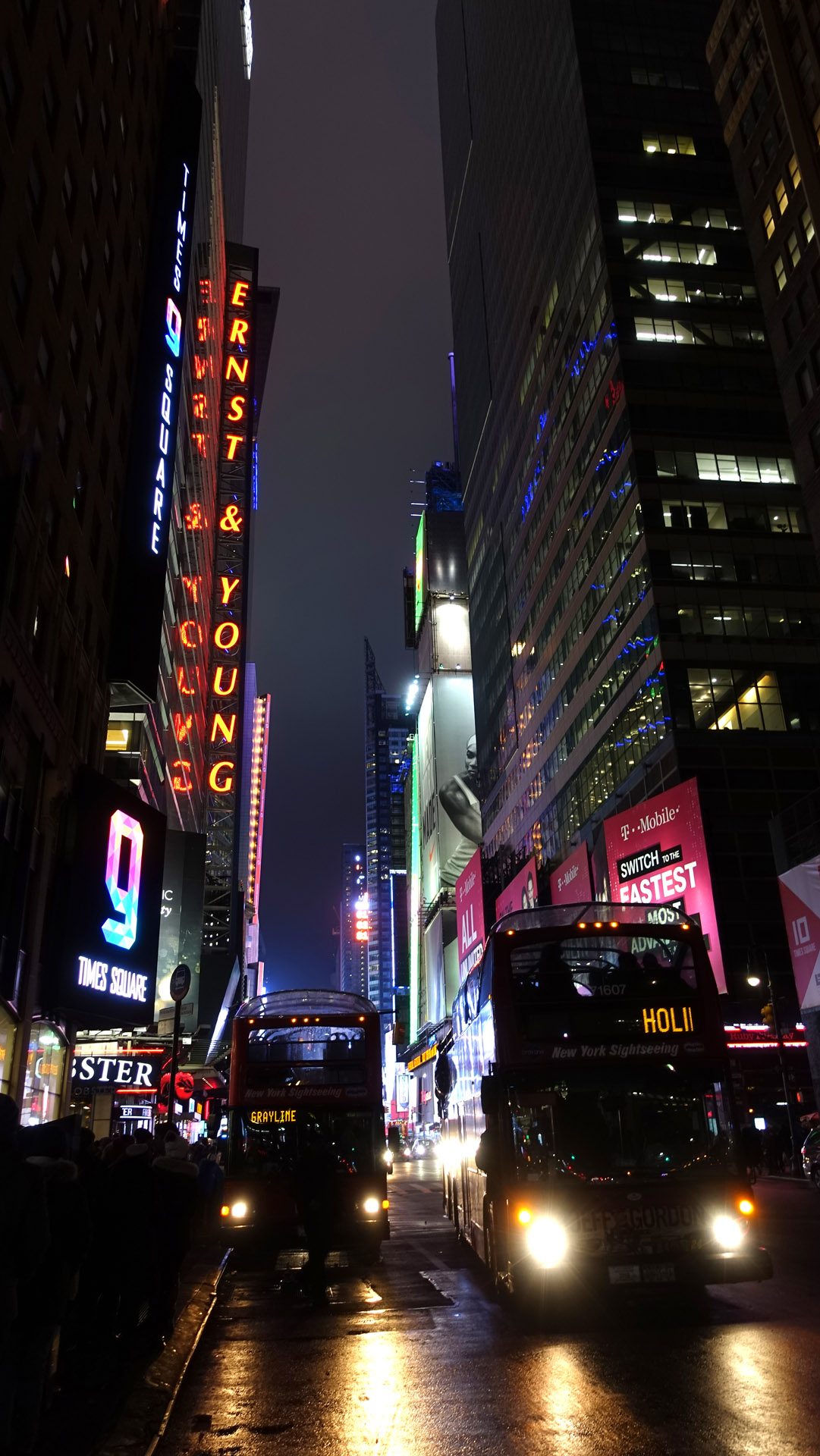