Celebrating the Chinese New Year (the Lunar New Year) has always been a fun thing to do. My mother used to take me as a kid in NYC, and then when I moved to LA I started up the tradition once again. It started with a group of my friends all heading downtown to see the Golden Dragon Lunar New Year Parade. Then my husband joined the group as well. One year, it was just us, and we had an amazing, quite romantic time. Chinatown is located downtown Los Angeles…not far from Dodgers Stadium. The annual festival has been taking place since 1899, and offers a parade, and it’s like a huge party for foodies. CLICK HERE if you would like to know the history of the parade, along with additional info. CLICK HERE for a list of the best traditional Restaurants in Chinatown – Staff Picks! 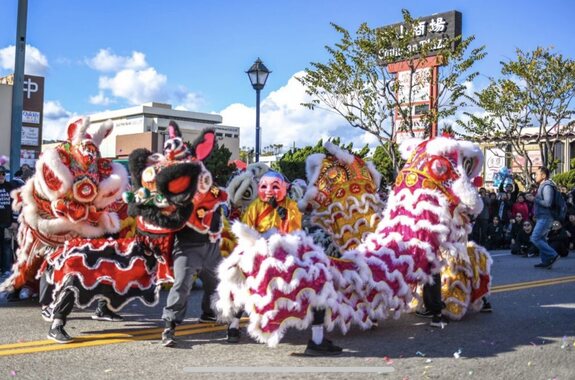 We headed downtown EARLY to celebrate the New Year. It’s a great time for families as well…to see the annual parade and embrace this decadent culture. We grabbed a spot to view the parade super early, and got friendly with another couple visiting from South Dakota…they were young and on their honeymoon – such a sweet pair. We ended up inviting them to join us for dinner, then we stayed in Chinatown late, while enjoying the holiday excitement. ETG TiP: Leave just before the end of the parade to secure a spot at one of the local restaurants.

The parade usually starts at the intersection of Hill and Ord Streets with vendors, entertainment stages surrounding the area. We usually meet our crew at the Chinatown Central Plaza, 943-951 N. Broadway, Chinatown.

We popped into Hop Louie for some tasty grub just before the crowds started to pile in. Unfortunately Hop Louie shut down after a 75 year run, but there are lots of other great restaurants that you can enjoy during the New Year celebrations.

One of our favorites became another longtime restaurant named Yang Chow which was founded in 1977. Created by a family of five brothers, the restaurant was named after their hometown. “Slippery Shrimp” is the most popular dish. It is a large restaurant, originally converted from a former diner into a two room eatery, located beneath the Bing Wong Hotel. 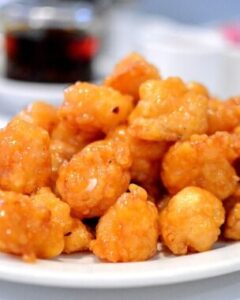 “Slippery Shrimp” from Yang Chow; photo courtesy of the restaurant

Rich and I ended up remaining downtown through the evening, shopping, snuggling and enjoying the romantic lights of Chinatown. While we were there, we stopped by the famous art street Chung King Road is also a fantastic place to visit. All of the galleries often host art parties on the same night. We often go down on a Saturday night to view the art, but most of the galleries will be open during the parade, so save time to pop in after dinner. Visit ETG’s sister site for listings about the best art parties – LAArtParty.com

The date of the Lunar year fluctuates between January 21 and February 20 each year, so check for dates at the Chinese Chamber of Commerce website which presents the annual parade each year – http://www.lachinesechamber.org 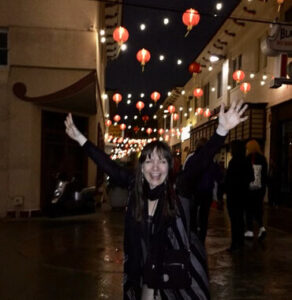