In addition to being the co-founder, contributor and photographer for EatTravelgo.com, Richard Bilow has been working as a photographer and an aquatic artist for over thirty-five years. Like many photographers, at any given moment you can find Richard with his camera searching for that special shot. He arrived at Zuma beach at the perfect time to catch this photo “Big Air.” 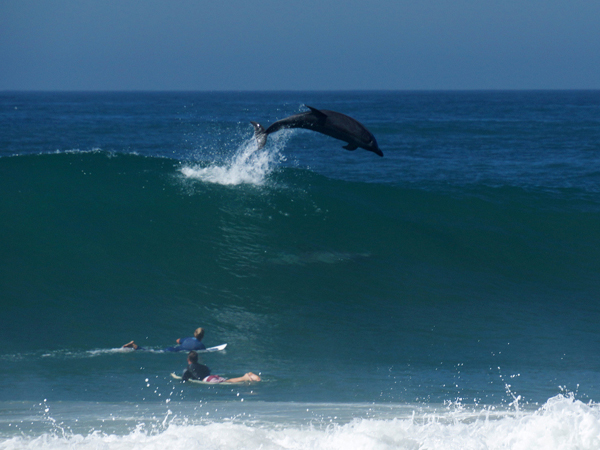 “Most people think this shot is a photoshop composite, but it’s not. I was photographing some of the best waves I had ever seen at Zuma Beach (near Malibu California). This was day two of a big hurricane swell which had produced 25′ waves the day before at The Wedge, a world famous surf break in Newport Beach. I was at the Wedge on day one, when a friend called me from Zuma to tell me the waves there were epic. I was happy at the Wedge, enjoying a very special place on a very special day, but Zuma is where I went in my youth with my friends. So, I knew I had to be there the following day. The swell and weather forecast gave me confidence, that the waves would still be great for photos. I arrived at sunrise and was quite pleased to witness perfect conditions for photography. As is often the case, local dolphin were enjoying the surf as much as the surfers were. Small groups of the marine mammals were jumping like crazy down the beach. I got some interesting photos, but they were pretty far away. I considered running down there to shoot from closer range. I decided that made no sense however, because I could not predict where they would jump next, maybe right in front of me where I already was. That is the though I still had in my mind, when I noticed a single dolphin swimming under a wave directly in front of me. I raised the camera as I thought to myself JUMP, and unbelievably the dolphin heard my inner call. I pressed the shutter immediately. I was so ready that my timing was perfectly matched with the brief delay of the camera’s response, capturing this perfect moment.”

Richard Bilow’s work has been published in the Robb Report, SPACE Magazine, CMM, The Santa Monica Mirror and more. https://custom-aquariums.carbonmade.com/