Review: Greece is the Word by Nicole McClinton

My best friend (Jezelle Fullwood) and I (Nicole) love to travel the world together. This time, the trip was to celebrate a big birthday for her. We decided to get a trip from the Beverly Hills Firefighters’ Association’s annual Backdraft Ball. It’s a little known secret, but you can get great deals through auctions at charity events. Of the silent auction choices, it was between Italy, Greece, and Maldives. We ended up with Greece, because we wanted to be surrounded by beauty and learn a thing or two about history. Also, the price was right!  We had no idea what a magical, wonderful, unforgettably amazing time we’d have.

Athens
When we pulled up to our first Greek hotel, the taxi driver told us that the Hotel Grand Bretagne was one of the oldest and best in Athens. The hotel did not disappoint. The staff was amazing. Our room came with butler service and complimentary spa access. But, the most spectacular thing was the site we were in for at dinner. After changing out of our travel clothes, we went to the rooftop restaurant, where we enjoyed a nice glass of wine and an Aperol Spritz. We were truly elated when given a table with a clear view of the night time Acropolis, lit up in splendor.

After dinner, our first butler, Panos, arranged for us to have a private tour of Athens the following day. We were so pleased to end up with tour guide, Militza, who was an angel with extensive knowledge of Greek history. As we drove all the way up the winding streets, we eventually arrived at the Acropolis, the spectacular site we had seen the night before from our dinner table. The real-life, in-person, you-can-touch-it, you-can-walk-through-it Acropolis took our breath away. 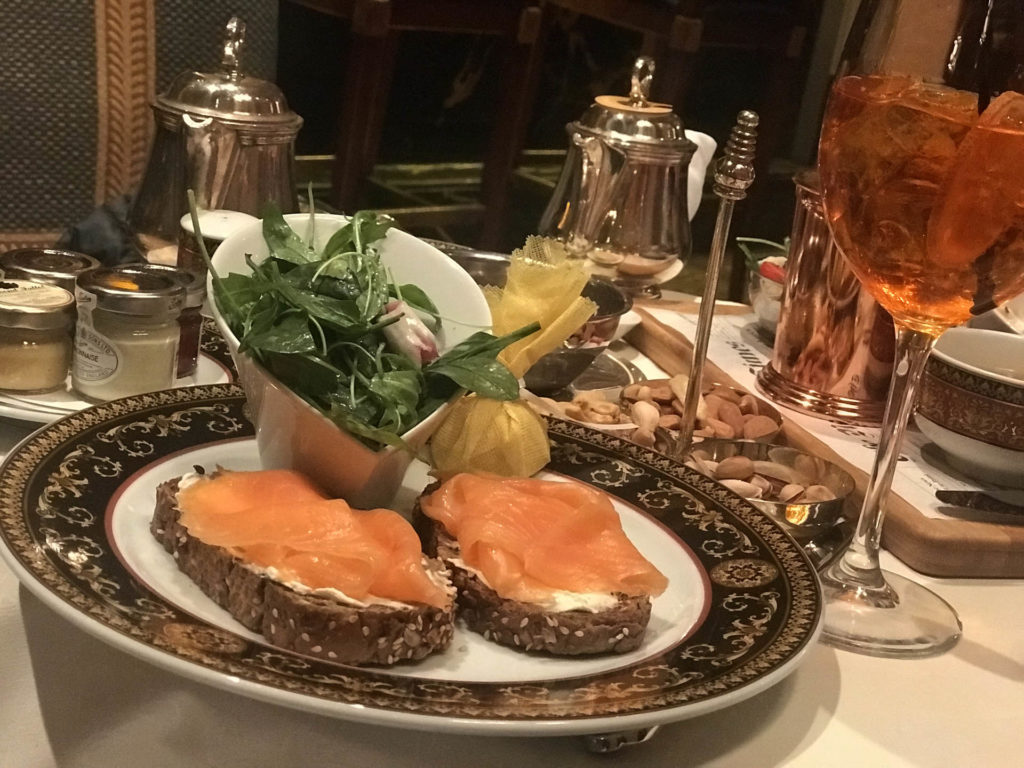 In school we grow up learning a bit of Greek History, but to see the actual Acropolis, which is made up of so many ruins, was incredible.  While we visited pre-season (cutting down the crowds of visitors and allowing us a unique opportunity to leisurely tour the historical monuments) it was a bit cold.  We were thankful for that however, because we couldn’t imagine walking so much (one day more than 20,000 steps) in sweltering heat! From the Temple of Athena Nike to the Parthenon to the Erechtheion, we learned extensive details about the history of the City of Athens, including the seize and destruction of the city by the Persian God-King Xerxes. Yes, I yelled “300” at the Acropolis!

Along the road from the top, we got to visit one of the oldest theaters, the Dionysus Theater, which pre-dated plays and was mostly used for political debate by the Thespians and the Chorus. As we walked down the hill, Militza pointed out the other historical sites that we’d stumble across while walking the streets of Athens over the next couple of days. These sites included the Temple of Olympia Zeus and the first Agoura, where daily business occurred in ancient times. 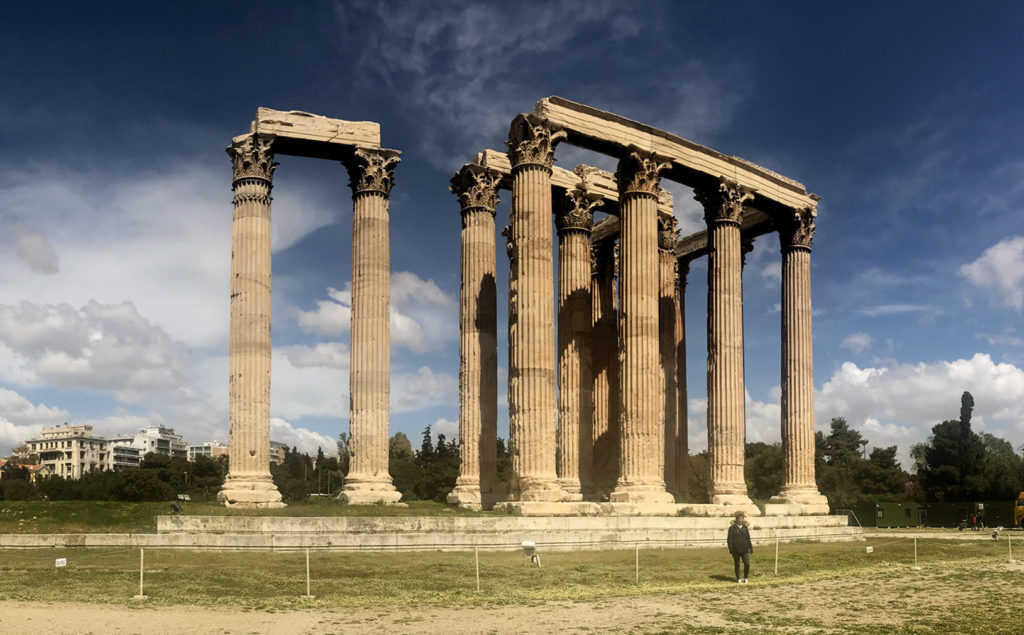 Santorini
From Athens we flew to the island of Santorini, and it was infinitely SPECTACULAR!  Aside from the amazing views in every direction from our room, the architecture and sites of Santorini were stunning, with the stark white walls, blue church domes and heart-stopping sunsets.  Just a heads-up to people traveling by boat – While the Seajet is the quickest way to get you between the islands, if it’s windy, take a flight!  We learned this the hard way, but a good story about being stranded in Athens for the night, due to high winds, is worth it. In the end, we loved Seajet (definitely prefer the larger boat!!!).

At the Lilium Hotel in Santorini, we woke up to our private porch overlooking the infinity pool and the sea. We were greeted every morning by Maria’s huge smile and her generous offers to tell us anything and everything we wanted to know about the island. Our breakfasts were served in a room with a 180 degree view of the caldera and the surrounding little volcanic islands. While walking around our hotel, I saw some of the most awe inspiring sights of my life. The white homes, hotels and other buildings, set against the turquoise and navy blue waters, with red and brown rocky cliffs, adorned with flowers all around, will inspire me for the rest of my life.

If you love history, seeing ruins and learning about different cultures, I suggest you take a tour around the island of Santorini. You’ll get some great stories about how the island was formed, and you’ll visit the ancient ruins of Akrotiri, which kind of makes Pompeii look like a TV show version of the real thing; not to knock Pompeii because it’s fantastic too! You’ll get to have lunch on the water in Perissa, with its black sand beach, eating grilled octopus along with the best Greek salad ever (if you so desire). My personal favorite was dining at the Aquarius restaurant adjacent to the black sands. The food was delicious, not too expensive, and keepsakes were conveniently available for purchase. 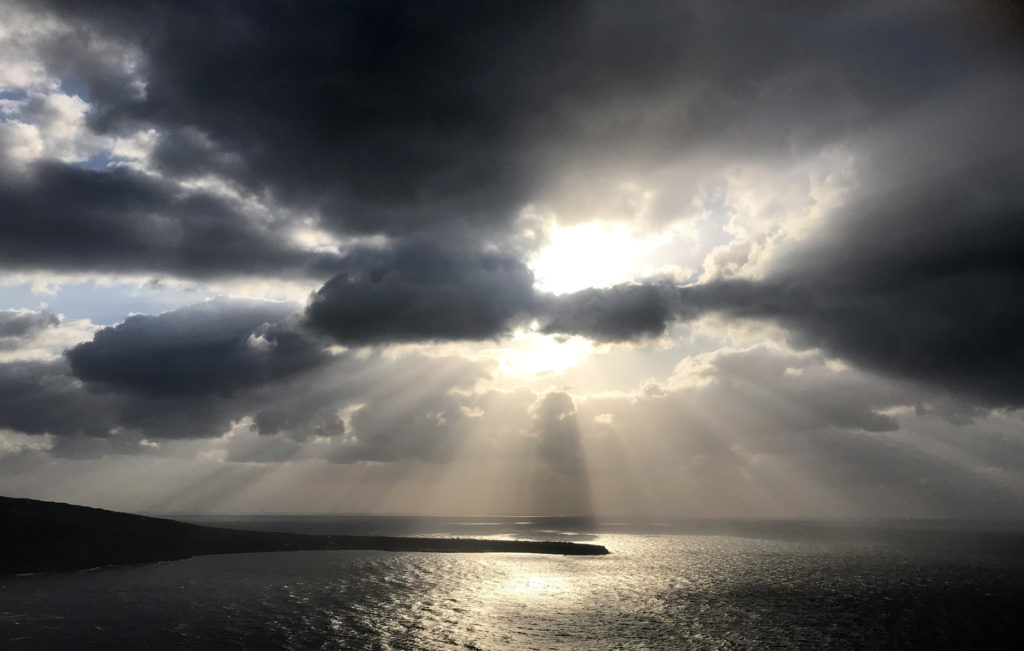 While most people go to Oia (pronounced ee-ya) to view the epic sunsets, the likes of which I’ve never seen, there are also tons of beautiful shops run by locals. We’d like to give a shout out to Maria, at Spilia Cave (#SpiliaCaveOiaSantorini)!  Thanks for helping us choose the gorgeous flowing Greek blouses! But truly, the sunsets in Oia are spectacular. I have picture after picture showing what looks like a painting. But we were actually there!  As we checked out of the Ilium, Maria gave us each coffee table books with remarkable photos of the world that we now knew and loved.

Mykonos
Last, but not least, we traveled via SeaJet from Santorini to Mykonos. We arrived at the Hotel Petinos the day it opened for the season (which is actually pre-season, when they gear up for the masses to arrive for summer).  The hotel was beautiful and situated just at the edge of a peaceful cove, with soft beaches natural sheltered from the Mykonos winds.

Petinos Beach Hotel in Mykonos; photo from porch overlooking the pool and sea; Photo by Nicole McClinton; courtesy of ETG

Our favorite parts of the day were waking up to the fantastic breakfast, which of course included the delightfully obligatory Greek yogurt and honey; and our delicious dinners overlooking the calm waters, as we feasted on lamb chops and stuffed mushrooms. If you go, tell Anastasia we say hi! Per our routine, we booked a tour guide to show us around the island, but we also had plenty of time to explore on our own. There are magnificent shops throughout the streets that offered jewelry, hats, sunglasses, trinkets, replicas of old coins and such. We found amazing one-of-a-kind jewelry fit for Rodeo Drive at Misento Jewelry Workshop, ate a delicious lunch at Mourayio on the waterfront (more octopus for me and chocolate ice cream for us both), and enjoyed wandering through the streets along the ocean and up to the windmills to view another miraculous sunset.  Some of my most beautiful pictures are just of winding cobblestone streets between tall white buildings with blue shutters.

The windmills of Mykonos; Photo by Nicole McClinton; courtesy of ETG

Before this comes to an end, it’s worth mentioning that at every location, stray dogs and cats have free healthcare and are much kinder than the animals you know, because they know where they can go for a free meal as well.  We were often accosted by the random dog or cat, which would always make friends, follow us for a bit, or lay by the wayside enjoying the sun, then saunter off leisurely and happily.

After another full day, we returned (via SeaJet) to Athens and prepared for our trek home. Who knew that this would have been a trip of a lifetime?  We’ll have to return in the next few years. Thank you Greece! I’m a fan and I’m spreading the word – GREECE IS THE WORD! 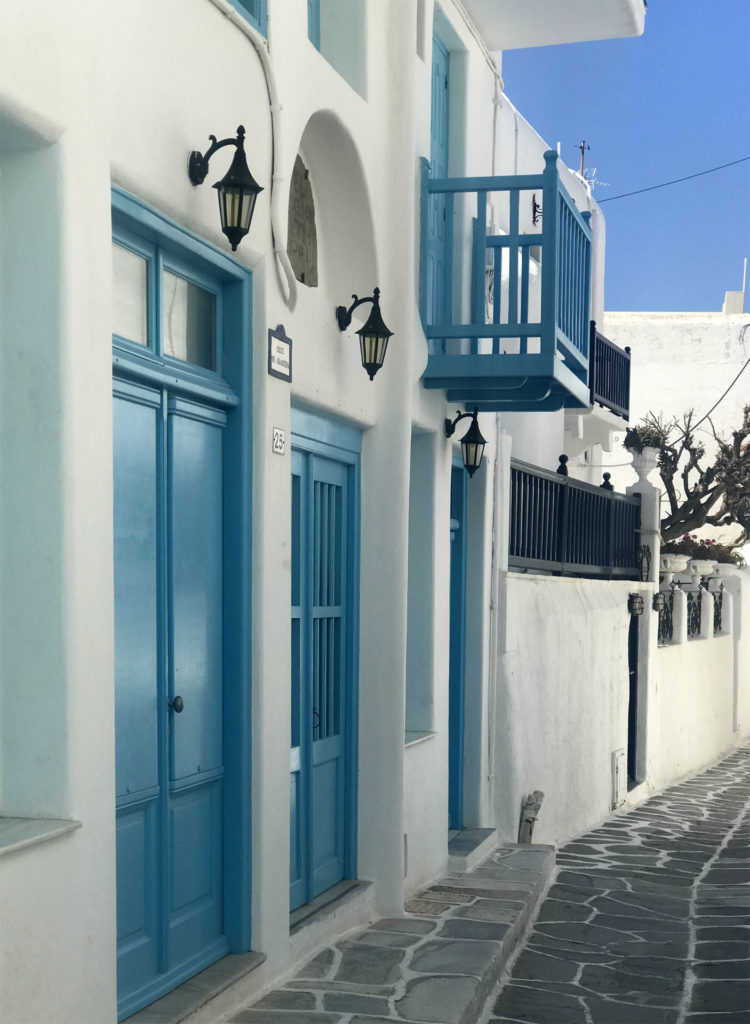 The cobble stone streets of Mykonos; Photo by Nicole McClinton; courtesy of ETG