My photographer and I were invited to review El Granjero Cantina LA, a relatively new restaurant which was opened in June 2021 by owner John Moshay. Located at the Original Farmers Market, this turned out to be a fun day out. I have not been to this market in quite some time, and I was truly impressed by all of the upgrades, new vendors, and eclectic shops.

As we approached the restaurant, my mood perked up as soon as I saw the cheery colors and beautiful outdoor patio. We were greeted by general manager Grace Etchegoyen who arranged for chips and salsa to arrive at our table as soon as we sat down. 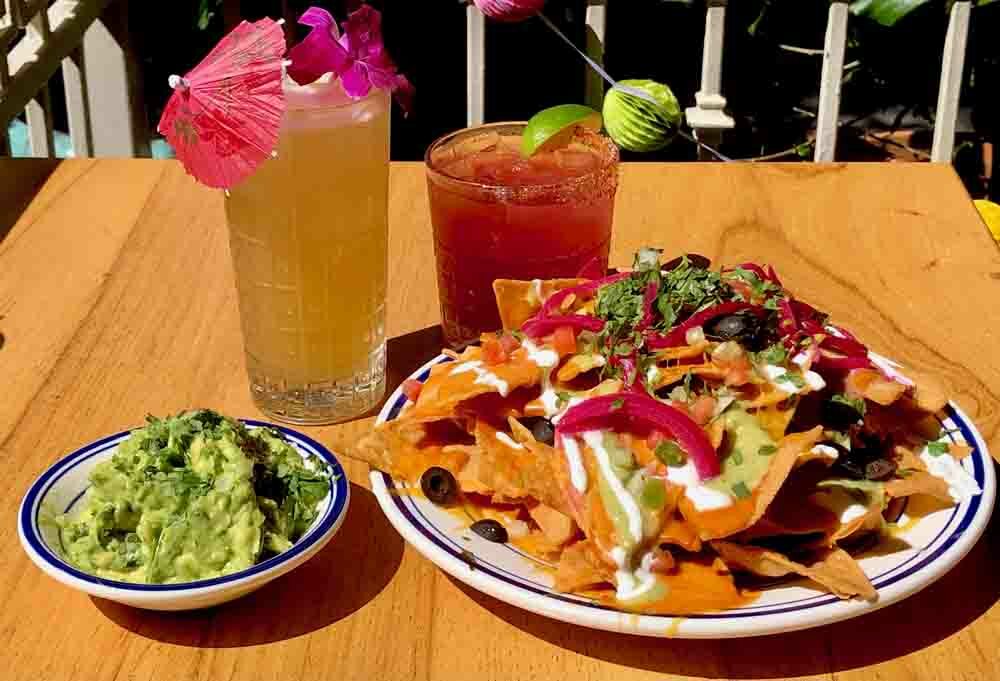 Cocktails, with Fiesta Nachos, and guacamole; Photo by Richard Bilow; Courtesy of ETG

Keeping up with the festive vibe, we ordered a Pomegranate Margarita, (tequila, grand mariner, grapefruit, pomegranate, lime), and a Mai Tai with a Mexican twist, featuring Añejo tequila along with the classic Mai Tai ingredients (aged rum, lime passion fruit, cinnamon). Both were delicious and refreshing.

Etchegoyen suggested that we kick start our Mexican feast with the happy hour size Fiesta Nachos (guajillo cheese sauce, black olives, pickled onions, salsa Verde, pico de gallo, sour cream). It was unexpectedly large…I can only imagine the size of the regular menu nachos, which would be great for a group to share. The nachos were so tasty, along with the salsa negra (roasted tomatoes and chilis), which was dark in color and rich in flavor, while the guacamole (smashed avocado, scallion, cilantro, lime) was so fresh and complimented the nachos. It featured all green ingredients (scallions instead of onions).

Soon Executive Chef Jenni Sklar (Lucques, Son of a Gun) came out to greet us. She went over the menu, pointed out some specials and offered her recommendations. 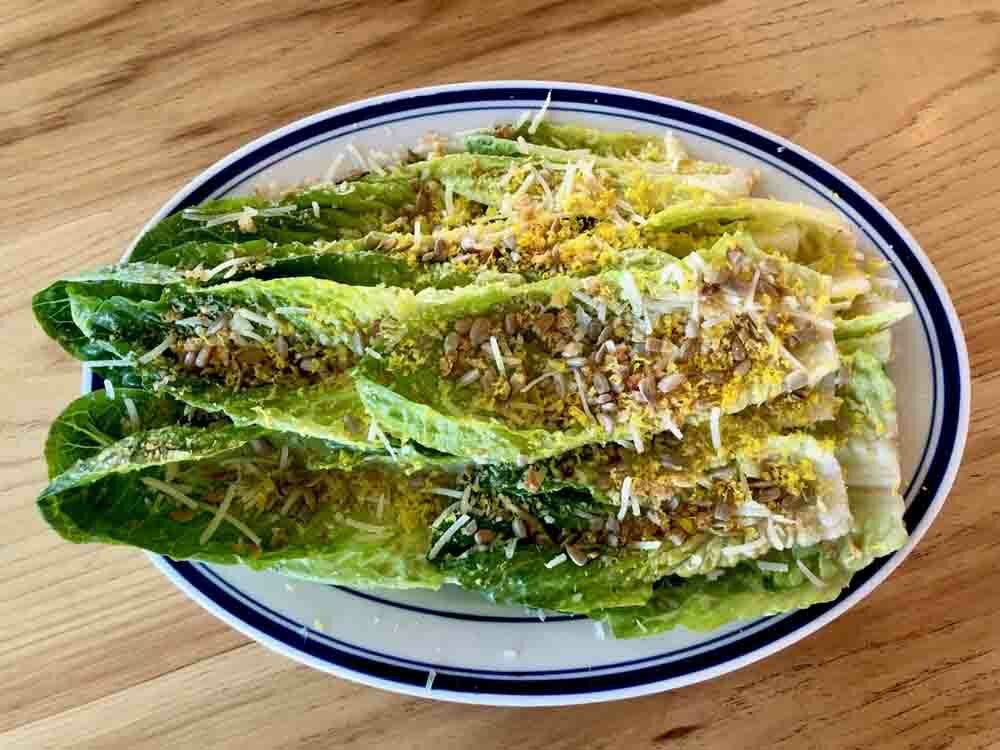 When ordering a Caesar salad, you usually know what to expect. However, our eyes popped when we saw large leaf romaine lettuce, adorned with cheese, cured egg yolk, sunflower seeds, and breadcrumbs – the mixture was sensational. This was one of the best Caesar salads I have ever tasted.

The Quesa-taco jolted our taste buds. The braised beef (slow-cooked birria-style) was so tender, it melted in your mouth. The combination of the beef, crispy taco shell and three cheeses, blended into a perfect beefy quesadilla/taco. It came with a scrumptious sauce made from the beef stock along with grilled jalapeño and chili sauce – these were undeniably delicious.

From Left to Right: Queso-Tacos, and Lobster Tacos; Photo by Richard Bilow; Courtesy of ETG

Next we enjoyed spicy Lobster Tacos (battered Maine lobster tail with a tangy coleslaw, manzanno aioli, pickled red onions). This dish was featured on the specials menu and was absolutely magnificent. The crunchy batter gave way to a tender succulent lobster. The tang from the coleslaw mingled gently with the red onions and elevated the flavor. 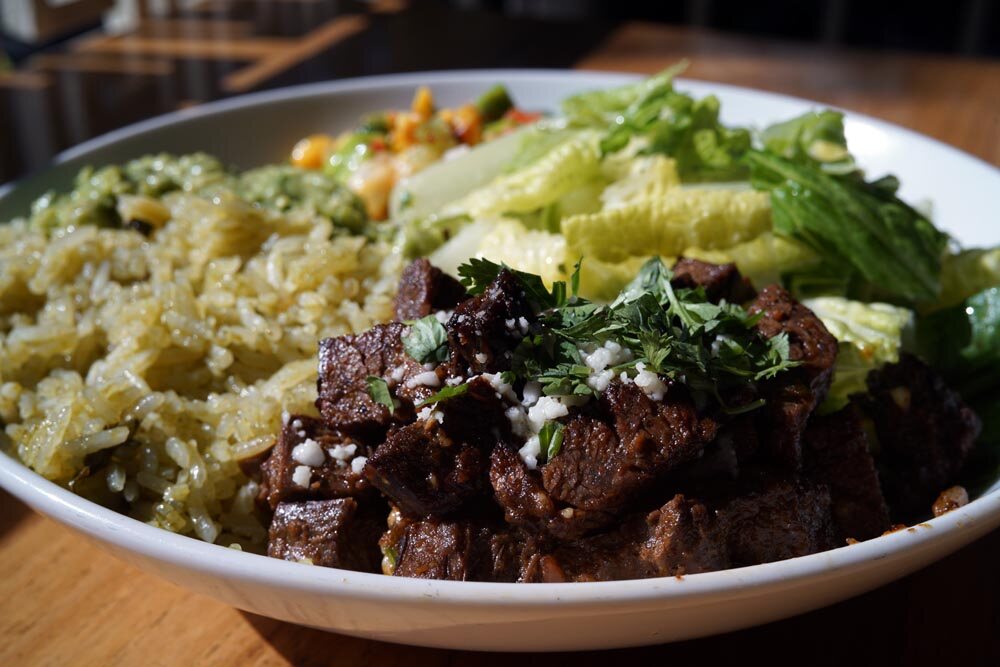 We were excited to try the Los Tazones. We opted for the Steak Taco Bowl, which was also listed on the specials menu. This multidimensional dish featured a little bit of everything…Asada style skirt steak, guacamole, corn salsa with tasty cactus bits, cotija cheese, and cilantro, along with salad and rice. I loved the confluence of ingredients. The steak was super tender, and the fresh corn salad gave the dish a pleasant pop. 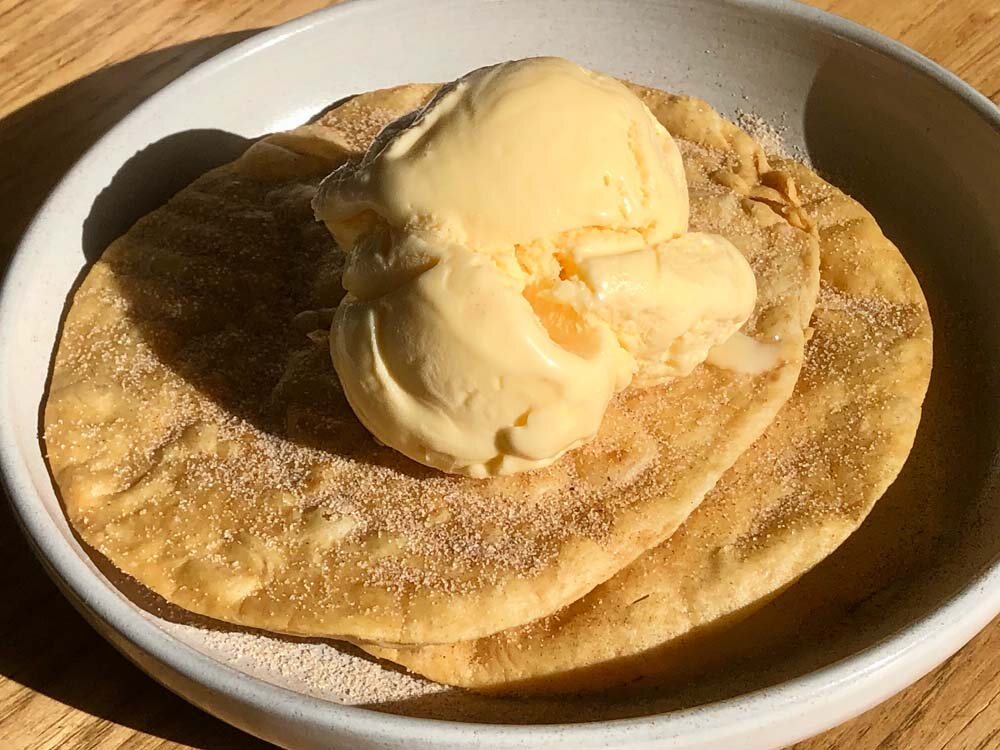 Finally, a subtle yet tasty Bunelo Sundae arrived. It was a delicate marriage of sugary crispy wafer with creamy sweet ice cream.

Cheer up your day by enjoying a patio seat at El Granjero Cantina. It’s a great place to people watch, while enjoying a margarita. The restaurant also offers beautiful inside dining, with a colorful contemporary bar and lots of fresh air due to the adjoining patio. Be sure to check out the Specials menu, along with the Happy Hour menu. Keeping up with today’s dining demands, specific items on the menu are tagged with initials GF or V, for those who choose to eat gluten free or vegan. El Granjero Cantina at the Original Farmers Market, 6333 West 3rd Street, Los Angeles, CA 90036; https://www.cantinala.com 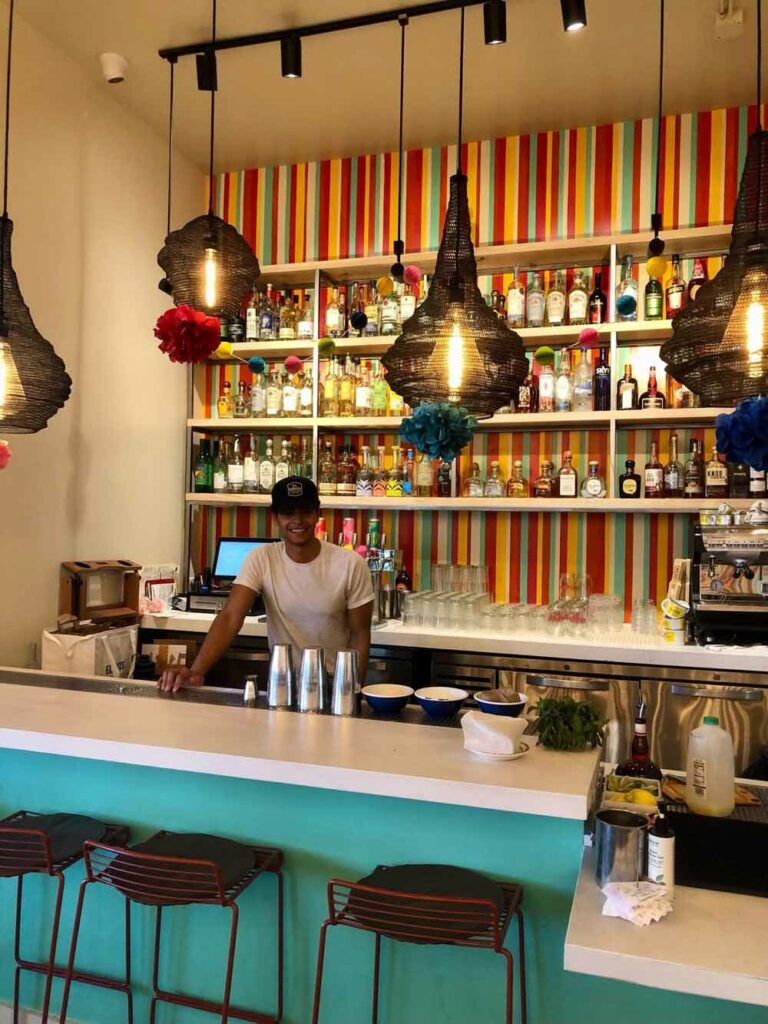