Burning Man has a mythical reputation. Each year, people from all over the world gather in Nevada seeking their own profound experiences at this global phenomenon. The extravagant art fest attracts creative types and allows its attendees to let loose from the confines of everyday life. Attendees are said to feel transformed when they return to their daily life. 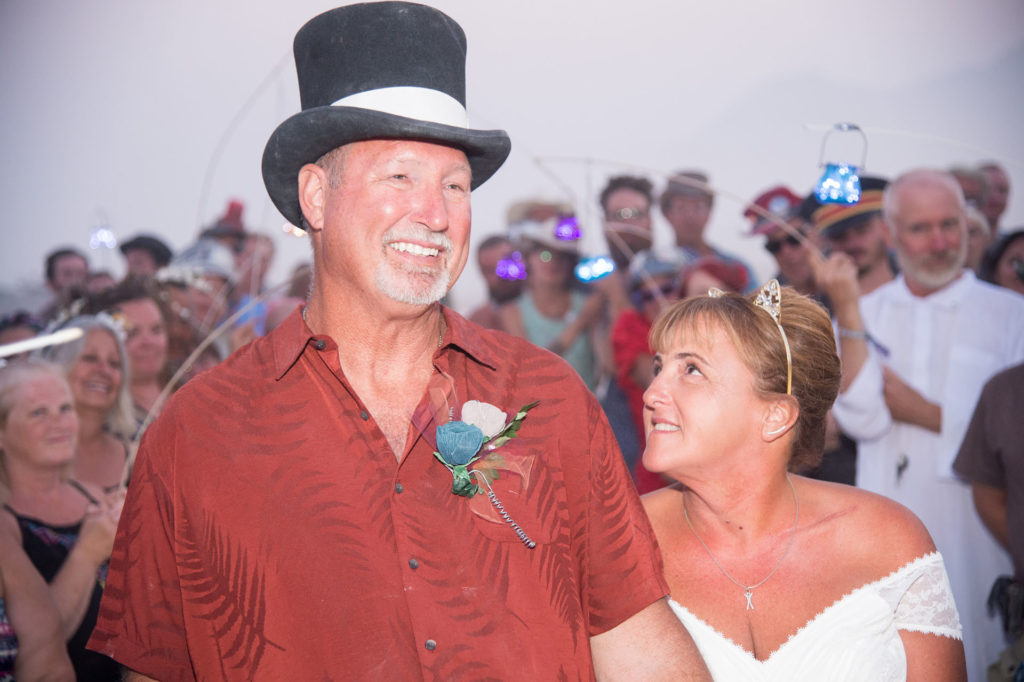 Debra Stiers and Fred Mehr getting married at Burning Man

Longtime “Burner” Deb Stiers has been attending BM since 2002 and revealed that she has experienced life changing moments at the event. In 2017, she married the love of her life at Burning Man which was fitting, since it is where they met in 2015.

Stiers said when people ask about BM, she always tells them to attend a Decompression or some type of Regional Event first. “These smaller events are much more intimate, less scary, and more environmentally friendly! You can get a flavor of what BM is all about – what you might see, hear, experience – perhaps change your perception of what you thought BM was/is.” She also encourages people to be a part of it. ”Bring your art, music, dance…Build something amazing! Give back, volunteer – even if you are a first-timer, we all have something to share with each other.” 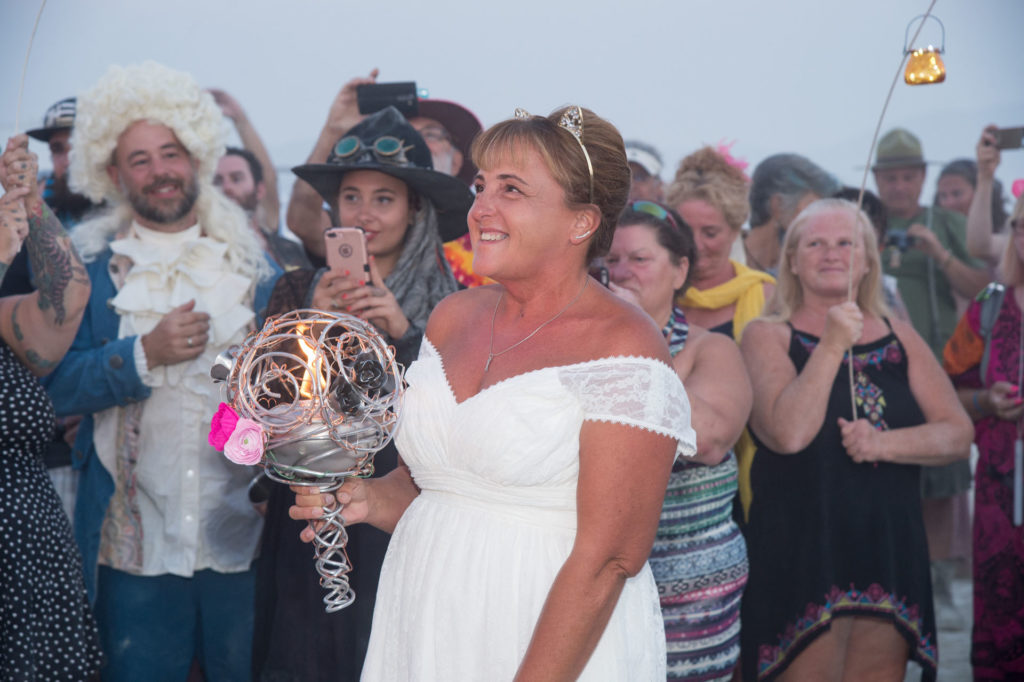 Debra Stiers on her wedding day

Not knowing what to expect at her first burn in 2002, Stiers said she was completely unprepared for the culture of BM. “BM was incredibly liberating my first year. I experienced a freedom and sense of independence that I had never known existed.” BM stresses that attendees give back, be inclusive, and pay it forward, something that Stiers wanted to experience as soon as she entered the city…so she volunteered to become a greeter – which she does to this day. She has become much more involved on every level, with both Burning man and the Decom Arts & Music Festival (in LA), dealing with volunteers (1500 plus), logistics, infrastructure, and ticketing. She is a founding board member of the Los Angeles League of Arts, and helps to put on the annual Los Angeles Decom event.

Perhaps it was kismet that she would meet her soon to be husband (Fred Mehr) at BM’s greeter station in 2015. It was his fourth time attending the event. Fred actually worked as a greeter, but the two had never met. Stiers said there was a strong connection right away…and they ended up merging their BM families. “Fred tells me that as soon as we met, he told himself that I was the woman that he was gonna marry.” 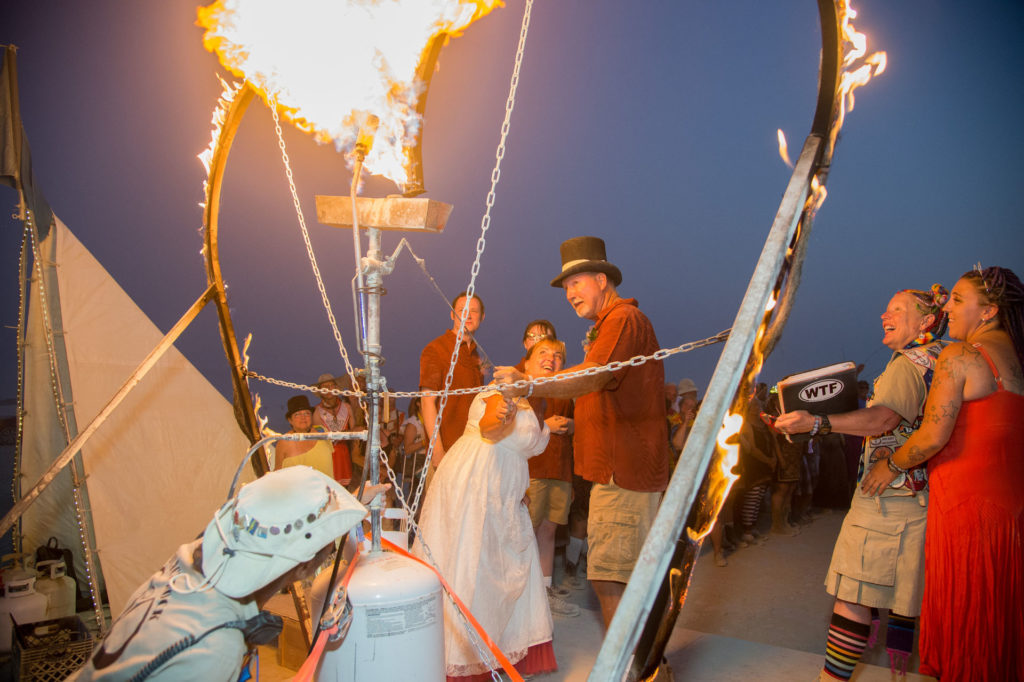 Two years later, they decided to tie the knot at the very event that changed both of their lives. With the help of their friends and family, they chose to have the ceremony at the Greeters Station, and in true BM fashion…it was open to anyone that wanted to attend.

Both her daughters had participated in BM before, but it was a new experience for her husband’s son and daughter. The ceremony included fire, bagpipes, very non-traditional music, with Stiers carrying a fire bouquet. “There was so much laughter, so much joy,” said Stiers. “Both Fred and I wrote our vows… he knew he was in for it when he heard my first vow…‘I promise that I will continue to be ornery!’ Good food, drink and lots of dancing! It was a magical night.” 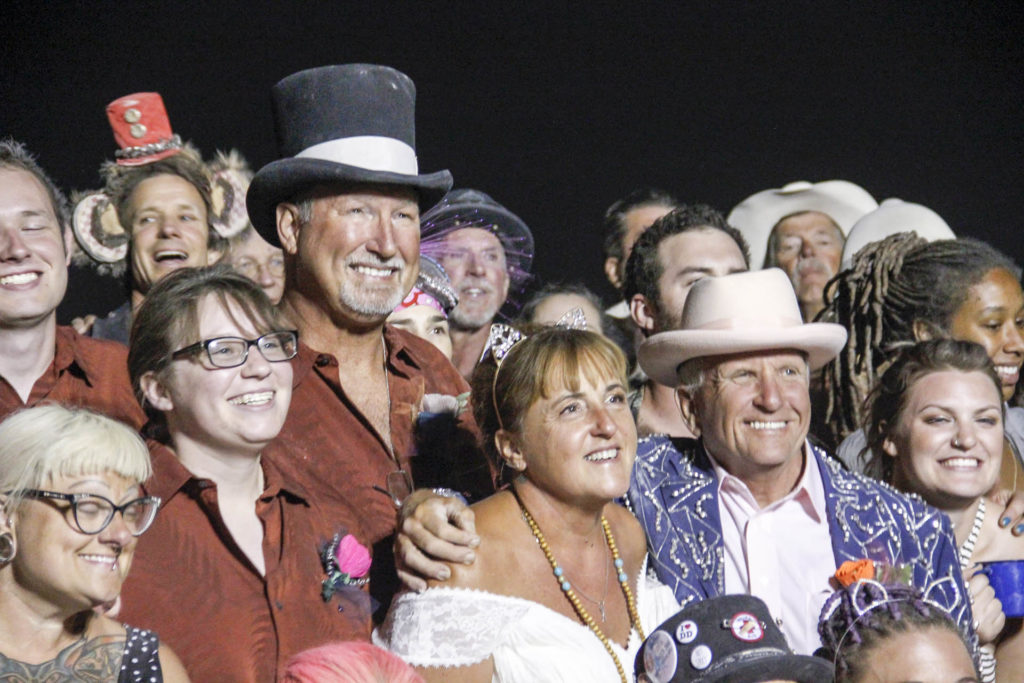 Stiers pointed out that some of her most profound experiences happened at BM… “getting lost my first year and having a random stranger make sure that I made it safely home; leaving the ashes of friends lost in the temple/main base; dealing with the loss of my mother; finding out I had breast cancer, and surviving it; burning my first art piece; falling in love, and finally marrying him.”

Find out more about Burning Man on the website. If you would rather attend an event in your city, decom events take place after the big event. These decompression events happen in cities around the country. I’ve attended the LA Decom and it offers a  taste of the real thing…it’s fantastic. http://www.ladecom.com; https://burningman.org/