I have always been an avid traveler. Life started off that way with my parents packing me up as a 1-year old to visit Paris with my sister Jill. I may have been just as happy pointing at a puddle of water in New Jersey as I was at the L’arc de Triumph, but it built in me a sense of adventure that to this day has been the joy of my existence.

Since Paris, I have had many other adventurous experiences traveling. I camped in a cave for three months in the British Virgin Islands, ran with the bulls in Pamplona, muddied and mineralized in Iceland’s Blue Lagoon. I was never without my camera, photographing and cataloguing my experiences. 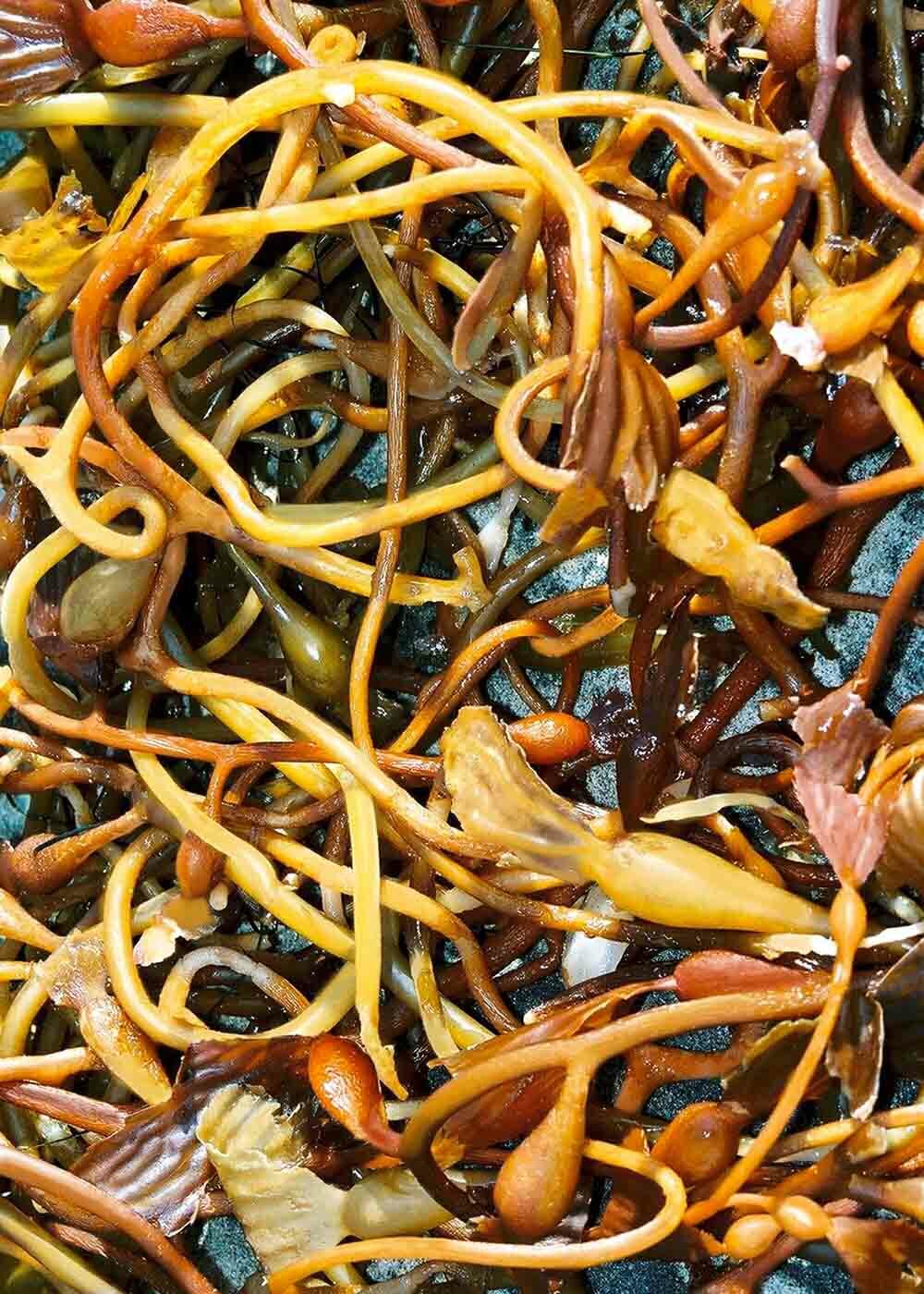 My excitement in choosing new travel destinations derives not only from my sense of adventure but from an uncommon interest in photographing oft-overlooked parts of nature and architecture at unusual angles. From there I create photographically based works of art that for 22 years have been the foundation of my career as an artist. I’ve always been creative but the idea that led me to my unique style of art began in 1994 with a photo shoot of a detailed, colorful pile of kelp.  See photo above

Years later, in 1999, I tried to come up with an impactful way to make art out of it; make it more dimensional. I tried duplicating and reversing the image, then moving the pictures around. I held the design together with post-its and hung it on my wall. The image had grown into its own entity with intriguing, compelling shapes. Thus began my career creating my “Photomosaics” – using slices of life found in nature which became my signature style. Since that first step creating art from a singular photo, I have been able to combine my passions for adventure, photography, and artistic creation into a full-time profession. 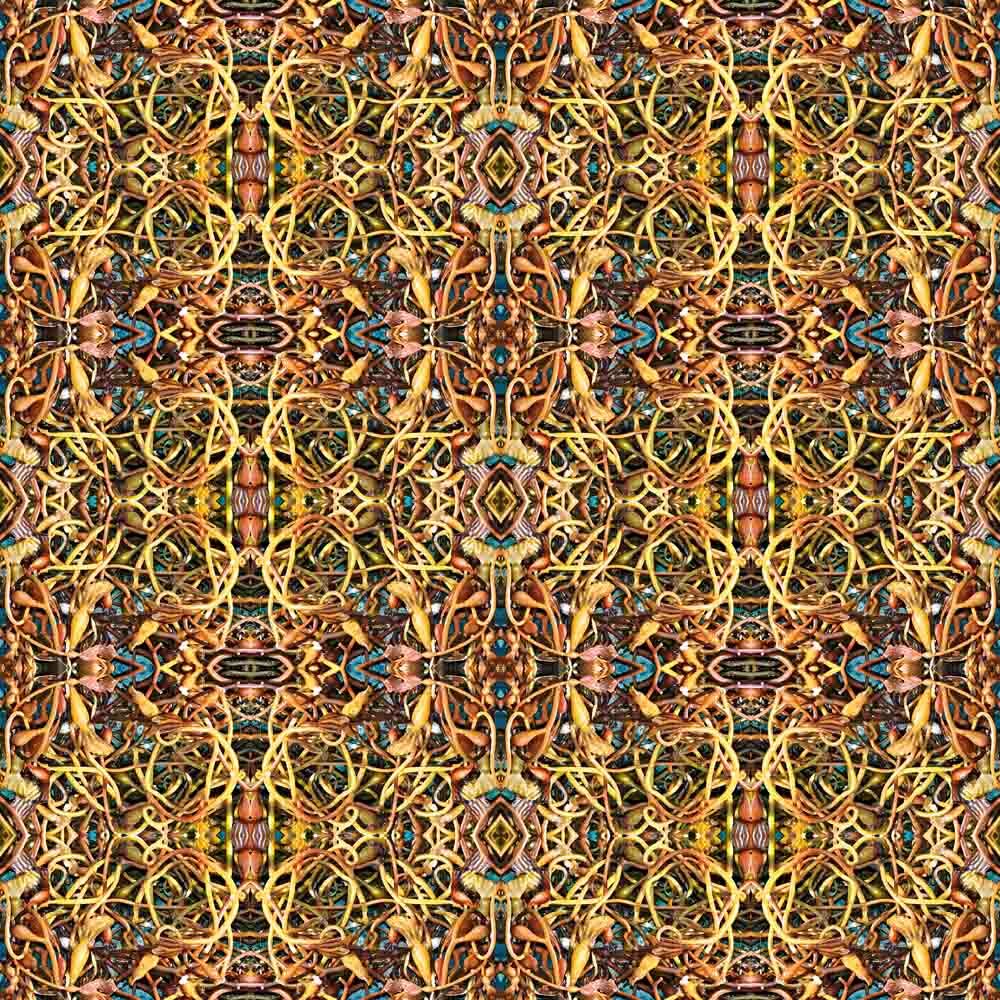 A recent example was my 2019 trip to South America. My sister and I are best friends and in 2016 after her cancer went into remission we decided to celebrate life and sister-hood by taking a trip together every year ‘no matter what,’ which we faithfully did until the pandemic trumped no matter what and became ‘what.’ Just before the Pandemic kicked into high-gear, we had blissfully thrown around a few ideas for our 2019 travel destination and landed on Peru, which appealed for its brilliant colors, magnificent animal life and ancient architecture – and agreed on 12 days. I had “Peru-sed” online and come across an image of brilliant green, moss-covered steps in Machu Picchu, which ascended toward the sky. As I looked at it, I immediately envisioned photographing my own similar image and the finished piece of art I could create, increasing my excitement to visit this magical country. I am always designing what is in front of me, thinking it into an artistic creation. I knew Peru would offer endless opportunities. 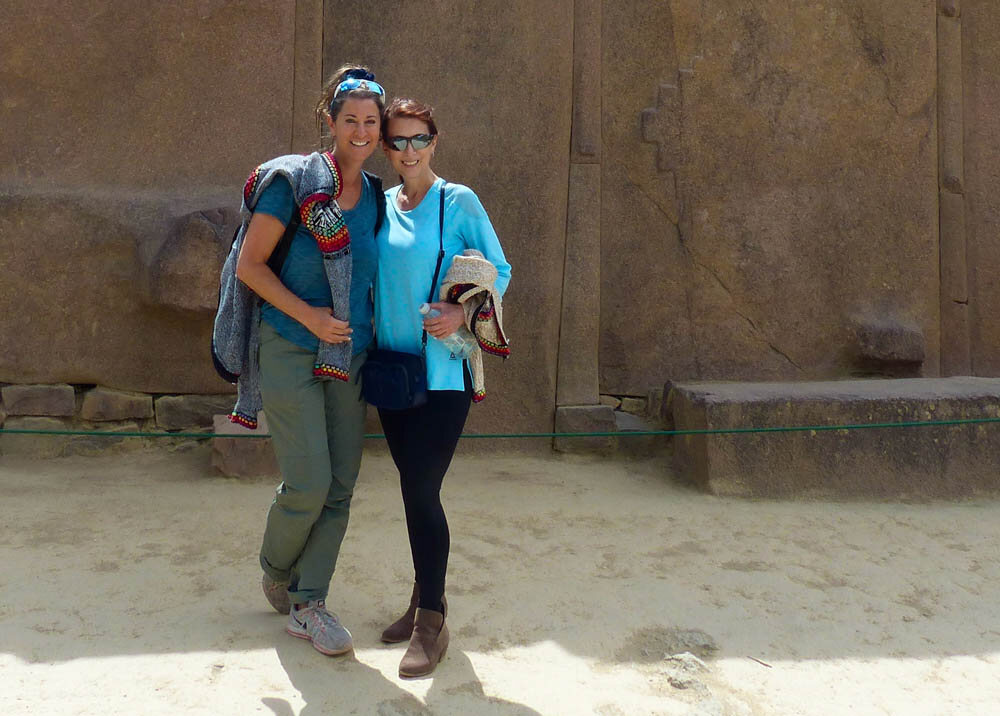 In April we flew to Lima and spent our first two days enjoying the sights and sounds of this ancient city. We happened upon the perfectly preened “Parque del Amor” (Park of Love) and followed a path by the ocean featuring mosaic walls covered with Romantic Spanish writings. After discovering Pisco Sours (our new favorite) at a charming nearby restaurant, we visited the catacombs in the San Francisco convent, a chilling sight with the bones of 70,000 people lined up in artistically arranged rows under a low ceiling-ed monastery. By the time our Fitbits hit 10,000 steps I’d captured many inspiring images. Some I shot knowing they were for my art, some, just for memories.

The next morning we headed to the Amazon. We took an early flight from Lima to Puerto Maldonado and then a bus to the Tambopata River Port. One unsettling moment was finding out the very bus we were bumping down the road on had been hijacked by pirates at gunpoint the night before. Our driver assured us they were ‘probably’ long gone. As we waved goodbye to our happy-go-lucky driver, we settled into a long, narrow boat with three other travelers where Diego, our guide, would take us four hours high-speed down the Amazon River. Lush green jungle surrounded us and my imagination was ablaze with all the opportunity for great photography. At one point Diego slowed our boat to a low grumble so we could appreciate the shy Capybarras on a dirt patch to the left of the river; semi-aquatic, web footed, Labrador-sized, cartoon-like characters considered to be the largest rodents on earth. 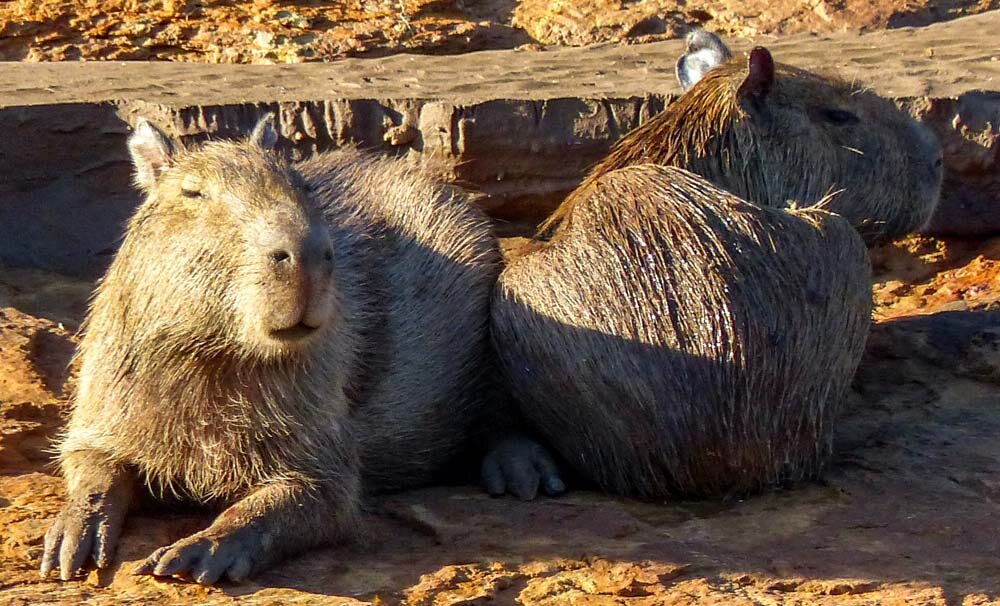 A pair of Capybarras lounging by the river

After many more stops to observe small Caiman crocs, Piranha’s and a possible sighting of a notoriously evasive Jaguar, we finally arrived at The Refugio Amazonas Lodge; our earthy, three-walled hotel nestled in The Tambopata National Reserve. We were educated on the medicinal uses of local plants and then spent the remainder of the day exploring the steamy jungle around us before settling into our rooms. That missing 4th wall would provide incredible photo ops as the hotel was built to be part of the natural environment so bats, Tamarin monkeys and other exotic animals and insects would come near or right into our space. The following day we took in the sight of hundreds of Macaws gathering at a local saltlick before flying off in colorful droves.

Following three days in the rainforest, our driver took us to Cusco, a city near the Urubamba Valley of the Andes Mountains which was known as the capital of the Inca Empire. At 11,152 feet, Cusco is at a much higher elevation than the tippy-top of Machu Picchu – just under 8,000.

At a famous local market, we watched colorfully dressed women weave gorgeous articles of clothing. By the end of our trip, I’d come home with four Alpaca sweaters which I still wear faithfully no matter the season. 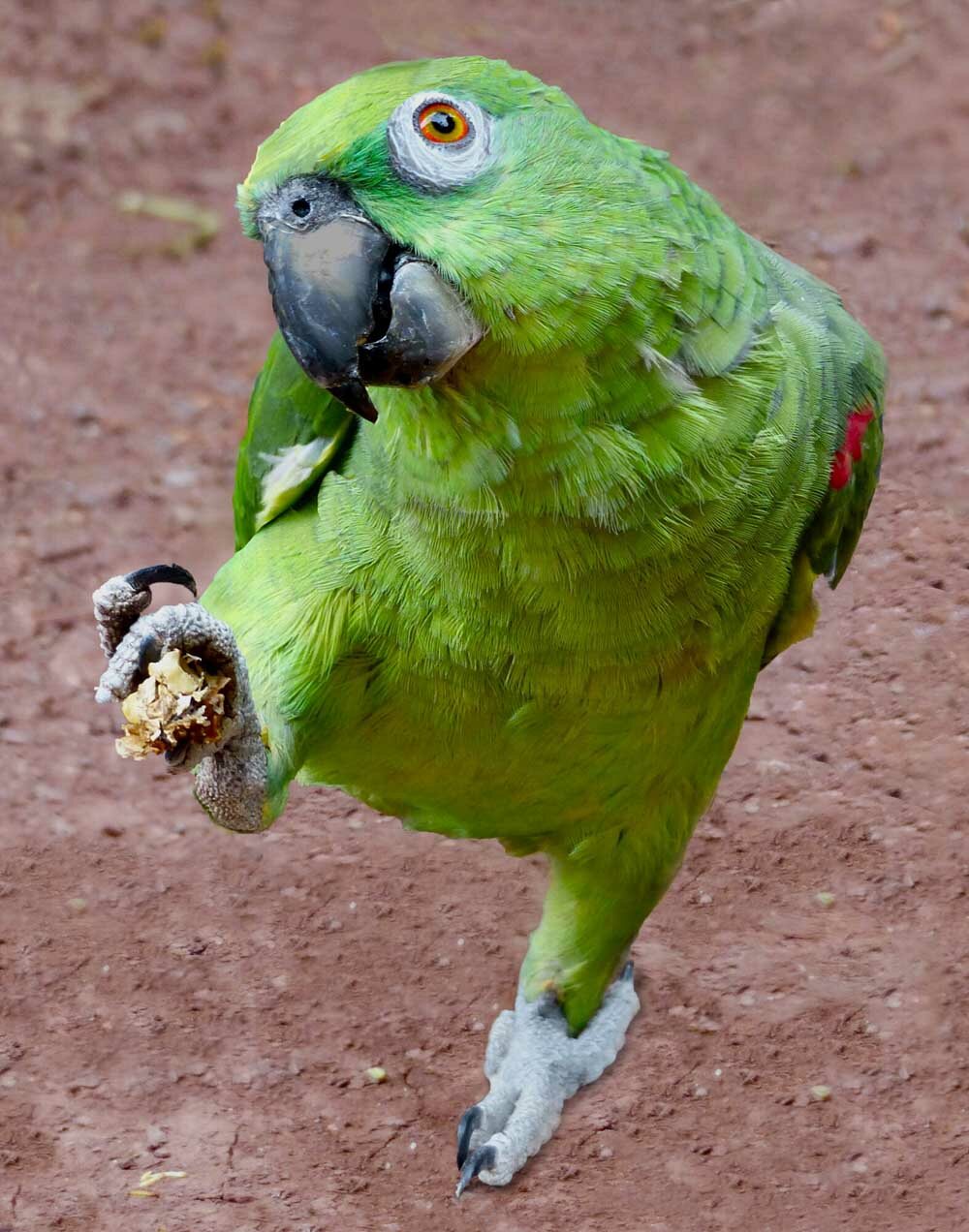 An expressive parrot outside our hotel

We spent the night in Cusco and were taken the next morning to Aranwa Valle Sagrado, our highly recommended hotel in the Sacred Valley. I spent an unexpected hour photographing a group of bewitching Macaws and Parrots lunching on a table before heading to see the top 3 sights of the Sacred Valley. See. photo above

The salt mines in Maras were the first. My impression was that these pastel-colored pools of evaporating salt water looked like a patchwork quilt covering the mountain. I had fun shooting them as I noticed some had already evaporated, leaving the purest Andean salt on earth. In my mind, I’d forecasted the shapes into a pleasing end-product. 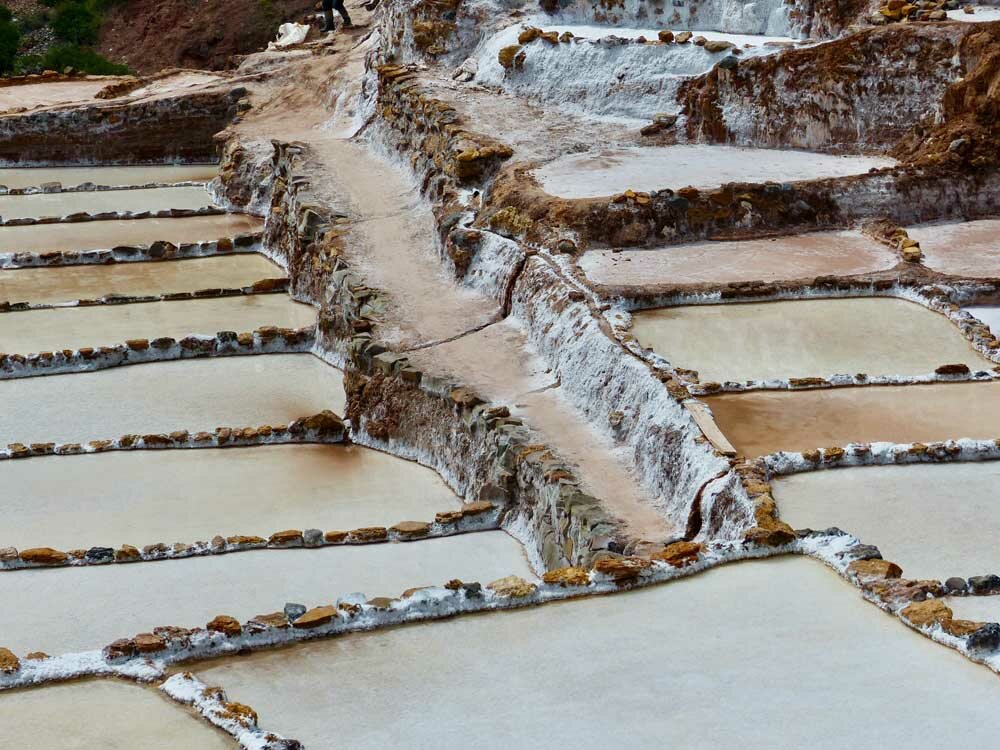 View of the salt mines in Maras

After a meal, we visited Moray. Overlooking the Urubamba Valley and built into natural sinkholes, these enigmatic circular green terraces were presumably built in the 1600’s by brilliant Incans as an agricultural laboratory to determine if planting trees at incrementally higher step elevations made them more resistant. Other theories are that the depressions are alien crop circles left by a heavy-footed UFO. Late in the afternoon we visited Ollantaytambo, an Incan village with walls and towers that protected the Inca Citadel from Spanish invasion before the Incas fled into the jungle.

Early the next day, we excitedly took a train ride from the Sacred Valley to Machu Picchu – also called “the Lost City.” Our train transitioned from Andean green fields to lush rainforest along the Urubamba River. From there we boarded a bus that drove us carefully and slowly up a winding road to the actual site of Machu Picchu. Set between two mountains, this spiritual oasis was astounding. (“Empaths beware; it opens and resonates with ALL the Chakras”- (online source.) We’d decided to do the one-day hike to the top and after climbing rock and dirt steps for several hours, we finally reached an alternate, enviable view from the top of Machu Picchu itself. 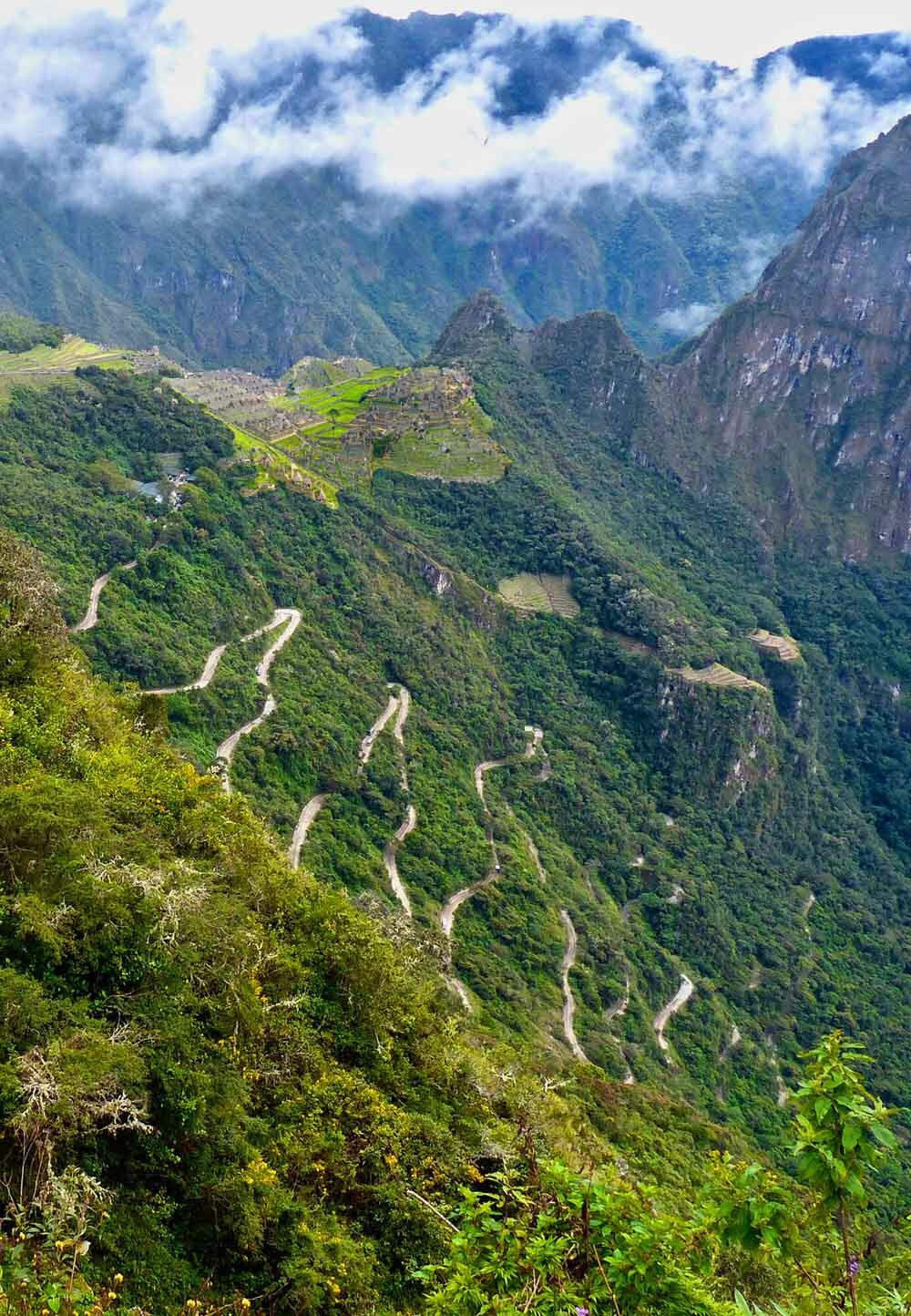 View from the top of Machu Picchu

I knew after shooting the first few photos, at least one image would be used for my art. I almost always know. I evaluate pictures based on a visceral feeling in combination with thoughts of ‘I will do something with that. Crop here, use this other pic as a border…’ An image that best captured the height and magic of this iconic view ended up featured in the main artwork I created upon returning from our trip.

When we finally made it back down the mountain, we had a guided tour around the citadel, experiencing the energy and atmosphere of this 7th great wonder of the world, set high in a cloud forest. The environment was teeming with thousands of bright green mossy steps and I got my shot that would become the backdrop for my Peru artwork. 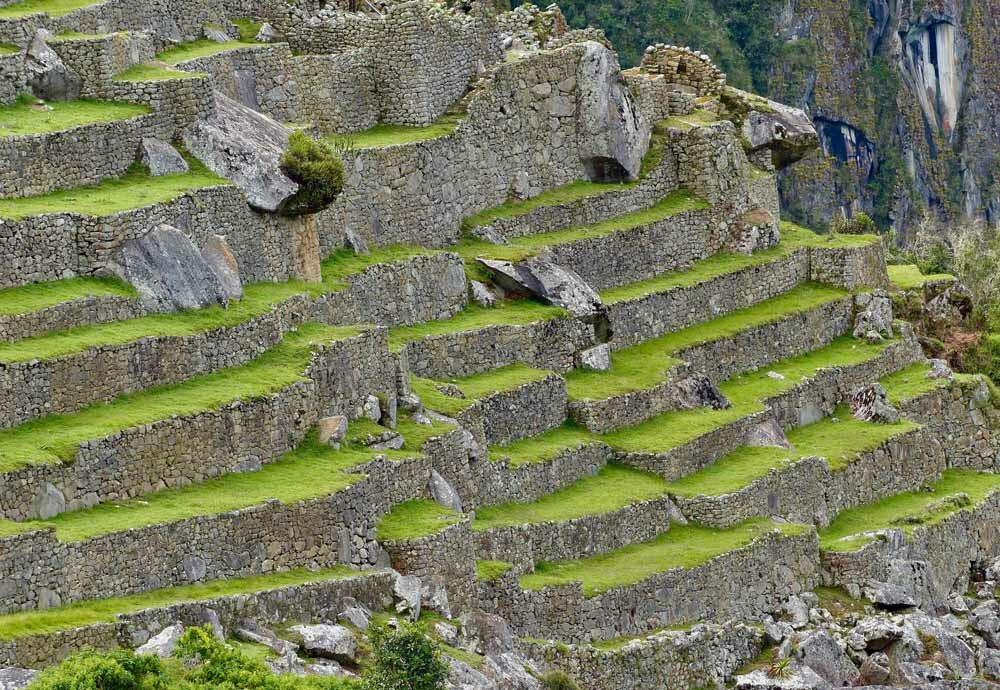 Steps of the Inca Empire in Machu Picchu

We got back to Cusco late at night, crashed, and spent the entire next day visiting fortresses and cathedrals before flying back from Cusco to Lima.

Once home, I spent hours looking over all the amazing photographs and then carefully selected images from each location we visited. Beginning with my favorite image of the bright green steps in Machu Picchu, I began creating my traditional stylized Photomosaic. I then had the idea to add more memorable images including the Macaws, monkeys and four Alpacas that I was obsessed with throughout the trip. This arc of wildlife needed a solid place to commune so I brought in the doorway and steps of the main Church of Cusco. In my dreamlike vision, I imagined the view from the top of Machu Picchu as the focal point and removed the church doors to include my favorite photo of this breathtaking scene. When it felt done, I had composited all my favorite trip images artistically into one printable image and named it “L’arc de Peru.” Mounting it to a large wood frame, I continued the image around the edges and finished it with a glossy resin. Whenever I look at it, it acts as a photo album of our trip and I enjoy all of the experiences all over again. 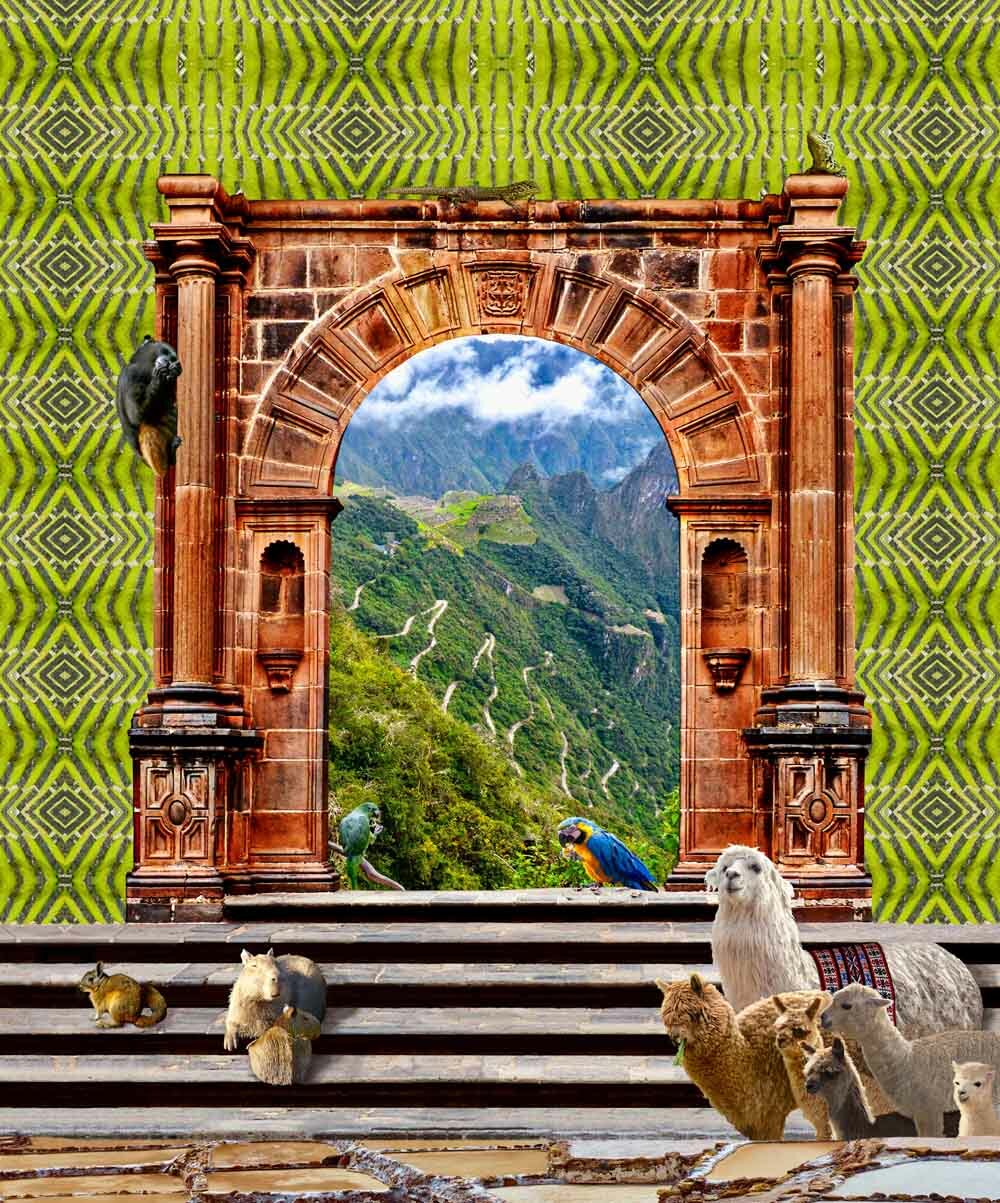 Overall the hotels, guides, locals (and OMG the food and Peruvian cacao chocolate!) were incredible and I am so grateful to have gotten this trip in before all the craziness of the pandemic as it turned out to be the most photo-rich experience I’ve ever had.

Since Peru I have invested in more lenses and expanded my repertoire to include beach and landscape photography – which I often print large on acrylic. 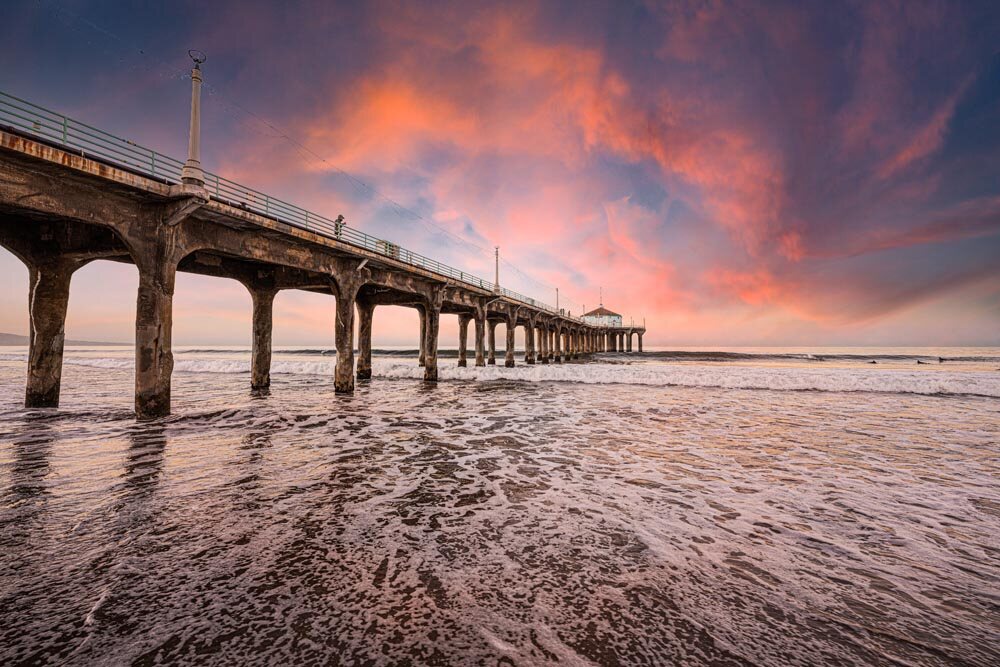 My favorite image from the Manhattan Beach Pier, CA

In July I’ll be adding the ‘Big Five’ to my photo-expeditions as I will be traveling with my sister and faithful companion to Kenya, Africa.

From wherever my art springs, however my art is expressed, I will always have a camera with me.  And probably wearing an Alpaca sweater. https://www.jenhellmanart.com/