Los Angeles based painter Gregg Chadwick has had a lifelong love affair with Japan. His art has been influenced by his travels.

Q: Tell me how your love affair with Japan began?
A: I first started traveling to Japan when I was ten years old. The wondrous mix of verdant beauty and flashing neon grabbed me. Inspired by that initial visit, I read deeply about Japanese culture and visited exhibitions of Japanese art whenever possible. After I finished my Master’s Degree in Fine Art at NYU, I journeyed back to Japan. Deeply inspired by the urban spaces of Osaka, Kyoto, and Tokyo, I painted a series of artworks which were exhibited in a solo show at the Iku Gallery in Osaka, Japan. A few years later, I was again in Japan following the spirit and artworks of Ando Hiroshige. That winter in Tokyo, I clutched a large volume by Henry D. Smith II and Amy G. Poster on Hiroshige’s One Hundred Famous Views of Edo and trekked on rail, foot and car across the historic core of what had been Edo era Tokyo. Sponsored by the Nippon Seiyu-Kai’s 30th Anniversary Award, I endeavored to create a series of new paintings inspired by Hiroshige’s woodcuts. Time, place, memory, mystery, and lore all mixed in my artworks which were exhibited at Space AD 2000 in Tokyo. 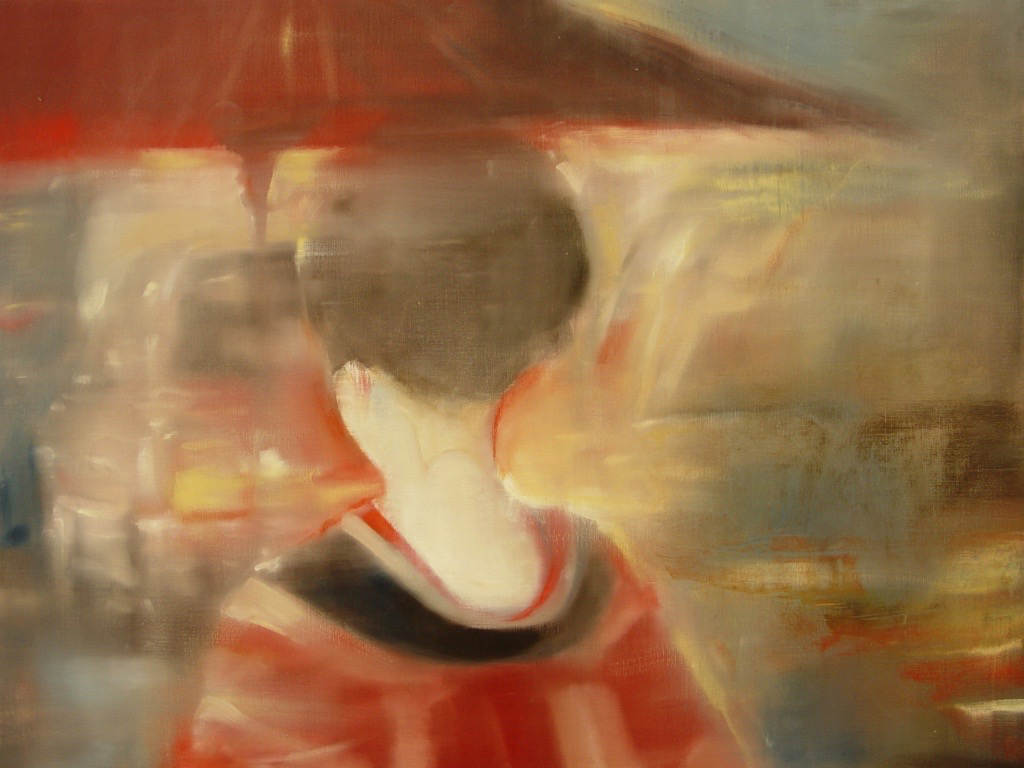 Q: Do you have a favorite city?
A: Tokyo is one of my favorite cities in the world and I am continually drawn back to its energy and creativity.

Q: Have you become friends with any artists?
A: While in Osaka, I met the artist Tadanori Yokoo and his author/artist brother Naruse. Naruse generously let me use his studio while I created paintings for my solo exhibition.

Q: Are you fluent in Japanese?
A: I speak just enough Japanese to get me into funny situations. I once attempted to order a cup of hot coffee by using the Japanese word Hottokōhī. Instead I said Hato kōhī. which translates as pigeon coffee. A good laugh ensued.

Q: What is it specifically that inspires you?
A: Our shared humanity comes to the forefront when I travel and I am often inspired to share stories of the human spirit in my paintings.

Q: What other parts of Japan hold special meaning for you?
A :The town of Kamakura, an hour or so outside of Tokyo, is home to the great statue of Buddha, the Daibutsu, pictured on countless postcards and books on Japan. A few years ago, I finally made my pilgrimage to Kamakura and stood in awe beneath the great statue. A great wave washed away the building housing the Daibutsu in the 15th century. Since that time the statue has been seated in meditation beneath the sun and the stars. After surviving great tsunamis and political upheavals, the Daibutsu provides perspective on humanity’s rush for wealth and power. Beneath the ancient bronze statue, I felt the past in the wind. If we stop and listen, we can hear our long-lost friends speaking to us through words, colors, and forms. 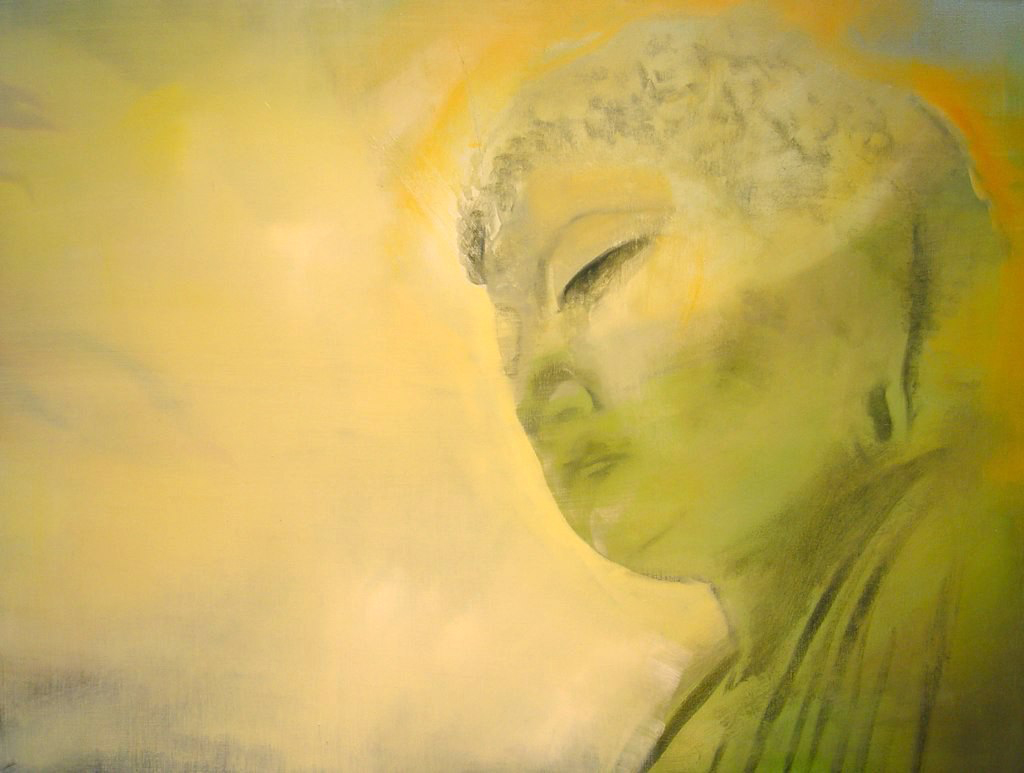 Visiting Hiroshima, the site of the first destruction of a city by an atomic blast, brought forth feelings in me that I did not know existed. Standing by the twisted remains of the Genbaku Dome which was the only building left standing in the epicenter of the bomb’s explosion on August 6, 1945, I remembered artist Lee Mullican, whom I studied with at UCLA. Mullican had been garrisoned in post-World War II Japan as part of the occupying American Army which affected him deeply.

Q: How did that teacher affect your own painting?
A: As the years progressed it has become evident within my own work how Mullican’s deep spirituality and profound humanism provided glimpses of an artistic path to follow. Lee Mullican cherished each living organism. His first-hand knowledge of humanity’s propensity for destruction set him on a path to create artworks that spoke not just of his own personal psychology. Instead, Mullican throughout his career grappled with the problem of creating art that limns our place in a larger universe. After visiting Hiroshima, I also knew that I wanted to deal with the human condition in my paintings.

Q: Can you give me an example of how you utilized the impact he made through one of your paintings?
A: Shadows is a visual poem inspired by my travels to Japan which reflects the tensions of our era. Thin translucent layers of lapis lazuli are brushed across the sky in the painting. Sourced in Afghanistan, this precious stone, when ground into pigment, creates a radiant blue that has been considered auspicious in both east and west. The word depicted in Japanese script in the upper left section of the painting is satori. The word satori is a Japanese Buddhist term for enlightenment or “understanding.” In the Zen Buddhist tradition, satori refers to the experience of kensho. Kensho when used in Zen traditions refers to “seeing into one’s true nature.” Ken means “seeing,” sho means “nature” or “essence.” Satori and kensho are commonly translated as enlightenment, a word that is also used to translate bodhi, prajna and buddhahood. 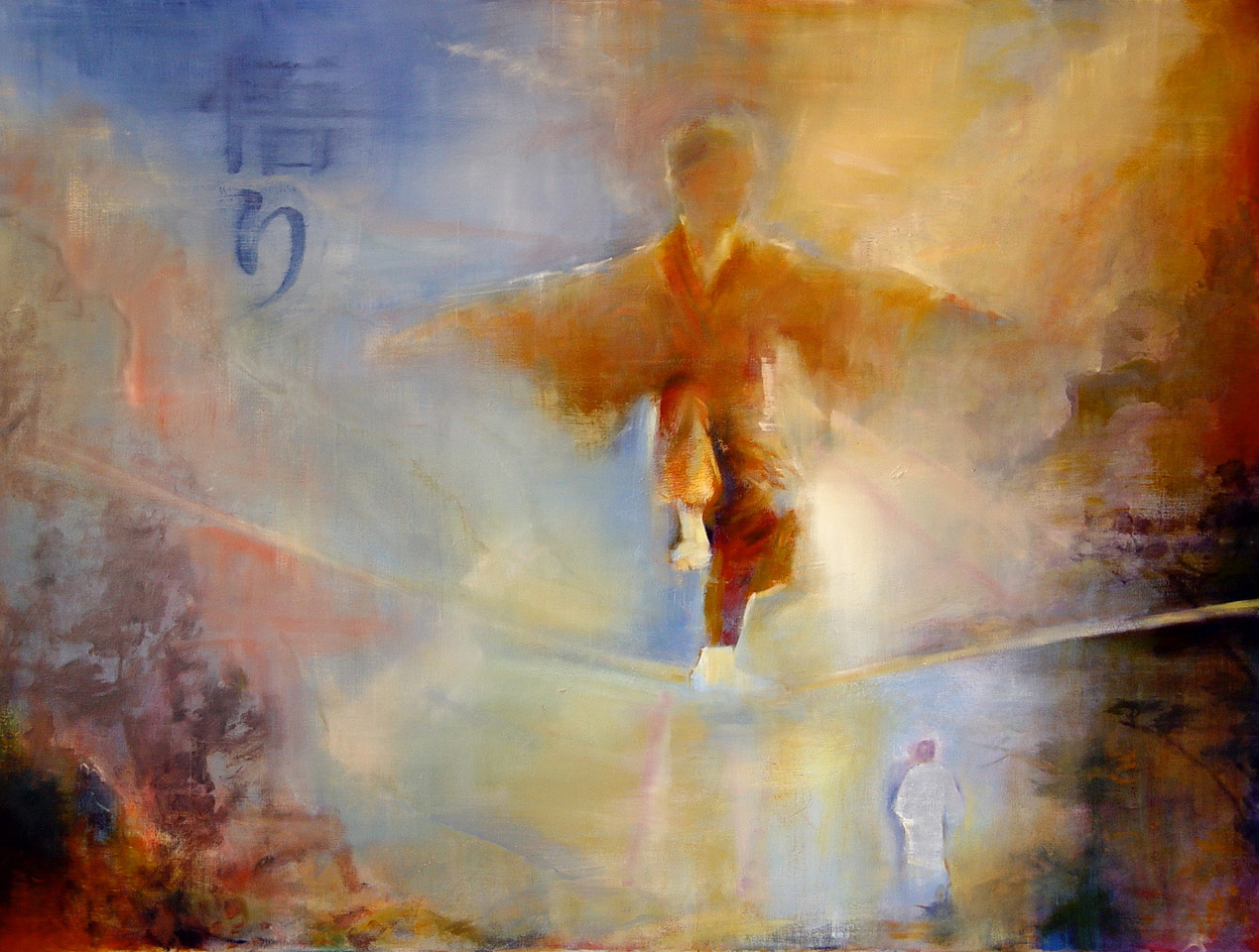 A series of interactions between this painting and viewers worldwide has taken place on the web. Poets, writers and artists from Brazil, to Hong Kong, to Greece, to the Netherlands have interacted with the painting in online dialogues. I have traveled widely in my quest to understand the international connections between east and west. These global interactions inflect my understanding of the painting and help me understand my need to create this work.

To find out more about Gregg Chadwick and his art, visit his website – htttps://www.greggchadwick.com