Culina has been a respected restaurant located at the legendary Four Seasons Hotel in Beverly Hills for nearly a decade (replacing its previous restaurant – Gardens). Two years ago it was redesigned to include new bar/lounge area name Vinoteca. 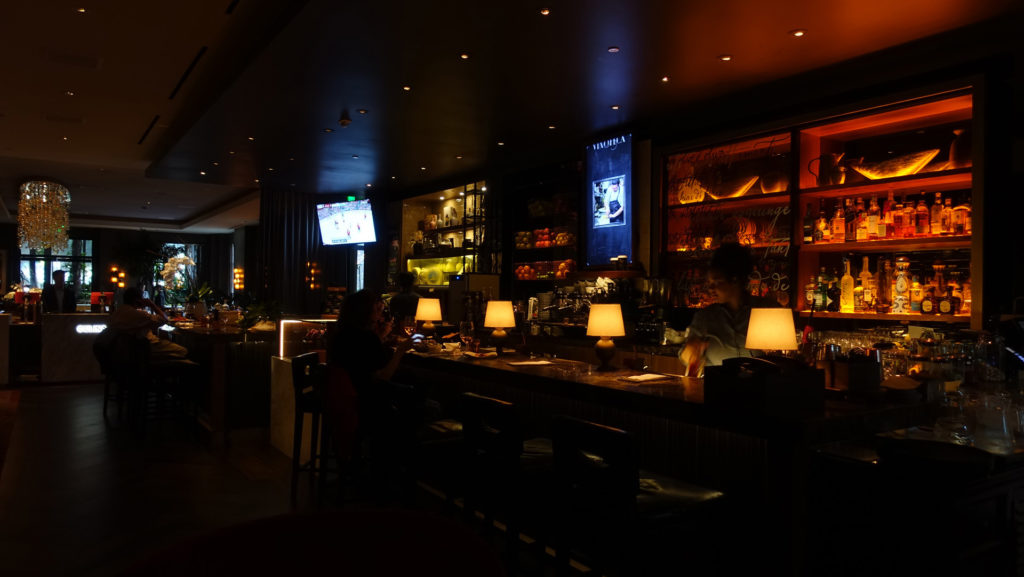 Vinoteca at Culina; Photo by Richard Bilow; courtesy of ETG

I was excited to meet Chef de Cuisine Luca Moriconi and sample the cuisine from his new menu at Culina & Vinoteca. Moriconi has worked around the world and has been revamping Culina’s menu for the past year and a half. Born in Lucca, Moriconi brings his Italian heritage to the table with his own unparalleled spin on modern Tuscan cuisine. I had the opportunity to interview him…Click Here to read the full interview.

As soon as my dining companion and I were seated, the sommelier (David Gary) came by to offer us a glass of Ferghettina Franciacorta Brut. It was crisp with a hint of chamomile…a perfect start to our meal. Our server Sonya Humes was quite knowledgeable about the menu and was well-prepared to suggest excellent wine pairings. 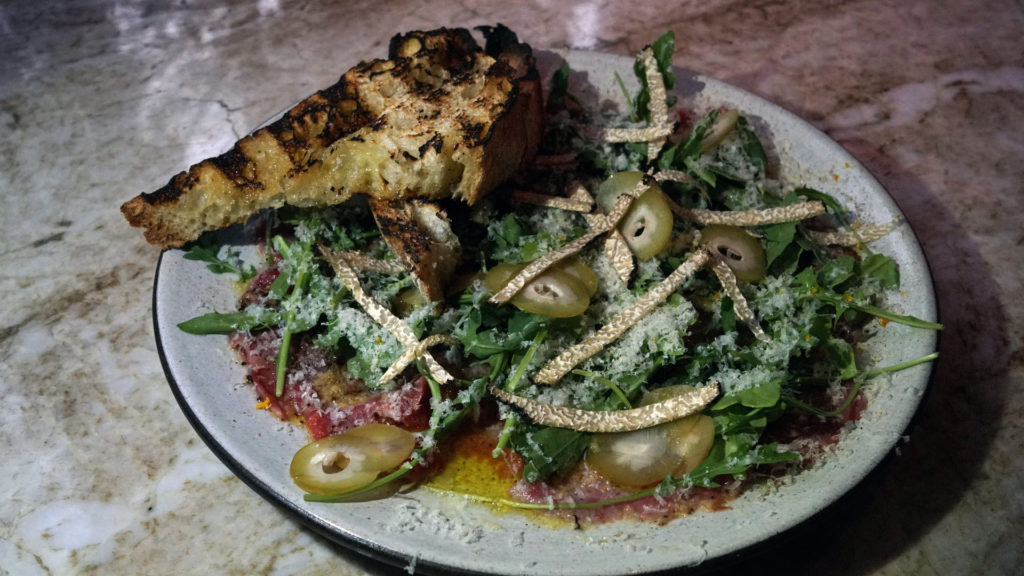 We started our dining experience with the Carpaccio E Peschiole (beef tenderloin, parmigiano reggiano, arugula, truffled dwarf peaches, giachi evoo, ciabatta). The tender beef was smothered with arugula and drizzled with giachi evoo. Truffle slivers were generously scattered across the greens. The thinly sliced dwarf peaches added a delicious and unexpected bite to the dish.

Soon our next two selections arrived. We were served a delicious full-bodied 2016 Vorberg Pinot Bianco Riserva with this course. It paired perfectly with the beautifully plated Sformatino Di Bietole (Swiss chard flan, pecorini Toscano fondue, seasonal black truffle, quail egg). The flan-shaped swiss chard stood like a monument in a sea of velvety fondue adorned with a quail egg topped with truffle slices. I poked the yolk with my fork to let it trickle down the swiss chard structure. The combination of all these savory flavors was exquisite.

The Polpo Grigliato (charred octopus, smoked potatoes and cauliflower purée, green beans, watercress, frisée) was also fantastic. Fresh greens surrounded the tender charred octopus. I am not a fan of octopus, but this was exceptional. I also loved the smoked potatoes and cauliflower purée which was so creamy…almost like a burrata.

Our fine dining venture continued to evolve as Chef Moriconi arrived at our table to serve us his signature masterpiece. He brought a large round wheel of piave vecchio cheese filled with a mound of luscious green risotto. It was beautifully presented, as he stirred the hot risotto which melted the creamy surrounding cheese until they united as one. Then he carefully placed a dollop of villa manodori balsamic vinegar onto a plate and placed the cheesy risotto on top. For risotto lovers, this dish is a well-known attraction which justifies a special trip to the restaurant.

I have met a lot of culinary artists over the years. Chef Luca Moriconi is unassuming and humble, despite his talent. He was quietly joyous as he explained, “The menu reflects my life…the recipes are from my mom and my traditions.” He revealed that the rice used for the risotto was an organic Riso Cuono Carnaroli from Italy, adding “a great rice from a family owned business.” The piave vecchio was imported from Lattebusche, a producer in Veneto-Italy. The Risotto Agli Asparagi (duo of asparagus, piave vecchio cheese, villa manodori balsamic vinegar) lived up to all the hype and was truly out-of-this world.  It went well with a glass of Falanghina Campania Igp 2017 San Salvatore.

Our server suggested a Bibi Graetz Le Cicale Di Vincigliata Chianti 2013 to pair with our next dish, the Nastri Al Cinghiale (homemade pappardelle, braised wild boar sugo, pecorino). This was a cherished recipe passed down from his mother. The wine was a dutiful companion to this hearty dish offering notes of strawberry and leather. Served al dente, the fresh house-made pappardelle was swaddled in a piquant sauce. The boar was exceptionally tender with a robust flavor. The pungent olives helped create a well-rounded dish full of vigor. 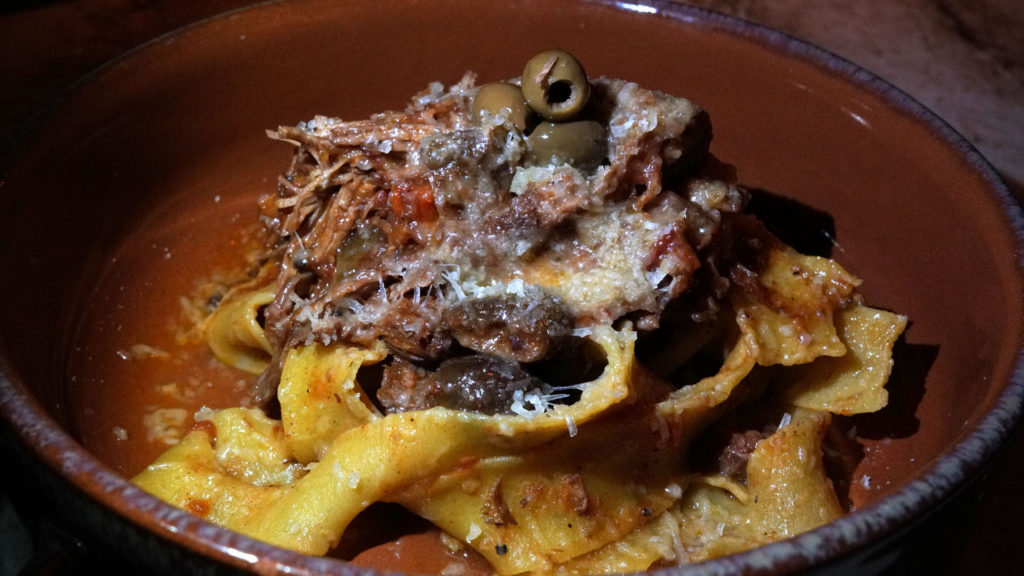 General Manager Allen Artcliff-Cronrod came by to check on us. He explained that Vinoteca was created to accommodate the special breed of patron who live and work in the area. Hollywood producers, writers, executives and celebrities frequently stay for extended periods, conducting business while noshing on their favorite menu items. “I would hear on the news that a major business deal was made and I would think…ah that’s what they were doing.” Vinoteca offers smaller bites in addition to the full menu for those who dine while working.

Our two entrees arrived, along with two more delectable pairings. The Filetto di Spigola (roasted striped bass, sautéed spinach, white asparagus, oregano, fumetto emulsion) was aptly paired with the fragrant Vorberg Pinot Bianco Riserva that we had enjoyed earlier. The fish had a delicate flake inside with a thin crisp outer sear. It sat atop a large swirl of delicate spinach, adorned with white asparagus. 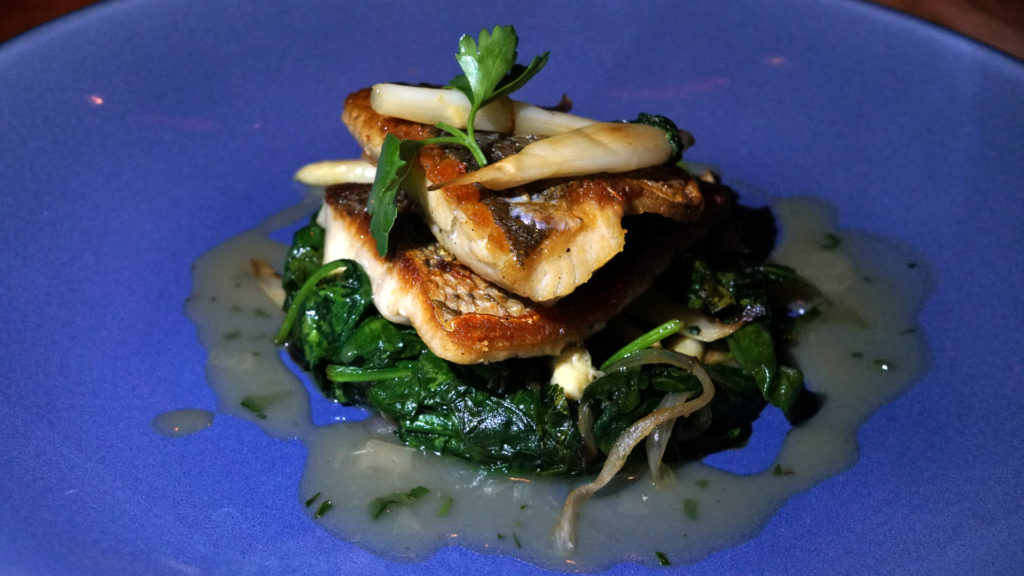 Our second entree, Manzo Ai Ferri (10 oz niman ranch NY strip, red onions, potato purée, tomato, roasted cipollini, green peppercorn vinaigrette) was another work of art. The supple steak lay across a dune of scrumptious potatoes. Roasted tomatoes added both flavor and a pop of color, while delectably-sweet thinly-sliced red onions finished the dish. Once again selecting an excellent choice of wine, our server brought a La Poderina Brunello di Montalcino 2013 to the table, explaining that it was a young, but tannic wine. She commented that this would be a nice balance for the rich taste of the steak. The tannins would cleanse our palate…and she was right. Both wines proved to be consummately matched, allowing our taste buds to truly immerse in the experience and the flavors of the meal. 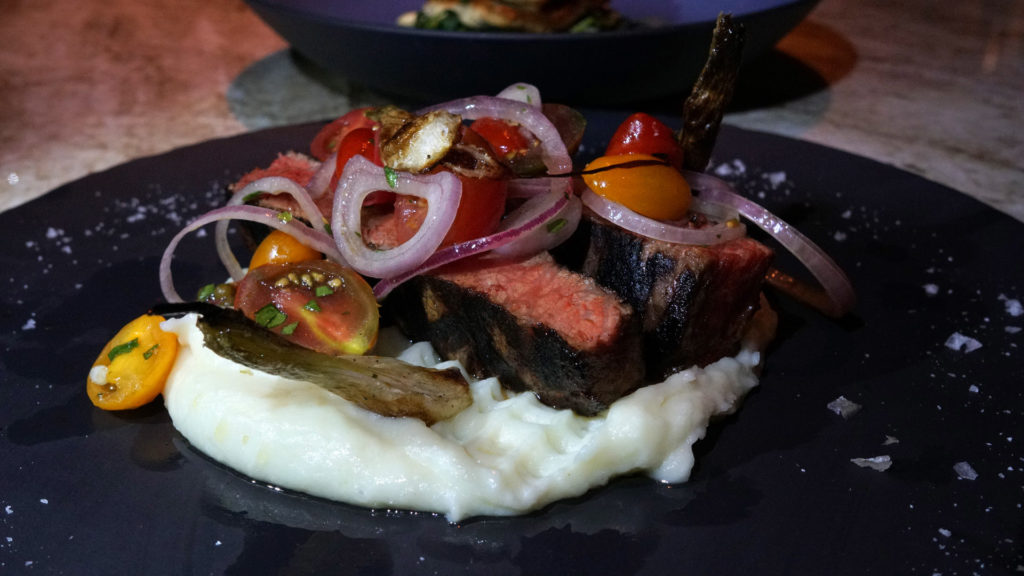 Our tummies were full, but we were not done. Dessert was lingering in the back of our minds…Pastry Chef Federico Fernandez contributes a fantastic assortment of pastries to the dessert menu, and we felt honored to oblige. I negotiated a plan within my own mind, choosing one dessert to share, allowing for a final food and wine pairing. I am normally very selective when choosing a wine for my meal…this time, the staff’s expertise in pairing was a treat which allowed me to enjoy selections made by experts. Our server suggested that we ask the sommelier to choose a dessert wine to pair with the Tiramisu (espresso meringue and chocolate crisp). He introduced a Pala dessert wine from Sardinia. Assoluto Isola dei Nuraghi, IGT offered hints of honeysuckle with a fresh almond finish. 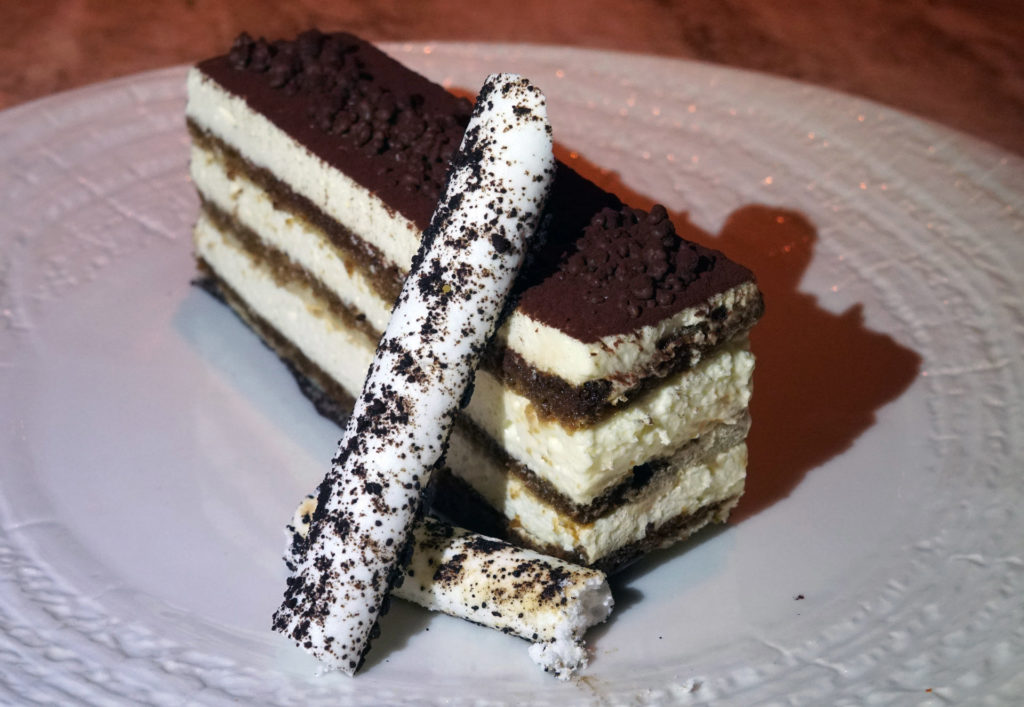