While we have lost so many restaurants this past year, and the current Covid variant is creating new challenges, two bold entrepreneurs have come to the table presenting modern Indian cuisine right in the heart of Culver City. Co-founders and partners Mihir Lad and Executive Chef Sagar Ghosh opened Arth Bar + Kitchen on July 8, 2021. With not just one but two patios for outdoor dining, Arth offers a safe dining experience for those who take public safety seriously. 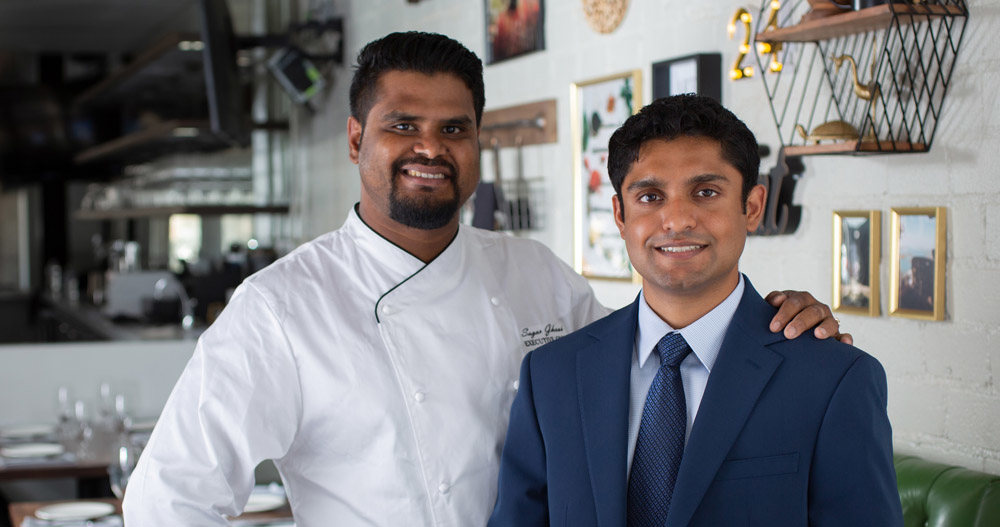 Before having the opportunity to enjoy a full multi-course meal at the new restaurant, I met both partners and Lad’s parents at a media preview. It was clear that Lad’s passion for home-cooked meals inspired him to open this restaurant. An engineer by trade, Lad has always been drawn to the culinary side of hospitality. Teaming up with Chef Ghosh has turned into an exciting venture. The chef attended the Indus Institute of Hospitality and Culinary Arts as well as the Global School of Management. He has worked in kitchens in some of the finest restaurants in Kolkata, Pune, Miami, New York, Buena Park and Tustin. Bringing the freshest ingredients with the magnificent flavors of India and the soul of home-cooked meals to the local community gives Arth a higher purpose, driven by passion. CLICK HERE to find out more about the partners, who were featured in another Culver City restaurant article or go to the Local/Value drop-down on the Eat/Drink Page on ETG’s Destination Section.

When we arrived at the restaurant, we were greeted by General manager Shawn Shetty, who also happened to be a sommelier. We discussed wine, as it is a favorite topic of mine. Most people do not associate alcoholic beverages with Indian food. However, Shetty explained that since Indian food is known for its complex spices, certain wines are particularly well-suited to pair with this food. Some would think a sweet wine would be best, but instead a lighter, crisper easy-to-drink wine truly enhances the flavors. Also, sparkling wines and certain beers are other great options. I chose a Pinot Grigio (Colterenzio, Alto Adige, Italy, 2019), while my dining partner opted for a beer (Little Bo Pils, Smog City, Torrence ). Both paired well with our meals.

Reshmi Kabab, and Angari Murgh from the Tandoor oven; photo by Richard Bilow; courtesy of ETG;

Inside the restaurant, you’ll find an open-air kitchen spotlighting the Tandoor Ovens. We enjoyed two dishes from the Tandoor – Reshmi Kabab (chargrilled chicken in velvety labneh marinade), and Angari Murgh, (chargrilled chicken in yogurt marinade). Both were quite flavorful. Labneh is basically strained yogurt, which removes its whey. This first dish made with Labneh had a savory tang, with a tinge of pepper. The Angari Murgh had a jolt of spice, that was marvelous. Orange in color, due to annatto, I found out later it was the kashmiri chili powder that packed a punch. This also had a yogurt based marinade, but it was completely different than the first dish. This was a favorite for sure.

Next, some Sexy Fries arrived. Topped with a delicious green chutney, tomato gravy, and mayo, the classic french fry has never seen such velutinous love. The Old Monk Drunken Wings (Oriental style rum-infused chicken wings) was another complete departure as to what one would think of as Indian food. The chicken is marinated in Old Monk (an Indian Rum), along with cumin powder, coriander powder, vinegar, salt, chili powder, ginger, and garlic paste. The crunchy, zesty wings were accompanied by a tasty hot buffalo sauce. They were fabulous together. 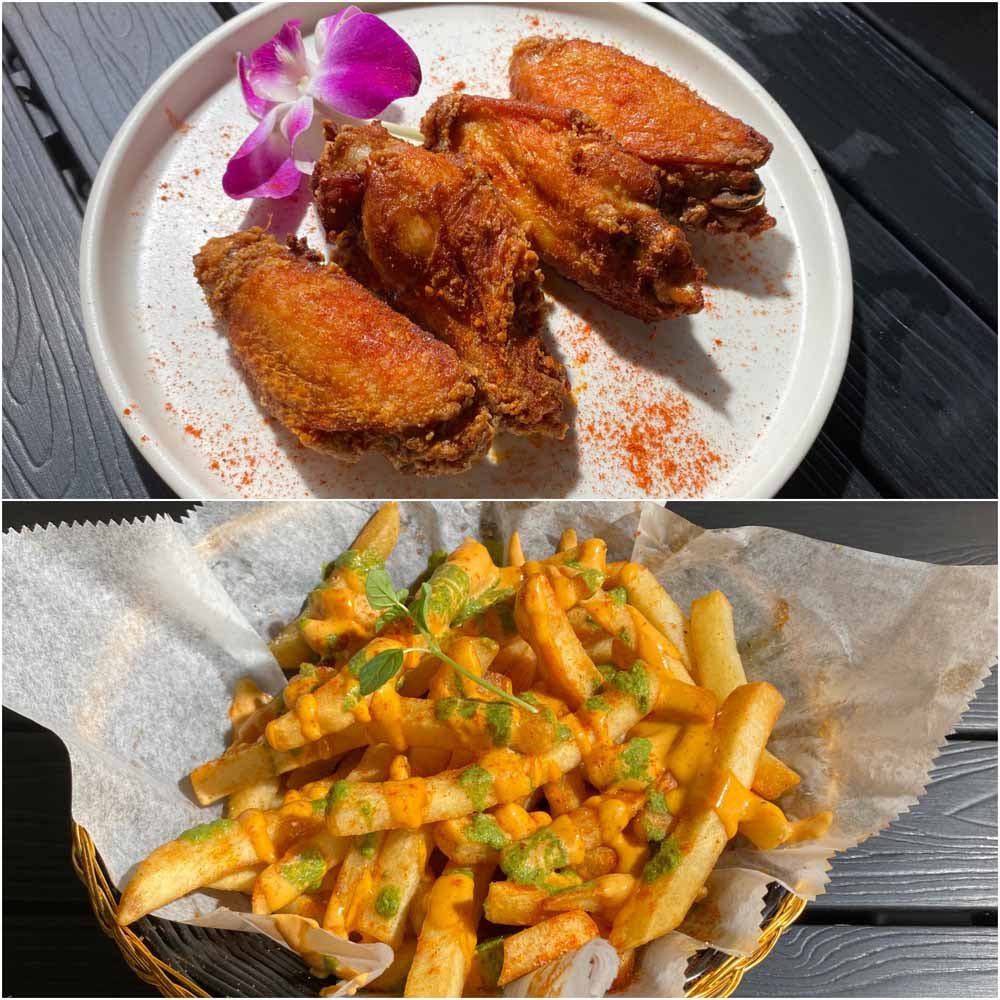 Just after we ordered our entrées, Chef Ghosh approached us asking how hot we would like our meal to be…mild, medium, or spicy. I love spicy food, but looked at him thinking about Indian spices. “I think medium is better,” and he confirmed, “You mean Indian medium, or American medium, because they are very different,”…it made me laugh, but he was oh so right. We chose Indian medium which meant American hot!

The two main dishes came with a bread basket (garlic and butter naan) – a perfect pairing, as both dishes were drenched in flamboyant savory sauces, begging for dipping.

Chef Sagar took a traditional Indian dish to the next level with his Cornish Hen Tikka Masala, described on the menu as classic yet modern butter chicken. It was delicate, swimming in a spicy creamy tomato sauce suited for sopping up with hot garlic naan. 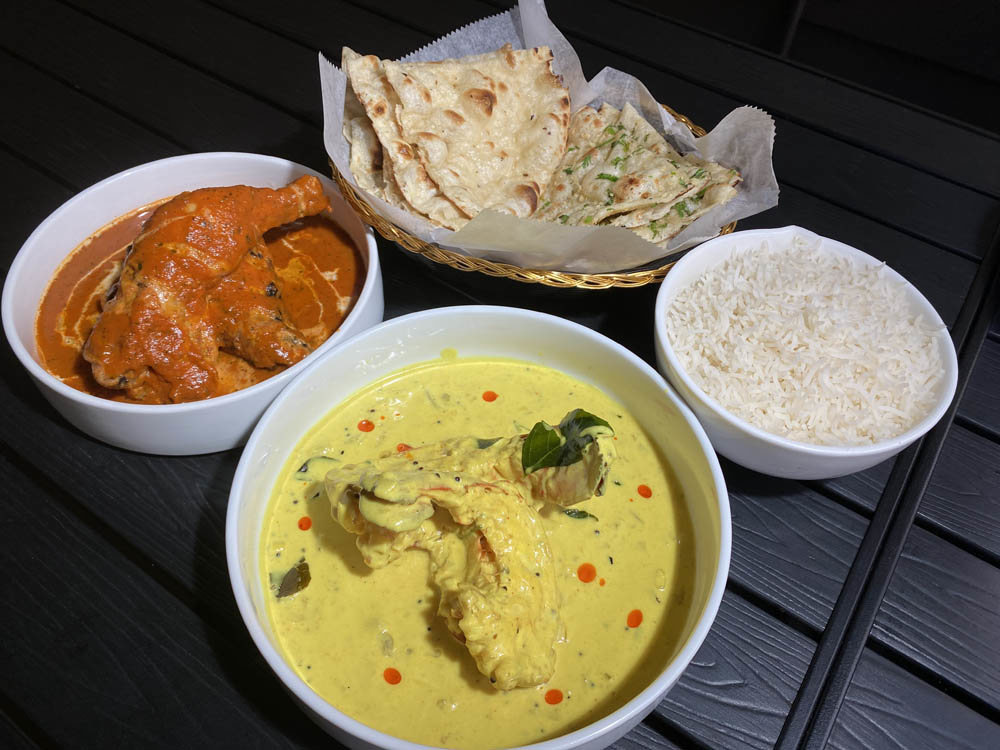 The Lobster Moilee (lobster cooked in sweet coconut milk, turmeric and curry leaves) was out of this world. This dish was speckled with mustard seeds as well. It was so creamy and luscious. So much flavor to slather onto a mound of flawlessly cooked rice.

Chef Ghosh kept the bar high for dessert. The Assorted Cannoli featured a Kesar Elaichi Shrikhand, Butterscotch and Chocolate Cannoli. He told us that he exchanged the usual cream, made with ricotta cheese, with cream made from hung curd which is a type of dahi. The curd is hung for two to three days to drain off the excess water and then it’s flavored with cardamom, saffron and sugar. I can say for sure the results were spectacular.

Of course the Mango Chambord Kulfi, a soothing fruity ice cream with Indian style Chambord liqueur, added to an exceptional ending to a bountiful feast. 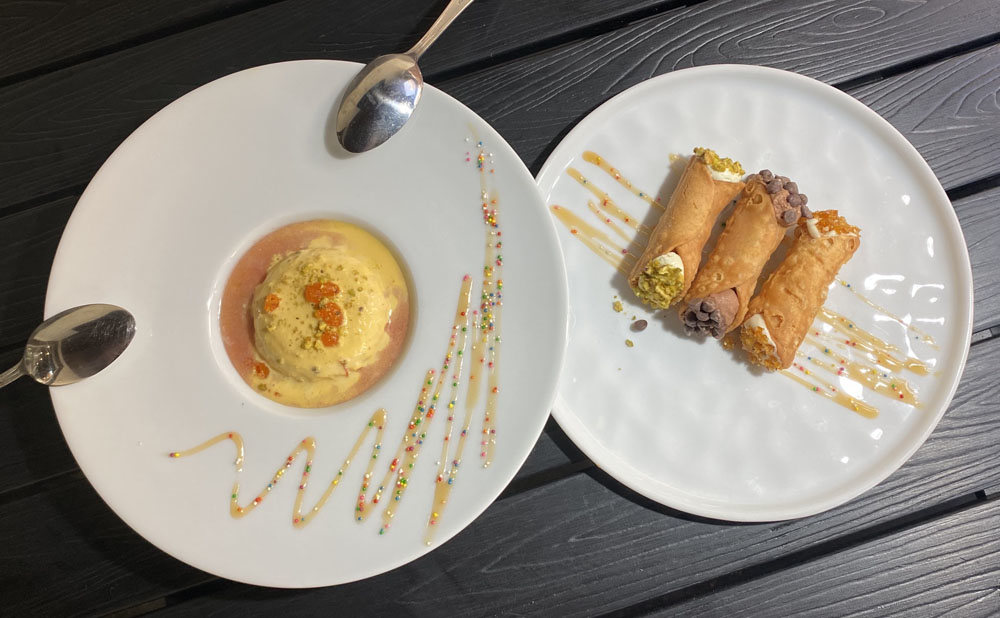 As a huge fan of classic Indian food, I must say, this fresh updated take on Indian cuisine prepared by Chef Ghosh was extraordinary. I highly recommend this restaurant. It is truly a flavorful experience.