After postponing their No Filter U.S. stadium tour, due to Mick Jagger’s heart surgery, the Rolling Stones were about to hit the stage at the Rose Bowl in Pasadena. It was finally time to see their re-scheduled performance, and I couldn’t have been more excited. Driving to Pasadena from the Westside during rush hour however was not something I was looking forward to. 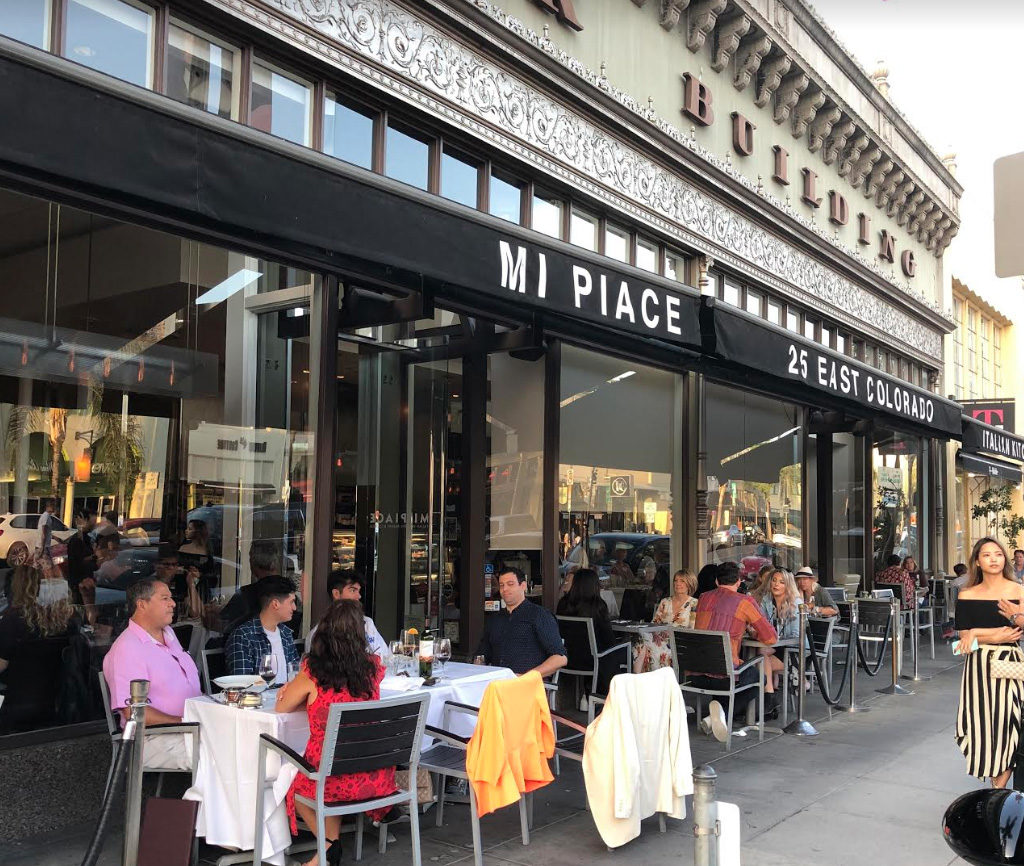 Mi Piace; all photos by Richard Bilow; courtesy of ETG;

My husband wanted to leave super early and have a nice dinner in Pasadena before the show. I had heard about a wonderful Italian restaurant in Old Town Pasadena called Mi Piace, so it seemed like the perfect time to check it out. As we drove down Colorado Avenue, we noticed people with Rolling Stones t-shirts everywhere. When we arrived at the restaurant, it was bustling. The positive energy was palpable. I guess I did not think about what one hundred thousand people advancing on Pasadena would look like, but apparently the owner of Mi Piace did. The staff was already in high gear at 4:30pm when we arrived, and the kitchen seemed to be keeping up. 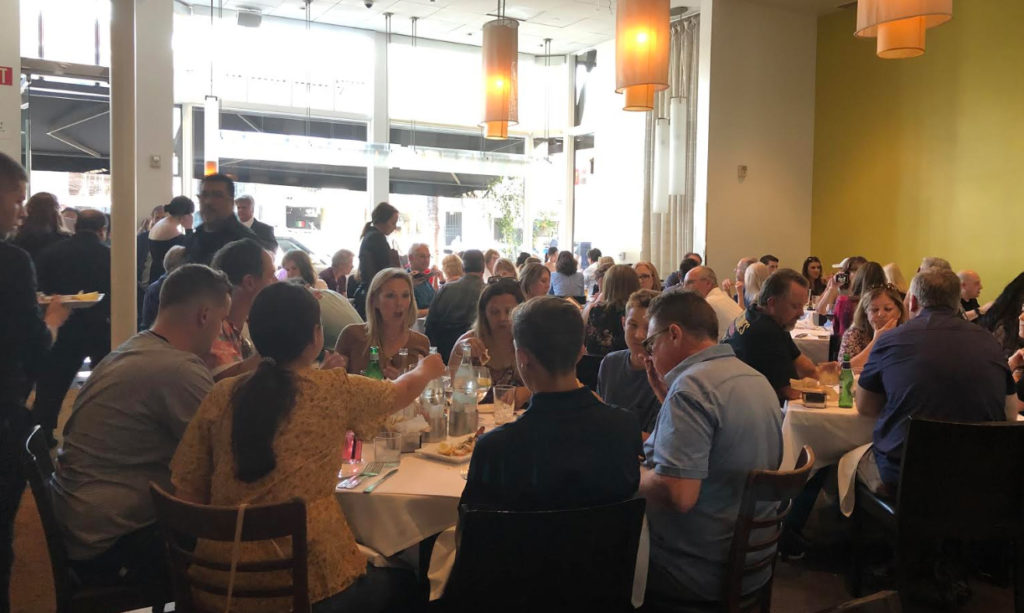 We were seated next to a friendly couple who immediately included us in a conversation that they were engaged in with a couple at the adjacent table. They were all going to see the Stones, and they were all kicking off their night with a meal at one of their favorite restaurants.

We were greeted by an amiable server (Tina) who recommended a red blend (Conundrum by Caymus, California), which I absolutely loved. This full bodied red offered notes of black cherry, and berry. I grew to appreciate it even more as the meal went on. 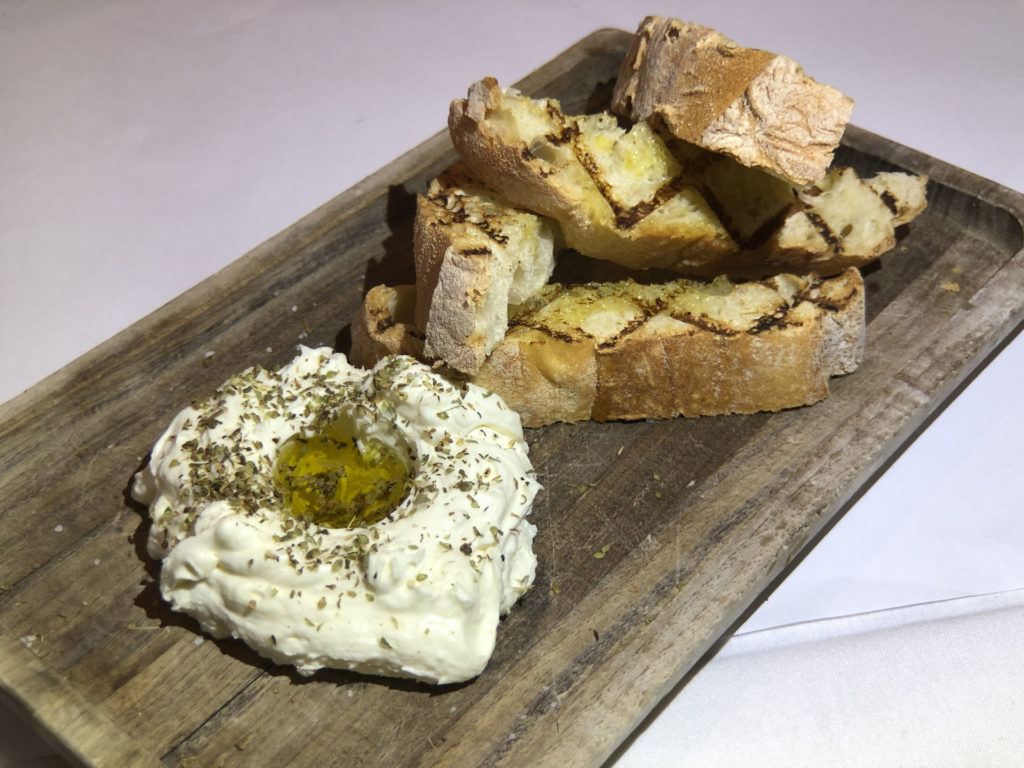 The owner (Armen Shirvanian) stopped by our table. He told us that Mi Piace has been around for thirty years. He also offered some menu recommendations. We took his advice and ordered the Caprese Burrata (organic heirloom tomatoes fresh Barrata cheese, basil chifffonade and Balsamic reduction), which was a wonderful choice…the homemade Burrata was so luscious and smooth, and so fresh. It was very distinct and different from other burratas I’ve tasted. Extra virgin olive oil was poured into the center of the mound of cheese, creating a pond of dipping bliss, with herbs scattered about. The crusty ciabatta grilled bread offered the appropriate crunch and served as an ever-so tasty tool to gather the creamy perfection. 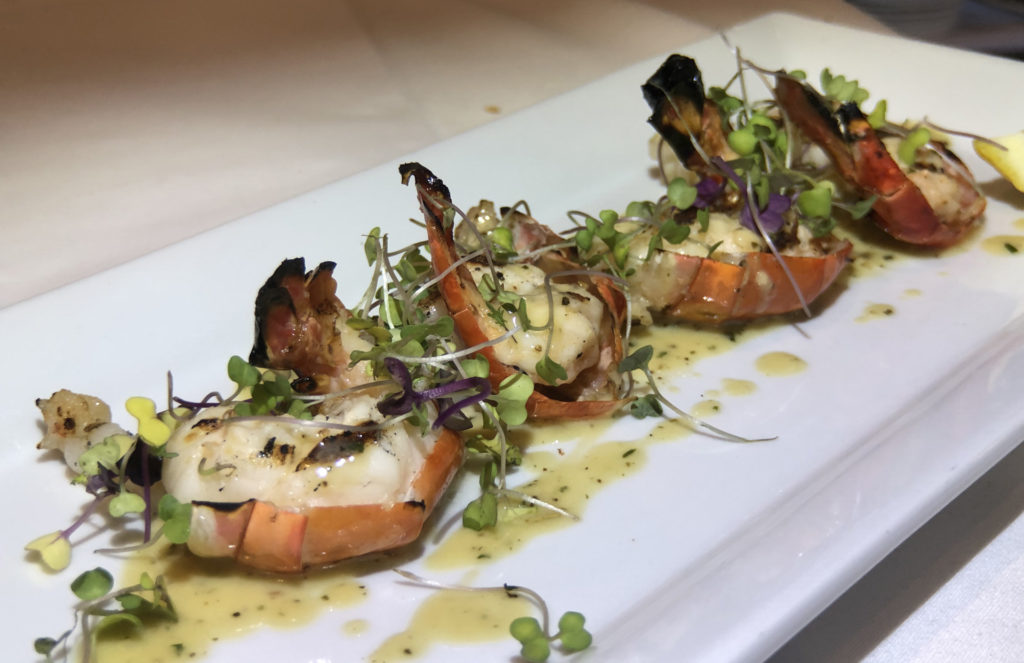 Next we enjoyed the Grilled Freshwater Prawns (garlic, shallots, parsley, Pernod butter). The prawns were filled with flavor and perfectly cooked…the sumptuous butter sauce clung to the sprouts strewn throughout the dish as they adorned the delicate prawns.

I must say, the staff was amazing. With so much going on, they appeared to be unfazed by the rush of eccentric concert goers. The restaurant was even playing the music of the Stones to the obvious delight of their vintage rocker patrons. You could see that the owner (Armen Shirvanian) thrived on the energy of a busy dining room, as he chatted with other patrons, while helping to clear tables. 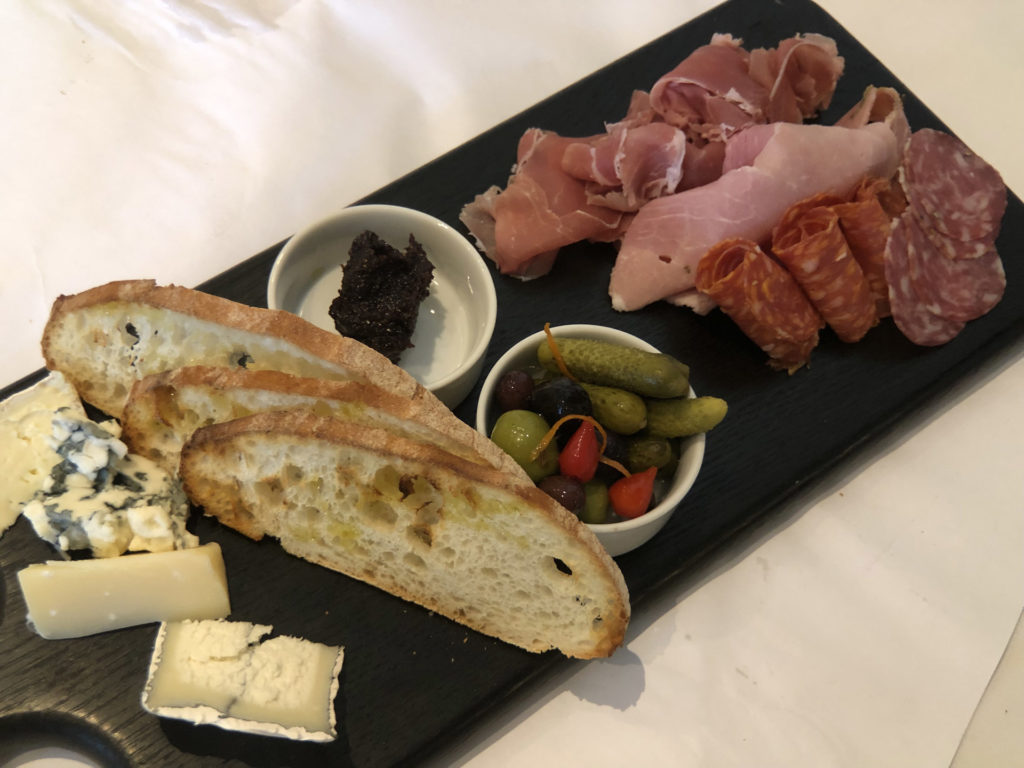 Chef Gils Saulnier came to our table bearing a beautiful display of Charcuterie and Cheese (Fra’ Mani Rosemary ham, 24-month San Daniele Prosciutto, Calabresse, Saucisson, assorted cheese, Cornichons, olives, and fig marmalade). It proved to be a delightful mix of tastes ranging from tangy to spicy. The meats were especially savory, and the cheeses were exquisite.

Both were outstanding. There is nothing like homemade pasta, particularly at Mi Piace…it is divine. It is one of their specialties. The Spaghetti Al Pomodoro was simple yet alluring. The light tomato sauce hugged the al dente pasta, while embracing its stark contrast. The fragrant basil, oil, shallots and garlic intermingled in a beautiful union of flavor. I was also very impressed with the Pappardelle Bolognese, with its three different meats. The noodles were a bit more tender and in a comforting way reminded me of my mother’s lasagna…so tasty.

At this point, many of our dining companions had already left for the Rose Bowl. The show was about to start, so we checked in with our staff writer, who was covering the concert, to confirm that he had arrived. He was in. The opening act had just started. 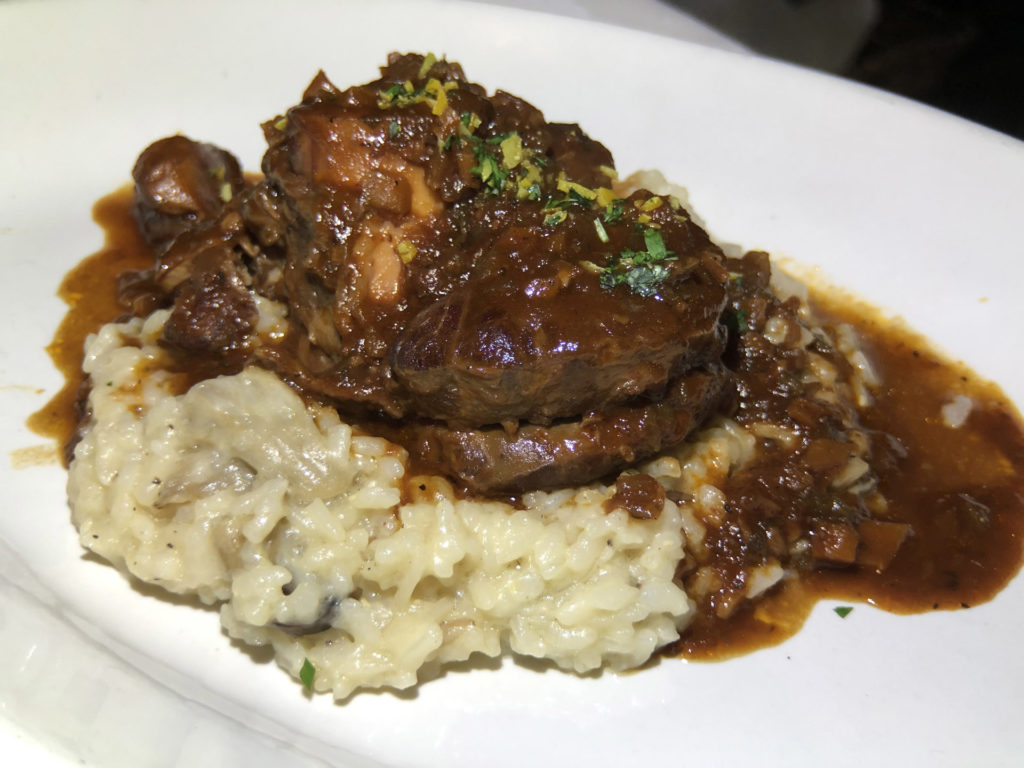 Excited to see the show, but still loving our meal, we continued our dining extravaganza and ordered an Osso Bucco di Vitello from the Signature Cuts portion of the menu. The 16oz slow-braised veal shank was unbelievably tender. The rich sauce was magnificent and was served atop a mushroom risotto – this was a fantastic pairing. The deep flavorful Osso Bucco sauce mingled with the creamy risotto, creating an exceptional result…among the best I’ve had. 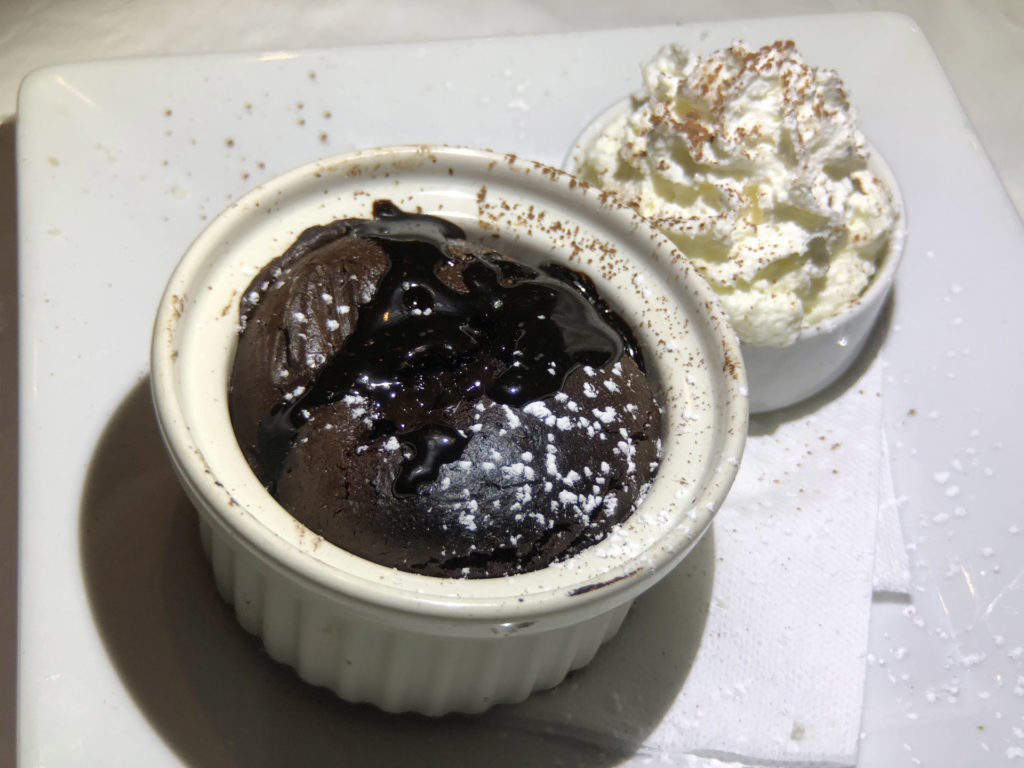 Much to our surprise, a dessert called Chocolate Soup appeared on our table. It literally took my breath away. The Stones could wait. I did not want to rush through this delicacy. The dessert consisted of Mi Piace’s signature bittersweet Belgian flourless chocolate soufflé, served with a side of Chantilly cream. The delicious dark chocolate crisp top was matched only by its exquisite gooey chocolate center. The light fluffy cream cleansed our pallets between each bite.

As I took my last bite of this tantalizing treat…Mick Jagger’s voice could be heard over the sound system singing…“I can’t get no satisfaction.” That’s when I thought. This is NOT true…I definitely ‘got my satisfaction’ and so much more tonight. This was a spectacular Italian feast, and we were off to see one of the greatest rock bands of all time. If you want to treat your taste buds, and get some of your own satisfaction, be sure to visit Mi Piace located at 25 E Colorado Blvd, Ste 205, Pasadena, CA 91105; https://www.mipiace.com

If you are interested in reading a review of the Rolling Stones’ concert by one of our staff writers, CLICK HERE or visit the Music drop-down of the Performance Reviews Page on ETG’s sister website LAArtParty.com 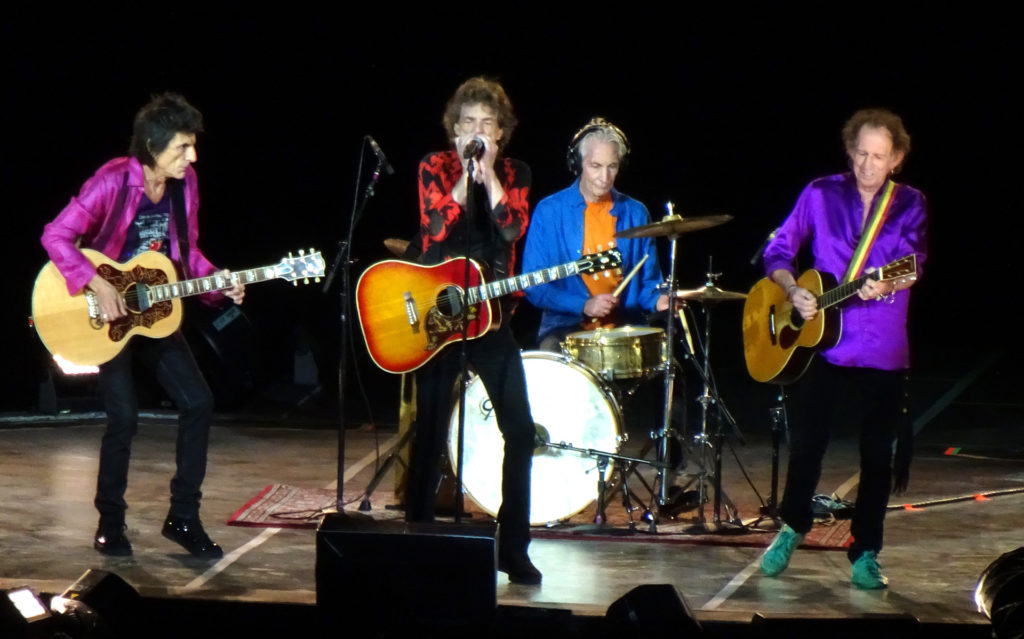 Rolling Stones at the Rose Bowl Stadium in Pasadena; photo by Richard Bilow; courtesy of LAArtParty.com