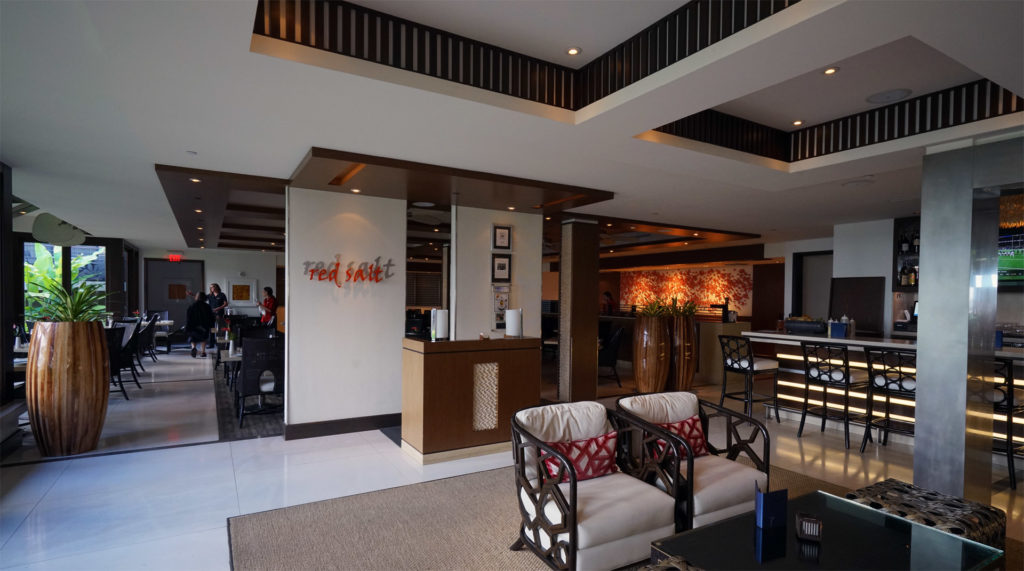 I made special arrangements to dine here…the food was simply outstanding. This romantic restaurant is located just off the beach by the beautifully landscaped palm tree lined swimming pool. We sat at a window seat and watched the waves roll in. Starting off with a shaken martini at our table, we enjoyed a tropical cocktail called the Wipe Out and a delicious glass of 2015 Ken Wright Cellars Willamette Valley Pinot Noir. 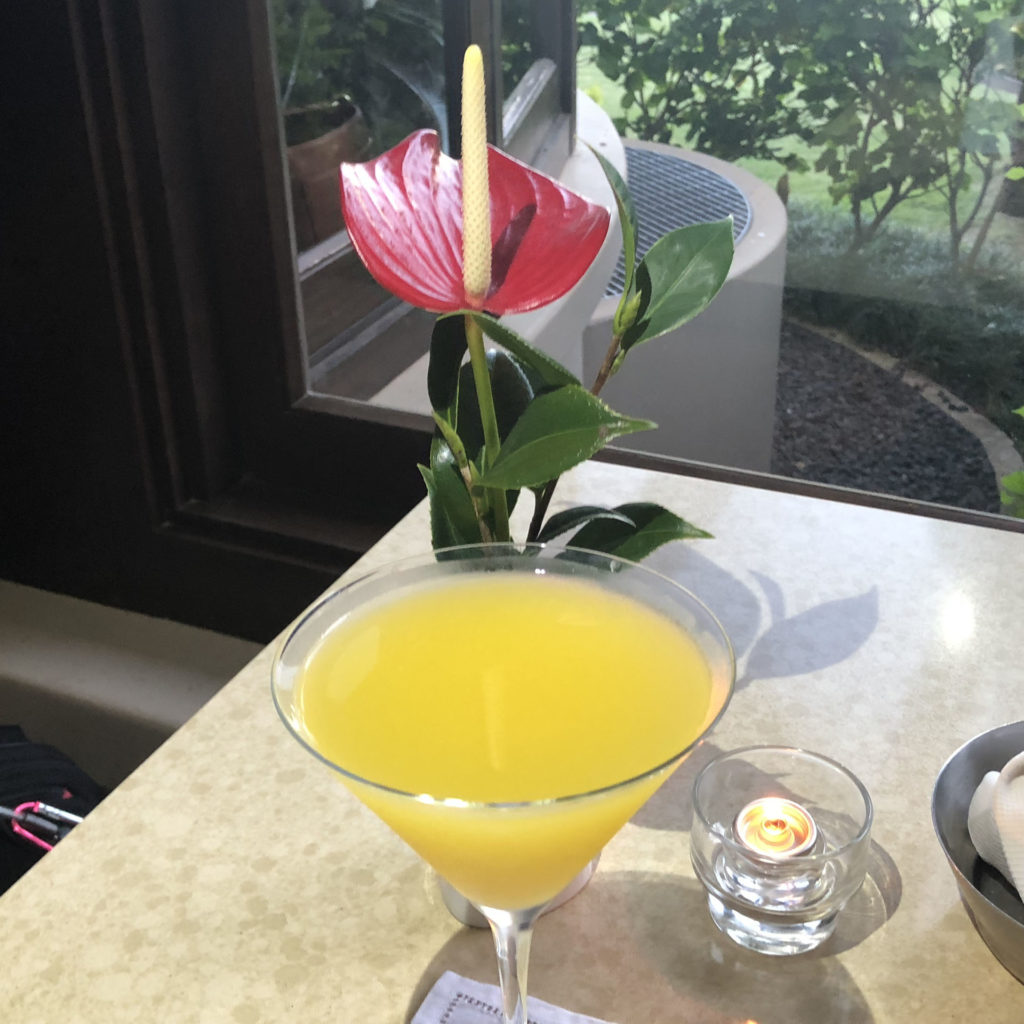 The Wipe Out Cocktail, Red Salt; photo by Kathy Leonardo courtesy of ETG

The Wipe Out was fruity yet balanced and included Ciroc Mango Vodka, Kettel Citroen, passion fruit, mango and pineapple. Although my husband Richard ordered it, I must confess, I enjoyed most of it. After all, he had to drive…so I was doing him a favor.

Our meal began with an appetizer of Seared Hokkaido Scallops (Sweet Roasted Corn, Portuguese Sausage, Charred Cherry Tomatoes, Champagne Beurre Blanc). The perfectly cooked scallops were swimming in a shallow pool of delicious sauce with roasted corn, and Champagne Beurre Blanc. The charred tomatoes brought a sweetness that complimented this savory yet subtle dish. We both loved it. 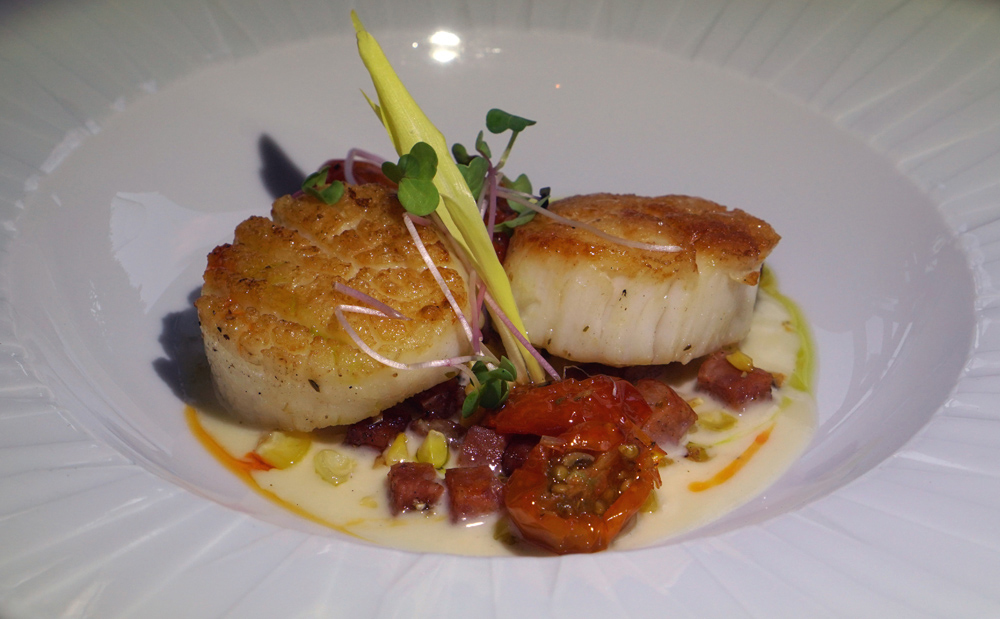 For my entrée, I chose the Furikake & Wasabi-Crusted Seared Ahi (Creamy Mushroom Risotto, Asparagus), while my husband went right for the meat. His 16 oz. Prime Ribeye Steak with Roasted Brussels Sprouts (Applewood Smoked Bacon, Peppercorn Brandy Demi Glaze) was perfectly cooked to order (medium rare) and had layers of distinct flavors. The glaze complimented the tender meat, and the bacon brought it to a whole other level. Thank goodness it was such a large portion, or he may not have shared it with me. 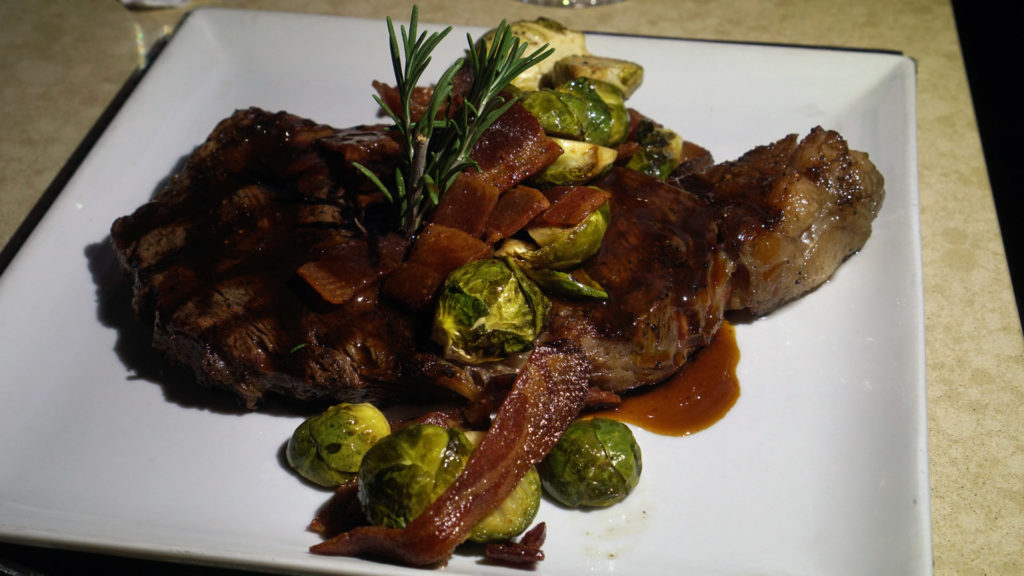 My dish was beautifully plated, like a tribute to a sculpture or monument. The asparagus was the foundation, with a heaping mound of creamy mushroom risotto on top. The main attraction was a rare (as ordered) sublime piece of tuna, encrusted with furikake and wasabi, with sesame seeds, and topped with a green and red edible garnish of what appeared to be some type of sprouts. It reminded me of a feathery hat to top off one’s best Sunday dress. It was pure heaven… the combination of the creamy mushroom risotto grounded the light exquisite smooth flavor of the tuna. The crunch of asparagus rounding out the dish. Needless to say, we enjoyed the meal. Although, we were thoroughly satiated, the affable waitress persuaded us to have dessert. 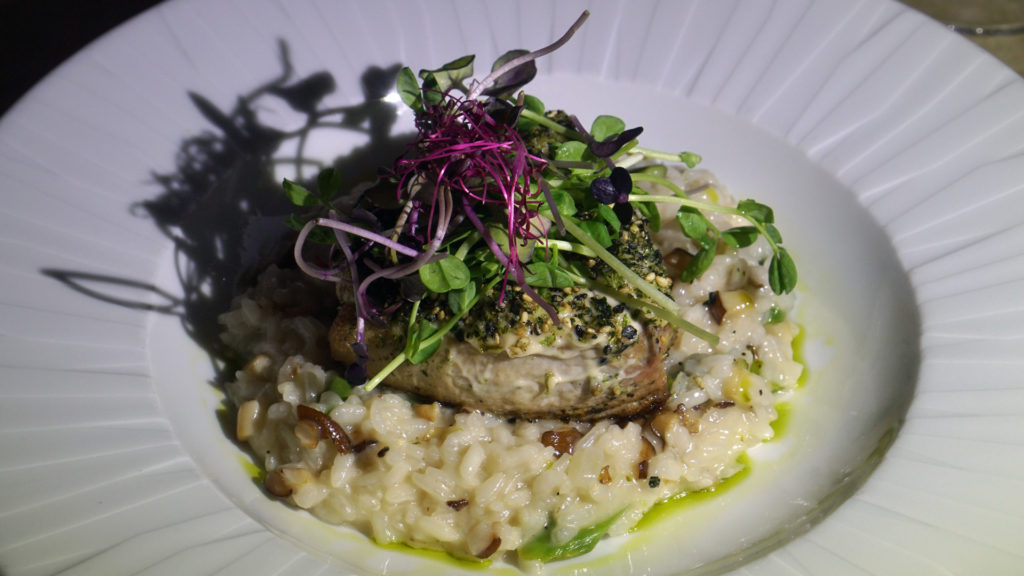