The Fairmont Miramar is an iconic treasure built in the late 1800s. The original owners (John and Georgina Jones) constructed an elaborate mansion and named it Miramar, which means ‘view of the ocean’ in Spanish. John P. Jones, a Nevada Senator was the founder of Santa Monica. After Jones died, his wife and son converted the Miramar mansion into a hotel and bar.

As the story goes – an Australian sailor who frequented the hotel bar, asked if he could pay his tab by way of barter – offering a fig tree (which he had on his boat at the Santa Monica Pier). Georgina Jones accepted the trade, and the tree was planted in the front garden. It has grown to over eighty feet, and this historic Moreton Bay Fig Tree stands center stage on the property to this day. 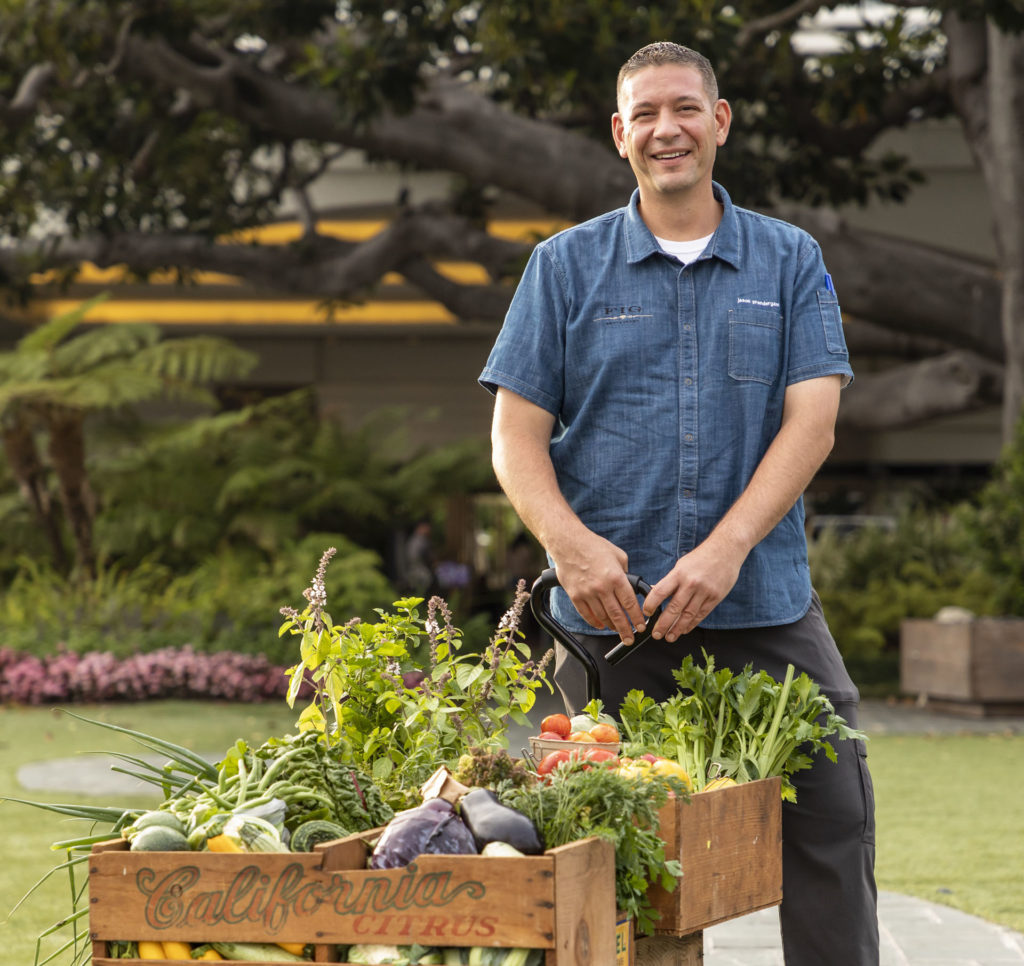 At the helm of FIG restaurant is Chef Jason Prendergast, who is trained in the classic French tradition. While frequenting Westside farmer’s markets, he goes the extra mile and arrives with breakfast for ‘his’ farmers, demonstrating his great appreciation for their contribution to his menu offerings. Bringing a farm to table sensibility to the restaurant…with a no waste policy is a key aspect of the Fig dining experience. Additionally, a nod is given to many of the vendors by spotlighting their names on certain menu items. FIG Santa Monica has a stunning reputation. Its “FIG AT FIVE” deal (half off all menu items from 5pm – 6pm) allows customers to enjoy exceptional cuisine at a great price point.

Cucumber Margarita and a Blackberry Bramble; photo by Kathy Leonardo; courtesy of ETG

When my husband and I arrived there was a line to get in, which quickly moved along. We were seated by a window overlooking the pool. I immediately relaxed, taking in the charming, warm and casual atmosphere. We ordered some cocktails – a Cucumber Margarita and a Blackberry Bramble – adding to the carefree and celebratory atmosphere. Chef Prendergast came out to greet us and explained that the menu was seasonal and was updated every few months. He suggested some of his favorite dishes, and our dining experience soon began. The Parkerhouse Rolls (Beurre de Baratte) arrived at the table. Baked in a cast iron skillet in the wood fire oven…they were so warm and toasty.

The Kaluga Caviar was simply divine. Sitting upon a throne of crème fraiche onion dip, the caviar was celebrated like a majestic queen surrounded by her mignons, a gathering of homemade crispy potato chips. The combination of ingredients was unexpected and exceptional, with its multi-layered textures and flavors. The menu gave kudos to the Weiser Family farm for this appetizer. 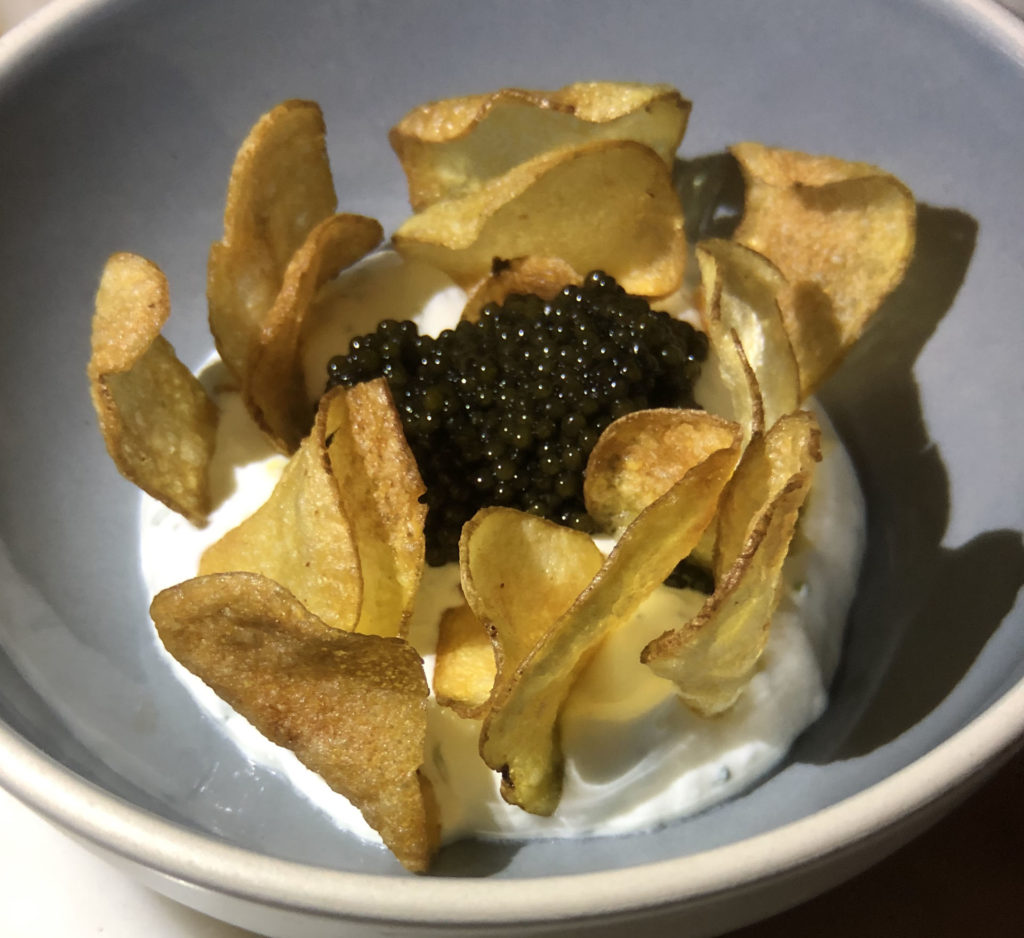 The Smoked Duroc Pork Ribs (chipotle mop sauce, scarlet runner bean salad and pickle brine-crème fraiche dressing) offered a robust and deep-flavored tasty bite. The chipotle mop sauce was sweet yet tangy. The ribs were piled onto a bed of scarlet runner beans which were bathing in a pickle brine-crème fraiche dressing. The pickled string beans and the watermelon radish added additional savory zest to the dish. 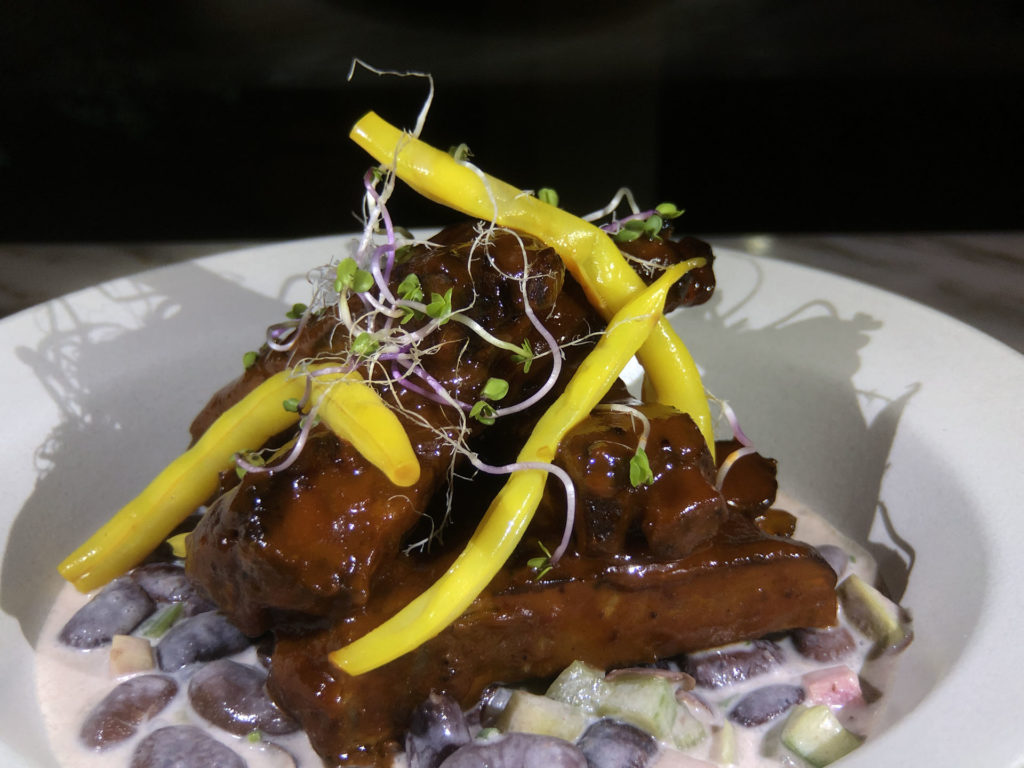 The Lady Edison Bone-In Country Ham (cheddar biscuits, Sorghum mustard, and pickles) was another delectable appetizer which featured the pickled strings beans that my partner and I both loved sooo much. The warm cheddar biscuits were a comforting companion to the bold briny flavor of the ham. 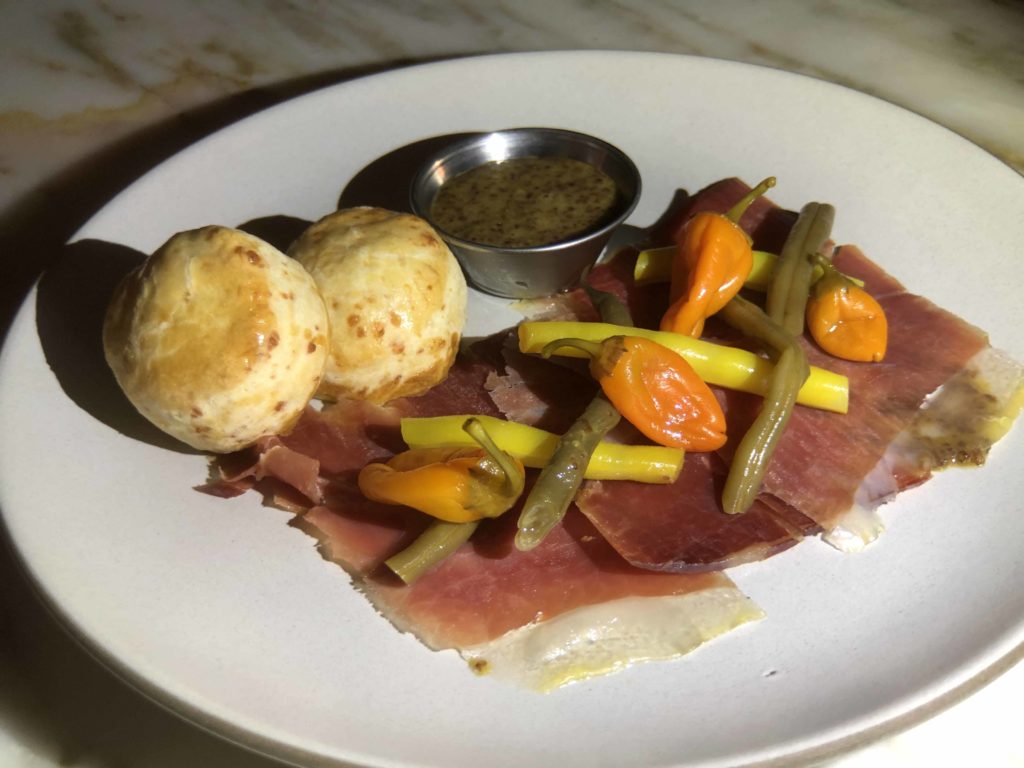 I cannot say enough about the pasta dishes at FIG. The Hand Rolled Capellini Pasta (Oregon chanterelles and chives) was a dream come true for me. I am a huge fan of all things truffle. The dish was literally covered with white truffles. I was in heaven. It was super flavorful, buttery and loaded with perfectly cooked chanterelle mushrooms. 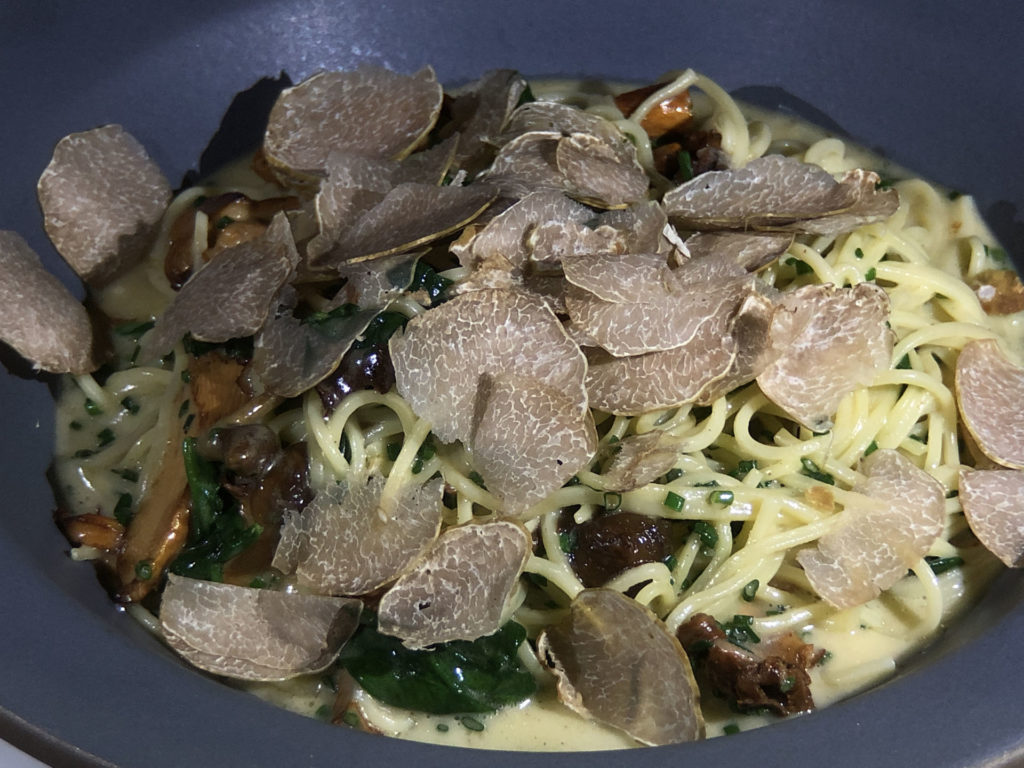 The second pasta, a Corn Agnolotti (pine nuts basil and watercress), took me by surprise. The first bite of these luscious rectangular ravioli astonished my taste buds. I was taken aback by a burst of sweet cream within the pasta – delish. The exquisite velvety sauce drenched the dish and its featured ingredients (corn, watercress) as it clung to each precious Agnolotto.

Alas…I had to save room for one final entree. The Flannery Beef Bone-in center cut New York Strip Steak (rosemary fries and garlic butter) arrived without a steak knife. After cutting into it, I realized why. It was so tender, that no steak knife was needed at all. Known for its dry aged steak, the Flannery steak was one of the best, I have ever tasted. The subtle fresh hint of rosemary brought basic french fries to next level taste. 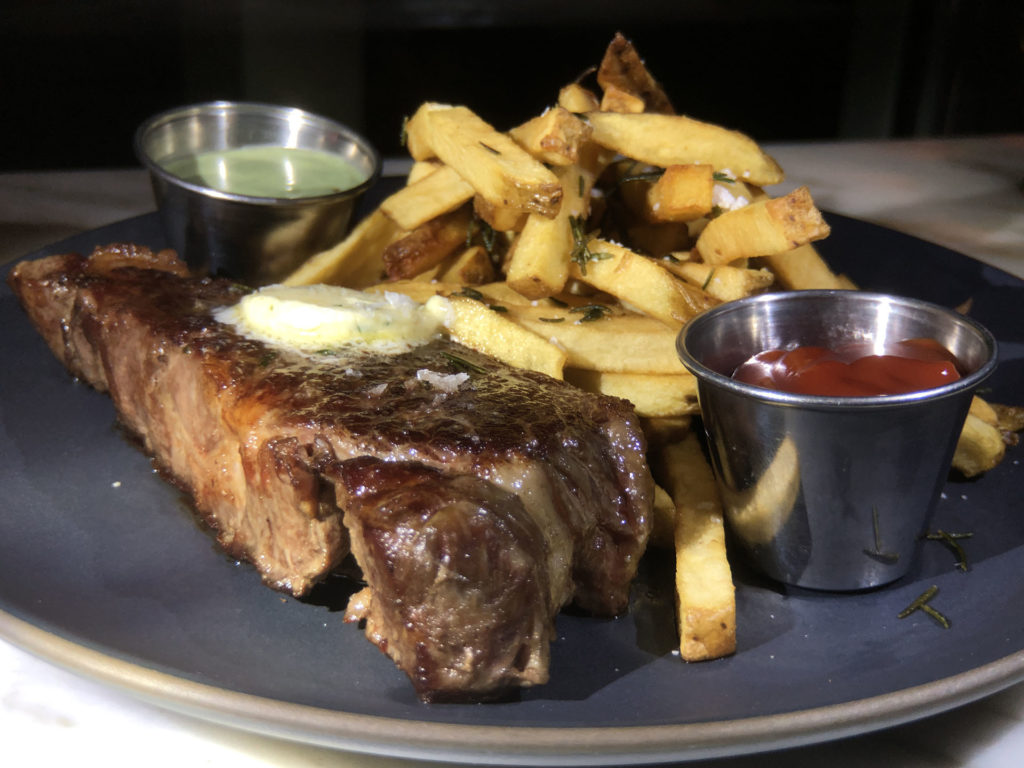 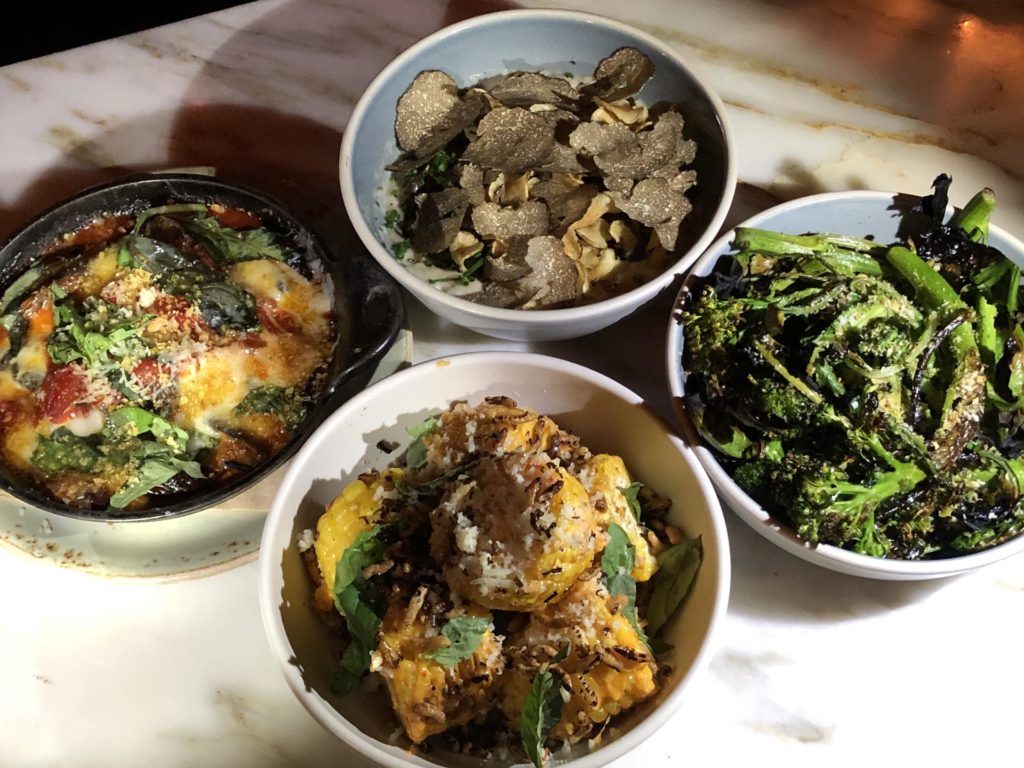 Tasty side dishes; photo by Kathy Leonardo; courtesy of ETG

We assumed we could not possibly take one more bite, but then the Roasted Pear and Ginger Cobbler (oats streusel and rosemary ice cream) arrived. This warm delicacy could not be ignored. Also baked in the wood fire oven, it offered a sensuous vibrant crunch exploding with flavor…simply delicious. 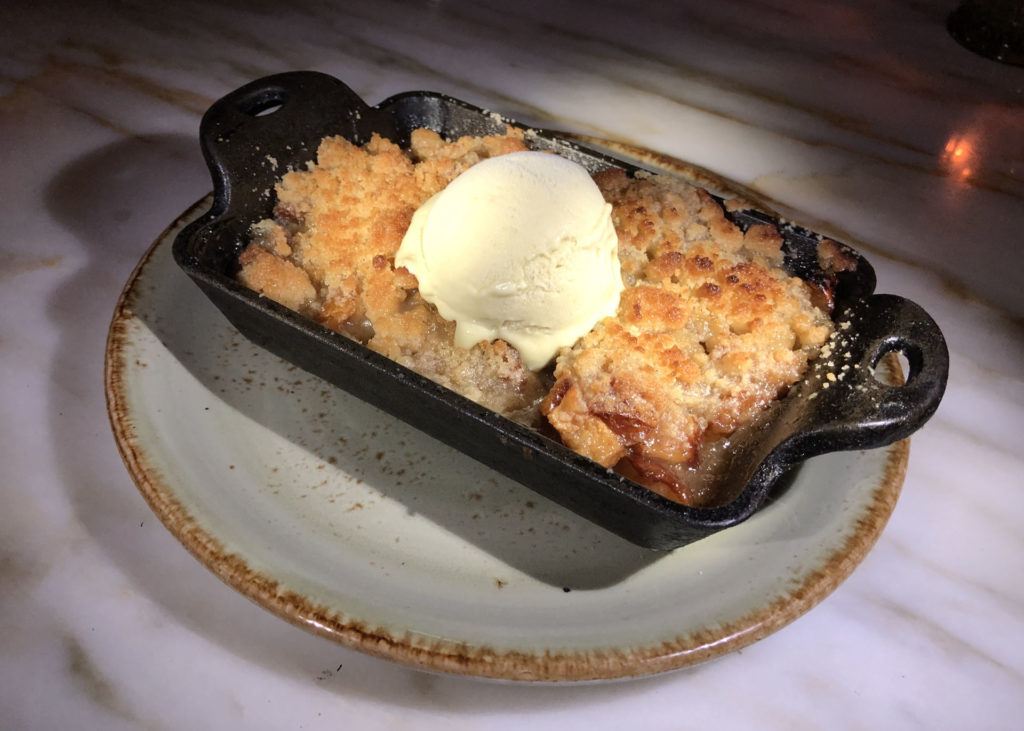 I am looking forward to returning soon to experiencing the next (seasonal) menu. I will of course take advantage of the FIG at FIVE happy hour (5pm-6pm half-off special). This is quite possibly the only happy hour in LA which offers half price on every menu item, including bottles of wine. Happy hour at Fig attracts lots of local Santa Monica residents as well as hotel guests, creating a very special community dining experience.

Much like its historic fig tree, Fig Santa Monica stands out from a sea of wonderful Los Angeles restaurants. Fig Santa Monica is located in the Fairmont Miramar at 101 Wilshire Boulevard, Santa Monica, 90401; http://www.figsantamonica.com/ https://www.fairmont.com/santa-monica/