Masters of Taste returned to the Rose Bowl in Pasadena after a two year hiatus due to the pandemic. It was an exceptional day – this would be the first food festival for many of us to attend since covid. A celebratory spirit filled the air! 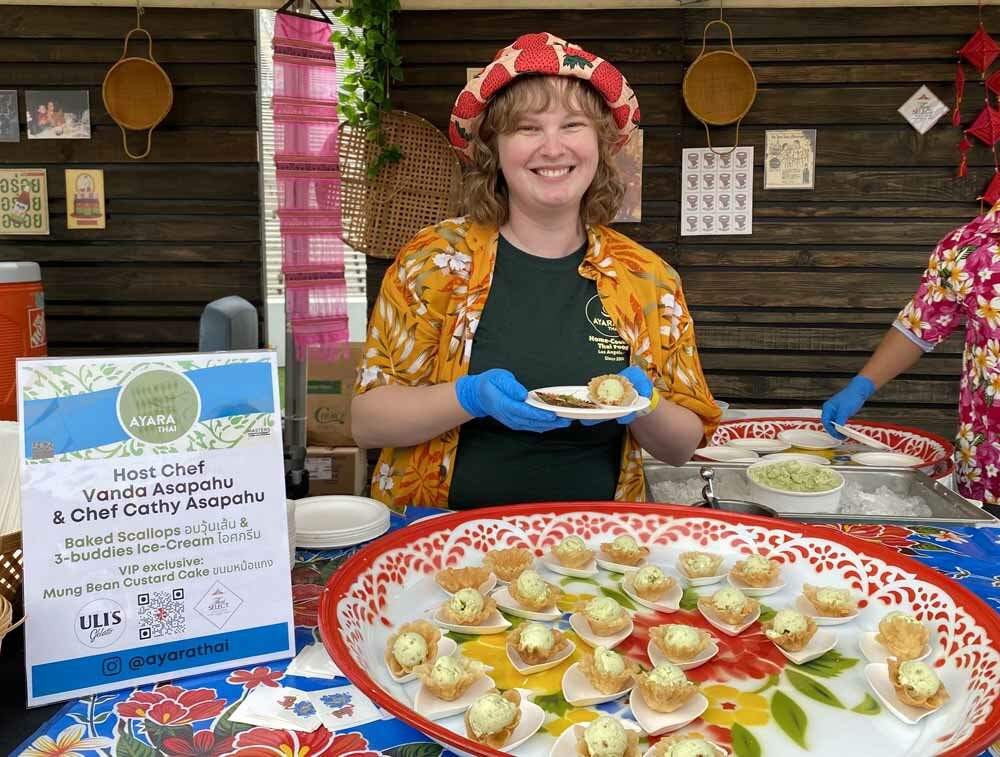 Each year Masters of Taste generously donates one hundred percent of their proceeds to the Union Station Homeless Services, making it a truly unique and meaningful food festival. This year, I headed straight to the Thai section. Chef Vanda Asapahu (owner of Ayara Thai) was selected as the first-ever female host of the Masters of Taste. She called up some of her buddies to participate, and judging from the lines to get their food, the guests were thrilled.

Songkran (the Thai New Year) takes place during April, so the Thai SELECT Pavilion was incorporated into the festival. There was a general store along with several other Thai restaurants. Chef Vanda challenged each chef to create their offering (whether it be savory or sweet) using a well-known paste called sahm kler (white peppercorn, garlic, and cilantro root). I enjoyed a savory ice cream with these flavors, and although it may sound strange, it was delicious. The baked scallop was also quite tantalizing.

Other favorite Thai dishes came from Otus Thai Kitchen & Coffee, and Luv2Eat Thai Bistro. I continued my taste bud journey with some zesty empanadas from World empanadas, and a scrumptious corn tostado from Pez Cantina. Next, I tasted a delectable Hamachi and Salmon Ceviche from La Boheme, and then a perfectly cooked piece of steak from Alexander’s Steakhouse – yum! 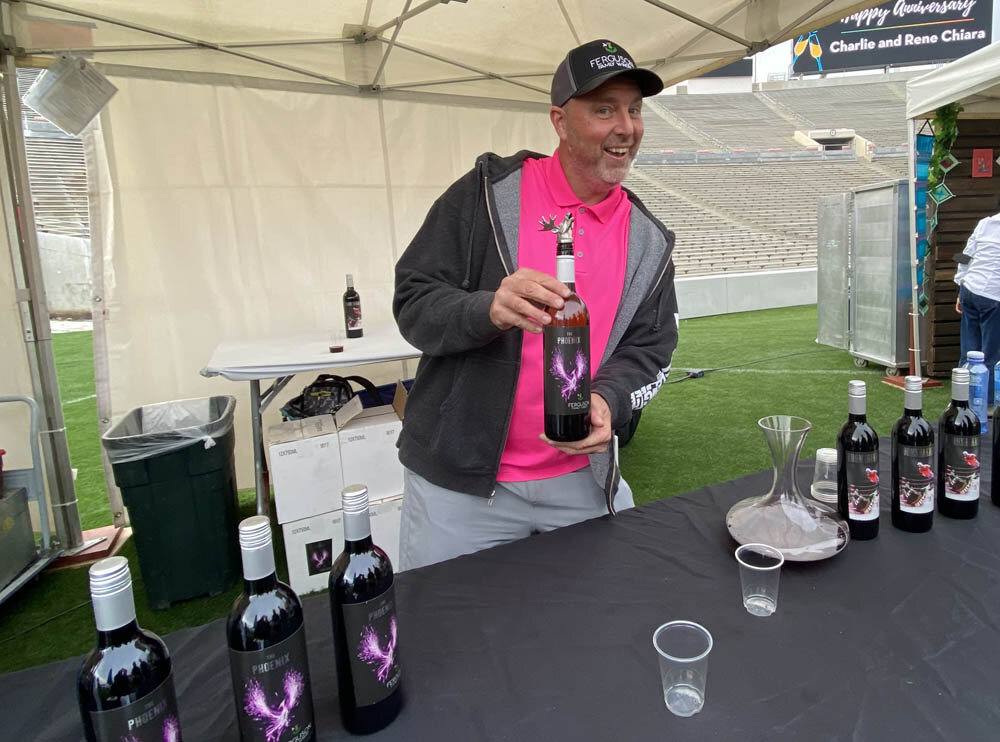 I was enjoying two full-bodied wines by the Ferguson Family Winery…the Phoenix 2017 Paso Robles Zinfindel and the Boomshakalaka 2017 Clarksburg Petite Sira (love that name, and the taste), when I spotted Anne Miskey CEO of the Union Station Homeless Services nonprofit. She is 100% dedicated to serving the community. She explained that the organization provides services, even after placement in a home. It was fantastic to hear her passion for the nonprofit. As we all know a food festival that offers 100 percent of its proceeds is unheard of, so it meant even more to me being in the midst of this community driven, and supportive event. Masters of Taste also partners with another great organization, Careers Through Culinary Arts Program, Los Angeles (C-CAP LA), a national 501(c)(3) non-profit founded by culinary educator Richard Grausman and Co-Chaired by Chef Marcus Samuelsson.

After spending a few minutes with Anne and a local philanthropist, I became smitten by the Garganelli Pasta (sausage and wild fennel ragout) served by Drago Centro, along with a Pesto Alla Trapaneses provided by Celestino Ristorante. The pasta paired perfectly with an Ascension Cellars 2016 Trinity GSM, which was a medium-bodied Grenache blend that offered hints of strawberry and cedar – delish. 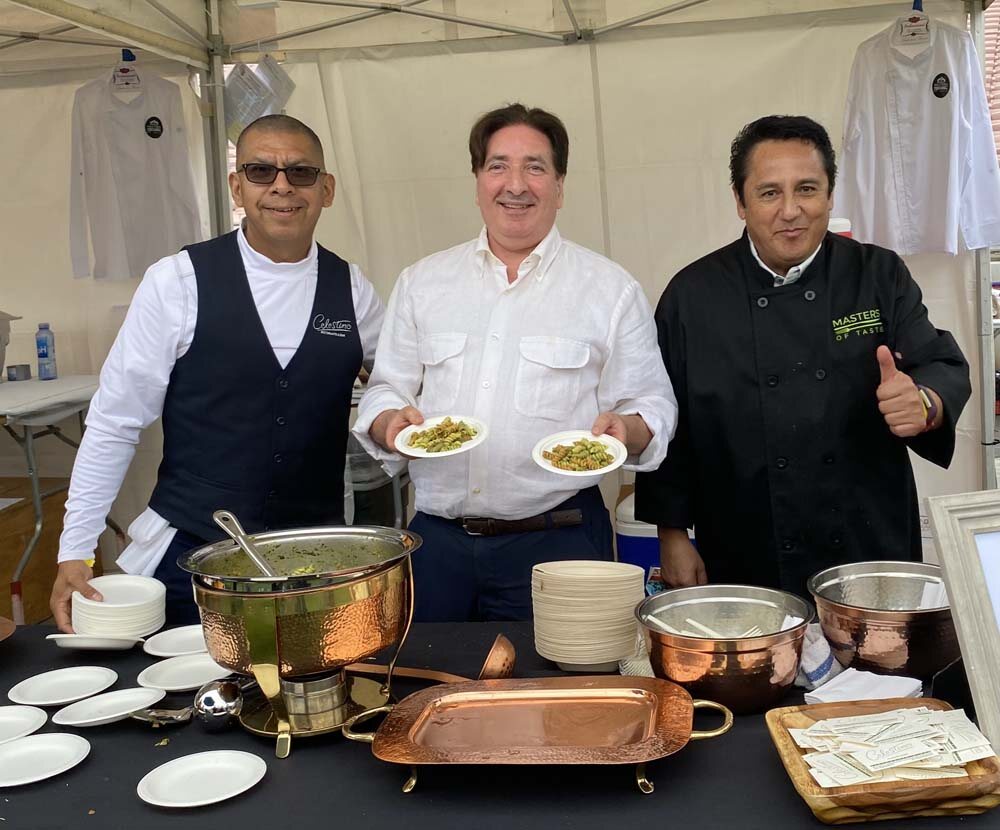 Other wines that I was impressed with were poured by the Hitching Post Winery, Golden Star Vineyards & Winery, and a longtime favorite of mine – Obvious Wines. Of course some of my friends that attended the event with me took delight in the many spirit vendors as well as some of the craft beer offered.

I would be remiss if I did not mention the desserts which were spectacular. I absolutely fell in love with the brownie from Etoile Filante Patisserie – the Marcarons were so delicate…they were dreamy (see photo below). Fantasy Frostings provided a variety of luscious sliced cakes…Cocoa Chocolate Cake, and Crème Brû·lée Cake were my top picks. More delicious sweets came from Butter Cake Shoppe, and Bertha Mae’s Brownies.

This year’s event was sold out, as it is every year…so be sure to purchase tickets early for next year’s event. The VIP tickets, which give early entry and some other perks sold out earlier than ever. So secure your tickets in advance to support a great cause and enjoy the Masters of Taste. If you are visiting Los Angeles and you enjoy food festivals…this is one not to be missed! https://mastersoftastela.com 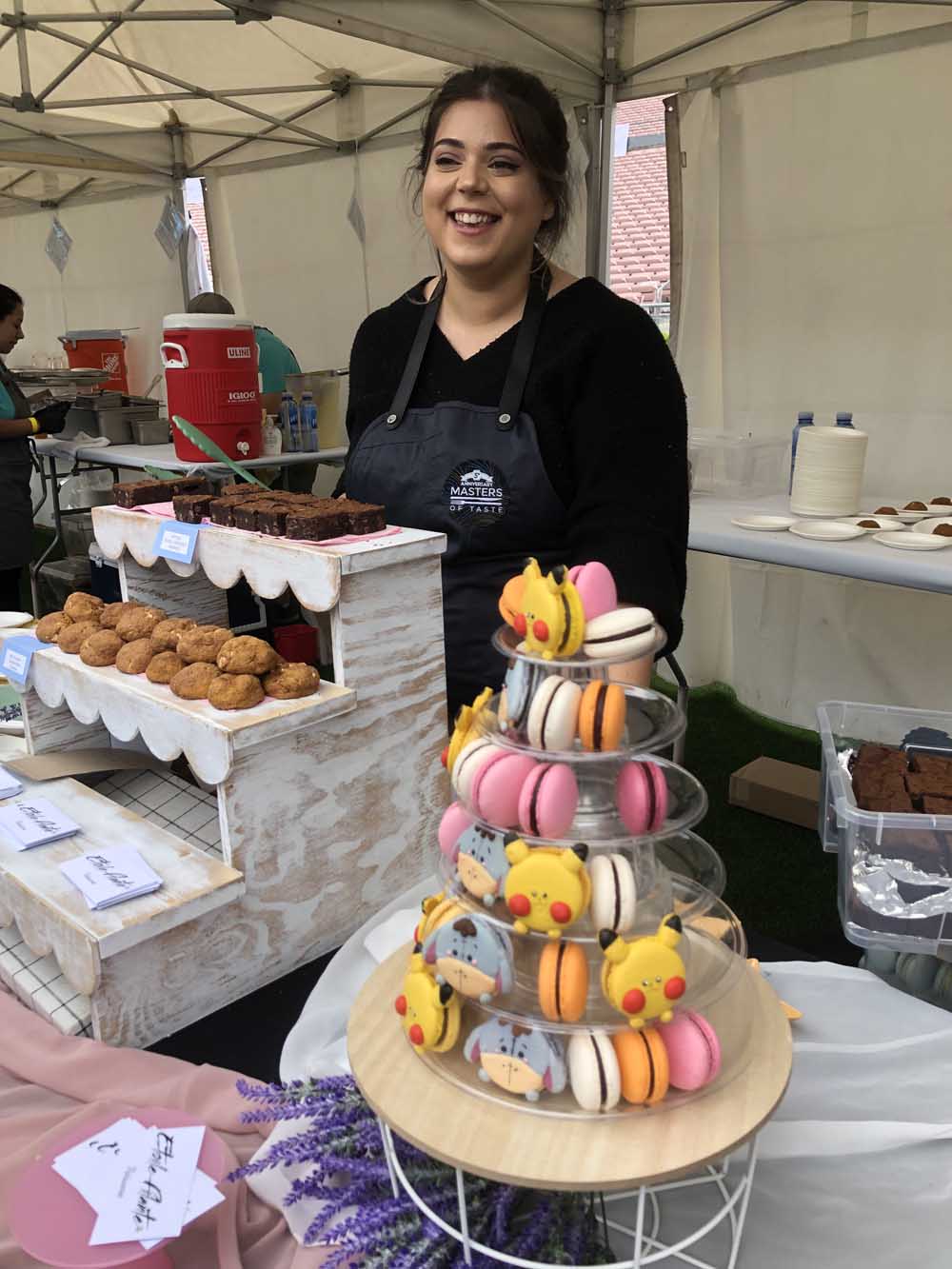