Life can be busy. Unexpected things come up, and we tend to forget about taking time for ourselves. So, when family or business commitments take me to an area out of Los Angeles, I often tack on an extra day or two to unwind and experience of the local sites. When my commitments are up the coast from LA…that’s even better. The entire California coast is peppered with amazing destinations.

My husband (photographer Richard Bilow), and I have been gathering info for upcoming articles as part of an ongoing series about the California coast. See my article – “Unplug with Wine & Wildflowers” about wine tasting, and dining in Paso Robles, and Richard’s article – “Chasing the Super Bloom” featuring the flowers and trails of Carrizo Plains National Monument in Santa Margarita, both located on the Stories section of ETG.

We were scheduled to be in Santa Maria in June (2019), so we decided to check out the area as part of our California Coastal Series. We also booked another couple of days at Pismo Beach to relax by the shore.

We enjoyed a relaxing stay at the Radisson Hotel Santa Maria. I had a chance to visit the rooms that a few of our friends stayed in, which were all quite lovely, spacious and comfortable. Our room came with a desk, a chaise lounge, and a balcony overlooking the atrium. There was also a large dining area in the lobby which was a perfect place to meet up with a group. Read more details about the Radisson Hotel HERE on the Destinations Section, under the U.S. drop-down on the Lodging Page.

The next day we decided to stop by the Santa Maria Museum of Flight. It has an interesting history. Starting out as an airfield, it was founded in 1927 by Captain G. Allan Hancock. It is most known for sponsoring the trans-Pacific flight by Charles Kingsford-Smith and three other men in a Fokker Tri-motor, the “Southern Cross,” in 1928. The aircrafts are on view at the museum.

Later we met up with some friends at Bob Orach/Westgate Park (1800 Westgate Road, Santa Maria). This seven-acre park also hosts movies at night during the summer months. If you are traveling with kids, it offers a large playground as well. Visit the City of Santa Maria website for a full list of local parks. Since we heard that Santa Maria is known its special brand of BBQ…a rub, not a sauce, we stopped for some BBQ at the Hitching Post, located close by in Casmalia. It did not disappoint.

The following day we headed to Pismo Beach to do some more relaxing for the next couple of days. The Seacrest Oceanfront Hotel presented us with a laid back beach vibe. As soon as I walked in, I smelled fresh baked chocolate cookies (free to hotel guests), and started to relax. A two-story half-moon shaped main building faced the ocean…as if its arms were outstretched to embrace the sea.

We stayed in the four-story building adjacent to the crescent moon. It featured a roof deck with a fire pit and an amazing ocean view. Our room was light and airy with whitewashed wood plank walls and a balcony and a beautiful view of the ocean and the resort. The sprawling property has stairs leading down to the beach, a large pool and several hot tubs. With one open until 11pm, we enjoyed a lovely late night soak after dinner. We met a couple who returns to stay at the hotel every year. Read more details about Seacrest Oceanfront Hotel HERE on the Destinations Section, under the U.S. drop-down on the Lodging Page.

The Seacrest Oceanfront Hotel view from our room; photo by Richard Bilow; courtesy of ETG;

Dinner was fantastic. One of the hotel staff suggested an ocean view restaurant called Sea Venture. Situated on the third floor of the Sea Venture Hotel, it’s a great place to watch the sunset. The dining area presented an exceptional panoramic view of the beach with the iconic pier to the north. I was impressed with the cuisine of Chef Casey Walcott. See my full restaurant review HERE – under the Stories Section. 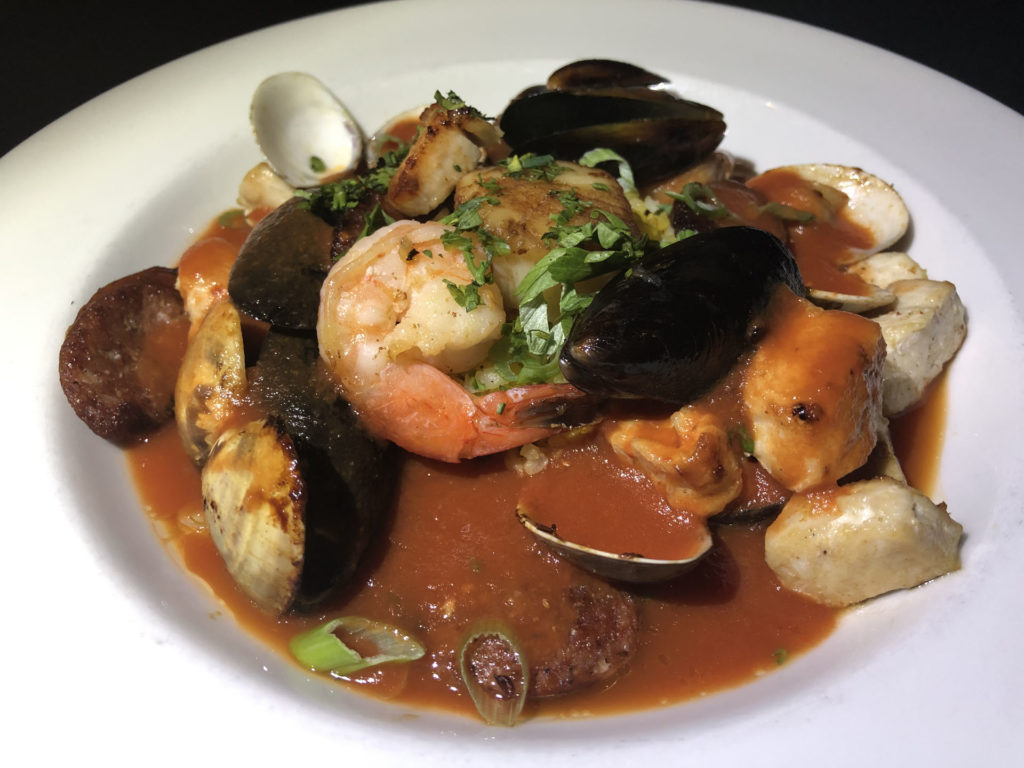 The following day I decided to check out the town of Pismo Beach and do some shopping, while my husband went up to Morrow Bay to photograph the sea otters. Although I love those little cuties, I just felt like checking out the town. Plus, some retail therapy was calling my name. Richard captured some amazing images. 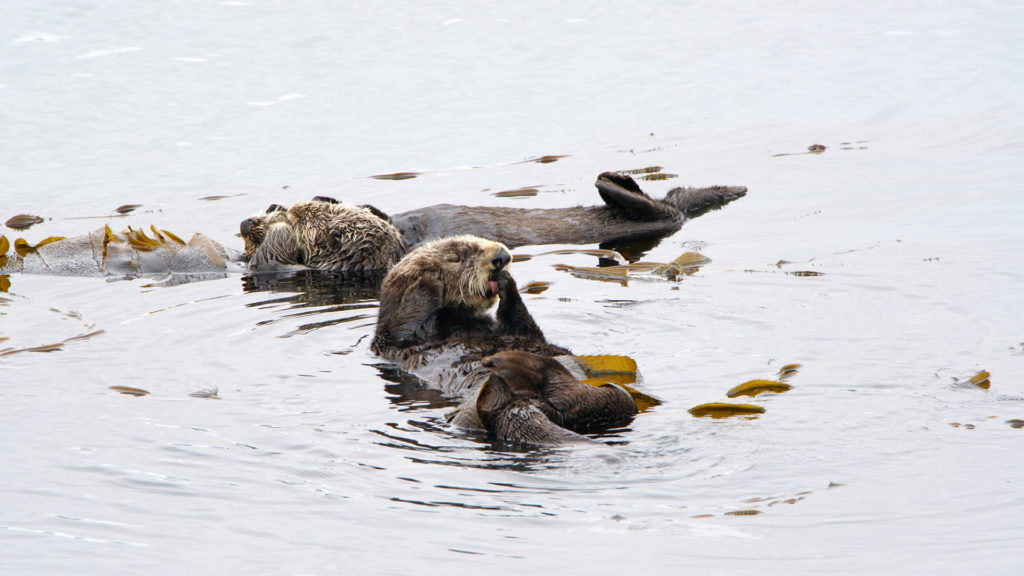 The main tourist area of the town is located on Pomeroy Avenue, just inland from the Pier. Restaurants and kitschy shops run up and down the street along with casual places to eat. I did a quick walk-thru to familiarize myself with the shopping, dining, and sweets situation. As I walked by Splash café, I saw a long line wrapping around the corner. I had heard about this counter style casual eatery located just down from the pier. When I finally decided to jump online (which was long all day long), it went pretty fast. 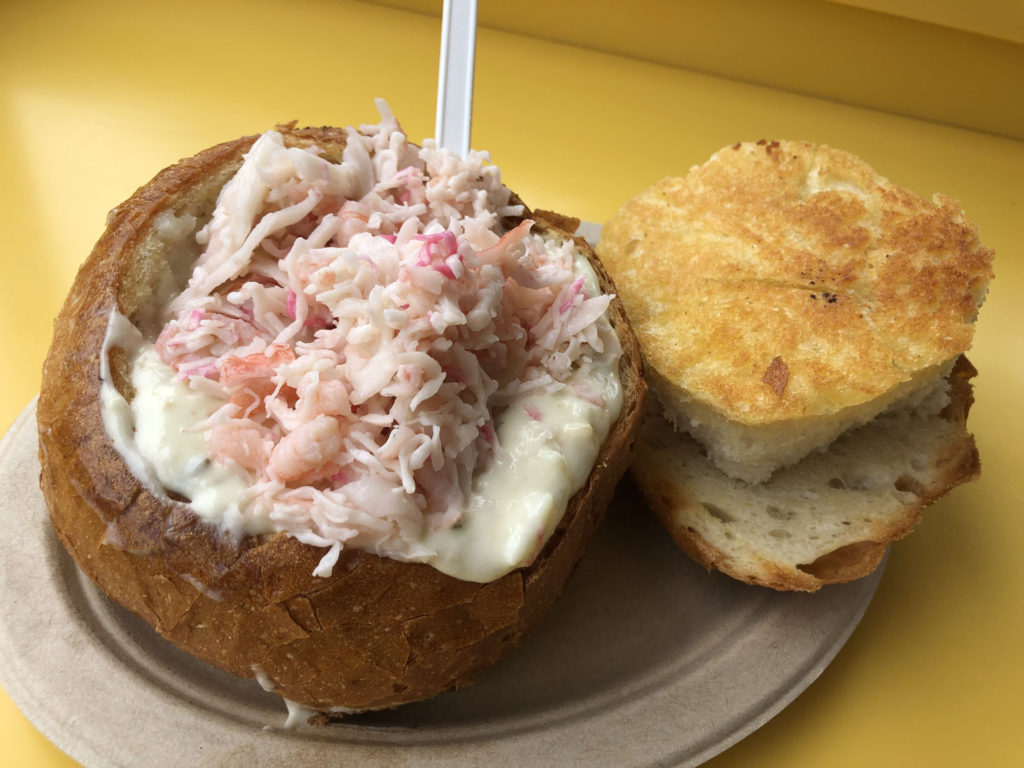 I opted for the all-time favorite bread bowl filled with luscious creamy thick clam chowder and topped with the seafood add-on. This was recommended by a gentleman in line ahead of me. I’m glad I took his advice. See my Locally Owned Pismo Beach Eats article on the Destinations Page for more info about Splash.

I had to walk off that delicious clam chowder, so I took a long walk on the pier. It was so pretty. Local artists had painted electrical boxes, and the view of the beach and ocean was stunning, as well as the town of Pismo Beach behind me.

Photo taken from the Pier of the Town of Pismo Beach; photo by Kathy Leonardo; courtesy of ETG;

I enjoyed a full day of shopping. Locally owned shops such as Penny V’s had all sorts of fun beachy items and Hawaiian inspired attire. Ashtie’s Beach Shack provided lots of Pismo Beach memorabilia, such as t-shirts, sweatshirts and local beach fashions. On Dolliver Street, I found a quaint shop called This and That which opened about six months ago in early 2019. I popped into Pismo Bowl, that has been around since 1939. This retro bowling alley is a great place for families. In addition to the bowling alley, the front portion of the establishment, featured games (skee-ball, pinball etc.), and a classic counter top with red vinyl swivel stools where you could order some pop or a vanilla shake. I was tempted, but stayed strong and walked out. However, that was when I spotted the Pismo Beach Candy Company. There were so many nifty options…fudge, suckers, chocolates and all kinds of unusual taffy flavors…s’mores, popcorn, green caramel apple, mango chili, and more. I left with a bag of taffy. What can I say? I had to keep up my strength. 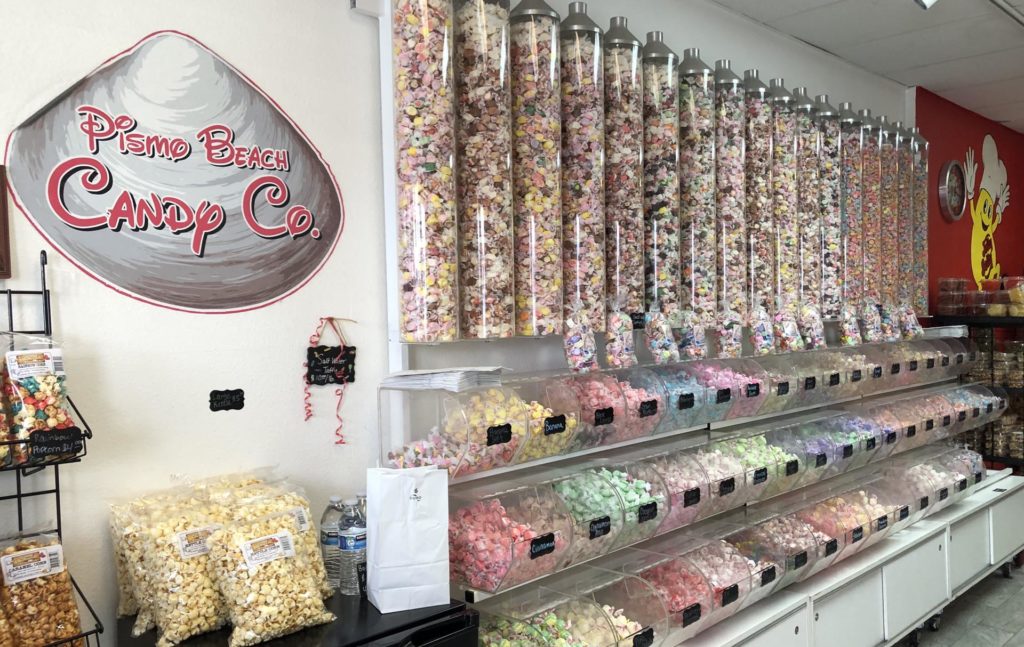 Then I stumbled into a charming upscale shop called Drift, located at the Inn at the Pier. I was drawn in by the beautiful jewelry. Owner Shelly St. Peter opened Drift in April 2019. I had a great conversation with her. As the buyer for the boutique, St. Peter said she is always looking for original fashions, and vendors who make hand crafted jewelry. St. Peter relocated to Pismo beach five years ago, after she married her husband who has lived in Pismo for twenty years. She recommended that I visit the Rooftop – a casual bar/restaurant upstairs – at the Inn at the Pier Hotel. I took her advice. it was pretty fabulous and offered great views of the area. I enjoyed some respite and a mimosa…yum, then headed out to do more shopping. 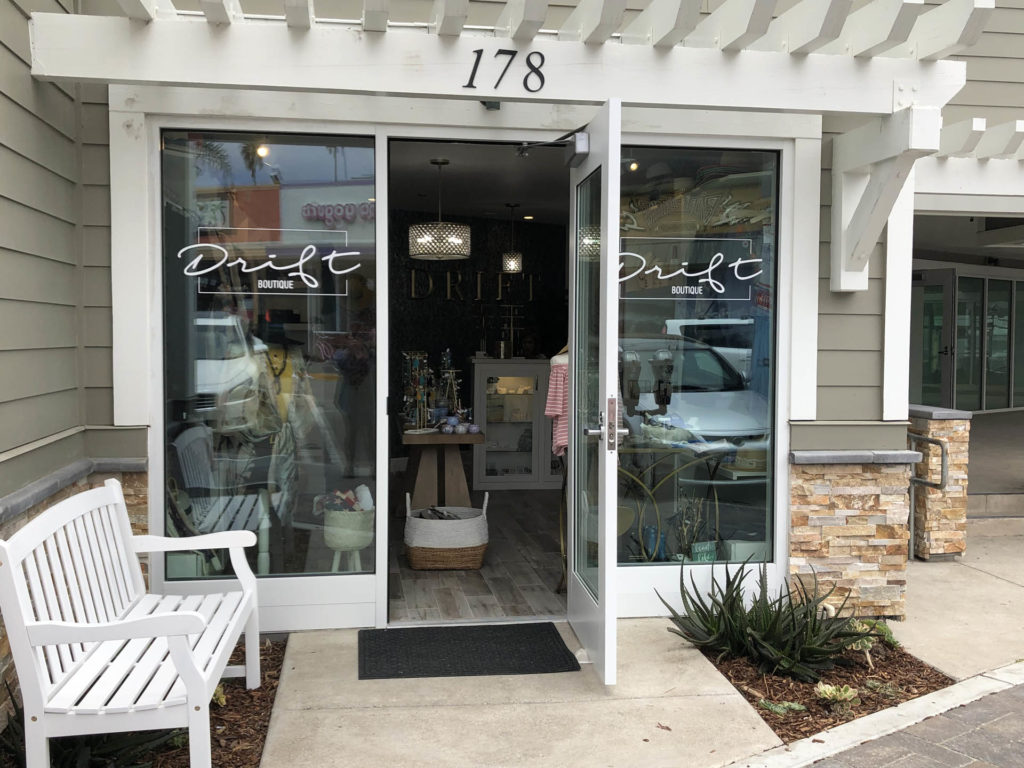 It was then that my hubby called to find out where to meet me for dinner. After all my snacking, I was not quite ready for a big meal, but I knew he would love Mo’s BBQ. I had stopped in earlier to scope it out. Mo’s was the real deal. Opening over twenty years ago, the casual restaurant has a line of BBQ sauces available for sale. For our meal we shared the BBQ sampler, which featured some of everything…Philly Phil’s Ribs, ¼ BBQ Chicken and Shredded Pork with fries. It was plenty of food for both of us. We even took some home, along with some of that delicious sauce. For additional info, about Mo’s BBQ, see my Locally Owned Pismo Beach Eats article (on the Destinations Section of ETG). 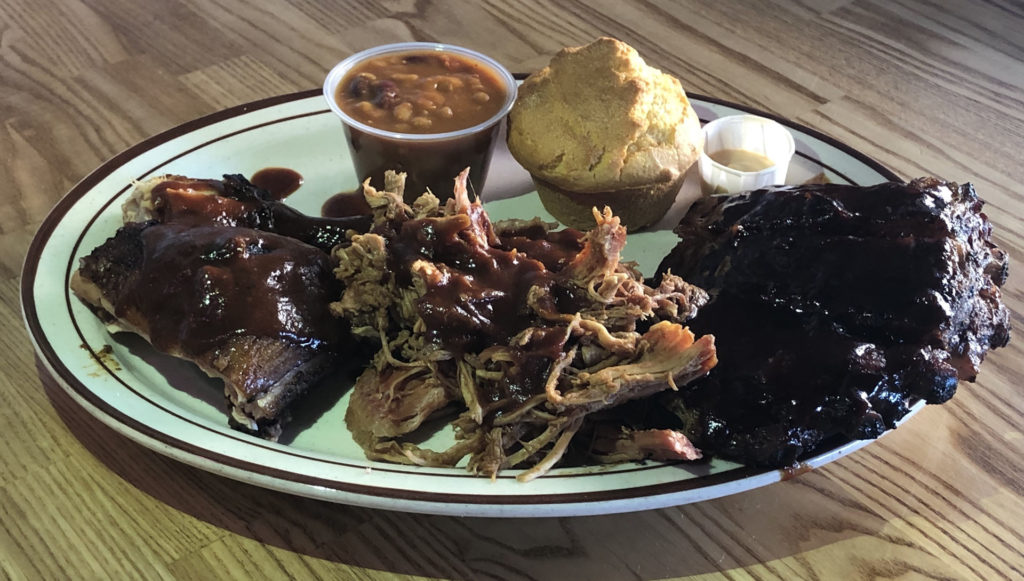 After all that BBQ, my husband had a hankering for something sweet. I remembered seeing a bakery on Dolliver Street. Old West Cinnamon Rolls has the most amazing Cinnamon buns – OMG. I am so glad I noticed it. We both agreed…this was hands down the BEST cinnamon roll we had ever eaten. Seriously, if you find yourself in Pismo Beach be sure to you go there. Read more about the history of this bakery in my Locally Owned Pismo Beach Eats article (on the Destinations Section of ETG). 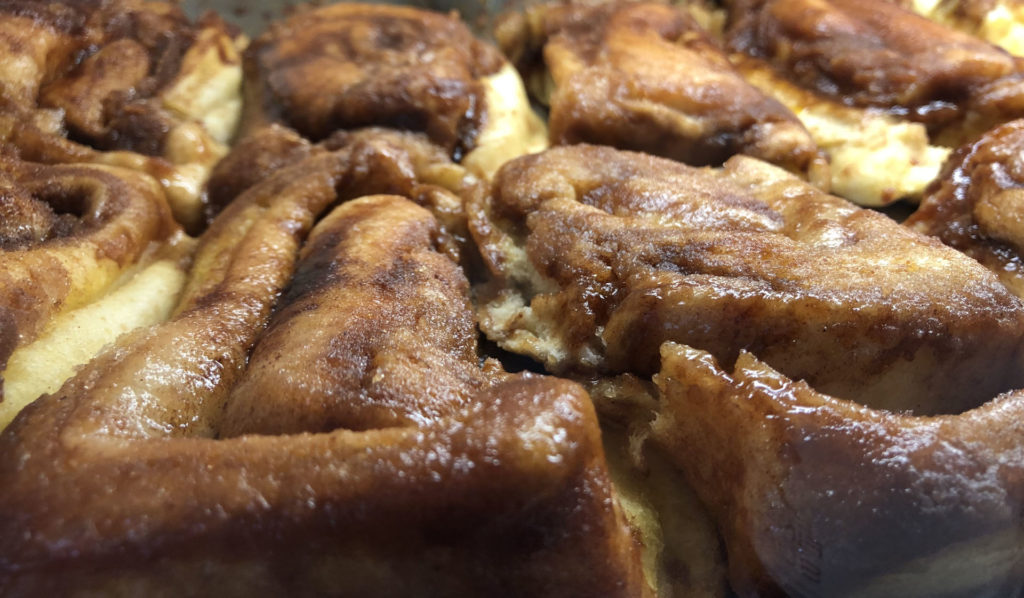 The following day, we lounged around the pool, took a walk on the beach, and then headed back home to our busy lives in Los Angeles. If you are headed to Pismo Beach, I highly recommend the SeaCrest OceanFront Hotel. Find out more about this hotel HERE, on the Destinations Section, under the U.S. drop-down on the Lodging Page.

We had a magnificent weekend. We were both so glad that we extended our trip and took some time to recharge and reconnect. Life just keeps flying by a hundred miles a minute…so hang on tight to your loved ones, and take some time for yourself…I’m sure glad I did!