Earlier this year, I notched an item off my bucket list – I attended the storied New Orleans Jazz & Heritage Festival. The annual event which returned this year for the first time since 2019 is one of the world’s greatest cultural celebrations and has long been referred to as Jazz Fest by performers and attendees alike. One of the many highlights of the festival was the closing set by Trombone Shorty. The closing slot on the final day of Jazz Fest has always been a sacred moment. Days of music, food, and crafts culminate in one high profile set from a quintessential New Orleans artist.

In the early years of the festival, that closing spot belonged to Professor Longhair. Then, the closing slot honor was passed to another New Orleans powerhouse act — the Neville Brothers who took over and stayed there for almost 40 years until 2012.Since 2013, Trombone Shorty has carried the torch of the powerful last set at Jazz Fest, performing a high-energy set-in front of tens of thousands at the big stage every year, at the end of the day, on that first Sunday in May.

Trombone Shorty has not yet devised a way to take his concert audiences to New Orleans, at least not literally. So, he’s doing the next best thing by bringing New Orleans to audiences nationwide.

His Voodoo Threauxdown Tour 2022, landed at the Hollywood Bowl on Wednesday, August 10, 2022. This is the second edition of the tour, which debuted in 2018. The tour features artists that are all vibrant mainstay of the Big Easy’s famously rich and varied music scene.

With Voodoo Threauxdown, Shorty has assembled a mini-Jazz Fest lineup that provides a zesty sonic gateway for concertgoers who may know little or nothing about Jazz Fest. The lineup structure of the show feels more like a festival than a headlining act with openers, the concert mixed funk, blues, brass, hip hop and more into a soulful recipe that kept most of the e crowd on their feet for almost three-hours!

The Soul Rebels strut their stuff during the Voodoo Threauxdown Tour 2022’s stop at the Hollywood Bowl; photo by Richard Bilow; courtesy of ETG;

For the stop at the Hollywood Bowl, the lineup included The Soul Rebels, Dumpstaphunk, which featured Meters’ bass great George Porter Jr and keyboardist Ivan Neville, Tank and The Bangas with guest vocalist standout Big Freedia and Trombone Shorty and his genre-leaping, 11-piece band, Orleans Avenue.

The first act – The Soul Rebels look like a traditional New Orleans brass band, but their sound quickly slips around any old-school confinements. The 8-piece mixture of horns and percussion can blow and beat with the best of them, but when any one of the horn players drops their brass for a mic and delivers a hip hop verse, tradition is quickly put out to pasture. After a short, upbeat set, the audience was primed for the rest of the night. 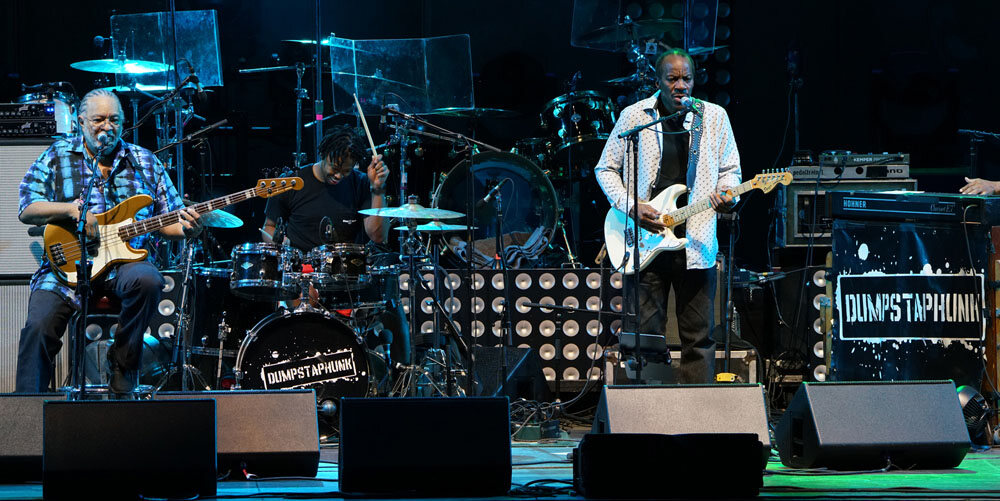 Next up, was the Meters bass legend George Porter, Jr. who was joined by funky powerhouse Dumpstaphunk with Ivan Neville on keyboards. Their set was an homage to The Meters and featured the band’s classics “Cissy Strut”, “No More Okey Doke” and a fiery version of “Fire on the Bayou.”

After the band’s set, the energy level in the Bowl was high, but the energy climbed even further when Tank and the Bangas came on. Their sound is fresh and unique, with a wide range of dynamics that can veer from rock grooves to sleek hip hop beats. Tarriona “Tank” Ball is a fearless, innovative frontwoman who blends a colorful palette of influences into her distinct delivery, and the larger-than-life onstage persona of guest rapper Big Freedia proved an impressive foil to Tank’s own dynamic when she emerged for their collaboration “Betty Bussit”. Freedia has been hailed as the king and queen of bounce music, a uniquely New Orleans-flavored variation of hip-hop that features Mardi Gras Indian call-and-response chants — and lots of twerking.

Tank and The Bangas along with Big Freedia are joined by The Soul Rebels for a rousing version of “Betty Bussit;” photo by Richard Bilow; courtesy of ETG;

Even with three incredible live bands gracing the stage before them, Trombone Shorty & Orleans Avenue made it clear from their opening number that they came to steal the show! The band is an incredible live act, with tightly syncopated horns, shredding guitar licks and soulful backup singers all weaved together over a deep groove laid down by the impeccable rhythm section.

While the band leader’s chops and showmanship were extensively highlighted, every musician onstage had their time in the spotlight, from tenor saxophonist BK Jackson’s searing solo in “Ain’t No Use” to the bass and trombone duel leading into “Craziest Things – One Night.” The group hardly let up for a second, With Trombone Shorty yelling “I’m not ready to be done” before launching into “Come Back.” For the finale, Trombone Shorty invited the Soul Rebels back out for the classic “When the Saints go Marching In” for a true New Orleans farewell.

No matter where you live, or happen to be visiting, if you find Trombone Shorty & Orleans Avenue scheduled to perform, you won’t want to miss it. https://www.tromboneshorty.com