Los Angeles has attracted high profile art fairs which take place each year. Here is my review of the 2019 LA Art Week. 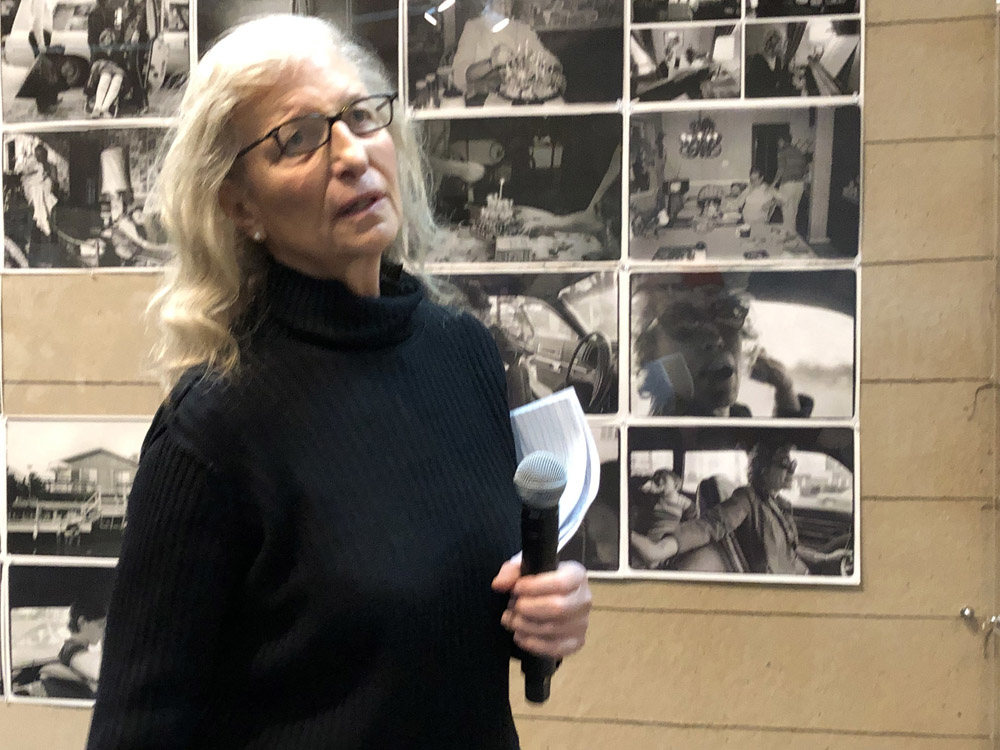 LA Art Week began on Wednesday, February 13, 2019. It was a rainy day…an unusual occurrence in La La Land. However, it did not stop me (or any other writers/collectors for that matter) from getting up early to cover new exhibitions and art fairs happening during a busy week. After fighting rush hour traffic (from the Westside), my photographer and I arrived at Hauser & Wirth Los Angeles in downtown LA for a 10:00am preview of “The Early Years, 1970 – 1983: Archive Project No.1,” by Annie Leibovitz. Be sure to read my full review about this exhibition on our sister site LAArtParty’s Exhibition Reviews drop-down (under the Artist/Exhibition Page).

I was honored to have caught an early glimpse of this quintessential exhibition, and overjoyed to have met this legendary photographer. It made for a more pleasant drive through the slow-moving rainy traffic to Santa Monica’s Barker Hangar for the preview of Art Los Angeles Contemporary.

THE HOLE at ALAC; photo courtesy of the gallery

Upon entering the hangar with its tall vaulted ceilings, we were greeted by vibrant energy, with collectors bustling up and down the aisles. Kathy Grayson, owner/director of THE HOLE (NYC) has exhibited at ALAC for the past eight years. “Obviously the fair has improved enormously over the past eight years, it started out scrappy, and of course so did we. This year we did a big sleek solo booth instead of our usual thematic booth crazy concept install. Had great success there, though didn’t fully sell out, we were close!”

To celebrate the tenth year, ALAC founder and director Tim Fleming brought in Charlotte Walters as managing director and re-vamped the ALAC signature branding, courtesy of Brian Roettinger. Featuring over sixty galleries, the venue was divided into two sections: “Salon” and “Publishers.” The salon was beautifully curated, and the latter (Publishers – dubbed “Moveable Types”) featured numerous book shops from across the globe. There was also a small room titled “The Academy,” organized by Berlin-based curator and former gallerist Claudia Rech. As always, there were many LA galleries although some consistent exhibitors were not present. Instead, I spotted them at Frieze. 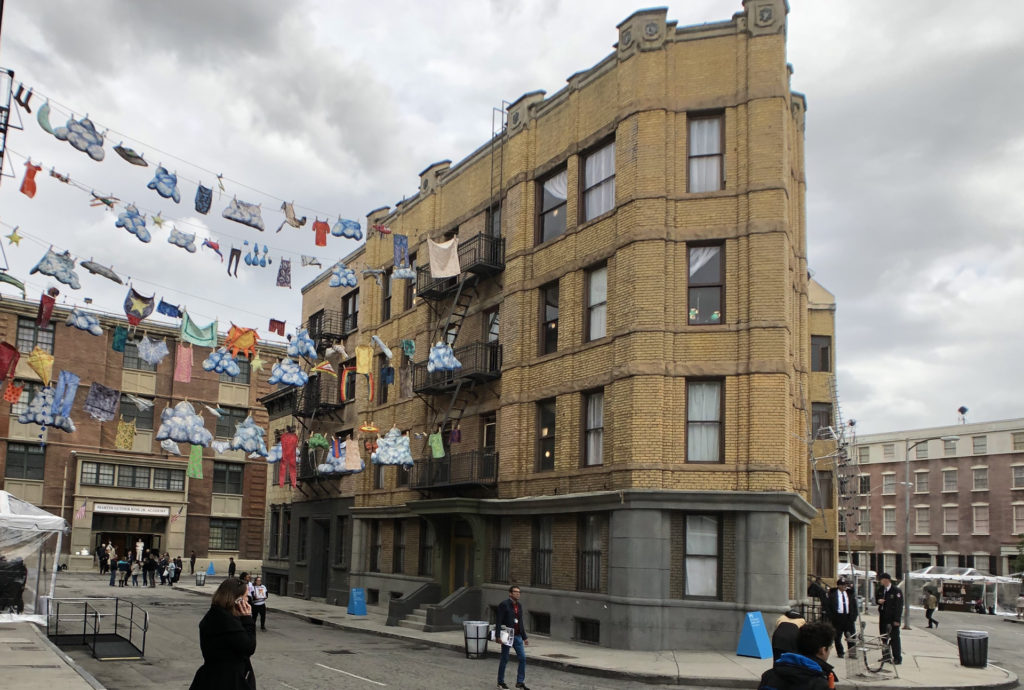 Frieze, on the Paramount Backlot; photo by Rich Bilow; courtesy of ETG;

One cannot say enough about hosting an event at the Paramount Studios lot. Frieze Los Angeles did live up to the hype…the venue added to the experience by becoming an exhibitor unto itself. The New York stage offered nooks and crannies for curator Ali Subotnick to feature a broad range of performance art, installations, etc.
Featuring over seventy galleries, the much anticipated LA debut also featured film screenings and talks, along with off-site satellite events. Bettina Korek, the fair’s newly appointed Executive Director, and Victoria Siddall, (Director of Frieze Fairs) did an exceptional job of arming a global fair with both an overall elite cultured look, while incorporating a lowbrow artist/curator run element which included performance art, and gritty installations. 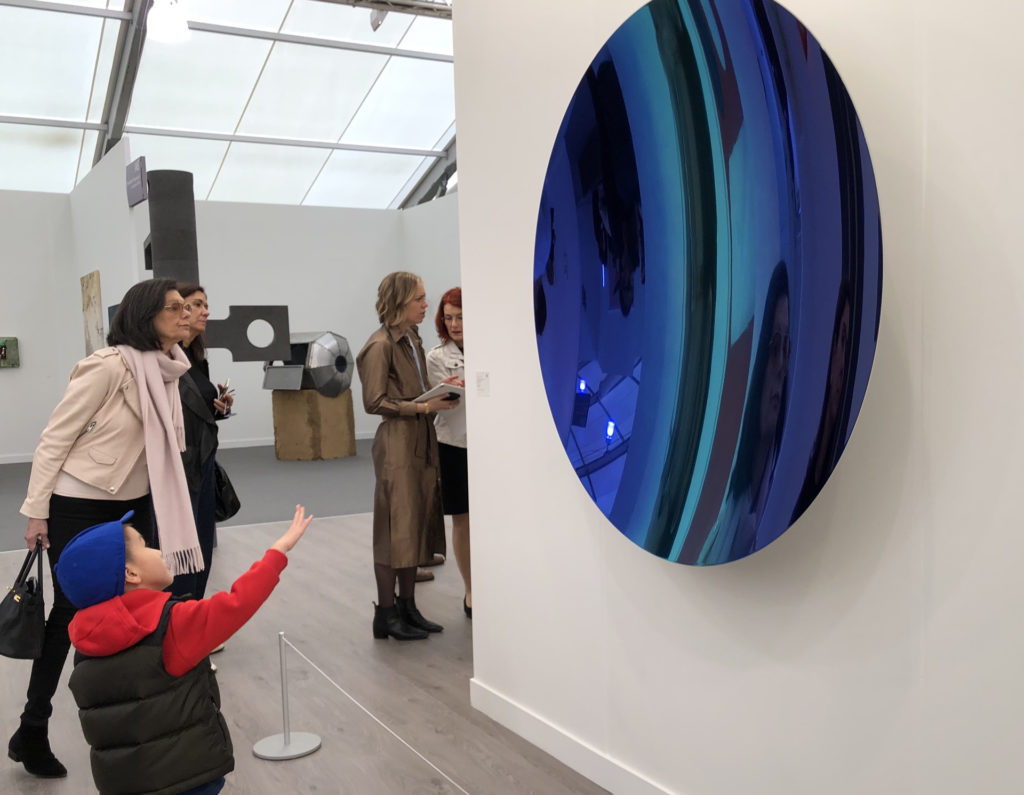 The main gallery was chock full of high-end galleries featuring exceptional work. My favorites included Blum and Poe, LA Louver, and Lisson Gallery (see photo above). I can personally attest that many of us from the LA art community are looking forward to having Frieze Los Angeles return again next year. 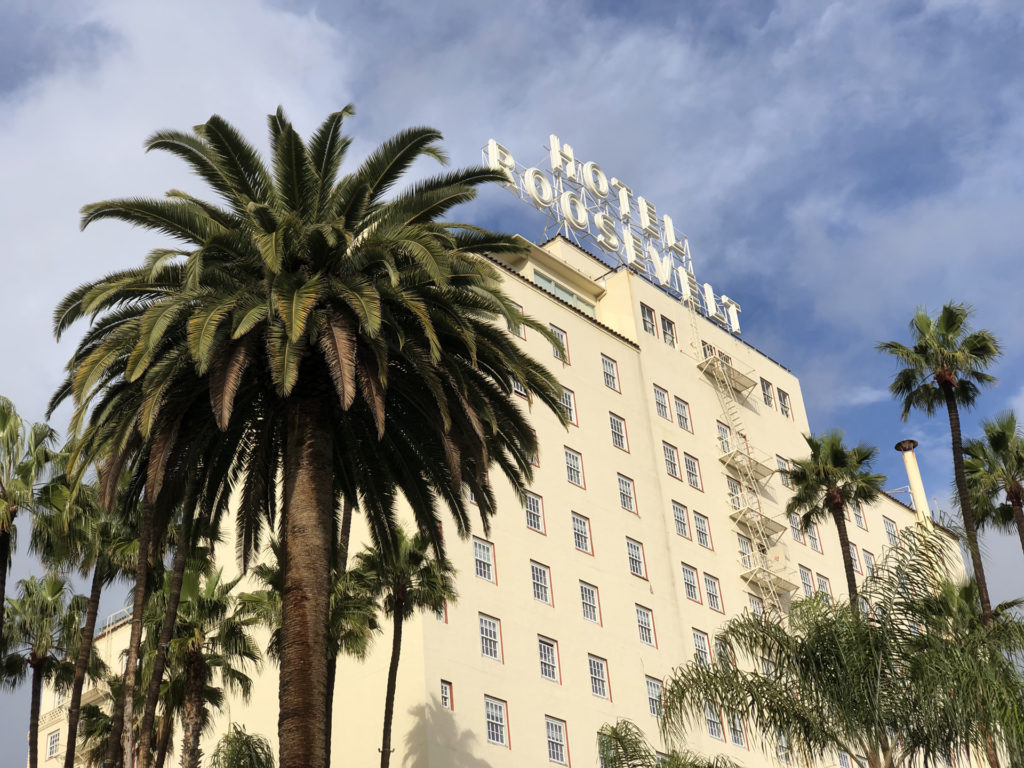 The fair achieved just that. Presented at the famed Roosevelt Hotel, the art fair was free to attendees (an unexpected bonus for art lovers) and showcased a diverse collection of forty or so galleries and curators throughout the top floors of the hotel as well as the poolside rooms (on the main floor). It was well attended…there were lines out the door. I especially enjoyed an exhibition presented by the French Committee of Art Galleries on the 13th floor. Sales rep Zoe Weinberg graciously took me on a walk-through of this stunning exhibit curated by Andrew Berardini. Many local galleries such as M+B Gallery Nino Mier Gallery, SUSANNE VIELMETTER LOS ANGELES PROJECTS, etc., participated as well as national and international favorites. 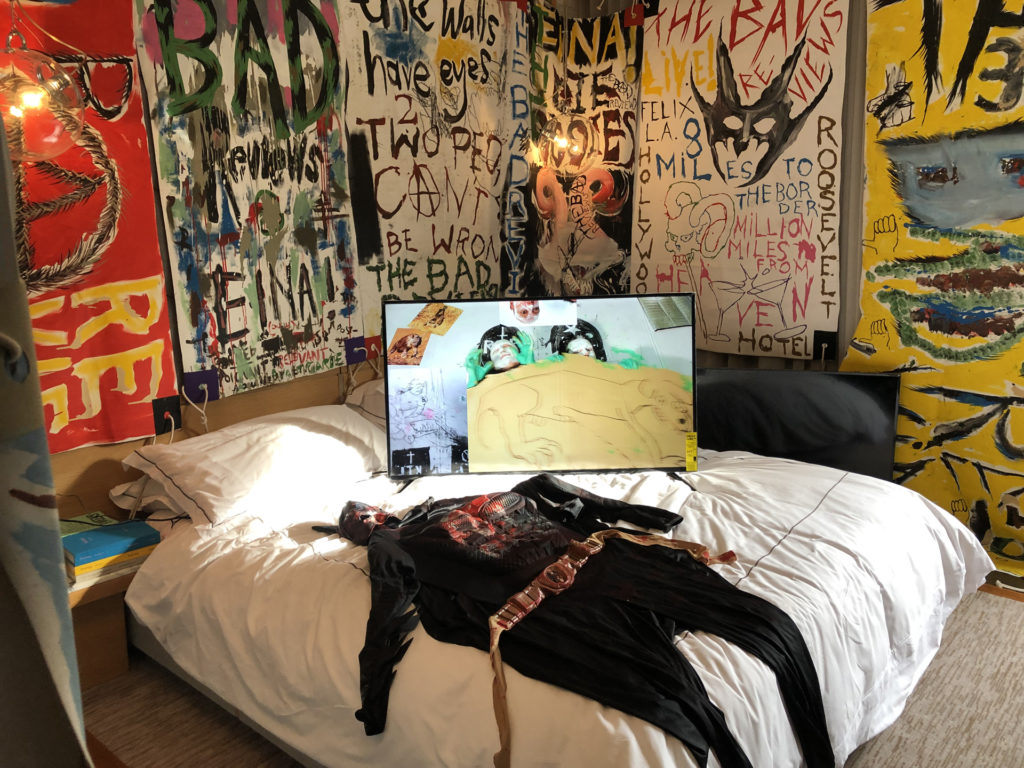 Gallery Director Marc Barben explained, “For this presentation we showed their music videos, band merchandise, and stage banners.” Stevenson is owned by its eleven directors and has two gallery locations in Cape Town and Johannesburg.

Spring Break Art Fair also made its debut in Los Angeles. Presented by co-founders Andrew Gori, and Ambre Kelly, the art fair is known for choosing unusual venues and hosting Independently organized exhibits. The event took place at the Stalls at Skylight ROW DLTA (in 32 former produce stalls). This was the first time this downtown venue hosted an art event.

Artist and curator Nicole Nadeau organized her own booth/stall featuring her work and another artist (Shelter Serra), and also exhibited an outside installation (see below photo). 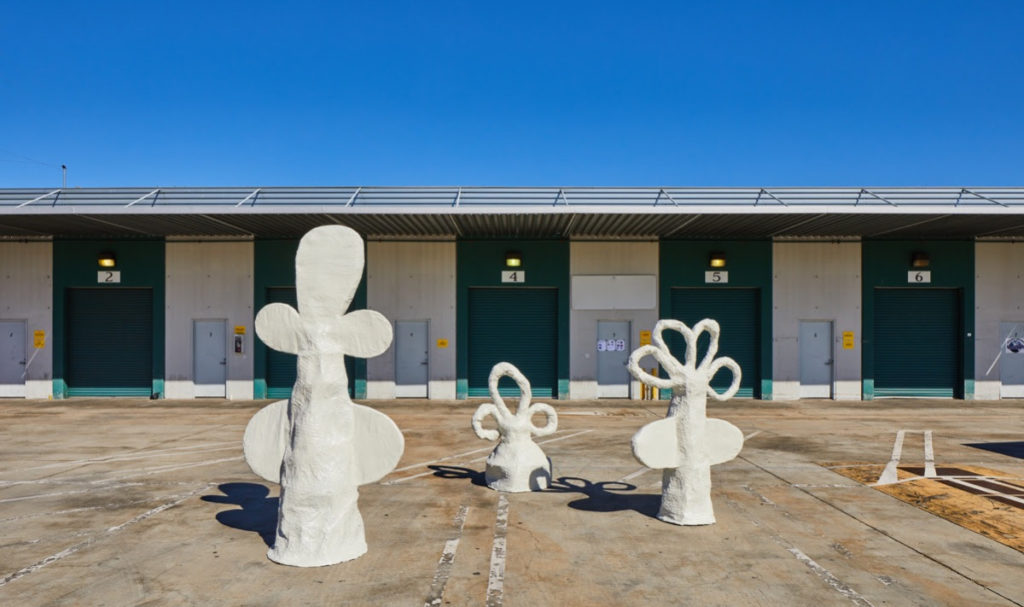 A Flower by Another Name (Fiberglass), by Nicole Nadeau at the Spring Break Art Fair

“I have shown with Spring Break in NYC twice and love the fair,” said Nadeau. “It’s celebrated as a favorite fair by many critics, because of its fresh nature, they also show in very unique spaces. The year I was involved in NYC we were at the old post office in Penn station…that was phenomenal.”

In 2018, Eva Chimento (Chimento Gallery) partnered with Kimberly Light to form E.C.LINÁ. This is the first art fair for the new gallery. “Spring Break was absolutely amazing,” said Chimento. “It brought back a comfortable community of art lovers. The owners of this fair are incredible, they made it very easy for everyone.” 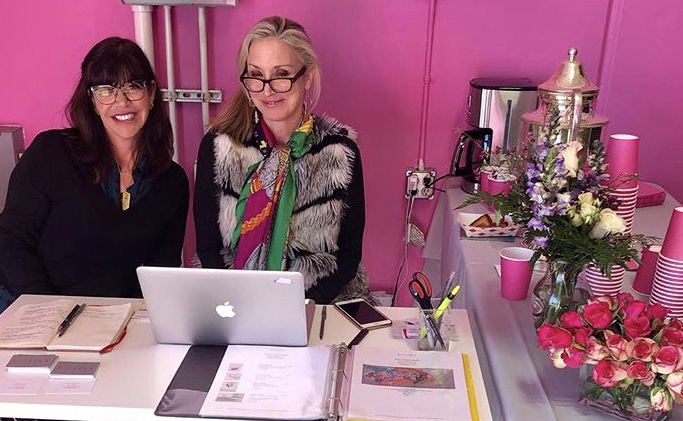 Another downtown art fair, new to LA…Superfine! Art Fair was open to galleries, artists and curators who came to set up work at Magic Box at the Reef (downtown). The fair offered an eclectic array of work. Co-founders Alaia Parhizi (artist) and Aidan Nelson (entrepreneur) recently opened Wonzimer in Korea Town and this was the first venture out into the art fair world.

I spoke with Aidan Nelson at the event. “We are an art gallery however, but we host music and fashion events as well. We host an intimate space where a diverse network can come together for the appreciation of all art mediums.” Nelson pointed out that the co-founder of the gallery is from Switzerland, and the name comes from the German translation of living room. 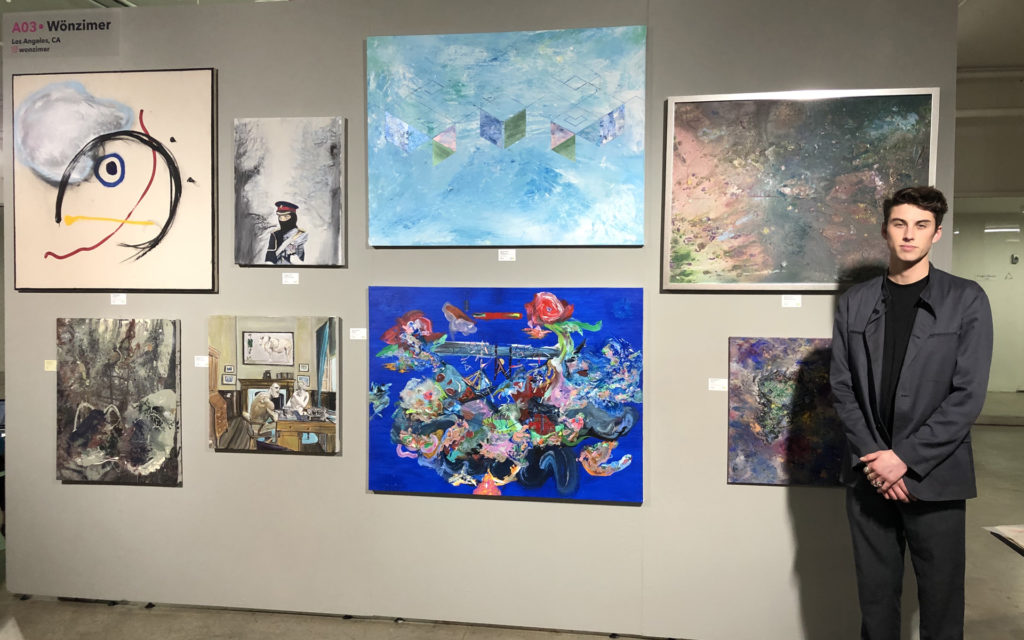 Superfine! Art Fair’s co-founder and director Alex Mitow said “LA has an incredible and thriving art community already, so it’s been great to both highlight local artists and bring national and international artists to the attention of the locals here. It’s definitely exceeded our expectations and we’re already excited for next year.”

Returning to LA, The Start Up Art Fair featured a variety of unrepresented artists. Wendy Ackrell resides in San Francisco, exhibited her paintings along with fiber art (woolen sculptures). When asked about the fair, she replied, “I thought it was a great experience and am so glad I did it.” 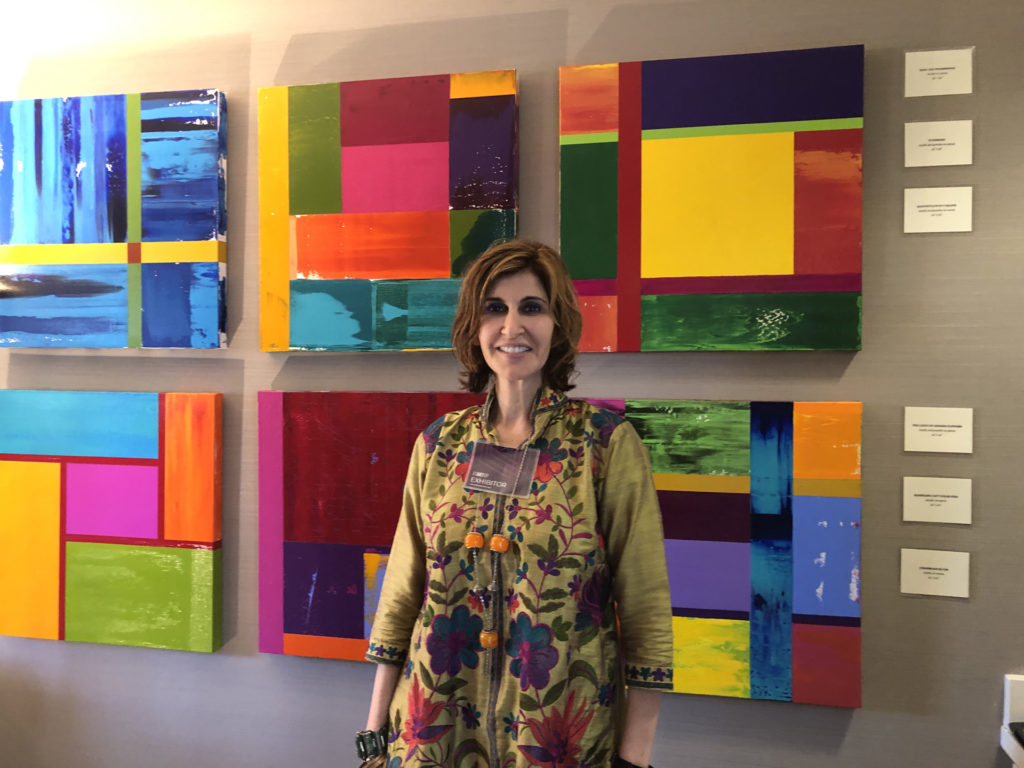 Wendy Ackrell at the Start Up Art Fair; photo by Kathy Leonardo

I also enjoyed the work of Paul Westacott, Amanda Triplett, Jennifer LaPierre…just to name a few. Also held in a hotel (The Kinney, Venice Beach), the Start Up Art Fair began originally began in San Francisco, and presented its fourth LA fair this year.

Coming off the success of its LA/Miami Art Show (just a week earlier) AC Gallery in Hollywood presented its 2nd iteration of Art in LA Affair. Artist Brayden Bugazzi did some live painting at the opening art party. The artist’s multimedia works were featured at Superfine! Art Fair as well. 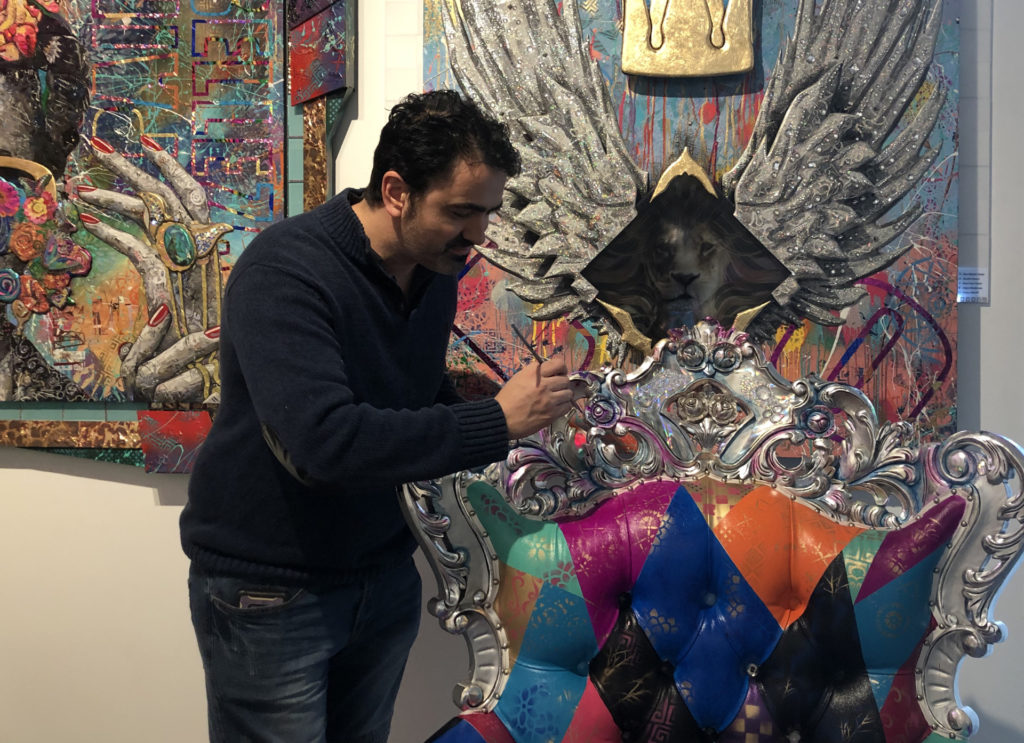 Brayden Bugazzi, in front of his work, live painting at the opening night of Art in LA Affair; photo by Kathy Leonardo

It was a fantastic week of art with several additional events jumping on the bandwagon. There were too many to mention, but here are some of my top picks. Gemini G.E.L. hosted an all-day open house allowing a behind the scenes peek at its printmaking facilities, along with a new exhibition titled “Local: Gemini G.E.L. Collaborations with Los Angeles Artists.” Rema Hort Mann Foundation held its annual benefit auction downtown at WERKARTZ to raise funds for its grant programs. Regen Projects (who also participated in Frieze), offered a unique off-site exhibit titled “Doug Aitken: Don’t Forget to Breathe” in a 20,000 square foot vacant storefront space (just down the street from the gallery). 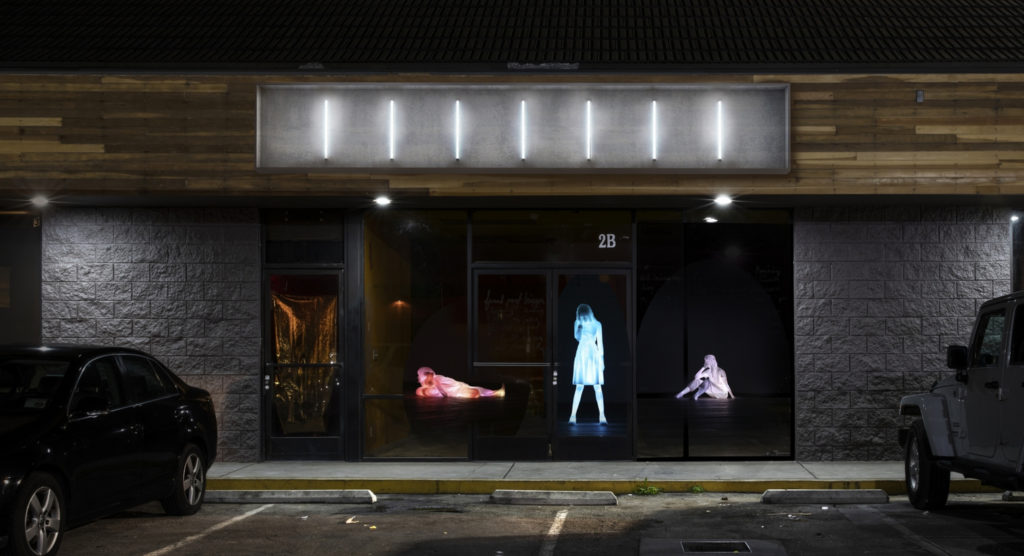 Although I did attend last year’s Art Palm Springs, which was fantastic (honoring the late Ed Moses and his talented son Andy Moses), I was unable to make it this year. Joe Goode represented by Peter Blake Gallery was honored at this year’s fair…one of my staff attended and said it was a wonderful event.

Remember to check our sister site LAArtParty.com for additional info on all types of art events, including art fairs.