The late Ed Moses (1998) made a huge impact on LA’s art scene. He continued to create art with the help of his assistants until his death at ninety one years of age. 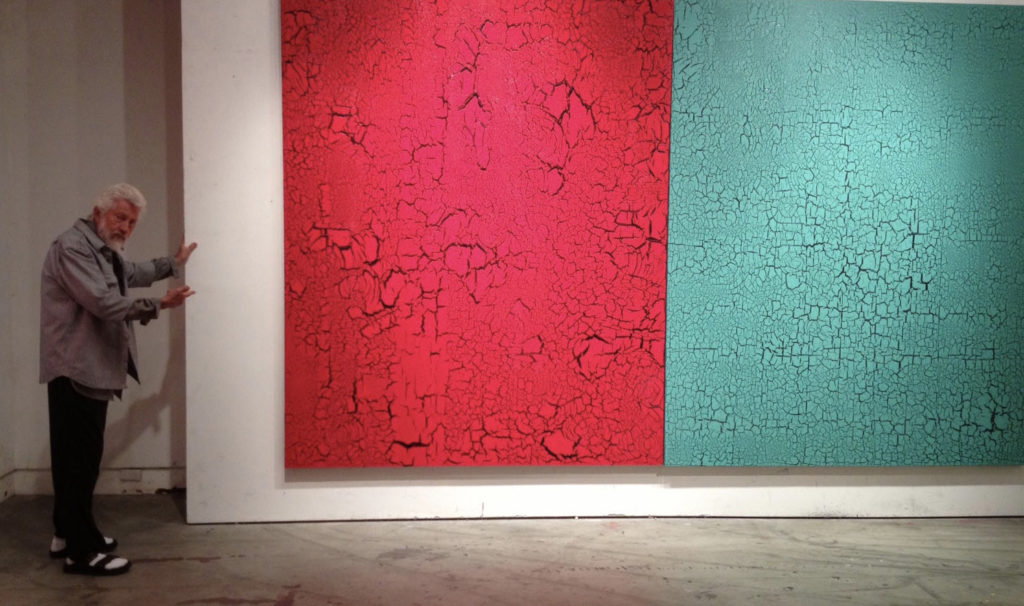 In 2012, when he was eighty six, I had the privilege of interviewing the iconic artist. What I thought would be one meeting turned into a series of dinners and eccentric happenings. I remember one event, I sat between Ed and Larry Bell, another was dinner out with Peter Goulds (LA Louver) and Nancy Keinholz, among other Hollywood insiders.

Ed was known to quite the ladies man. To set the record straight, this was a strictly platonic relationship…after all he was the same age as my father. Catching an inside glimpse of his world was an unexpected coup for any writer. Ed has left a lasting impression on me. I still giggle when I think of him. 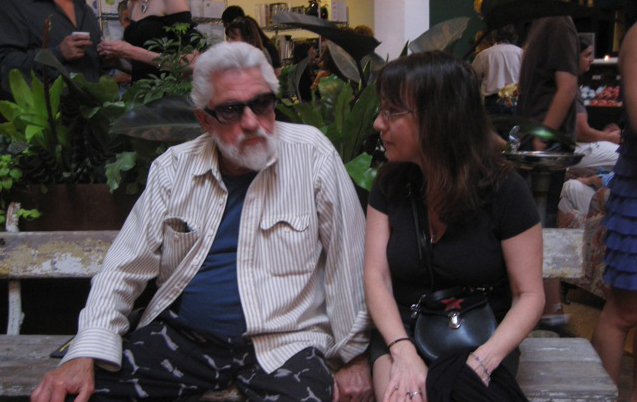 Ed Moses and me; photo by Greg Dahl

This article was published in December of 2012 in the Santa Monica Mirror. This is one of my most popular articles – I still receive emails to this day about it. I hope you enjoy my  interview.

ying along Abbot Kinney Boulevard to meet the legendary artist Ed Moses for dinner, I caught a glimpse of him casually strolling down the street. As I drew closer, I couldn’t help but notice people stopping to say hi, some ever so briefly while others lingered to chat. Ed took a moment with each of his admirers before entering the restaurant.

For more than 50 years, Venice has been home to the abstract painter. He is a fixture in Venice… a treasure… an icon. At 86, Moses is at the top of his game. As prolific as ever, this renowned artist recently enjoyed a successful opening at Patrick Painter at Bergamot Station. His latest exhibition “The Crackle Paintings” is a testament to his unequivocal legacy. His new series is unabashedly bold…subtle, yet explosive. 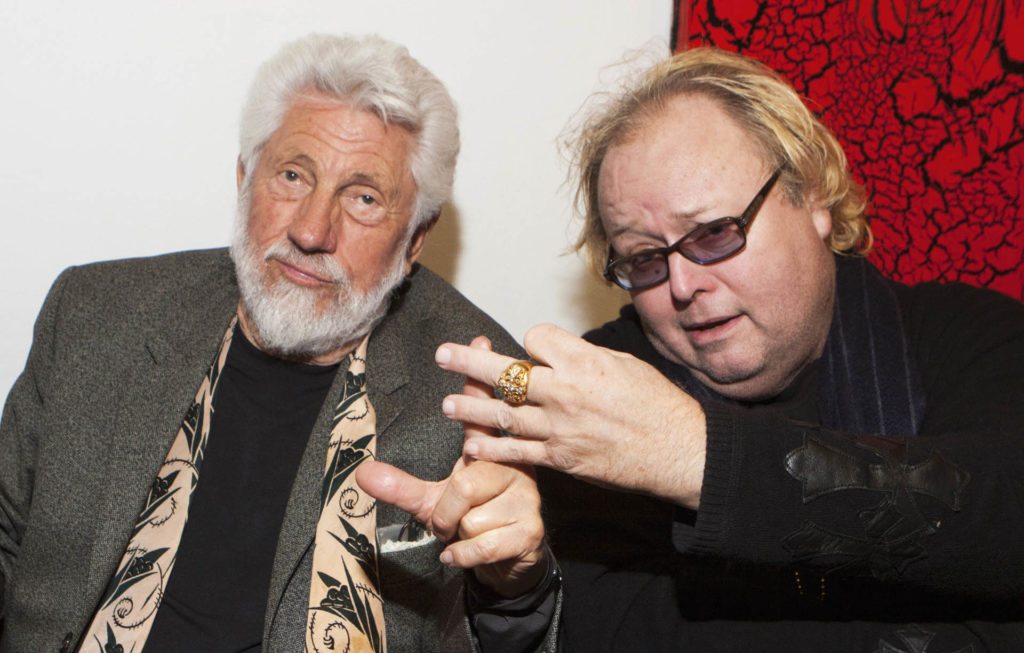 Entering Hal’s Bar and Grill he is immediately recognized by the hostess who escorts us to our table. The art of Ed Moses is currently gracing the walls above us. Several customers acknowledge him with a nod, and our waitress comes by to warmly greet this charming gent. Co-owner Don Novack stops by our table, and they chat briefly about the new work due to be installed at Hal’s.

When asked if his work has changed over the years Ed replies, “I never change…I mutate. In other words, one series of paintings comes from the proceeding series of paintings. And that goes on and on and on,” he says. “So I don’t work within the scope of having an idea and then executing the idea. I just muck about.”

Moses has two assistants that stretch and prepare six to eight canvases a day. “I find something that’s interesting by mucking about… not knowing what I am doing… not knowing where I am going and having a strange remembrance of things past,” he says. He reminisces back to 1968 when he asked himself the big question, “What are you doing Ed?” He continues, “That’s when I realized I wanted to leave evidence that I have existed.” 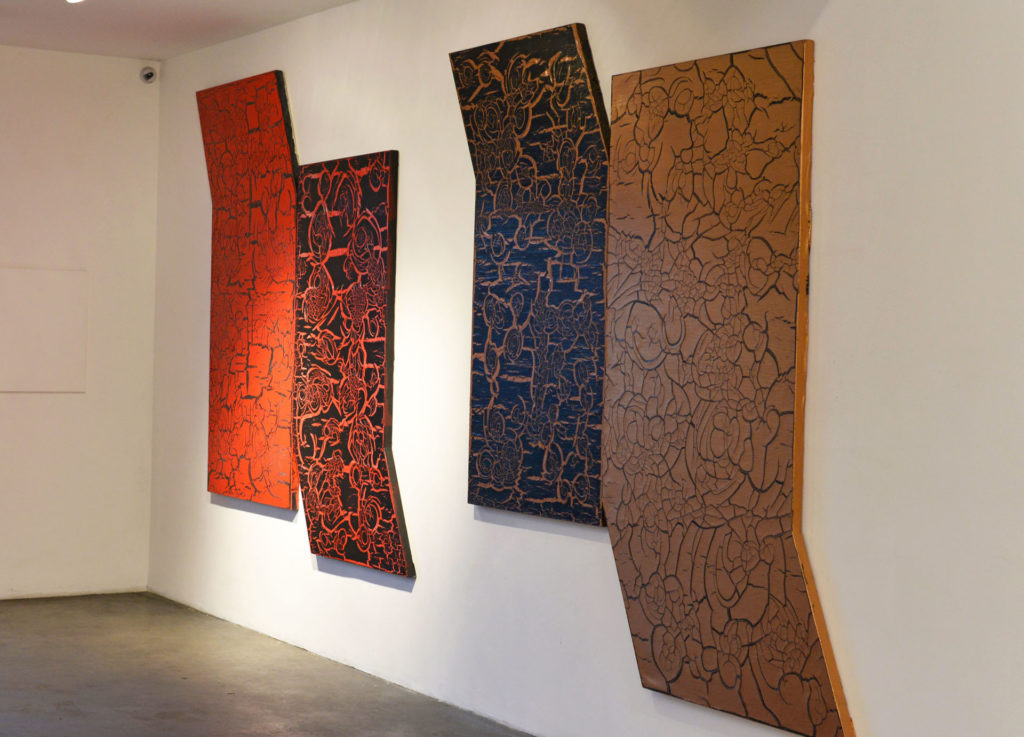 Originally known for his involvement in the prestigious Ferus Gallery, Ed talks about his past exhibitions. When asked if he has ever in his long career been afraid to try something new, he  responds, “I have said this before and I will say it again, I’m not afraid of anything; I’m terrified of everything. So terror is my constant companion.”

Enjoying the work of Picasso and Pollack, Moses insists that he is not trying to tell a story with his paintings. He muses, “I make most of my discoveries by falling on my head.”

After we finally part ways, I run into Don Novack who tells me that just last week an art tour of MOCA patrons happened to be having lunch at Hal’s when Ed Moses came in for lunch. “They were so excited,” he laughs. “You would have thought God had walked through the door!”