On a laid back memorial day weekend I participated in an early (Pacific time) wine/cooking zoom event. The Vero talk took place online – live from Romagna, and was led by Chef Riccardo ‘Raggia’ Severi and Davide Castagnoli, owner of Braschi Boy Winery.

Vero founder Sheila Donohue was on the East Coast, with some family in West Hampton. I was joining on the West Coast in LA. Sheila had a personal connection with Riccardo. Several years back, she was a runner up for Master Chef Italy, and Davide introduced her to Riccardo, who taught her how to plate dishes. She will be forever grateful to Ricardo for teaching her this important technique. 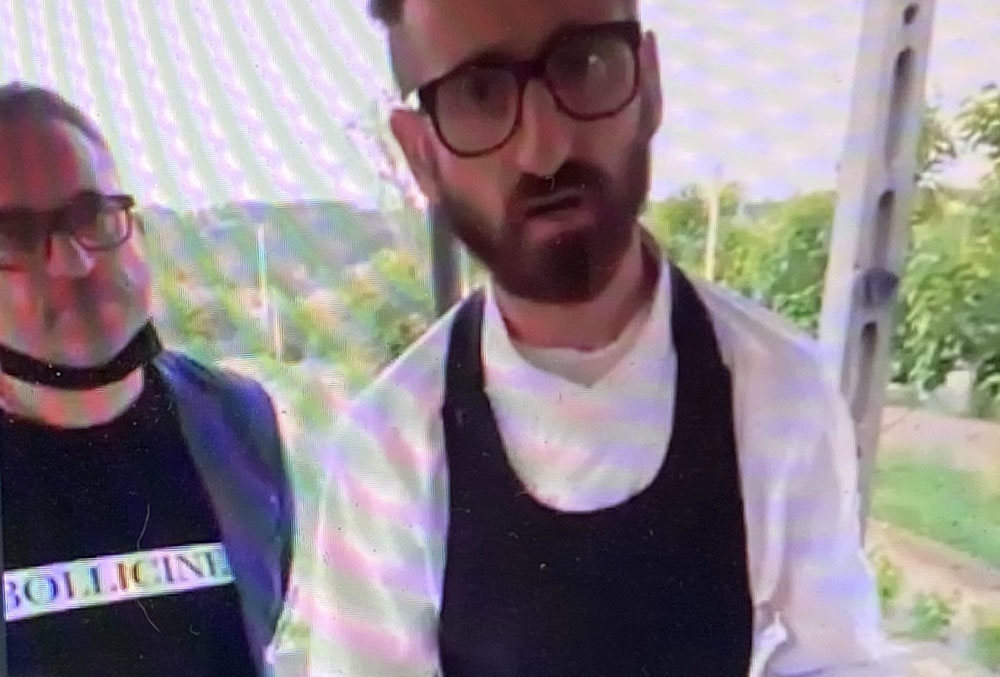 The event featured three Braschi wines and streamed live from Riccardo’s garden in Cesena, Romagna, Italy. Although he does not speak English, Sheila did a great job translating. Of course Davide helped with translation as well as adding his knowledge of both wine making, and the historic region.

Riccardo’s grand parents were farmers in Romagna which is known for its agriculture. He ultimately returned to farming when he lost his chef job due to the pandemic. Now he has been experimenting with his garden, and how he incorporates these fresh ingredients into his cooking.

Riccardo told with us that it is a tradition that the farmers would share a glass of Sangiovese out in the field. Another popular part of Romagna culture, is to greet guests with a glass of wine. We all agreed, this was a great custom. Costone Sangiovese Superiore had a fruity nose and a smooth, round cherry flavor. Although I am used to starting a tasting with white wine, I must say, it was a delightful way to kick off the event.

Riccardo took us on a tour of his garden, showing us his crops, cherries, apricots, beans, potatoes, asparagus, zucchini, peas, and onions (which would later be used in his dishes). 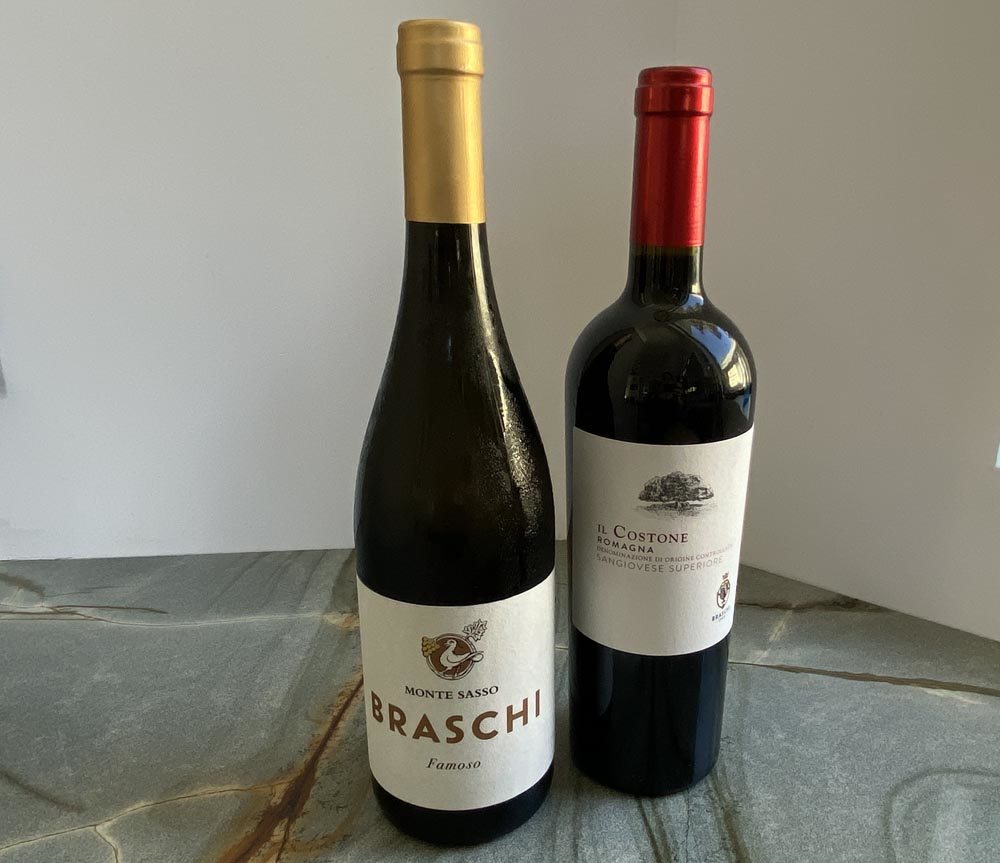 The first two wines from Braschi; photo by Kathy Leonardo

The cooking began…Fava (Lima) beans were used with a pungent cheese called formaggio di fossa which is considered a pecorino cheese. The duo explained that the formaggio di fossa is aged underground (a tradition from a local town in Romagna). Elaine Januszewski who lives in Italy (Emilia, the western part of Romagna) also helped with translation. She clarified that the cheese is fermented below ground in a pit surrounded with hay. A fondue was created topped with a tart cherry sauce and the fava beans. This is a perfect aperitivo to be paired with the Monte Sasso Famoso White Wine.

The Famoso has a unique story behind it…a farmer had fantastic results while making wine with this specific grape that had been found on his vineyard. He was unsure what it was, so in 2001 he had it tested, and found out that the grape was originally thought to be extinct. Fortunately for us, this was re-discovered. The Monte Sasso Famoso White Wine is floral to the nose, offering a dry smooth wine high in acidity, with the delicate taste of apricots.

The second dish (another small bite) translated to “An Egg with a shirt” and was made by the Benedict monks. This was the origin of Eggs Benedict. Cheese and bacon added to the dish is paired best with the white Famoso dry white wine.

Next, we would taste the Albana Sweet wine. I prepared my own snack ahead of time – some cheeses to eat while I sipped on my wine. A mushroom brie and a manchego went well with all of the wines.

The third dish was to pair with the Albana, which featured apricot jam…made fresh from his garden. Sheila told a story about how she was first introduced to squacquerone cheese while in Romagna. This unique cheese offering a soft consistency was used in this traditional Italian dish which was given to children as a snack. The squacquerone is spread on bread, with homemade apricot jam, along with thin slices of apricots with radish leaves placed on top. Januszewski pointed our that the Radish leaves which are peppery bring a nice contrast to the sweetness of the dish. This was the perfect pairing to accompany this luscious sweet wine.

Sheila recounted a story…Around the 5th century a powerful woman (an Empress) became the acting Roman Emperor for a short time while she stood in for her son, who was too young at the time. She loved this wine…she said it was like drinking gold. The straw color come from the thick skinned grape. This also has a high acidity and is a works well pairing with food. The Albana Dolce is something I’ve never quite tasted. I am not a sweet wine lover but this was lush with fruity with orange notes.

Visit Vero to purchase all of these wines, and read about the unique history of the vineyard, and its grapes – https://www.verovinogusto.com/braschi-romagna-wines