New York City is a mecca for the arts. The city, and its public art has been blessed with the talents of Los Angeles artist Alison Saar. When visiting New York, you will want to view the astounding works by the artist. Saar’s Feallan and Fallow is a six-piece installation featured at Madison Square Park located in the Flat Iron District (runs from Madison Square Park to 18th street). Located in Harlem (122 Street and Frederick Douglass Boulevard), is the bronze sculpture of Harriet Tubman – more info below. Alison Saar is represented by L.A. Louver.  Visit the Stories section of ETG, under the Art Talk dropdown, on the Arts Page or CLICK HERE to read a Q & A with L.A. Louver’s Founding Director Peter Goulds. 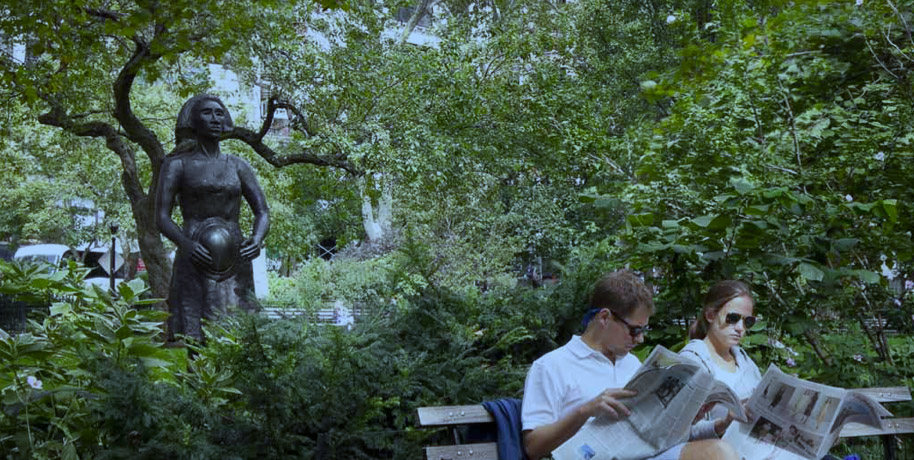 The sculpture Summer located in Madison Square Park in NYC is part of Alison Saar’s Feallan and Fallow, a six-piece installation; photo courtesy of the artist and L.A. Louver

You can find Feallan and Fallow, a six-piece installation in Madison Square Park. Scattered throughout the part, four of the works depict the seasons (2011). Two two of the artist’s Treesouls (fourteen-foot-tall figures with legs of roots) created in 1994 round out the series. Inspired by the Greek myth of Persephone, Saar’s  Feallan and Fallow takes visitors on a journey through the four seasons. You can find more info about this exhibition HERE or on the website https://www.madisonsquarepark.org

The artist has depicted Tubman “not as the conductor of the Underground Railroad but as the train itself, an unstoppable locomotive,” the roots of slavery pulled up in her wake. Saar designed stylized portraits of “anonymous passengers” of the Underground Railroad in Tubman’s skirt, some of which were inspired by West African “passport masks.” Around the granite base of the monument are bronze tiles alternately depicting events in Tubman’s life and traditional quilting patterns.

The $2.8 million, multi-agency project, which included the landscaping of a formerly barren traffic triangle, was sponsored by former Manhattan Borough President C. Virginia Fields. Designed by Quennell Rothschild and constructed by URS, the renovated triangle features paving blocks and roughly hewn granite to create a natural setting. Plantings native to both New York and Tubman’s home state of Maryland represent the woods and terrain traveled by Tubman and her Underground Railroad passengers, providing a contemplative space in which to consider Tubman’s legacy. 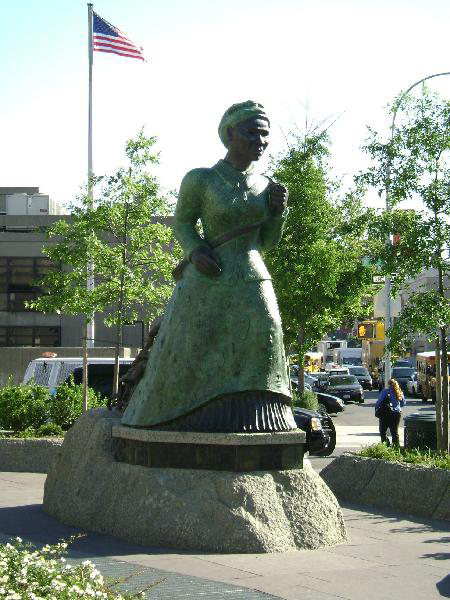